After seven seasons, "Rescue Me" ends with a cough and a smile

The final episode of FX's firefighter drama plays to the series' strengths, and springs at least one major surprise 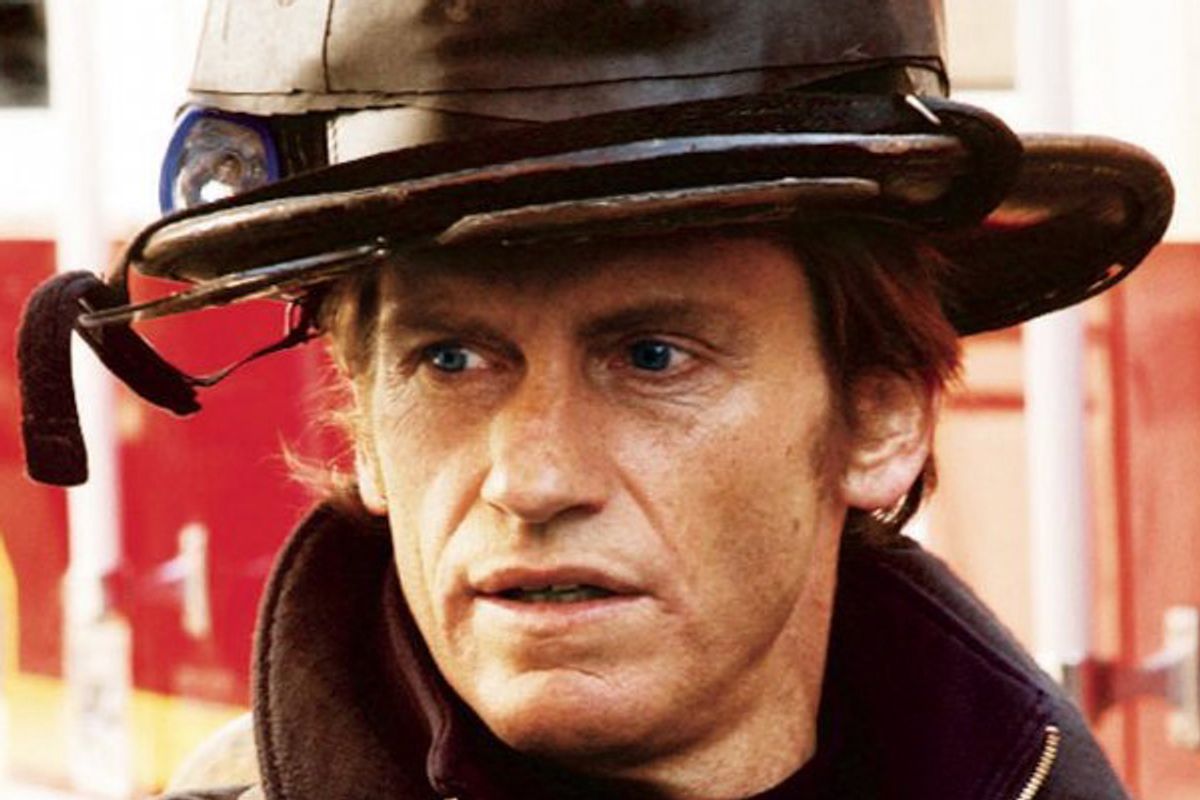 [This article contains spoilers for the series finale of "Rescue Me." Read at your own risk.]

I don't know who made the decision to sync the end of "Rescue Me" to the 10th anniversary of 9/11, but it was a bad one, because it guaranteed that an intriguingly relaxed, sometimes brilliant final season got lost amid the din of remembrances. I didn't expect it to end as strongly as it did. The show's saggy middle stretch -- approximately Seasons 3 through 6 -- was mostly exasperating. Leary and Peter Tolan's firefighter drama had a terrific pugnacious spirit and a what-the-hell, let's-try-it attitude, but it kept succumbing to its worst impulses, to the point where it got lost in its own identity as an "outrageous," "searing," "powerful" drama and just started to seem desperate. How many times would Tommy alienate almost everyone, then make up for it with a spectacular act of heroism? How many horrendous, random deaths and other traumas would he endure before the ghost of "NYPD Blue" death-cursed hero Andy Sipowicz materialized before him and said, "You win, kiddo -- your life is worse"? "Six Feet Under," a series that the death-obsessed, ghost-haunted "Rescue Me" occasionally resembled, had the same trouble balancing rude but droll comedy and out-of-nowhere tragedy, and a similar tendency to go grandiose when a more subdued approach might have served better. And yet it, too, rallied in its last year, building toward a finale whose sentiment felt earned.

I bet history's judgment will be mostly kind to the show, though -- especially the first two seasons, and this closing stretch.  It wasn't always good, and sometimes it wasn't even likable, but it was almost always interesting -- sometimes in spite of itself. It wasn't a complacent series; its idea of great drama could be sophomoric, but it had a restless spirit and a determination to push commercial TV content restrictions as far as they would go, no mean feat in the era of TV-MA programming. The last episode of "Rescue Me," which aired tonight, didn't showcase that side of the program's identity; if anything it went the other way. I love that they started exactly the way you expected them to start -- with a lavish funeral in an immense cathedral -- then revealed that it was just a dream and set the surviving characters down a mostly comic road. Road, as in actual thoroughfare: The image of those squabbling survivors jammed together in a car was priceless. And the decision to go out with a cough and a smile (no ashes-in-the-face gag will ever top "The Big Lebowski") spoke well of the show's instincts. This wasn't a three-hanky special like the "Six Feet" closer. But it was almost as satisfying, and in some ways more surprising because of its emphasis on slapstick misfortune rather than dark-night-of-the-soul emoting.

As soon as the writers introduced that bit a few episodes back where Tommy decided to write letters to everyone he cared about, with instructions that they not be read until after his death, I felt a chill and thought, "Oh, great, they're going to kill Tommy, and the last hour is going to be a bunch of people sitting around talking about how annoying but magnificent and totally worth the trouble he was." But Leary and Tolan didn't go for a pat, star-fucking resolution. That "Tommy is worth the trouble" conversation happened a couple of weeks back in the scene where Lou (John Scurti) went to visit Sheila (Callie Thorne), did the trick with the flaming shot glass, and said that if their firehouse was the Yankees, Tommy would be Mickey Mantle, an obnoxious drunk who was also a a great ballplayer. (Earlier, Lou had been compared to Derek Jeter.) And now you know who bought it in the end: Lou, whose name rhymes with glue -- the guy who held it all together, the guy who spent the last couple of episodes roaming all over the place trying to mend fences that Tommy had damaged or destroyed. This death felt dramatically right; in the preceding few episodes, Lou had become the conscience of the show's extended community of firefighters and significant others (even more so than in the past) and had made a conscious decision to put an admonition by Deputy Chief Sidney Feinberg (Jerry Adler), a Vietnam veteran, into practice: "You want to memorialize somebody, you do it by talking about their deeds."

The killing of Lou also highlighted one of the show's major preoccupations, survivor's guilt. The very first scene in the pilot episode -- Tommy haranguing a bunch of green recruits by extolling the awesome stones of the firefighters who died on 9/11 -- was really about that, even though it was treated mainly as an introduction to the show's world and its ethos. Tommy, Lou, Franco, Sheila, Janet -- pretty much everyone -- was living in a fog of guilt, ashamed of still being alive even if they didn't consciously think of their unhappiness in those terms. I'm pretty sure we only saw Tommy's ghosts, but all the other characters had theirs, too.

I also liked how, as the number of deaths from non-9/11 causes piled up over the years, Tommy kept accumulating new ghosts, to the point where 9/11 receded in the show's narrative rearview. Of course it never went away -- every time the guys walked into the firehouse or looked up at a tall building they probably thought about it -- but over time it became just one source of pain among many.

That phenomenon is normal and healthy, and I'm ultimately glad that "Rescue Me" delved into it, even though it never really dug into another, very interesting related question: Were Tommy and the gang's super-macho antics -- boozing, drugs, fighting, screwing around -- mainly the result of psychological trauma from 9/11, or did the catastrophe just give their existing personalities a monster steroid injection, and gift them with the means and the excuse to become more extreme versions of the men they would have been anyway?

Tommy took a run at this in a conversation with Janet in the season opener, but Janet conspicuously failed to challenge his assertion that most of his current problems were aftershocks from the ordeal in the towers. The subject was revisited again in a scene a couple of weeks ago between Tommy and Lou -- the one where Lou told him that he, Tommy and everyone else who survived that day actually died that day, that they were all just a bunch of walking ghosts. That's a chilling image, but it's also oddly self-flattering -- and self-flattery has always been a problem on "Rescue Me," a series that often seemed to think that copping to its innate sexism, homophobia and racism was the same thing as being honest about it. True, the show's straight guys were all borderline emotional basket cases, and arrested adolescents to boot, but the writers nearly always tacitly endorsed their worldview; women were mostly hotties, nags or crazy bitches, minorities were mostly professional victims and troublemakers, gay men were mostly pleasant but fey and gross, etc. (The racial banter at last week's wedding was supposed to be painful, but it just felt painfully contrived.)

If the show had dared to hammer on the idea that maybe, just maybe, these guys were pretty screwed up anyway -- socially and psychologically -- and were using 9/11 trauma as an excuse not to look inward, critique themselves and make changes, it would have shattered the show's romanticized male self-image. It might also have been viewed as an act of anti-FDNY sacrilege on par with pissing on a photo of the twin towers. Once in a while a character (usually female) would nose around in that sore spot and suggest that, in certain circumstances, at least, 9/11 grief wasn't an explanation for what was wrong in these men's lives, it was an excuse. But the show never followed this train of thought for too long. Lou's "We all died that day" speech, and variants thereof, became the show's official explanation -- and a conversation-ender.

I'm going to miss this series, though. The premiere of "Rescue Me" wasn't the first inkling that FX could have an identity beyond "Kinda like HBO, but with ads"; that was "The Shield." But it was the first, and still one of the few, FX shows that wasn't built around crime, cops, sports or other generic hooks. For all its ludicrous melodrama and "Home Improvement"-style, reductive theorizing about men from Mars and women from Venus -- the group period shtick in "Menses" was especially sitcommy -- "Rescue Me" was committed to living in the real world. Its characters were adults with adult problems.  And over time, Tommy actually, finally grew up. He quit smoking and drinking. The show kept threatening to have him fall off the wagon again, but although he thought about it -- a lot -- he never succumbed, because there was too much at stake. He was tired of having so many people hate him. He wanted to be a grandfather. He finally cared whether he lived or died.

It was always more of a relationship show than an action series. The heroes did visually spectacular deeds, but not that often, and the show made their job seem more difficult than glamorous; like the cliché about being a soldier, their lives seemed comprised of 99 percent boredom, 1 percent terror. Last week's final firefighting sequence was unusually extravagant, no doubt because it was the last one. For the most part the series preferred more compressed, chaotic glimpses of action, scenes that were more often a payoff to a firehouse plot thread than a self-contained, self-justifying spectacle. The philosophical conversations about God, heaven, hell, death and morality were refreshingly plainspoken. The firehouse high jinks and sexual slapstick were often hilariously nasty, as cathartic as a good dirty joke. One of the series' best qualities was its willingness to be silly. This continued through the final season; my favorite touch was when Lou read the false farewell letter from Tommy that revealed that there were red velvet cupcakes stashed under his bunk. As Tommy's clipped snarl filled the soundtrack, the episode staged a wonderful, verging-on-"Airplane!" sight gag: Lou dropped the letter and ran to get the cupcakes, and the camera settled on the letter lying there on the floor; there was nobody in the room, but Tommy was still talking.

The show's very last scene was perfect: Tommy reaming out a new bunch of recruits, then driving away from the scene, the camera craning upward to reveal the skyline of lower Manhattan. The towers will never return. Life goes on.