Fiction can't give Sept. 11 meaning -- or make those 3,000 violent deaths more significant than any others 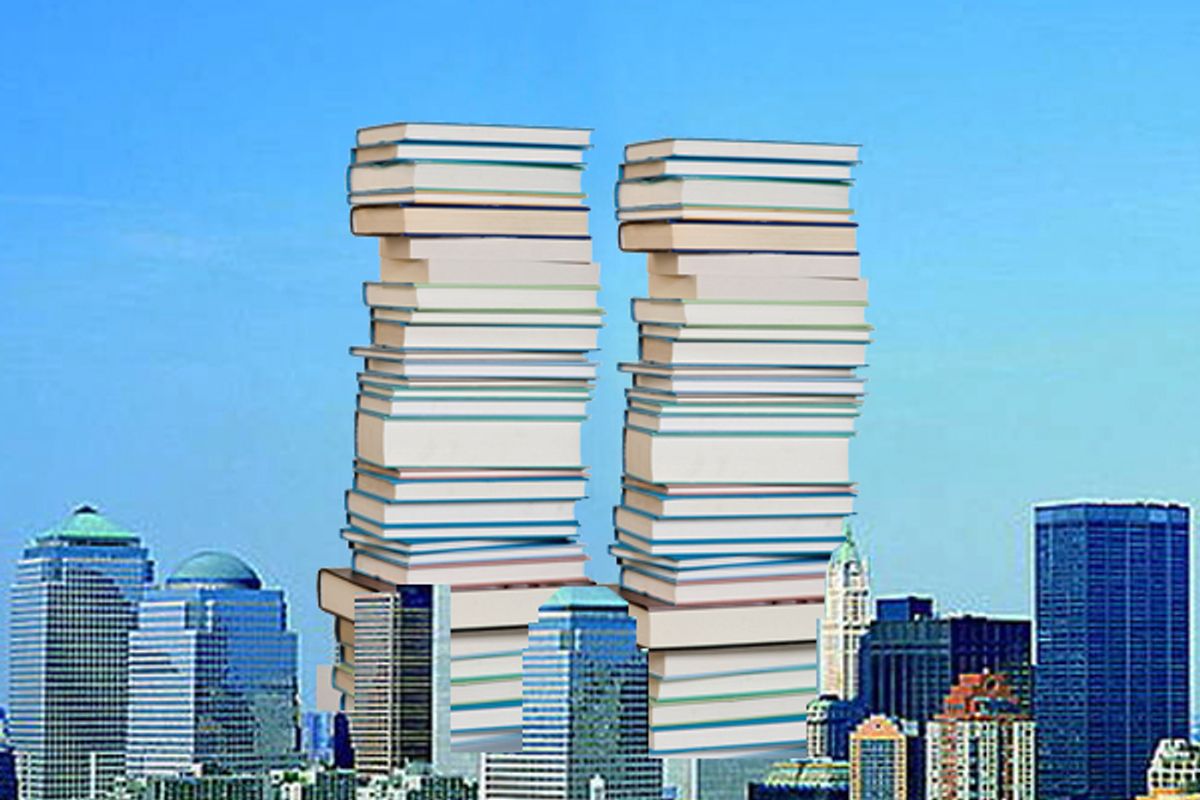 In the 1990s, the haute-postmodern novelist Don DeLillo liked to say that the terrorist had supplanted the novelist in cultural importance. "Not long ago, a novelist could believe he could have an effect on our consciousness of terror," he told the New York Times Book Review. "Today, the men who shape and influence human consciousness are the terrorists."

It was the sort of stylized, mandarin pronouncement that seemed terribly sophisticated at the time, although if you thought about it for a bit, what did it really mean? There's a lot more to consciousness than fear, and even name-brand terrorists like Timothy McVeigh and Theodore Kaczynski go down in history as lethal crackpots, not transformative figures. Harriet Beecher Stowe they are not.

But surely 9/11 was a special case? An attack so catastrophic, with such a high death toll and striking so hard at the root of American complacency must have unique import, a significance that, in turn, only novelists have the power to address at length and in depth, with the intimate imagination that fiction is uniquely suited to employ. Right?

That, at least, is the idea that perceptibly impresses itself upon every novel set in or after 2001. Yet, looking back over the decade, even the best of these books can't seem to do more than circle around a void.

There are outright 9/11 novels, like Jonathan Safran Foer's "Extremely Loud and Incredibly Close" or Jay McInerney's "The Good Life," and those dealing with some aspect of the aftermath, like Amy Waldman's "The Submission" or Joseph O'Neill's "Netherland." Even a novel that has nothing much to do with the attack -- Jonathan Franzen's "Freedom," say, or Jennifer Egan's "A Visit From the Goon Squad" -- is obliged to at least genuflect in that direction, stopping at some point to mention how disturbed its characters were as they sat mesmerized in the blue glow of their TVs for a few days or weeks in 2001. Then whatever the story is really about kicks in again.

It's all a bit perfunctory -- almost, if never quite, provoking a roll of the eyes. Which is not to say that these novels depict 9/11 falsely. To the contrary; they get it pretty much right. A novelist deals in the winding and unwinding of long strands of cause and effect, in the reasons people do things and the often unanticipated results they get. The novel is about what matters to an individual and the way this affects how he or she chooses to live. It is, in short, an engine for finding and generating meaning, which is why it is fundamentally at odds with the horrific interruption of that day: At its heart, 9/11 was meaningless.

I realize that sounds inflammatory, but hear me out. The terrorist assault on New York and Washington, D.C., was historically momentous. Two thousand, nine hundred and ninety-six human beings died, most of them leaving behind devastated loved ones. Those deaths became the pretext for two wars, a major curtailment of civil liberties in America and human rights abroad, an orgy of patriotic chest-thumping and genuine soul-searching, the expansion of a largely unaccountable intelligence and security apparatus, the demonization of billions of peaceable Muslims by opportunistic demagogues, and so on and so on. Don't even get me started on the economy. But all of these things constitute our response to those 3,000 murders and the hideously spectacular way in which they were achieved. They don't change the nature of the deaths themselves, which were abrupt and unanticipated, as is the case with most disasters.

The great exceptions were the police, firefighters and others who died trying to save people from the burning towers in New York. Maudlin efforts to exploit their sacrifice for political, rhetorical or commercial purposes shouldn't obscure the fact that these rescuers were brave and heroic. But a firefighter who dies trying to pull people from a garden-variety house fire in Queens is no less brave or heroic. The civilians who perish in that fire or in a six-car pileup caused by black ice on an interstate or in a boat caught in a sudden storm or in a massacre by a gun-toting maniac in an IHOP are just as dead and just as fiercely mourned by their friends and family as those who died on 9/11. Do their deaths have less meaning because we keep telling ourselves that the deaths of 9/11 have more?

These are the sorts of questions that seep in once you move past thinking about 9/11 the way we're instructed to think about it and start to really think about it. And that is, in essence, the novelist's job: to explore life as it is lived instead of how it's talked about or photographed or editorialized or TV-movied. Yet it's not possible to disentangle the suffering of 9/11 from the media surrounding it because the media is why the atrocity was perpetrated. These killings were designed and styled for the camera, catering to it in every way.

For this reason, image culture has a different relationship to the attacks, which served as a nightmare confirmation of its bad conscience. There was a queasy symmetry in the jihadis' serving up the destruction of the towers to a society whose favorite entertainment consists of watching so many gigantic explosions. The spectacle was at once the worst sight in the world and exactly the kind of footage every news organization covets and every viewer tunes in to see.

Charged with looking beneath, behind and around such images, the novelist comes up against the question of what makes these particular violent deaths so very different from every other violent death. That isn't easy to answer, and any answer you do come up with is likely to sound disrespectful, cynical, unfeeling and insufficiently solemn. A novelist may decide to push onward anyway, whether into sentimentality ("Extremely Loud and Incredibly Close") or smarmy self-aggrandizement ("The Good Life"), but in such cases, the results feel thin, vaguely false and meretricious. "It's kryptonite to novelists," a critic friend of mine once said about 9/11.

More thoughtful writers have opted to treat the attacks only glancingly, or to transfigure them metaphorically. Tom Perrotta's new novel, "The Leftovers" -- set in a world from which millions of people have abruptly and inexplicably vanished -- shows how the prerogatives of fiction can be used to isolate the human losses of 9/11 from the endless tangles of ideological grandstanding, finger-pointing and chance-grabbing that followed. James Hynes' "Next" places its self-absorbed, discontented middle-aged protagonist at the center of an imaginary but very similar attack so that he can really live for the first time in the moments before his death. Waldman's "The Submission" chooses to focus on how quickly tragedy degenerates into media circus in the controversy over a memorial.

The deaths at the center of all this, however, remain stubbornly impermeable to interpretation. It's rare that any death can be called meaningful. A few of us, like the firefighters who charged into the World Trade Center, will end up giving our lives for something we believe in, but the rest of us will simply lose them. Sometimes other people will be to blame for that loss, and sometimes not. Most of the people to blame will be merely negligent -- careless food preparers or healthcare providers, for example -- but a handful, like the 9/11 hijackers, will be malevolent. And only a percentage of those who kill deliberately will do so for reasons that make any kind of sense. We scrabble for explanations, like the commentators who looked for ideological scapegoats after a lunatic shot U.S. Rep. Gabrielle Giffords last year, but that doesn't mean they're there.

Our ancestors lived with the understanding that sudden, senseless death lurked around every corner, whether it came in the form of invading Mongols, Crusaders or Vikings; by storm, flood, earthquake, volcano or fire; or by plague, drought or famine. Modern Americans don't face (all) the same threats, but most of us seem to believe that a protective bubble is not only possible, but our God-given right. The 9/11 attacks could have reminded us of how delusional this dream is, but instead they became an occasion for citizens to demand a ludicrous promise of safety from their government. Much of what we have given up as a nation was sacrificed for the sake of this illusion, for the chance to go on lying to ourselves.

Perhaps the best thing any novelist wrote about 9/11 wasn't a novel at all but a short essay by David Foster Wallace about the paring away of our civil liberties, published in the Atlantic in 2007. He pointed out that there are 40,000 highway fatalities every year, more than 10 times the toll of 9/11 and more than double the annual homicide rate. Those deaths are the price we are quite willing to pay for the freedom to drive around in our own cars, so why aren't we also willing to tolerate risk for the sake of "the rights and protections that make the American idea so incalculably precious"? He might as well have asked why we've decided that the 3,000 lives lost on 9/11 mean more than the tens of thousands lost on our nation's roads.

Great fiction is a kind of lie that tells the truth, but it's impossible to lie about lies and end up with anything besides more lies. The violent deaths of 9/11 were special to the extent than any human being's untimely death is special, but how to untangle that from the common -- if usually unspoken -- belief that they were special because that sort of thing doesn't happen to Americans, to people like us? It may be impossible to challenge that belief without also seeming to diminish the horror of those deaths and the grief of the survivors; the baby has swallowed the bathwater.

What the truth-seeking novelist is left with is a handful of minutes, maybe as much as an hour, running themselves out in a burning building. Hynes has probably done the best that any writer can with those minutes, and even so, "Next" never actually gets to the moment its title names. Life, not death, is the novelist's subject. There's a universe of things to say about the first topic, and next to nothing, perhaps nothing at all, to say about the latter. Silence, too, can be eloquent.