What Tim Pawlenty's endorsement of Mitt Romney means, and why he might be misguided 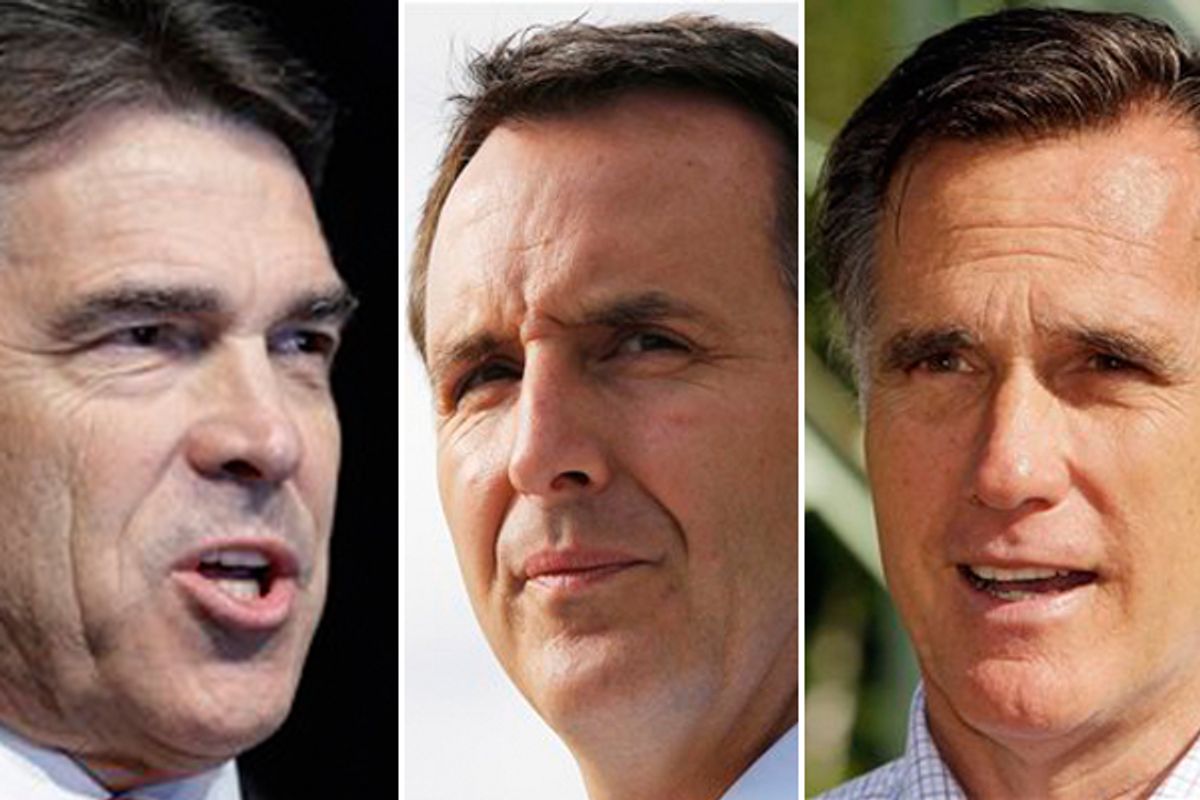 Thrilling campaign update: Loser Tim Pawlenty, a former candidate who never actually had very much support from anyone, has made his endorsement! He is going for Mitt Romney. And I'm sure the voters who supported Pawlenty will fall in line, besides the ones who only supported Pawlenty because he was supposed to be the non-Romney candidate with the best shot at winning. Pawlenty says he is supporting Romney because of Romney's record and his positions, but in his Fox and Friends appearance this morning, Pawlenty gave away the real reason:

“Gov. Romney wants to fix Social Security. He doesn’t want to abolish it or end it,” Pawlenty said. “Gov. Perry has said in the past that he thought it was ‘failed.’”

In other words, Pawlenty thinks Romney is more electable and Rick Perry has too many positions and quotes that could be used against him in the general election.

Maggie Haberman notes that that Mike Huckabee, a guy who would've had a very good shot at the nomination had he decided to run, made that same point today, explicitly:

"What Tim [Pawlenty] is looking at is the fact that Mitt may be the most electable Republican," said Huckabee....
[...]
Also, he said bluntly: "Perry hurt himself a lot with his Social Security talk and what he said may be technically true, but you go to South Florida or even any part of Florida or even the part where I live in the panhandle where you have a lot of retired people and essentially say that Social Security is a criminal enterprise, that's problematic."

So this segment of Republican elites does not think Perry is the best candidate to take on Barack Obama. You know who disagrees with them? Republican voters.

A new CNN poll shows that Republicans think Perry is the most electable candidate, "with 42 percent saying he has the best chance of beating Obama next year." Romney's at 26%. The story isn't that Perry is the most electable -- I think Huckabee is basically accurate -- it's that Republican voters have convinced themselves that Perry can win, because they like him the most.

A party is probably better off going with someone who excites people -- like Barack Obama! -- than someone who won the nomination because everyone convinced themselves that he was the most "electable" according to certain totally unscientific parameters -- like John Kerry! -- and the GOP always does well for itself by reaching just a bit further rightward than is currently politically acceptable. So Perry's Social Security talk might hurt him in Florida. But Mitt Romney might strike everyone in America as an effete phony with no principles. Either one could win if the economic situation continues to suck. Perry's only slightly higher risk, with potentially much greater reward.