New book shows another side to Jackie Kennedy

The former first lady's long-sealed 1964 conversations with Arthur M. Schlesinger Jr. will be published this week 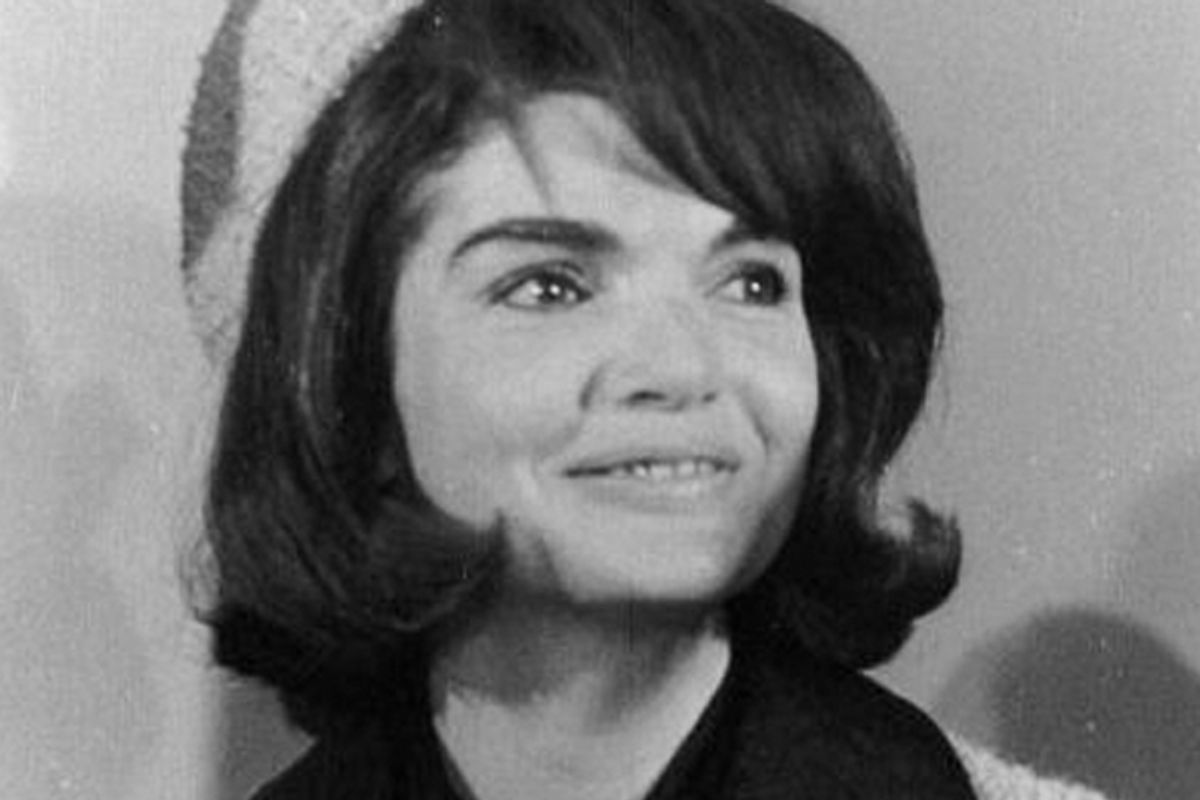 It's a side of Jacqueline Kennedy only friends and family knew.

Funny and inquisitive, canny and cutting. In "Jacqueline Kennedy: Historic Conversations on Life with John F. Kennedy," the former first lady was not yet the jet setting celebrity of the late 1960s or the literary editor of the 1970s and '80s. But she was also nothing like the soft-spoken fashion icon of the three previous years. She was in her mid-30s, recently widowed, but dry-eyed and determined to set down her thoughts for history.

Kennedy met with historian and former White House aide Arthur M. Schlesinger, Jr. in her 18th century Washington house in the spring and early summer of 1964. At home and at ease, as if receiving a guest for afternoon tea, she chatted about her husband and their time in the White House. The young Kennedy children, Caroline and John Jr., occasionally pop in. On the accompanying audio discs, you can hear the shake of ice inside a drinking glass. The tapes were to be sealed for decades and were among the last documents of her private thoughts. She never wrote a memoir and became a legend in part because of what we didn't know.

The book is coming out Wednesday as part of an ongoing celebration of the 50th anniversary of President Kennedy's first year in office. Jacqueline Kennedy died in 1994, and Schlesinger in 2007.

The world, and Jacqueline Kennedy, would change beyond imagination after 1964. But at the time of these conversations blacks were still "Negroes" and feminists were still suspect even in the view of a woman as sophisticated as Kennedy, who a decade later would grant an interview to Gloria Steinem's "Ms." magazine. In the book's foreword, Caroline Kennedy faults Schlesinger for asking so few questions about her mother.

As historian Michael Beschloss notes in the introduction, Jacqueline Kennedy once accepted that wives were defined by their husbands' careers and worried about "emotional" women entering politics. She enjoyed having her husband "proud of her," saw no reason to have a policy opinion that wasn't the same as his and laughed at the thought of "violently liberal women" who disliked JFK and preferred the more effete Adlai Stevenson.

"Jack so obviously demanded from a woman -- a relationship between a man and a woman where a man would be the leader and a woman be his wife and look up to him as a man," she said. "With Adlai you could have another relationship where -- you know, he'd sort of be sweet and you could talk, but you wouldn't ever ... I always thought women who were scared of sex loved Adlai."

There are no spectacular revelations in the Schlesinger discussions and virtually nothing about JFK's assassination. Kennedy's health problems and his extra-marital affairs were still years from public knowledge and from the knowledge of aides such as Schlesinger, who would often say he saw no "bimbos" in the White House halls. Jacqueline Kennedy speaks warmly throughout of her husband, remembering him as dynamic and perceptive and free of grudges, an assignment his wife and others took on for him.

Like any powerful family, the Kennedys had complicated relationships with those who shared their lives at the top. They valued loyalty, vision and ingenuity. They hated dullness, indecision and self-promotion, even among their own.

Jacqueline Kennedy dismissed the idea that the eldest Kennedy son, Joseph Jr., would have been president had he not been killed in World War II. "He would have been so unimaginative, compared to Jack," she said. She contrasted the integrity of Robert F. Kennedy, the president's brother and attorney general, with the designs of sister-in-law Eunice Kennedy Shriver. Robert Kennedy had begged JFK not to appoint him, fearing charges of nepotism. Eunice Kennedy, meanwhile, was anxious to see her husband, Sargent Shriver, named head of the department of Health, Education and Welfare.

"Eunice was pestering Jack to death to make Sargent head of HEW because she wanted to be a cabinet wife," she tells Schlesinger. "You know, it shows you some people are ambitious for themselves and Bobby wasn't."

Politics means doing business with people you otherwise avoid and Jacqueline Kennedy logged in many hours. She endured dining with journalists and members of Congress who had criticized her husband. She called Secretary of Labor Arthur Goldberg "brilliant" but added that "he talks more about himself than any man I've ever met in my life." White House speechwriter Theodore Sorensen had a "big inferiority complex" and was "the last person you would invite at night." She referred to France's Charles de Gaulle, whom she had famously charmed on a visit to Paris, as "that egomaniac" and "that spiteful man." Indira Gandhi, the future prime minister of India, was a "prune -- bitter, kind of pushy, horrible woman."

She was especially hard on Lyndon Johnson, who had competed bitterly with her husband for the presidency in 1960 and became vice president through the kind of hard calculation that the Kennedys became known for: Johnson was from Texas and the Democrats needed a Southerner to balance the ticket. Once in office, Johnson's imposing personal style and reluctance to speak up during cabinet meetings alienated the Kennedys. They mocked his accent and his manners, while he resented the Kennedys and other "Harvards" he believed looked down on him. Many top aides left soon after Kennedy was assassinated. Robert Kennedy became a public critic of Johnson's presidency and challenged him for the nomination in 1968.

"Jack said it to me sometimes. He said, 'Oh, God, can you ever imagine what would happen to the country if Lyndon were president?'" she recalled. "And Bobby told me that he'd had some discussions with him ... do something to name someone else in 1968."

Historians have described President Kennedy as unemotional and undemonstrative. But his widow recalls him lying on the floor with the kids, watching fitness instructor Jack LaLanne on television. They would follow LaLanne's moves and at times the president's toes would touch with his son's. JFK "loved those children tumbling around him in this sort of -- sensual is the only way I can think of it."

Her closest moments with her husband came during the Cuban Missile Crisis in 1962, when the United States and the Soviet Union seemed on the verge of nuclear war. She would lie down with him when he took a nap and walk with him, the two saying little, on the White House lawn. Some officials had sent their wives away, but the first lady resisted. Should the bombs fall, she wanted them to be together.

"If anything happens, we're all going to stay right here with you," she remembers telling her husband. "Even if there's not room in the bomb shelter in the White House ... I just want to be with you, and I want to die with you, and the children do, too -- than live without you."