As I sift through junk I've held on to for decades, I wonder why I'm willing to pay so much to avoid letting go 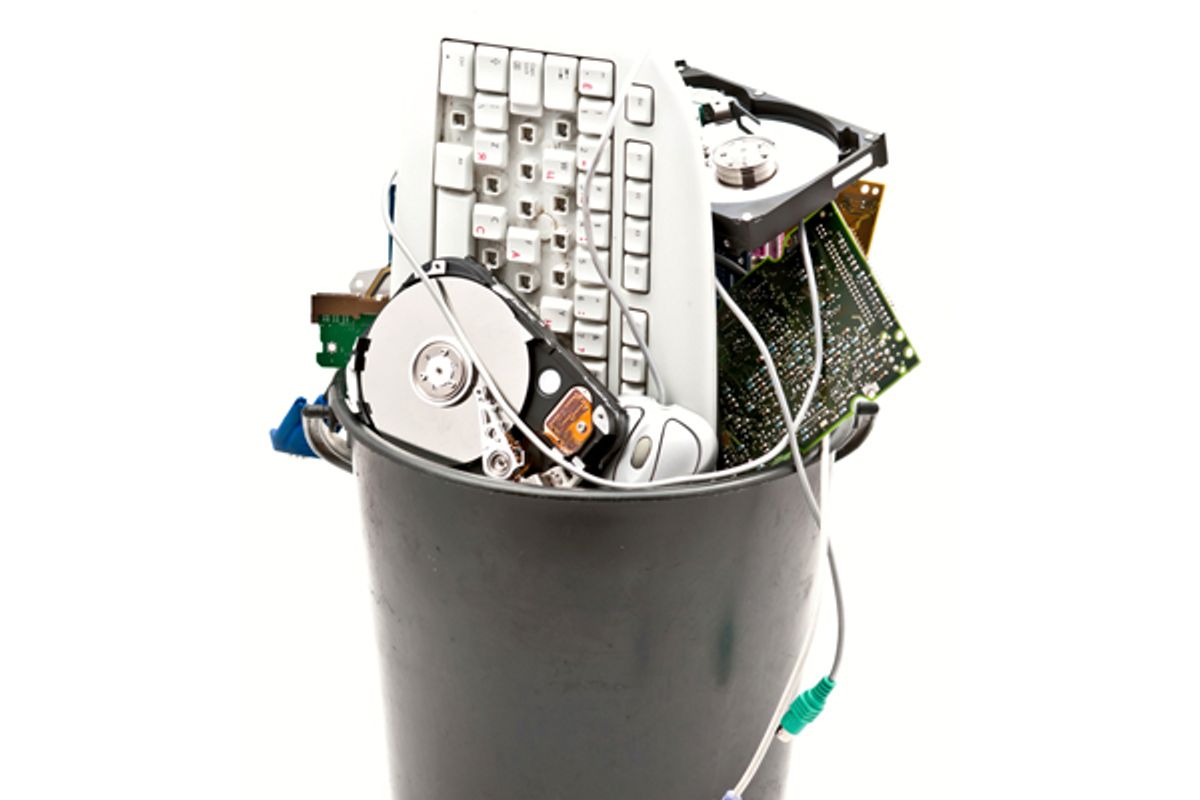 Earlier this year, I cleared out a storage locker jammed with the accumulated overflow of almost two adult decades -- along with some boxes of college books tossed in for good measure. This was actually my second storage locker, the successor to the Manhattan mini-storage unit that I acquired to insert some breathing space in the Upper West Side one-bedroom I rented shortly after law school. It was intended as a temporary measure, a momentary regrouping. But eight years later, when I finally packed up, the unit was still mine.

This past April, another full decade later, I watched with anxiety as movers unloaded seemingly endless stacks of boxes to the basement of my new home in Northampton, Mass. Would my books have gathered mold? Would my clothing be moth-infested? Would my sturdy law school bicycle even be functional?

And in fact, there were some disheartening moments -- a silk dress passed down from my grandmother that had simply disintegrated -- but the main reaction as I unpacked: What a bunch of junk. Here's some of what I found: a desktop computer circa 1989, with its companion dot-matrix printer. A non-working halogen floor lamp. Cartons of music cassette tapes from bands I'd forgotten existed. Boxes of law school textbooks. (And yes, some of them were dusty with mold, but really, who cared?) The list goes on. And on.

It got me thinking about why I'd stashed all this stuff in the first place -- and I had plenty of time to think as I hauled mountains of papers and ancient electronics to the town dump. Over the decades, I'd paid well over $10,000 -- $10,000! -- to stockpile these motley items, an amount far exceeding their value. I couldn't stop imagining other uses for this vanished cash. How had I let this happen? To be sure, I was far from alone in this seeming lunacy. There are 51,000 storage facilities in the United States, more than seven times the number of Starbucks, and one in 10 American households now rents a storage unit, according to a 2009 New York Times Magazine report. But far from reassuring me, this just made the phenomenon seem stranger.

I remember shockingly little of what I learned in law school, but one article from my first-year property class has stayed with me over the years, in particular a quirky yet oddly profound observation that we'd be more distressed to return home and find our living room sofa gone than to learn that the value of our home had dropped by a few percentage points. This is because certain possessions are "self-constitutive." They are intimately bound up with our sense of who we are. "A person cannot be fully a person without a sense of continuity of self over time," wrote University of Michigan law professor Margaret Jane Radin in her seminal article "Property and Personhood." "In order to lead a normal life, there must be some continuity in relating to 'things'."

If a fulfilling life requires roots as well as wings, my own life has veered decidedly toward the latter. My family of origin has scattered from London to L.A., and we have few remaining ties to the Midwestern city of my childhood. As an adult, I've lived in Washington, D.C., Manhattan, Mississippi (the Delta and Jackson), Nashville, Cambridge, Mass. (twice), and western Massachusetts (both the Berkshires and the Pioneer Valley). Single, no kids, I've traveled light. (At least, if you don't count the storage.)

Perhaps holding close to my belongings has been a compensation of sorts, a way of making up for the absence of other enduring ties. Along with utility bills from the 1980s, a broken coffee maker, and a set of wicker window shades, my storage unit also sheltered items rich with personal meaning. The copy-edited manuscript of my first novel. A collection of rare books about the Deep South dating from my years as a vagabond newspaper reporter. The purple and pink neon wall clock bestowed by a once devoted boyfriend.

These things mattered, and I was glad to have them. At the same time, they also evoked a certain uneasiness, an anxious, unsettled sort of feeling that I struggled to make sense of. Buddhist teachings tell us that attachment is the source of all suffering. Everything we love and cherish will eventually be lost; that's just the way things are. This is why we're urged to ground our happiness in things beyond change and why Buddhists vow to take refuge in the Buddha, the Dharma (teachings) and the Sangha (community) -- the so-called Triple Jewel.

The concept of refuge struck a chord with me. In my own life, I've tended to invest deeply in objects collected and carried with me from place to place over the decades. The impulse is understandable, natural even. As Radin observes, we count on a certain external stability -- for example, the ongoing presence of that aforementioned living room sofa. And yet more and more, for many of us, life is upsetting these expectations, making it difficult if not impossible to keep hold of what we have.

We live in an era of lost homes and lost jobs, of vertiginous stock market swings and careening retirement plans. The ambient surround of loss and fear can make us acutely sensitive to the costs of letting go -- so much so that we may lose sight of the costs of holding on. In an era where family homes were paid off and passed on through generations, a sense of connection to place and possessions may well have tended to enhance our collective well-being. But in this time of unpredictable turbo-charged change, such attachments often come at tremendous cost both in dollars and in human pain.

In such uncertain times, it seems wise to think carefully about where we choose to seek refuge, about how we plan to meet our deepest needs for continuity and meaning. We might start with a question that Radin suggests in her book "Reinterpreting Property": What are the connections that will enable us to flourish? We can do our best to safeguard the things we value while also recognizing we will suffer less if we can look for enduring sources of happiness.

As the ideas for this essay started to come together, I wanted to reacquaint myself with the Radin piece that had made such a strong impression on me more than two decades before. This was precisely the sort of need I'd anticipated in saving my law school files, and even as I reflected on the merits of letting go, I congratulated my foresight. I even knew just where the box was in the jumble that now filled my basement. But when I filed through its contents, Radin's article was nowhere to be found. To be sure, I had plenty else from that long-ago property class -- lecture notes, study outlines, even the syllabus. The only thing I couldn't find was the one thing I needed.

It finally occurred to me that Radin was a real person with a real email address, and that this information would be readily available on the University of Michigan Law School's website. She got back to me within an hour, identifying the book in which the essay appeared. For less than 10 bucks, it was on my Kindle, then a quick search, and there it was: the sofa reference I'd been seeking.

I couldn't help noting that an email had accomplished what more than $10,000 in storage had not.

Then I went back to loading my car for another trip to the dump.