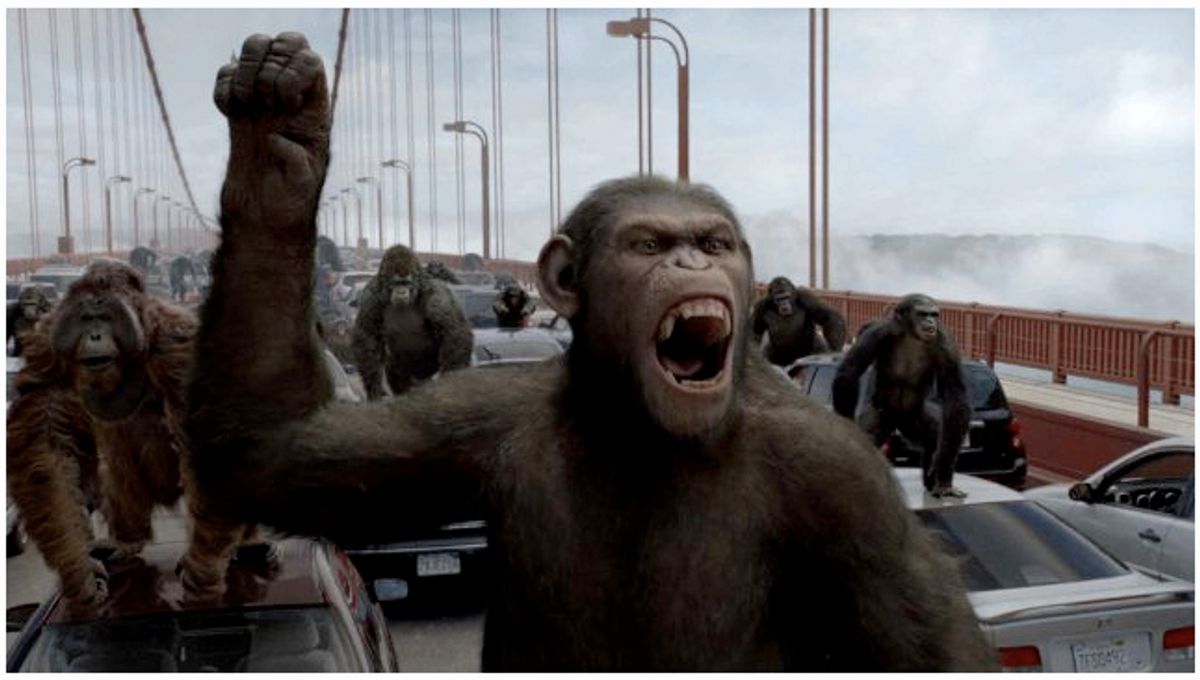 A still from "Rise of the Planet of the Apes"
--

Our oppressed underclass rises up and rebels against inhuman treatment -- well, at least in some of Hollywood's biggest current blockbusters.

While Tim Burton’s 2001 "Planet of the Apes" remake didn’t seem to have much on its mind, "Rise of the Planet of the Apes" is far more engaged with the culture of the moment -- as was the original, widely seen as a response to the civil rights movement. It's the only recent American film with even metaphorical relevance to the Arab Spring movement. And it shares some interesting resonance with Tate Taylor’s "The Help" and British director Joe Cornish’s "Attack the Block."

"The Help" falls into a long line of "problem pictures" running from Elia Kazan’s "Gentleman's Agreement" and "Pinky" to Paul Haggis’ "Crash." They’ve proven popular with Oscar voters, but while they purport to expose racism and other prejudices, they often subtly reinforce stereotypes in the guise of dismantling them. Whatever their virtues (usually as showcases for actors), such films tend to suffocate on their own earnestness. That can’t be said for "Rise of the Planet of the Apes," which falls into another tradition. It’s no B-movie, but it moves along like one. Its depiction of the fine line between humanity and the animal kingdom owes a lot to George Romero’s "Living Dead" trilogy and David Cronenberg’s films. Genre films benefit from being irresponsible, which I mean in the most positive sense. By talking about animals and monsters rather than speaking more directly about race and class, they have the freedom to escape from received wisdom about the latter subjects.

Scientist Will Rodman (James Franco) injects several chimps with a wonder drug he believes has the potential to cure Alzheimer’s, a disease his father, Charles (John Lithgow), suffers from. He adopts the baby of a chimp named Bright Eyes, who was killed in a rampage through his bosses’ offices. Charles names the chimp Caesar. Caesar proves to be quite smart, and Charles, after receiving injections of his son’s drug, recovers from Alzheimer’s. However, this happy state of affairs doesn’t last.

Last month also brought the release of a film dealing directly with the civil rights struggle: "The Help." If "Rise" can be seen as an allegory of the struggles of people of color. "The Help" offers up saintly heroes and easily identifiable villains. No human with any power in "Rise of the Planet of the Apes" is as benign as "The Help’s" white heroine, writer Skeeter (Emma Stone). The African-Americans in "The Help" need her to teach them how to express their anger, with the exception of one maid who serves her former boss a pie made of shit. (The film refers back to this scatological moment obsessively.) It concludes with a fired maid (Viola Davis) deciding to follow in the footsteps of Skeeter, whose book is appropriated from her experience, and become a professional writer, a far cry from the insurrection and mad rush to freedom that close "Rise of the Planet of the Apes." The kindest interpretation one could place on "The Help" is that it depicts the very early beginnings of a revolt.

"Attack the Block" hit American screens a few short weeks ahead of the riots that tore up England. It’s full of the rage underpinning them, sharing a populist skepticism of authority with "Rise of the Planet of the Apes." It shows an alien invasion landing in a housing project laden with drugs and guns, and its main narrative arc shows how its gangsta protagonists, who mug a woman in its opening scenes, swerve from being antiheroes to heroes. To them, aliens may be just one of the Man’s tools against poor people, like crack and the widespread availability of weapons, and the police are more of a threat than protection. The alien invasion brings its characters together across gender and racial barriers as they have to protect themselves. It showcases the vibrant, multiracial but violent British urban culture reflected in grime and dubstep music that is missing from most of the British films Americans get to see. While it deals more bluntly with race and class than "Rise," it uses the metaphor of an alien invasion to address these subjects in fresh ways.

The environmentalism of "Rise of the Planet of the Apes" isn’t particularly new; as critic Manohla Dargis has pointed out, the '70s brought us disaster films about all kinds of mutant animals. What’s different this time around is the frank misanthropy with which Wyatt indulges it. Caesar’s time in a primate center doesn’t seem much different from a particularly run-down jail. Through bars, he’s fed slop that looks like vomit. He gets to see the worst of the human race, and only the most cold-hearted people would side with us. These scenes don’t go as far as the images of real-life experimental chimp Nim Chimpsky in a hepatitis vaccine lab in James Marsh’s documentary "Project Nim" (released earlier this year), but they justify Caesar’s anger. In a key moment, an orangutan tells Caesar (via sign language) "human no like smart ape." The film’s action bears this out.

The original "Planet of the Apes" series cast actors in makeup and costumes. "Rise of the Planet of the Apes" uses elaborate CGI instead. Wyatt seamlessly integrates computer-generated apes into real locations. The film wouldn’t have such pull if there wasn’t an element of recognizable reality behind it. It seems to be taking place in our world, not a distant futuristic construct.

"Rise" never idealizes Will, a nice guy whose actions show the limits of liberal good intentions. Initially, he refuses to take care of Caesar and only does so when told that the chimp will be killed otherwise. The two develop a real bond, and the first third of the film is genuinely sweet. However, after Caesar attacks a neighbor arguing with Charles, Will is forced to send Caesar to a primate center. He makes empty promises to free him. By the time he’s finally in a position to do so, Caesar prefers the company of ape society. Worst of all, Will’s "wonder drug" turns out to be deadly to people.

As of the time of this writing, "Rise of the Planet of the Apes" has grossed $160 million in the U.S. It’s gotten mainstream audiences to embrace a startling degree of schadenfreude, cheering on the demise of their on-screen counterparts. It encourages the spectator to recognize that if another intelligent species were to emerge, they would be horrified by our treatment of animals. No doubt some of the film’s audience would reject such an argument if it were stated directly by an animal rights activist or environmentalist, but the filter of metaphor makes it far more palatable. "Rise of the Planet of the Apes" ends with a successful rebellion of the apes, hinting at a full-fledged revolution to come in the sequel. Could Hollywood -- or even Indiewood -- imagine such an uprising with people in place of apes? You might have to turn to the Egyptian documentary "Tahrir," about to play the fall film festivals, for its real-life equivalent.