Republicans claim a victory in a New York City district that has something in common with ... Appalachia 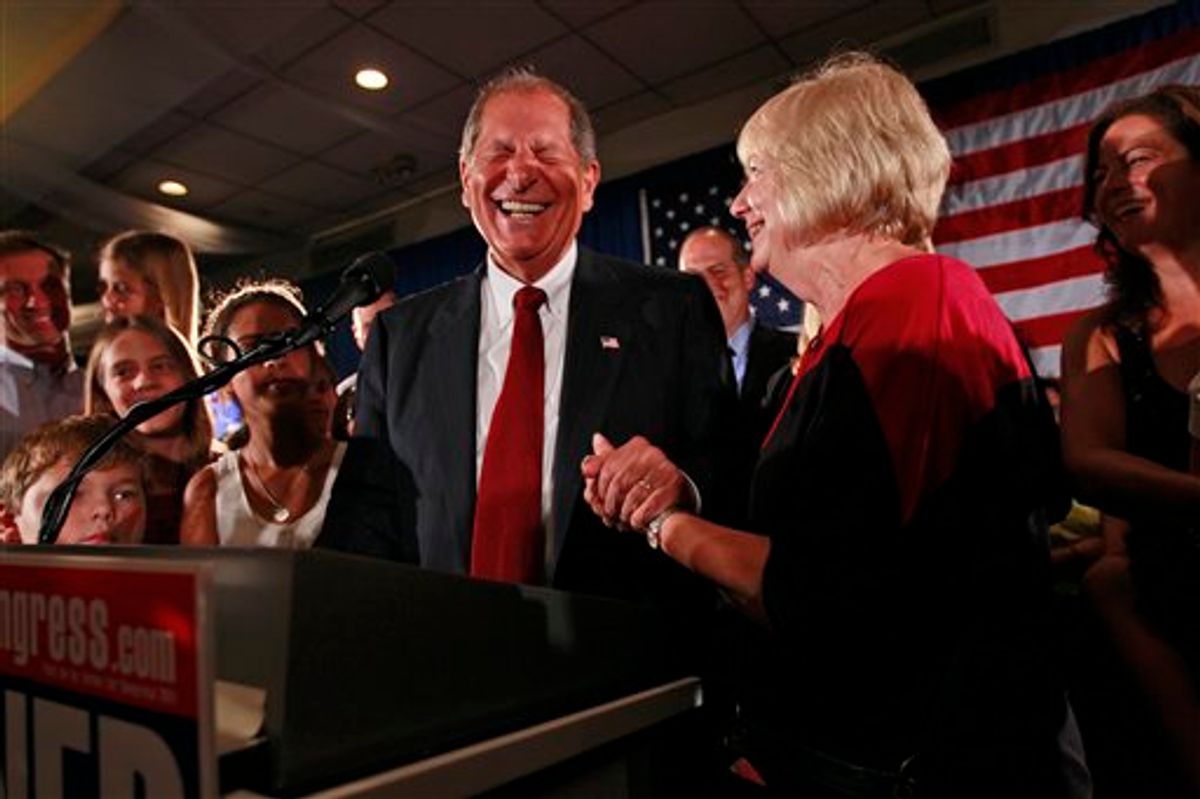 Bob Turner, center, joined by his wife Peggy, right, and family smiles as he delivers his victory speech during an election night party, Wednesday, Sept. 14, 2011 in New York. Turner says his win in a heavily Democratic New York City district is a "loud and clear" message to Washington. Turner defeated Democratic Assemblyman David Weprin on Tuesday to succeed Anthony Weiner who resigned amid a sexting scandal. It's the first time a Republican has been elected in the district. (AP Photo/Mary Altaffer) (AP)
--

Maybe you remember the much-discussed map that the New York Times ran in November 2008, just after Barack Obama racked up a bigger share of the national popular vote than any Democrat had in 44 years. It really was the perfect election for Democrats, with just about everything breaking their way, and yet the Times showed that in a few pockets of America, Obama had somehow fared worse than his party's previous (losing) nominee.

This phenomenon was mostly centered in Appalachia, but there were exceptions -- like the Brooklyn/Queens-based 9th District of New York, where Obama performed one point worse than John Kerry had in 2004 and 12 points worse than Al Gore had in 2000.

This may be the most important piece of information to keep in mind now that the voters of that same 9th District have just handed national Republicans a dream talking point, using a special election to replace Anthony Weiner to send a Republican to the U.S. House. It marks the first time since 1990 that a New York City district not mainly based on Staten Island has voted Republican, and the timing couldn’t be much better for the national GOP, which is now free to crow that President Obama is so unpopular that he’s costing his party elections in one of the country’s bluest cities.

That's how politics works, obviously, and Democrats would surely do the same thing if the roles were reversed. But if you can get beyond the fact that it technically played out within the confines of New York City, there really isn't much that's remarkable about the victory that Republican Bob Turner achieved on Tuesday night.

Mainly, it tells us what a simple look at President Obama’s job approval numbers (or the economic indicators that are largely responsible for them) would tell us: Voters are frustrated and eager to register their displeasure with him and his party. This is true everywhere, but particularly in areas like the 9th District, where voters already had clear reservations about Obama even before he did anything as president -- back when his approval ratings were still stratospheric. (Where did those reservations come from? A New York Democrat provided a good description of the 9th District’s ethnic-driven, culturally conservative politics earlier on Tuesday.)

In the can’t-miss climate of 2008, Obama was still able to secure 55 percent of the vote in 9th, but two-and-half years of immense economic anxiety have made it impossible for him to build goodwill with an electorate that started out skeptical of him. There will be plenty of talk in the days ahead about whether particular issues -- like Israel (Ed Koch urged the district’s sizable Jewish population to back Turner) or gay marriage (which the Democratic candidate, David Weprin, supported it in the New York state Assembly) -- brought about Tuesday’s result.

But this misses the bigger point that when economic anxiety is as high as it now is, voters often work backwards in making up their minds, first deciding they want to vote against the incumbent president’s party then figuring out why. It wasn't hard to see this process at work in a recent New York Times story on the race, which quoted a Democrat who had decided to vote for Turner:

But it was there that Dale Weiss, a 64-year-old Democrat, approached the Republican running for Congress in a special election and, without provocation, blasted the president for failing to tame runaway federal spending. ''We need to cut Medicaid,'' she declared, ''but he won't do that.'' She shook her head in disgust. ''He is a moron.''

This more than anything is what the Democrats are up against all across the country right now: Voters who might have backed Obama in ’08 (even if reluctantly) but who are now looking to marry their feelings of anger to logical-sounding explanations. (And yes, it works both ways; it’s how Bill Clinton knocked off George H.W. Bush in 1992.)

This doesn’t mean that it’s impossible for Democrats to win special elections in this climate. After all, it was just a few months ago that they picked up a Republican seat in Western New York's 26th District, with a campaign that focused on the Medicare overhaul that Paul Ryan and House Republicans pushed. But the nature of the district matters. The 26th had moved away from the GOP between 2004 and 2008, so much that Obama nearly won it over McCain -- unlike the 9th, which was already pulling away from Obama in the fall of '08. So while Obama technically fared better in the 9th in '08, he and his party may have more room to maneuver right now in a place like the 26th.

Plus, candidate quality does matter. Weprin’s selection looked awful from the start, with news reports portraying him (correctly) as a willing tool of party bosses who wanted to fill the seat for a few months with someone who wouldn’t make waves, then carve it up in redistricting. In a better climate, they might have gotten away with this, but with the district’s voters actively looking for reasons to snub Obama’s party, it didn’t help.

None of this is to say that Turner’s win is a non-story. Nor, for that matter, is the apparent victory of Mark Amodei in Tuesday’s other special House election, which was held in a Republican-friendly district in Nevada. President Obama is in serious political trouble and is faced with an electorate that could easily deny him a second term next year. But then, that would have been true even if the Democrats had pulled an upset or two on Tuesday night.