Michele Bachmann moves to the left (on crazy conspiracy theories) 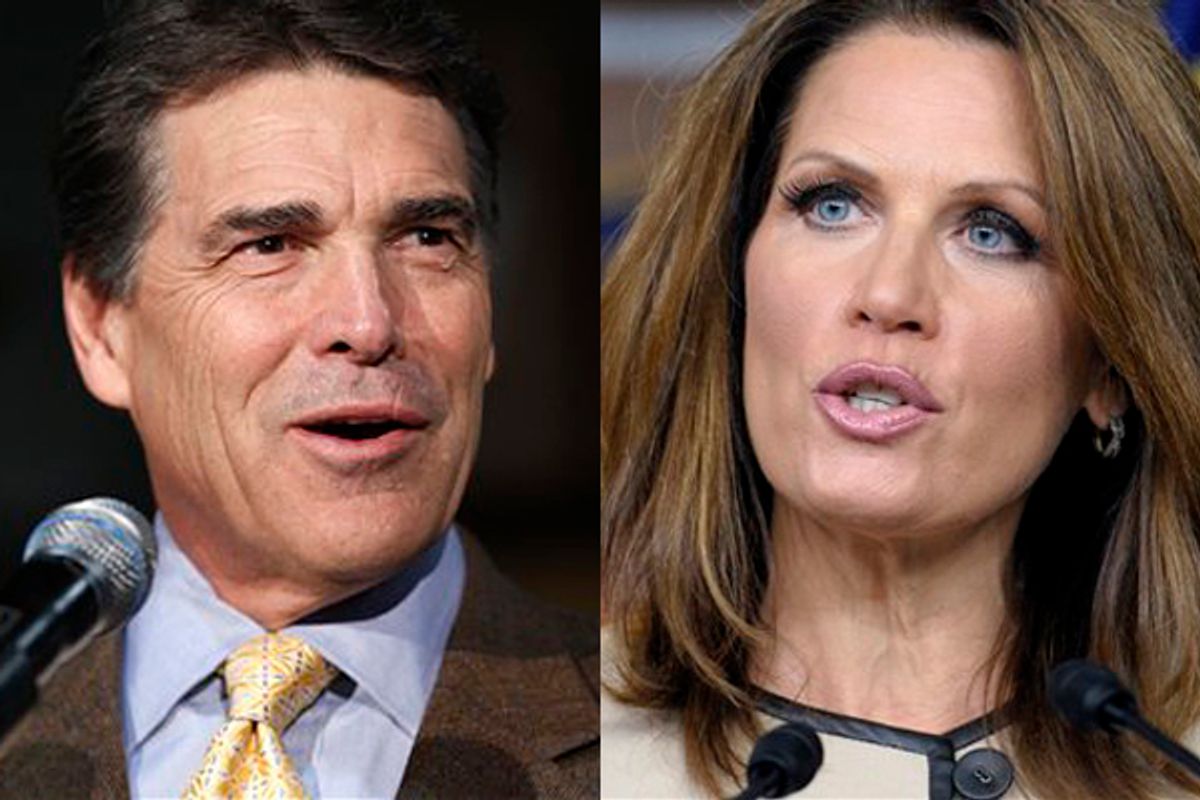 In a Thursday, Sept. 8, 2011 photo, Republican presidential candidate Rep. Michele Bachmann, R-Minn., delivers the Republican response to the speech by President Barack Obama to a joint session of Congress at the Capitol in Washington. Starting this weekend, Bachmann plans to campaign almost exclusively in Iowa as she tries to reassert herself in a race that's become a two-candidate contest between Texas Gov. Rick Perry and former Massachusetts Gov. Mitt Romney. (AP Photo/Cliff Owen) (Cliff Owen)
--

Michele Bachmann said that the HPV vaccine makes babies "retarded." This is easily the dumbest, most irresponsible and inflammatory comment she's made in years. It began at Monday's debate, when she attacked Rick Perry for his now infamous decision to require that girls receive the vaccine. "Little girls who have a negative reaction to this potentially dangerous drug don’t get a mulligan."

She accused Perry of only supporting the policy for money:

She got worse after the debate, on Fox and the "Today" show, when she said an unnamed mother told her that her daughter became "retarded" after receiving the vaccine.

Obviously there are no cases of kids becoming "retarded" after receiving the HPV vaccine. I am pretty sure Bachmann meant to reference the popular myth that vaccines (usually the common MMR vaccine) cause autism, but she got confused.

So she either repeated some hearsay some random person told her as factual at a nationally televised presidential debate and then twice more on television because she's an imbecile, or she is cannily reaching out to the sizable number of paranoid parents with misguided concerns about vaccines. She has a very good ear for the sort of scary story people half-hear on the news or get the gist of third-hand from a friend -- her first school board run was built on horrible tales of what the government was secretly doing to your children.

So, in that sense, this is completely unsurprising. Bachmann is an avowed enemy of science, running to represent a party that of late has decided that scientists are untrustworthy liberals. She has a long history of parroting conspiracy theories and believing and repeating anything she hears or reads that reflects her biases.

But this isn't your typical right-wing conspiracy theory, about climate scientists plotting to destroy capitalism, or the U.N. using bike-share programs to institute a world government. This, this is a liberal conspiracy theory.

The "vaccines cause autism" lie is as liberal as conspiracy theories get. Crunchy coastal elites, panicky about the health of their babies in a world full of "toxins," are the ones not getting their kids vaccinated these days, because of something they read on the Internet (or saw on "Oprah"). The story has traction in part because it's anti-corporate. It insinuates collusion between the government and those damned pharmaceutical companies that are only out for profit. (The scientists, too, are in the pockets of big pharma!) This stuff doesn't get much play on the right, because it doesn't tap into the foundational myths of the conservative movement or play on their tribal fears. Right-wingers are more concerned about their babies being exposed to the mental toxins of liberal indoctrination than, say, mercury.

This is why Ace of Spades is mocking her. It's why Rush Limbaugh said she "jumped the shark." It's why the Corner featured multiple posts strongly decrying Bachmann's "dangerous flirtation with the anti-vaccine movement." Conservatives oppose giving girls the HPV vaccine because they want premarital sex to have (potentially deadly) consequences, not because they think vaccines are inherently dangerous.

But vaccine panic is big. It's specifically big with mothers. With Rick Perry sucking up Bachmann's support, she needs to branch out a bit. This is her version of "moving to the center." Michele Bachmann moderates her message by adding liberal conspiracy theories to her repertoire.

What is actually funny is that Perry only ever did the right thing in the first place for the wrong reasons. Everything Bachmann said about the Gardasil deal being an example of crony politics is totally true! A drug company hired Perry's former chief of staff to lobby him to do something that would make them money. But sometimes the special interests looking to maximize their profit are maximizing their profit by doing something good. (Like, say, Internet companies fighting for net neutrality.) The lesson here is that Planned Parenthood should give Rick Perry a couple thousand dollars and watch him turn pro-choice.

So Bachmann, in going after Perry for coziness with industry lobbyists while also latching on to vaccine toxin panic, is now the Republican Party's most liberal 2012 candidate. (She did already go after Obama on the African-American unemployment rate. Maybe she's been a leftist this whole time!)