In defense of the baseball novel

Baseball has a grand literary tradition. Why does the acclaimed book "The Art of Fielding" not want any part of it? 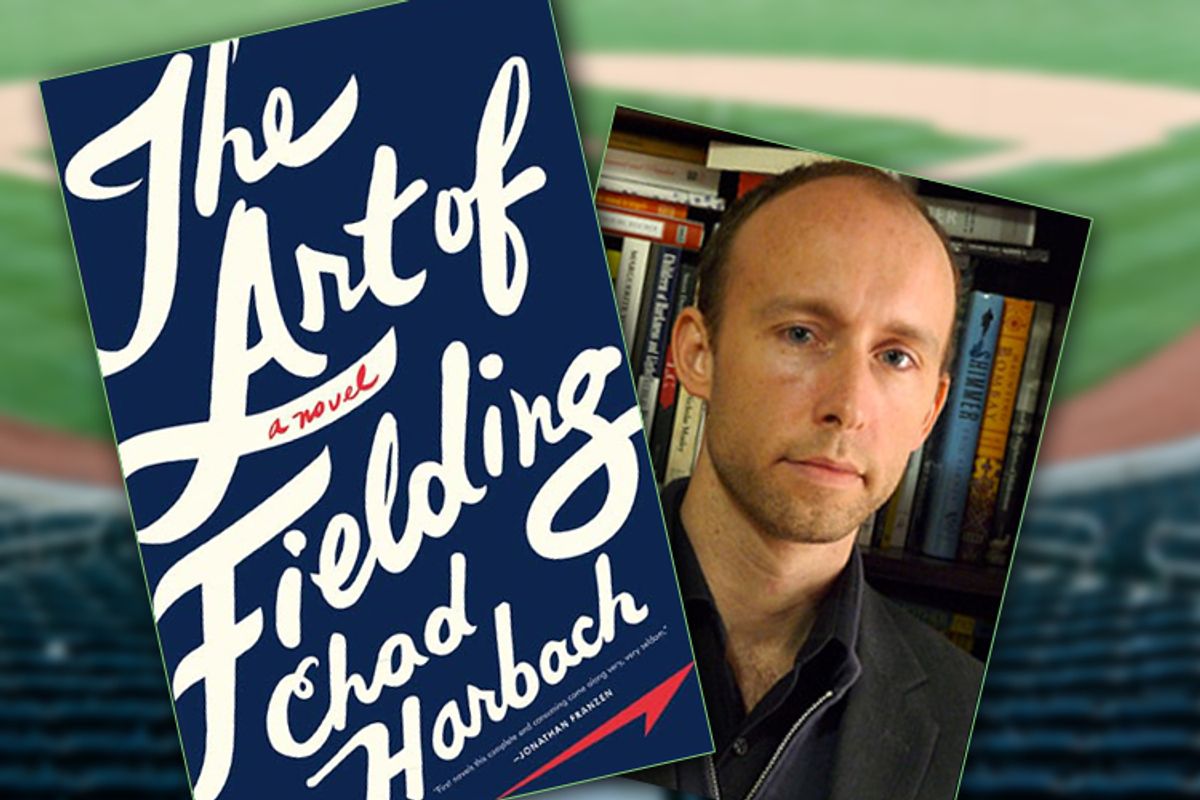 Chad Harbach's debut novel, "The Art of Fielding," arrives with no lack of fanfare. It was sold, famously, for $665,000 (North American rights alone), blurbed by Jonathan Franzen (as "complete and consuming") and optioned for TV by HBO. It has renewed some people's faith that literary fiction, even without Oprah's blessing, can be a commercial proposition.

Oh, and it's about baseball. Not that its publisher is keen to advertise this. Indeed, Vanity Fair's 19,000-word e-book on the novel's "birth" describes how its designer was forbidden from referring to the sport on the book's cover. "The Art of Fielding's" official description tells us it's "about" such things as ambition, family, friendship, love and commitment -- themes common to just about any novel. Though the baseball novel may be in rude health -- according to bibliographer Noel Schraufnagel, some 200 of them were published between 1990 and 2007 alone -- in literary circles, it's still deemed minor-league. Sure, the likes of Fitzgerald, Faulkner and Hemingway made reference to baseball in some of their best-known works, but most novels about the sport are dismissed as Cracker Jack for the sort of enthusiast that agonizes over his -- and it's always his -- fantasy team, rather than manna for the enlightened, worldly reader.

Yet baseball, with its colorful history and fiercely guarded traditions, is an ideal framework through which to contemplate America's culture and character. Schraufnagel's study, "The Baseball Novel," identifies waves of novels dealing with race (via the sport's integration of African-American and Hispanic players), gender and sexuality, where baseball, as a conservative, immovable object, meets the unstoppable force of societal change. Baseball fiction's predominant concern is with the attempt to safeguard the American dream, and it depicts honest, hardworking capitalists attempting to defeat underhanded villains driven by filthy lucre. Ring Lardner's "You Know Me Al" (1916), the first truly popular baseball novel, captured the uncomfortable relations between players, owners and gamblers, even three years before the notorious Black Sox scandal, when players were banned for throwing the World Series.

Since then, just about every work of adult baseball fiction has dealt in one way or another with the corruption of the sport, including those few that have been welcomed into the literary fold. In Bernard Malamud's myth-laden debut "The Natural," the lead character is bribed; in Philip Roth's darkly farcical "The Great American Novel," a team's money-hungry owners lease its ballpark and force it to play all its games on the road; in W.P. Kinsella's redemptive "Shoeless Joe," a magical baseball "field of dreams" is threatened by its creator's mercenary brother-in-law. Even Robert Coover's mind-warpingly postmodern "The Universal Baseball Association, J. Henry Waugh, Prop." portrays the made-up league in its protagonist's head as being under threat by his job as an accountant.

"The Art of Fielding" goes even deeper into the nature of baseball itself than all these: It's set in a fictional liberal arts college in Wisconsin, whose team plays the sport for its own sake, unsullied by commercial constraints. Harbach exposes an issue that's integral both to the sport and to American democracy: the tension between the individual and the collective, where the pursuit of personal happiness is pitted against the good of the whole.

More than any other team sport, baseball can be broken down to a series of one-on-one confrontations; it rewards solo efforts, from the home run to the no-hitter, and punishes mistakes as errors. And yet, players are sometimes called upon to sacrifice themselves: As one character remarks to "The Art of Fielding's" protagonist, Henry Skrimshander, "You chose to say Laying down a bunt the way a person might say Laying down my life." Baseball heroes uphold the standards set out for great men by Ralph Waldo Emerson in his essay "Self-Reliance" -- they think for themselves and value "the independence of solitude" but accept "the society of [their] contemporaries" and "the connection of events," and come into their own as "guides, redeemers and benefactors." Such prose may seem grandiose in context, but Harbach's collegiate characters are given to quoting Emerson and other American Renaissance authors, who wrote at a time when baseball was becoming "the national pastime." Westish's baseball players are forced to examine how their roles on the team affect their trajectories in life.

As "The Art of Fielding" opens, Henry, a recent high-school grad from South Dakota, is practicing fielding grounders. The setting is symbolic: a "ramshackle ballpark between a junkyard and an adult bookstore on the interstate outside Peoria" -- a scrap of nature surviving the worst of what urban sprawl has to offer. Skrimshander, the farm boy, has a natural talent, and he moves in a way that makes Westish catcher Mike Schwartz paraphrase Robert Lowell: "Expressionless, expresses God."

When Henry enrolls in Westish, his skills inspire the college's mediocre baseball squad just as former farm boy Roy Hobbs' magnificent home runs lift up the lowly New York Knights in "The Natural." But where Hobbs is an imperfect hero who thinks only of his own accomplishments, Skrimshander has the opposite problem: He seeks to lose himself in the game. He constantly pores over a collection of Zen-like aphorisms by his idol, shortstop Aparicio Rodriguez, and takes to heart advice about "dissipating the self, which is the source of all suffering and poor defense." Henry calls his glove Zero, and on and off the field, he seeks to empty out all that is not baseball, focusing only on training and playing; even big-league scouts offering money don't throw him off-course. But when he's on the verge of topping Rodriguez's college errorless streak and becoming a national hero in his own right, he commits his first-ever error. Only then does he realize what he's given up to get to this point, and it frightens him.

His mentor, Mike Schwartz, also gives himself to the team: His single-minded drive to help them win screws up his relationships with women and his career prospects. On the other hand, one of Henry and Mike's teammates embarks on a clandestine relationship with the college's president, and both put their personal lives above their commitment to their institution and the team.

The novel feels intimate, bound up in the details of its characters' everyday lives, which Harbach relates with tenderness and observational humor, and as with any "literary" baseball novel, the players' personal struggles also take on a larger resonance. Baseball, the sport of summer, is best suited to the genre of romance, which is unruly, episodic and given form, or so Northrop Frye tells us, by the quest. As veterans of college English lit classes know, Bernard Malamud made this explicit in "The Natural," where Roy Hobbs seeks to bring the pennant to his manager, a wounded Fisher King figure named, er, Pop Fisher. "Shoeless Joe's" hero, Ray Kinsella, is given a series of increasingly bizarre quests by a voice he hears in his head; one of them involves his kidnapping the author J.D. Salinger and bringing him to a baseball game in order to "ease his pain." In Don DeLillo's "Underworld," a collector quests for 22 years for the Bobby Thomson home run ball from the "shot heard 'round the world," all the while asking himself, "Why do I want this thing? What does it mean?"

Harbach plays with the idea of the quixotic quest: At one point in "The Art of Fielding," Mike Schwartz reflects that he could be seen as "the Ahab of this operation, this tournament the target of his mania." To be fair, this role may have been thrust upon him: Westish's sports teams are called the Harpooners, in reference to "Moby-Dick," whose author is said to have visited the college on a lecture tour late in his life. Having discovered this tenuous connection in 1972, the college administrators, in perhaps "a risible act of desperation," erected a statue to Melville and rebranded themselves, resulting in high-selling "commercial kitsch" in their bookstore and T-shirts that read, "WESTISH COLLEGE: OUR DICK IS BIGGER THAN YOURS."

Westish's appropriation of Melville's Great American Novel attempts to give the college significance, but its sports teams' nickname is quizzical: At the end of his failed quest to kill the white whale, Ahab is killed by his own harpoon. What's more, in "Moby-Dick," Ahab's peg leg is made of sperm-whale jawbone, or what Melville calls skrimshander; Henry's last name suggests that he isn't so much in charge of the team's quest as propping it up and being dragged around.

Though Harbach layers his characters' baseball dreams heavily with postmodern irony, he's not simply making fun of them, or of their goals. Pella Affenlight, Westish's president's daughter, the one significant character who's something of an outsider, cuts through the Harpooners' fraught masculine dramas with her sardonic wit, but even she develops affection for the team members. As readers, we come to feel the same way.

The Harpooners' quest, in the context of college life and bolstered by a literary perspective, is a process through which a baseball player can define himself as a person and as part of a group, and become, as Emerson would say, self-reliant.

As for Harbach himself, the 10 years he spent writing the novel, underemployed and with collection agencies at his heels, obviously paid off -- and not just commercially. Vanity Fair's e-book details how, after his agent helped create a bidding war, Harbach turned down the most lucrative offer in order to work with Little, Brown's Michael Pietsch, who edited David Foster Wallace. Thus, Harbach himself is seen to have heroically fended off the forces of greed and corruption, and safeguarded the integrity of his literary novel.

And maybe for the next edition, they'll even put a baseball on its cover.