The theft of the American pension

In the last decade, the country's biggest companies have raided worker benefits for profit. An expert explains how 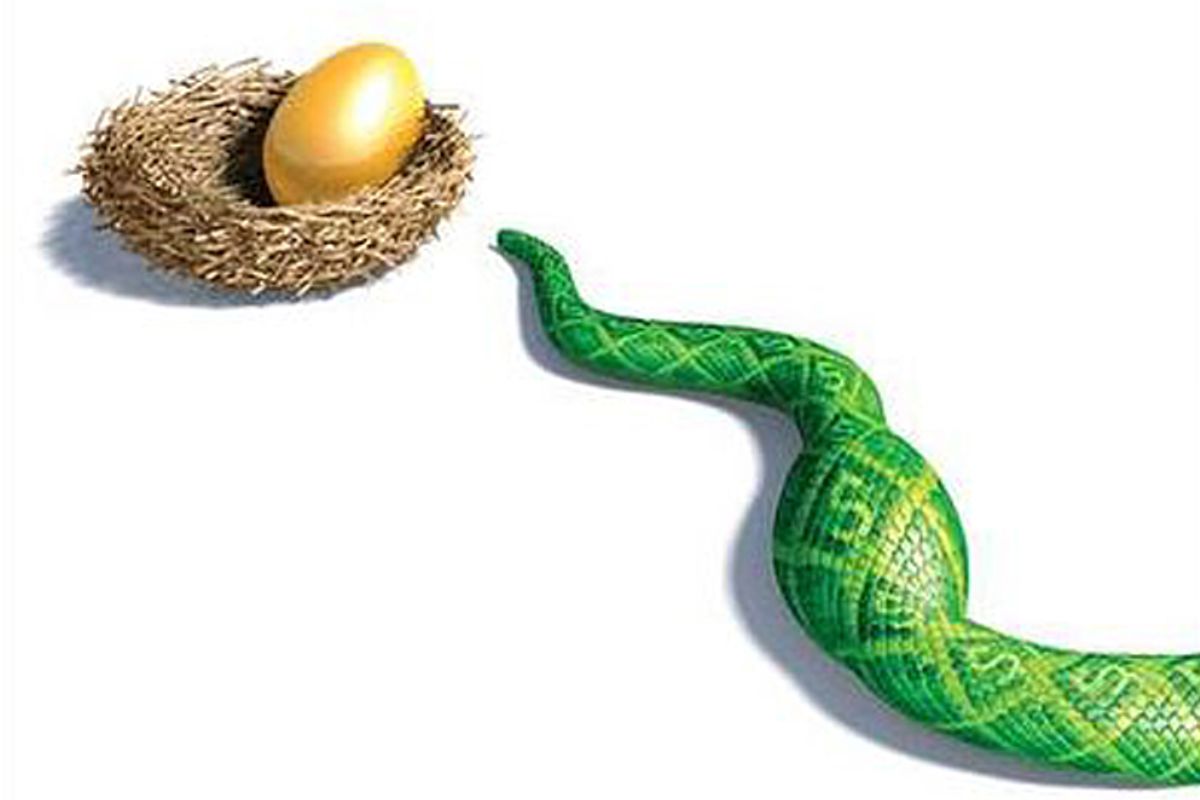 America is in the midst of a retirement crisis. Over the last decade, we've witnessed the wholesale gutting of pension and retiree healthcare in this country. Hundreds of companies have slashed and burned their way through their employees' benefits, leaving former workers either on Social Security or destitute -- and taxpayers with a huge burden that, as the baby boomer generation edges towards retirement, is likely to grow. It's a problem that is already affecting over a million people -- and the most shocking part is, none of this needed to happen.

As Ellen E. Schultz, an investigative reporter for the Wall Street Journal, reveals in her new book, "Retirement Heist," it wasn't the dire economy that led these companies to plunder their own employees' earnings, it was greed. Over the last decade, some of the biggest companies -- including Bank of America, IBM, General Motors, GE and even the NFL -- found loopholes, abused ambiguous regulations and used litigation to turn their employees' hard-earned retirement funds into profits, and in some cases, executive compensation. Schultz's book offers a relentlessly infuriating look at the mechanisms they used to get away with it.

We spoke to Schultz over the phone about the companies' deliberate deceptions -- and what they mean for the future of the country.

How did you first discover this "retirement heist" was happening?

In the late '90s I noticed that many companies, including a lot of the largest companies in the country, were hiring experts to change their pension plans. They all claimed they were doing it to make themselves more modern and better for the mobile workforce, but it struck me as unlikely that a lot of companies would be doing something that was apparently costing them money just to make employees happy. I ultimately figured out that they had found a way to use the accounting rules to profit from cutting benefits.

Even after reading the book, I'm  a little bit confused by how this actually worked. It was so sneaky.

It took me a long time to find an expert who could explain to me how these accounting rules worked, but when I finally pieced it together, it was enormously simple. Think of pensions as a debt. If a company can reverse a debt, it can record it as income. And that income is the same as if they got it from selling trucks or whatever it is the company sells. There were billions in promises to retirees for pensions and healthcare and death benefits and life insurance, and the companies figured out that if they cut or eliminated them altogether then they could get those billions in profit -- and even use them for executive compensation.

A striking example was Lucent, which inherited about 100,000 retirees when it was spun off from AT&T. From the beginning, Lucent kept saying, "We are crippled by these retirees," but the truth is, they also received more than enough actual money from AT&T to pay every dime of benefits for all the current and future retirees. Bit by bit, they cannibalized these benefits. They eliminated a death benefit, which is a very simple thing that says, if you work for us for 25 or 30 years, and you die, your widow will get $50,000 dollars or whatever per year. Lucent said they couldn't afford that. So they took it away and saved $400 million that had been set aside physically in the pension plan for these folks. At the same time, they awarded more than $400 million in bonuses to executives.

I kept on thinking about the market crash of 2008, where bankers were partly saved from public outrage because the public really didn't understand how the system worked. I remember thinking, "This is so complicated that I can't even really get angry about it, because I don't know how it all breaks down."

The retirees didn't understand this was being done to them. They just assumed, "Oh well, this company is affected like everyone else by the economy." They didn't see the role the companies played [in deceiving their employees]. The federal courts found Cigna documents that made it clear that the HR executives were discussing how, if the cutting of employees' benefits was handled right, there wouldn't be an employee backlash because the people wouldn't understand what was happening. And it's a pattern that has existed at a number of other companies.

It may seem odd to you that a person wouldn't know their pension is being cut, from, for example, $20,000 a year to $15,000 or $10,000. But companies have various ways of masking it. One way is to pay people a lump sum when they leave, saying, "Here's a lump sum so you don't need to wait until you're 65 to get a payment." Almost everyone who was attracted to that assumed it was the equivalent amount to a pension because they didn't know about the time value of money and discount rates and so forth.

Why should people who didn't lose their pensions care about this?

These were not gratuities. This was not something the company decided they would give you if they felt like it. This was something that was earned, that was deferred. The pattern after the Second World War was that as companies were growing quickly, they didn't have a lot of cash. So the deal was, they gave workers less pay then in exchange for pay later, and they called it a pension. If you worked for x number of years, you'd get your pay back. Same thing with healthcare.

So what we see now are millions of people who should not be in a difficult position financially putting more strain on society, now that we have to pay for their healthcare and public services. We also care because a similar, if reverse, pattern of misleading people has taken place in the public sector: Instead of cutting benefits and hiding the cuts, in the public sector it was more about awarding more benefits but hiding the award, because they didn't want people to see how their obligations are growing.

These days, nobody expects to have a lifelong career at one company anymore. And so the idea of having  a pension from one single employer seems very alien to a lot of people, especially young people.

Yes,  we're moving towards a more mobile workforce where people don't stay around for life at their jobs. But the companies were taking aim at the older people who had already been there for a whole career and were not mobile and didn't want to leave their jobs because they wanted to keep the money coming in and to pay their bills and build up their pension. The purpose of changing the plan wasn't to make it better for a mobile workforce. It was to take away what the nonmobile workforce had already built up.

Take the retirees of GenCorp. They had been promised their retiree health coverage in writing, but employers put little clauses into the plan documents that said, We reserve the right to change the benefits. The participants didn't know that clause was in there and assumed when their employers said, "If you take early retirement, we promise we'll continue your health coverage until you're 65 and you can qualify for Medicare." On that kind of promise people said, "OK, that sounds pretty good." After a few years, the companies turned around and said, "You know what, we can't afford that." When the retirees challenged them in court, the employers pointed to those little clues in small print deep in the document. So even when they had these benefits promised to them in writing, they legally lost. Union employees had physical legal contracts that had been collectively bargained that said, "We promise you lifetime coverage." So the employers claimed, "We didn't mean your lifetime, we meant the life of the contract," and it worked.

Do you think part of the problem is also we have a cultural disdain for the elderly in this culture?

Yes, they were human resources. They were something that could be converted into income, and the thought that this might affect them and their families of course was not the first thing on their list.

I did see a certain reflexive disdain for the plight of some of these groups. One of the earliest incidents where employers aggressively cut retiree health benefits by suing the retirees was with the John Morrell meat-packing plan in Sioux Falls, Iowa. People had this notion, "Oh, these meatpackers: Who are they to whine they're not getting this healthcare?" So I went out there and met with these folks. Among them were very elderly gentlemen who had worked at that plant from the time they were in high school. They took a time out to go to WWII and then went back and worked in the plant. They were your basic salt-of-the-earth folks. They did not have lavish pensions or retiree healthcare. It was these folks, the backbone of America, who were affected by this -- not a bunch of greedy old people.

In a few short years, a lot of baby boomers are going to be looking at their pensions and realizing those aren't there anymore. What kind of effect do you think that this is going to have on the economy and future of the country?

What we saw here were two generations that should have been the best off. They had everything: a pension, retiree healthcare, death benefits -- and look at what's happened to them. Now compare them to the current generation where people are working without pensions. If they have a 401(k), they're lucky if they have anything saved in it -- participation rates are low and people can't afford to put money aside and if they do, they don't know how to invest it, and if the market goes down they lose a lot of it. The 401(k)s don't work, and that's the thing that's supposed to be replacing pensions.

Pensions have been decimated for the people who seem to have the most secure retirement, and without Social Security a lot of these people would be destitute. In many cases, that's all they have. I think we're seeing how critical it is to see some absolute guaranteed benefits in old age. I could see that if people didn't have that, this country would start to look a lot more like a third-world country.

How does this change?

There are rules under pension law that are supposed to protect people. It would be helpful if they were actually enforced. There is a rule that says that pension assets are to be used solely for the benefit of retirees or the plan participants. That sounds pretty straightforward, but as I've noted in the book there are so many loopholes. In the book I talk about how they withdrew billions from the plans, sold assets from the plans, and used assets from the plans to pay executives. All of this is contrary to the intent of pension law, which is that the assets were there protected supposedly for the benefit of the people who earned them, and taxpayers subsidized it, meaning that if employers put money in, it would grow tax-free. That's why a lot of this is abuse of taxpayers. It's the company taking advantage of what should have been a tax break to help employees and using it to benefit shareholders and executives.

This was not a crisis that had to happen. It was manufactured. It wasn't an accident, and it's profited companies greatly.