Have harsh financial times led to cynical calculations about romance? 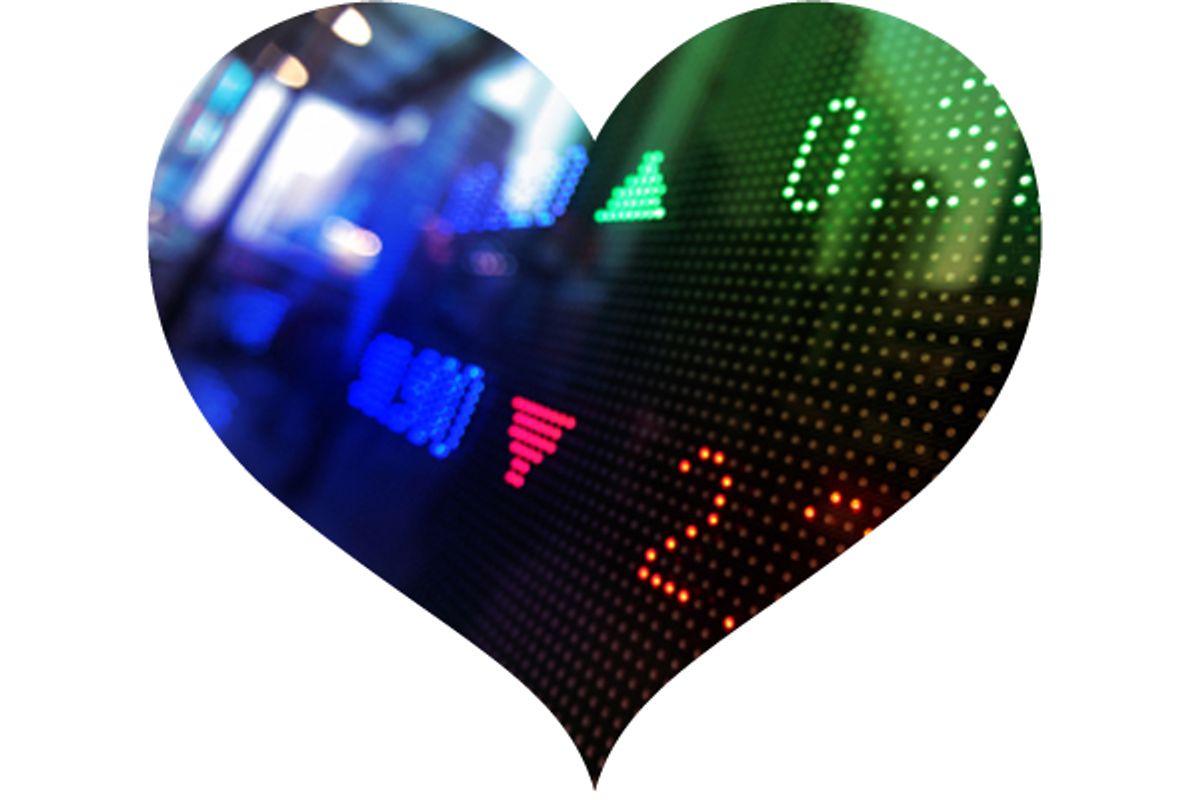 To hear some people talk these days, it's as if sex and love are stocks traded in the exchange.

Membership numbers for online dating sites have soared in recent years, and experts say it's in part because the recession has amplified desires for comfort and closeness. Despite that, or maybe because of it, people seem to be increasingly casting a cynical, calculating eye toward romance. The past few years have seen the explosion of "sugar daddy" dating sites like SeekingArrangements.com, research has emerged that applies the impersonal principles of economics toward relationships, and so-called experts have started dishing out romantic advice using the same jargon they might employ while lecturing on diversifying your financial portfolio. There have always been non-romantics, and relationships have always been commodified, but it seems this prolonged recession has exaggerated the relationship between money and romance.

Earlier this year, I wrote about attempts to boil down love into a simple equation -- OKCupid does it with its research blog, which applies game theory to all the user data it collects. In a study, "Sexual Economics: A Research-Based Theory of Sexual Interactions, or Why the Man Buys Dinner," presented last month at the American Psychological Association, Roy Baumeister of Florida State University simplifies the complexities of romantic relationships into an economic model where women trade sex for money, gifts and, ultimately, marriage. As he put it to me in an interview, "The point of sexual economics is that sex is a resource that women have. Men trade women other resources for sex." Mark Regnerus, author of "Premarital Sex in America: How Young Americans Meet, Mate and Think About Marrying," spoke to me in January about how the price of sex has hit an all-time low thanks to feminist advances that have left young women with fewer eligible male partners -- meaning men in this demographic have become a rare and valuable resource.

According to this econ-romance theory, men should be able to commit less and get more from women now. But the rise of sugar daddy websites suggests that the market is more complicated than that. Brandon Wade, the founder of SeekingArrangements.com, told me by phone, "I think there are a lot of reasons why this is happening -- obviously, the first being that the economy is really tough and people are looking for different ways of dealing with the financial crisis." He says sites like his have experienced "an influx of people who are used to the lifestyle they were experiencing 10 years go." He also points a finger at pop culture: "In the past, you didn't see as much as you do now of shows like 'Millionaire Matchmaker' and 'The Real Housewives' -- all showing off their bling-bling. You begin to absorb the same kind of values that you see on TV."

Earlier this year, Wade launched WhatsYourPrice.com, which lets "generous" men and "beautiful" young women "buy and sell first dates." The Econ 101 concept behind it is that for a beautiful and in-demand woman, there is an opportunity cost associated with a first date (or, more simply, time is money). So, men evaluate how much a particular woman is worth in their mind and place a bid; then the woman has to weigh her options, consider the competition, and decide whether that's what her time is truly worth. Compared to the sugar daddy approach, it's more straightforward, given the exchange of cold, hard cash, but it's also a risky gamble because all you're guaranteed is a chance to make the woman fall for you. Still, Wade lumps his new site in with sugar daddy sites as forms of "more pragmatic dating" -- and pragmatism is highly appealing in these harsh economic times.

This week, the site announced that it had figured out what it takes for an older suitor to effectively pay to "close the age gap." Based on a six-month study of dates successfully brokered through the site, they found that "men who want to date women over 10 years younger than themselves have to pay approximately 13% more than the average to close every year of age gap." A man 40 years older than his object of affection "will have to pay approximately 400% (or 4 times) more than a man who is only 10 years older to attract the interest of the same woman," read the site's press release. This may sound like mood-killing data, but it's just the sort of blunt financial-cum-romance advice that is visible these days.

It's terribly unromantic to talk about relationships in terms of economic principles, but there is something almost fitting about the pairing. After all, what can make us feel as vulnerable, or as powerful, as love and money?