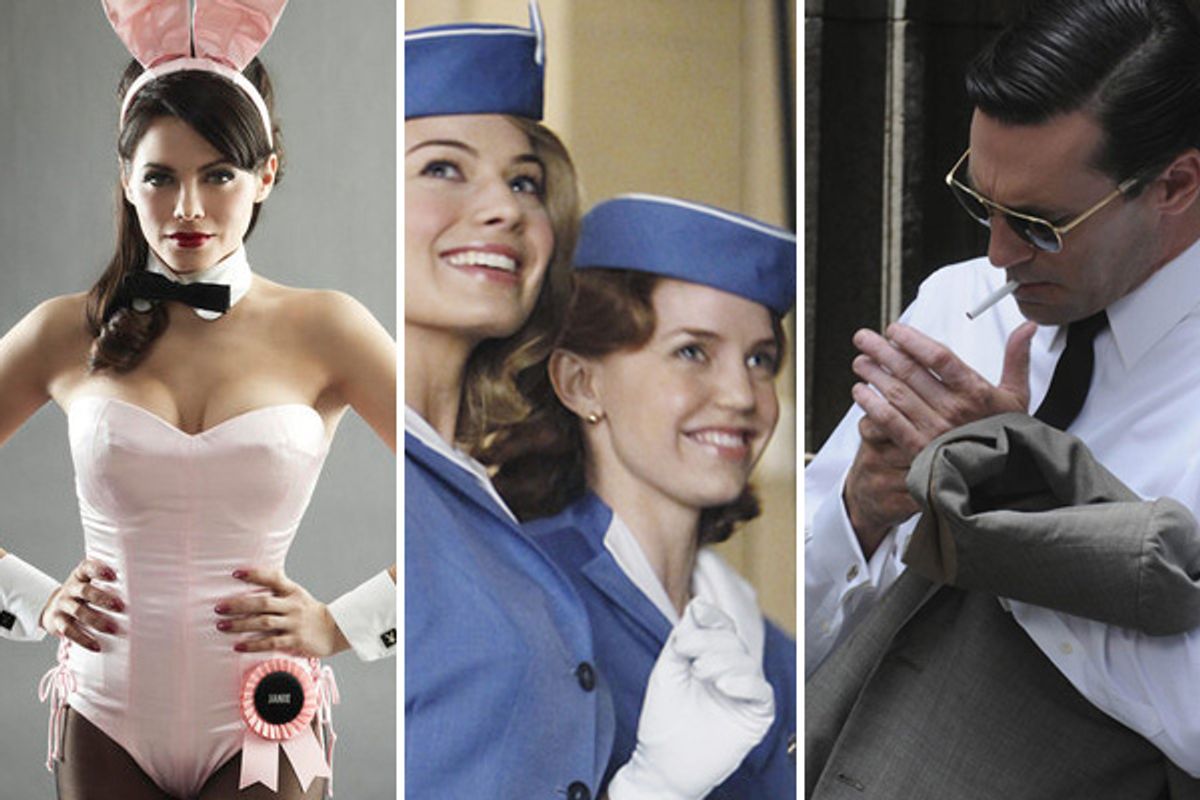 The fifth season of "Mad Men" may have been delayed until 2012 by contentious negotiations between AMC and series creator Matthew Weiner, but fans desperate for their fixes of fashion, Old Fashioneds and nascent feminism have three new shows set in the late 1950s and early 1960s to tide them over.

This week, NBC's "The Playboy Club" and ABC's "Pan Am" join "The Hour," a stylish look at a British TV news show that premiered in August on BBC America. It’s easy to suggest that these shows are trying to capitalize on "Mad Men’s" popularity -- which has spawned everything from paper dolls to a Banana Republic clothing line -- and it’s certainly true. But it’s more accurate to say that "Mad Men" tapped a vein of gender trouble that no one expected ran so deep. The clothes and the cocktails may be appealing, but they’re a way of setting us up to revisit a moment when women were starting to remake the world, and to take on the knotty questions of where the fight for women’s equality got derailed. The success of "Mad Men’s" imitators will depend on whether they give viewers substance to go with that style, or whether they build a series of arid, period theme parks.

That’s not to say that our stylistic fantasies of an earlier age can’t be valuable. There’s something refreshing about the late '50s and early '60s standard of beauty, an era when Marilyn Monroe, the world’s sexiest woman, fluctuated between a size 8 and a size 12. On "Mad Men," the sexiest woman, Christina Hendricks’ Joan Holloway, is also the biggest, clad in costumes that emphasize her curves. Romola Garai, the tough and sensuous female star of "The Hour," refuses to diet and has spoken repeatedly about food as a source of joy rather than anxiety. They may not have succeeded in permanently shifting the fashion world -- Hendricks still has trouble finding dresses for premieres and events -- but they are a powerful counterpoint to a world where a deviation from a sample size sparks pregnancy rumors and female news anchors confess to eating Cheerios as if they’re binging on candy.

But if shows set in the 1960s usefully debunk the idea that women need to starve themselves to be stylish, they also let us indulge in less healthy fantasies. Don Draper may turn himself into an anti-tobacco crusader as a strategic move and Bel Rowley may be shut out of smoke-filled rooms on account of her gender. But "Pan Am’s" stewardesses still serve martinis on orchid-adorned trays, and "The Playboy Club’s" waitresses still shill steaks for the menu’s standard buck-and-a-half price. When you’re fretting over the assassination of the president or the rearrangement of society's hierarchies of race and class, who has time to fret over cholesterol or cirrhosis? In an uncertain world, who doesn’t need a tipple, or in the case of Peggy Olson, to smoke some marijuana?

But even if we don’t want to go back to work in sex-segregated offices (and clubs and planes), there is something appealing about an era where, in the battle of the sexes, it was easy to pick out bad guys, and single out bad behavior. It’s impossible to miss the sexism in advertising executives’ treatment of Joan and Peggy; in the doubts that dog Bel as she sets out to make "The Hour" a vital and challenging news show; in the leers of young men who think themselves sexually sophisticated simply by perusing a Playboy Club menu; in a world that seems so stifling that escaping into a Pan Am-issue girdle feels like freedom.

And while there may be no perfect solution to the sexism these characters face at home and at work, we at least see the characters learning lessons that we’ll benefit from a generation later. The Playboy bunnies may get a little bit further than the Joan Holloways of the world by packaging their sex appeal for sale beyond a market of only one man. But as "The Playboy Club" makes clear, the freedom not to marry every man you shook your bunny tail at did not mean freedom from sexual harassment. There’s no question that trailblazers like Bel and Peggy opened up new professions and responsibilities for women, but we know now, from persistent pay gaps and underrepresentation of women in powerful positions, that their victories were the first salvos in a battle that is far from won. And the "Pan Am" stewardesses won their freedom of mobility by conforming rigidly to a corporate standard of beauty.

What’s both depressing and powerfully nostalgic about these shows is not necessarily that sexism was so virulent -- though that’s certainly upsetting -- but that we failed to capitalize on the nascent momentum that all of these shows explore. Some of those failures, like the inability to pass the Equal Rights Amendment, are a testament to the persistence of sexism in American society. And some of them are the result of fighting with ghosts. Should women and men be represented exactly equally in all industries? Are we really going to tell women that it’s wrong to take time out of the workforce to raise their children? Shows like "Mad Men," "The Hour," "The Playboy Club" and "Pan Am" resonate with us not because we want to return to the bad old days, but because we wish we had a clearer path toward a better future.