Empowerment, with a tail and ears 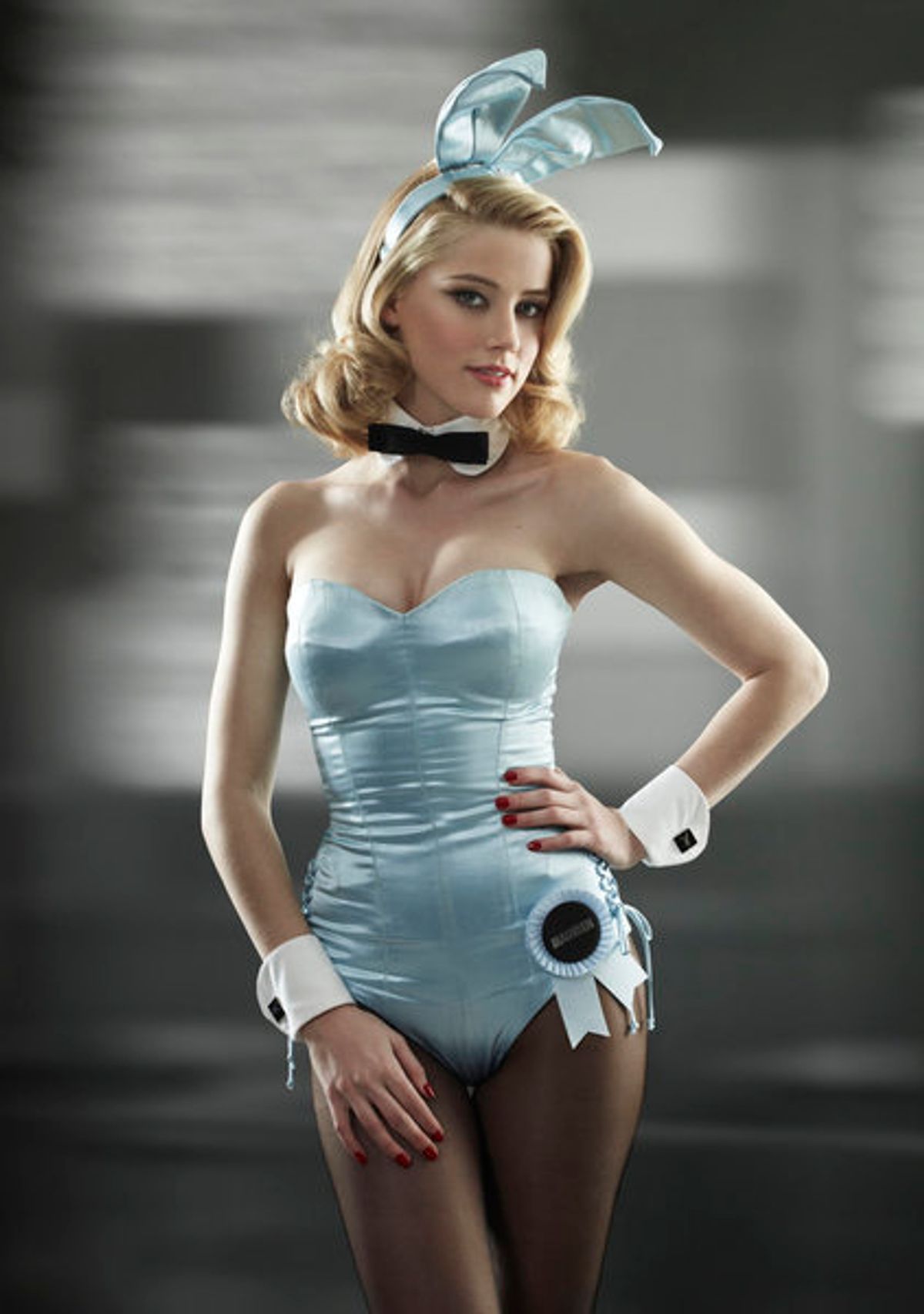 Did you know that the Playboy Clubs were ground zero for the feminist movement in the early 1960s? You didn't? Well, then, tune into NBC's new drama "The Playboy Club" (10 p.m./9 Central); you'll learn that and many other things, courtesy of the clubs' founder Hugh Hefner. The Playboy magazine mogul narrates the pilot and is featured on-screen as a shadowy but benevolent power-broker character -- a godlike force who's always glimpsed from behind or in silhouette, rather like a Doonesbury caricature of a real-life politician. "The world was changing," Hef says at one point in the pilot episode, "and we were the ones changing it, one bunny at a time." Another gem: "It was the early '60s, and the bunnies were some of the only women in the world who could be anyone they wanted to be."

Objectively speaking, Hef-the-narrator isn't wrong. Getting a job at one of the magazine's spinoff "gentleman's clubs" could indeed support a young woman and validate her longing for autonomy. But then, so could becoming an advertising copywriter like Peggy Olson on "Mad Men," the show that "The Playboy Club" desperately wants to be. Or a law clerk. Or an actress. Etc.

And there were serious downsides, as Gloria Steinem found out when she went undercover in the clubs -- downsides that the series seems oddly inclined to downgrade even when it's putting them front-and-center. The pilot's darkest moments have everything to do with the sort of environment that Hefner created at the clubs -- an environment in which women were servants, hostesses and fantasy playthings -- yet the show itself treats them ahistorically, as stuff that for whatever reason just happened. In the first few minutes of tonight's pilot, a young blond bunny named Maureen (Amber Heard), who just started at the club's inaugural Chicago branch, makes the mistake of rebuffing a gangster who wants to dance with her, then gets stalked into a storeroom and nearly raped. She resists with help from a dreamboat lawyer named Nick Dalton (Eddie Cibrian of "CSI Miami" and "Ugly Betty") and puts a spike heel into the goon's neck, killing him and splattering her outfit with blood.

I humbly submit that if a lavishly budgeted period drama wants to convince us that its milieu is 1) wonderfully liberating rather than faintly sordid and 2) catnip to female viewers, this is not the way to kick things off.

The rest of the hour is bland soap-opera nonsense with contrarian political readings glommed onto it like adhesive-backed bunny tails. Cibrian's Nick Dalton is the Don Draper figure, only much sweeter -- a crusading civil rights attorney and Kennedy-esque womanizing hunk who's entangled with the Chicago mob. After the storeroom killing, he invites Maureen to stay at his place -- for safety, of course! -- and helps her unzip her blood-soiled bunny costume. Later on, a mobster spots Nick escorting Maureen out of a back entrance of the club, and they have to kiss to sell the illusion that they're a couple. So romantic!

Maureen's fellow employees include Brenda (Natura Naughton -- now that's a centerfold name!), the club's lone African-American bunny and Maureen's saucy confidante; Laura Benanti (of Broadway's "Women on the Verge of a Nervous Breakdown") as Carol-Lynne, an aging bunny who sings at the club, sleeps with Nick, and fancies herself a backstage voice of authority and wisdom; and Alice (Leah Renee), who keeps her marriage a secret because the club only employs single women. (Alice's marriage, by the way, contains secrets of its own; they're easily the most surprising elements on the show.) David Krumholtz brings a welcome touch of 1940s character actor steeliness to the role of club manager Billy Rosen; but except for a couple of good, tense, authority-testing scenes opposite Benanti, he's on hand mainly to get exasperated with Nick, who half-smirks as if he's perpetually on the verge of breaking into a Sean Connery impression. (And man, I wish he would; this show needs pep.)

Can anybody remember the last time NBC aired a historical drama -- or a miniseries or movie -- that wasn't fatally compromised in some way? The only one that comes to mind is "I'll Fly Away", and that aired 20 years ago. For some inexplicable reason, the network's big-ticket period pieces -- I'm thinking specifically of its hit miniseries "The '60s" and "The '70s" and its perpetually promising but inconsistent "American Dreams" --  are hobbled by the same conceptual flaws as "The Playboy Club." They want to be both fun and edifying and end up being neither, and style-wise, they feel too much like Wikipedia entries with actors.

The series might have managed to overcome these problems (partly, at least) if it had a a strong point-of-view, however conflicted, toward what it's showing us. But it doesn't. The let's-all-revel-in-sexual-fantasy tone doesn't sit well with the opening scene of extreme violence and the many casual reminders of the bunnies' institutional subservience. When the club features then-abused R&B diva Tina Turner and her brutal husband/manager Ike as musical guests, it's impossible to tell if it's a comment on the club, Playboy and the era's gender dynamics, or just an ironic coincidence that the writers were too distracted or overwhelmed to do anything with. And the show's constant reminders of Hef's kindhearted, visionary optimism feel rote, as if they were written into a contract somewhere. (Maybe they were.)

"Hef doesn't care what color people are as long as they're interesting," Brenda says, explaining the clubs' hospitality toward black entertainers. That's undoubtedly true -- Hefner was a pioneering civil rights supporter at a time when it wasn't cool to be one, and he was also a great patron of the arts who almost single-handedly kept a lot of working musicians, black and white, in the middle class in the '70s and '80s by employing them at his clubs. But I can think of more elegant ways of getting these points across. A plot twist that finds Hef reversing the club manager's firing of a bunny who was once Hef's lover (weren't they all?) should remind us that Hefner the fictional character, like Hefner the real-life media mogul, had an unfortunate tendency to let Little Hef do the thinking for him; instead it feels like a deus ex machina, a Great-White-Father-to-the-Rescue moment.  The man loosened up a tight-assed country, revolutionized publishing, subsidized great fiction and journalism through his magazines, amassed a fortune and probably got laid more times than I've gotten up in the morning. Shouldn't that be enough for this series? Does he have to be Mr. Chips, Martin Luther King and the Wizard of Oz, too?

I've been assured that although "The Playboy Club" is a joint venture between NBC and Playboy Inc., Hefner himself had no creative involvement in the show beyond narrating it, supplying background information, and giving permission to write him into the scripts as a Charlie on "Charlie's Angels"-type character. (TV Guide says he won't narrate any other installment, but will continue to appear as a character.) Yet this opening episode still feels like a multimillion-dollar exercise in image maintainence. Given the show's status as a codependent branding venture, this was probably unavoidable. The show's producers could have done a tougher, more complex, honest series if they'd set it at a club that was somewhat like Hefner's but not actually Hefner's, and placed it on a pay cable channel with no content restrictions; but then it wouldn't have gotten a network-level P.R. sendoff and cross-promotion in Playboy, whose October cover features guess which new NBC drama. The instant the program's masterminds decided to target a broadcast network and put the word "Playboy" in the title, the series stopped being a creative work and became an infomercial -- an ad for a declining media empire that wants to be titillating but not dirty, adult but not mature; PG-rated porn, with a fig leaf of social responsibility.