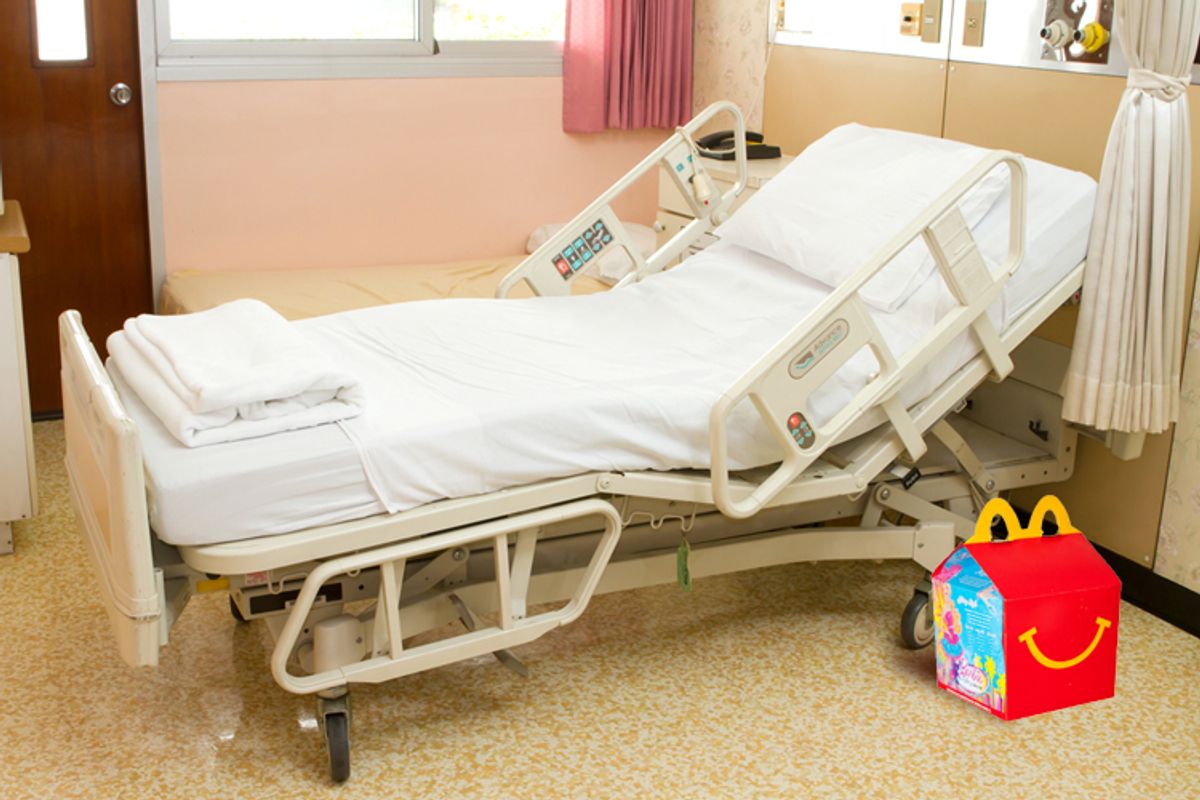 When Dr. Kerri Boutelle of Rady Children's Hospital in San Diego decided to do a research study on what children and their families order at fast-food restaurants, she didn't have to go very far. Rady Children's has a McDonald's right in the hospital.

McDonald's recently drew criticism from child nutrition advocates for resurrecting the iconic Ronald McDonald character, but Boutelle's research reminds pediatricians that Ronald never really left. Twenty-seven children's hospitals across the U.S. have a McDonald's on site, and there are many more at centers worldwide.

At a time when more than one-third of American children are obese and type II diabetes is rampant, it's hard to imagine why children's hospitals -- especially some of the very best -- would put a McDonald's front and center. But there's a McDonald's at the Children's Hospital of Philadelphia, which U.S. News recently ranked alongside Children's Hospital Boston as the No. 1 kids' center in the country. In an online review of the Children's Hospital of Los Angeles (ranked eighth by U.S. News), one parent observed that "McDonald's is the only 24-hour food source. (Odd, since their food puts people in the hospital.)"  When "Super Size Me" director Morgan Spurlock learned about the McDonald's at the highly regarded Texas Children's Center (ranked fourth by U.S. News), he called it "utterly irresponsible" and "a flagrant violation of the doctor's pledge of "Primum non nocere" (First, do no harm.)

Common sense makes it hard to argue with Spurlock, even though some equate those who share his view to "food police" preaching political correctness over personal choice. Yet to me, morality isn't the issue. The question is why do children's hospitals peddle McDonald's and other fast food, even when they know they'll get a black eye for doing it?

It's not a question many of these hospitals want to answer. All of the hospitals I contacted with a McDonald's on campus (Texas Children's, Children's Philadelphia, Children's Los Angeles and several others), either declined to comment or didn't return my calls. Even on their Web sites, the hospitals choose their words carefully. "It's important for children to have good nutrition and their favorite food, especially when they are sick and in the hospital," is how Rady Children's puts it. Texas Children's offers some pithy advice on how to order when you get in line at their McDonald's -- avoid the fries and don't super-size.

The silence -- and advice like that -- speaks volumes about just how uneasy these hospitals are about selling Big Macs and fries to kids with diabetes and other chronic illnesses. On the other hand, McDonald's Corp. was willing to explore these issues. Its answers, and a little history, sheds some light on what's behind the relationship between Ronald McDonald and children's hospitals.

"Like any business, when the restaurant is in or on the hospital campus, we lease the space and pay rent," said Dr. Cindy Goody, McDonald's senior director of nutrition. Follow the money -- the marriage between fast food and children's hospitals is, at its root, a side effect of competitive market forces in healthcare. Extra money is something that's always necessary in pediatric healthcare, as volumes of kids need more attention, even as the money paid by insurers and the government declines. Hospitals need to make up the difference. As one researcher put it: "The incorporation of McDonald's into a hospital environment must be seen ... as a compromise between health and economic goals, a compromise that may have been avoided in other financial climates."

Past reporting on this subject indicates that it's often the hospital that first approaches the restaurant chain, seeking to replace a revenue-losing establishment with one that makes money. The outpatient cafeteria in St. Joseph's Hospital and Medical Center in Phoenix, for example, was losing $19,000 a year before 1985. McDonald's agreed to renovate the cafeteria, pay a flat fee for the lease and turn over a percentage of the profits. When a McDonald's opened at Starship Children's hospital in New Zealand in 1997, the hospital was guaranteed either an annual base return or a generous percentage from sales (from 7.5 percent of sales up to $1.29 million to 8.5 percent of sales above $1.69 million).

Once they're in, McDonald's and other fast-food outlets can be difficult to get rid of. Several years ago, the Cleveland Clinic, one of the nation's most respected centers, made the decision to remove McDonald's from its premises. McDonald's fought back, refusing to terminate its lease early. It remains open today. In Canada, there have been similar efforts to close fast-food restaurants in other hospitals. Toronto Sick Children's Hospital recently shuttered its Burger King franchise, though it took some public shaming for that to happen -- a physician started a Facebook page demanding that the hospital make a change. "I've seen doctors remove their name tags when they're in line, ordering super-value meals," said Dr. Vishal Avinashi, who led the effort. "There's obviously some guilt associated with that." Nevertheless, the closure comes at a price. Over the years, Burger King raised more over $2.5 million for the hospital's foundation.

For McDonald's, the constant traffic through a hospital is a consistent source of profits. There are also some unexpected benefits for the company as well. Since McDonald's is the archetypal bad guy in the war against childhood obesity, a hospital location vastly enhances the image of the company and its food. A 2006 study that looked at customers' impressions of McDonald's found clear evidence that parents who bought fast food at the hospital-based restaurants believed that McDonald's Corp. was a hospital benefactor. More remarkably, they had positive perceptions of the healthiness of McDonald's food. The researchers couldn't explain why, but the company agrees. "Our menu fits into a healthy, balanced and active lifestyle. Children's well-being requires an ongoing effort and we're committed to being part of the solution to childhood obesity," said Dr. Goody. Children's Hospital of Philadelphia has even taken diabetic patients on field trips to its McDonald's to learn how to stay on a diet.

Over the years, McDonald's has found various ways to answer questions about its presence in hospitals and assuage its critics. At first, the company relied on cold pragmatism. 'We go where there are people who need to eat, and there are a lot of people in hospitals,'' said Ann Connolly, a former spokesperson for the McDonald's Corp. back in the 1980s. More recently, the company has been pointing out it recent efforts to offer healthier menu options.

But it's not evident that kids and their parents care to choose those healthier choices. That study by Dr. Boutelle showed that even when apple dippers and milk jugs were on the menu at Rady Children's, families rarely ordered them. Apple dippers were purchased by anywhere from 0.3 percent to 3.6 percent of kids; milk from 1.1 percent to 6.6 percent of the time, depending on the age of the child. Almost no children purchased a yogurt parfait, apple juice or orange juice. On the other hand, french fries, soda, cheeseburgers, apple pie and the Big Mac were the most often-ordered items.

McDonald's has its defenders. Put yourself in the shoes of a parent of a child with severe congenital heart disease, or a child with cancer on chemotherapy. Imagine having to come to the hospital over and over again for invasive and painful treatments. McDonald's represents normalcy for many kids and their families, and could be a fun, comfortable place to go under very grave circumstances. It's also worth noting that McDonald's Corp. is the main backer of Ronald McDonald House Charities, which has built houses for families of hospitalized children to stay at, and over the years has donated hundreds of millions of dollars to help kids with cancer and other chronic illnesses.

As Spurlock writes: "The doctors at Texas Children's Hospital told me they had young patients who were dying of cancer, and it was hard to get them to eat anything. At least these poor kids would eat some fries, take a bite of a burger: food they were familiar with. It was junk that they had been eating all their lives."

That sums up a difficult alliance. I wonder, for example, if some of these children's hospitals would even exist if not for their relationships with corporations like McDonald's and others paying rent and sharing profits. It's impossible to know what might not have been, but nobody wants kids losing access to something as fundamental as healthcare. So we close our eyes, sign the contract, hand Ronald McDonald our soul, and let our patients eat their french fries with packets of fancy ketchup.