If the president wants to foster peace and be on the right side of history, he must back the Palestinian U.N. bid 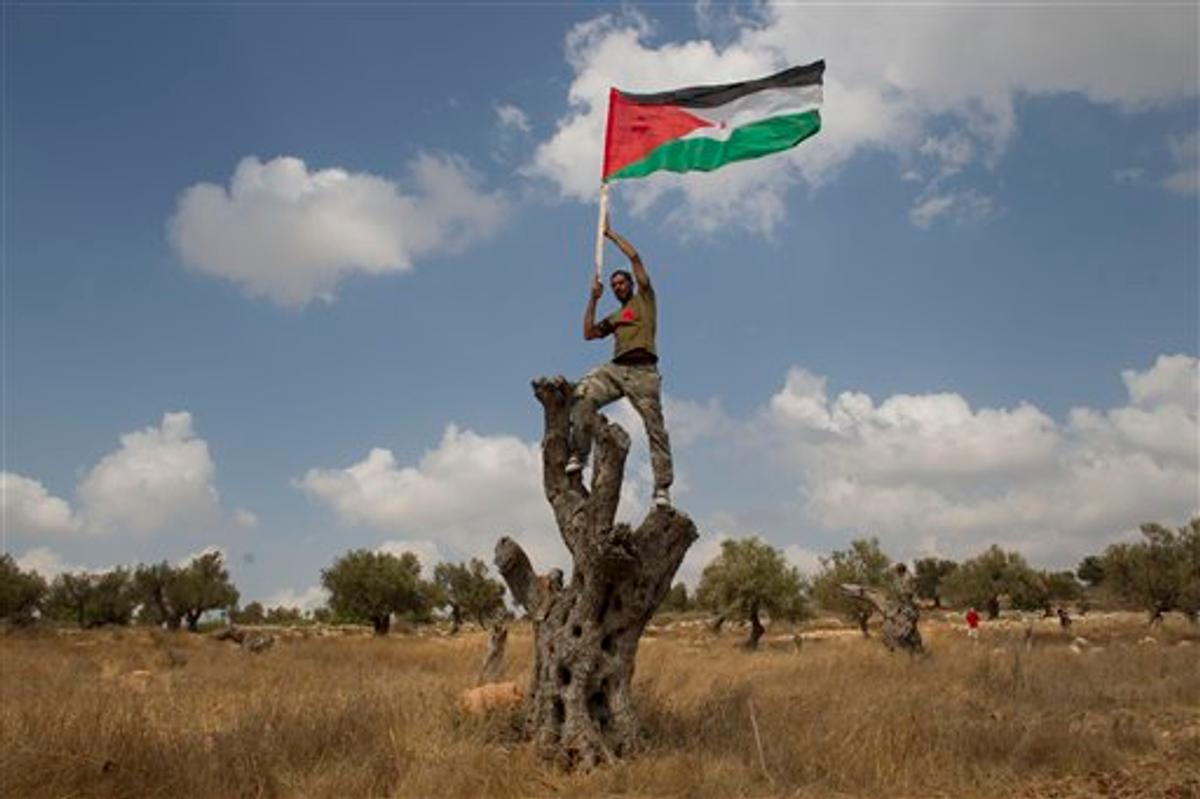 A Palestinian waves a flag during a demonstration in the West Bank, Friday, Sept. 9, 2011
--

The president is not wrong in thinking that this would be better handled in negotiations between the Palestinians and Israel. It would be wonderful if Israel itself were to sponsor a Palestinian state, but this is not going to happen as long as Prime Minister Benjamin Netanyahu is in power.

He has spent his entire career trying to avoid Palestinian statehood with delaying tactics and maneuvers -- seemingly willing to negotiate everything anywhere, but in reality putting up every obstacle he can in the path of peace and permanent settlement with the Palestinians.

Not that the Palestinians are guiltless in this stand off. They have had offers and opportunities they have not taken. But the entire Middle East is now in a state of flux and transition, and, as a practical matter, to try to keep the Palestinians frozen in their status as an occupied people without political rights is to ask for serious trouble -- both for Israel and the U.S. The next Intifada will be far more destructive than the last two.

As a moral matter it is simply time to let the Palestinians have their state just as Harry Truman recognized that the Jews, after all they had been through in Europe in World War II, should have their state in 1948.

Many Israelis understand this. Former Defense Minister Binyamin Ben-Eliezer told The New York Times that "the world is tired of this conflict and angry at us because we are viewed as conquerors, ruling over another people. If I were Bibi Netanyahu I would recognize a Palestinian State. We would then negotiate borders and security." But Netanyahu comes from the so-called "Revisionist" wing of Zionism that is reluctant to give up any part of what they consider the biblical land of Israel.

When David Ben Gurion on May 14th, 1948, declared that the state of Israel would come into being at midnight, America responded with de-facto recognition almost immediately. But the Soviet Union came through first with de-jure recognition, something the U.S. did not grant until an elected government had been formed in January of 1949.

Even with the two superpowers onboard, the U.N. Security Council did not grant Israel U.N. membership until May 11, 1949 -- a full year after the state was declared -- and after a long fight to physically secure its borders.

Palestine might come into being in reverse order -- declare sovereignty now, gain admittance to the U.N., and then negotiate the borders with Israel, as Ben-Eliezer suggested.

There are many who say there are dangers involved in a Palestinian state, and they are right, just as those in Truman's State Department, including George C. Marshall, were right in warning that the creation of a Jewish state would cause a sea of troubles.

Richard Perle and David Frum, in their book, "An End to Evil, How to Win the War on Terror," submit that "in the Arab and Muslim World, the Palestinian issue has never been about compassion, mercy, or even justice. First and always, this issue has been about vengeance…", i.e., "the destruction of Israel and the re-conquest of the Holy Land." This might be true of some, but this is akin to saying the Jews in Israel want to take over Jordan just because that was an original "revisionist" goal back in 1947, or because David Ben Gurion once put feelers out to the British and French in 1956 that Jordan should be divided up between Israel and Iraq. Yes, some Arabs still might want to destroy Israel, just as some Israelis want to expel all the Palestinians, but that does not represent the vast majority nor government policy in either Israel or the Arab world.

The Obama administration tried its best to talk the Palestinians out of going to the United Nations to legitimize their state but failed. Given the administration's record, this failure was entirely predictable. Obama came into office seeming to promise a renewed energy toward trying to solve the Palestinian problem, following President Bush's near-total support for whatever Israel wanted.

Obama went eyeball to eyeball with Netanyahu over settlements, and the Palestinians saw that Obama blinked first. It was obvious then that Obama might talk a good game, but that the Israeli tail was always going to wag the American dog. The sight of Netanyahu who, having defied and insulted the American president, addressing a joint session of Congress with congressmen and senators of both parties jumping to their feet like jack-in-the-boxes to show their support, was all anyone needed to understand Israel's power in the American Congress.

The Democratic Party has to be mindful of pro-Zionist political support. But it is in America's strategic interest, and ultimately in Israel's interest too, to lance the boil of the Israel-Palestinian conflict.

If it was the right thing to do to recognize the state of Israel when it was first born, it is time now to grant the same rights and privileges to the Palestinian people. The Obama administration is always talking about being on the right side of history in the Middle East. The United States could abstain, if it must, but vetoing Palestinian nationalist aspirations would put us on the wrong side of history.