"8," Dustin Lance Black's play about the marriage trial, reenacts a pivotal moment in a revolutionary movement 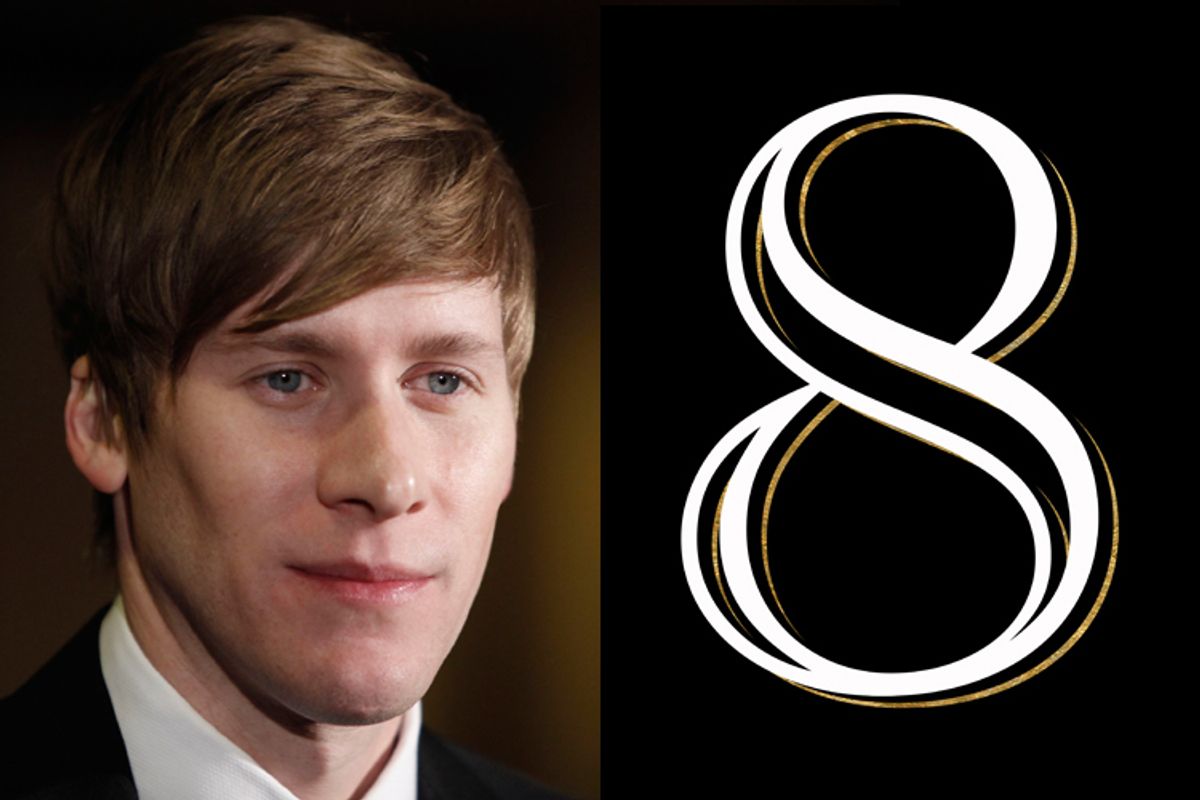 Just a few hours after the curtain fell Monday night on "8," the theatrical re-creation of California's gay marriage trial, the sun rose Tuesday on the first day of gays serving openly in America's armed services. With the repeal of the detestable "don't ask, don't tell" law, it looks like the gay revolution will follow the path well worn by the civil rights movement, which got traction with President Truman's order integrating the military in 1948 and took off when the Supreme Court outlawed school segregation in 1954 in Brown v. Board of Education.

Tempting as it is, the comparison is misleading. Likening the gay movement's triumphs in federal court and the military to the civil rights movement's accomplishments obscures the real meaning of what the gay movement has achieved. And how America has changed in the six decades since Harry Truman courageously signed that order and Justice Earl Warren persuaded the Supreme Court into unanimity on the unconstitutionality of racial caste. No politician -- no president and no Supreme Court justice -- put his or her political capital and power behind the gay victories in the military and the courthouse. The gay movement won them, and continues to win them, largely by itself. It's a bootstraps movement.

That there would be no Truman became alarmingly clear in 1993. At the time, the military had a policy that homosexuality was grounds for discharge from the military, period. In numerous public statements, at fundraisers in the gay community and elsewhere, then-candidate Bill Clinton had honorably, but, in retrospect, naively, promised to end the policy. Gay activist, and longtime Friend of Bill, David Mixner, famously called him "our Truman." But when the resistance, first from the religious right and then from more mainstream players, like Colin Powell, chairman of the Joint Chiefs of Staff, surfaced, Clinton folded and signed on to "don't ask, don't tell." Worse, Congress made the policy a law. David Mixner chained himself to the White House fence.

Over the course of the next 18 years, the gay movement undid DADT itself. The two people left in the movement headquarters when DADT was passed, Dixon Osburn and Michelle Benecke, borrowed a couple of computers and started the Servicemembers Legal Defense Network. At first the SLDN had the modest goal of just stopping the military from "disappearing" the service members it thought were gay in enforcing "don't ask, don't tell." Get a lawyer in, they figured. Citizens have a right to a lawyer. Get a lawyer and you start to look like a citizen. Citizens don't disappear.

In the ensuing decades, the SLDN, and, more recently, other gay movement organizations like Servicemembers United and the Human Rights Campaign, pursued the cause. Sure, the culture was changing after 1993, but the gay movement also changed the culture. They told the stories of the gallant men and women who only wanted to serve their country. They made a case when Pfc. Barry Winchell was murdered in his bed by a homophobic bunkmate. The polls began to reflect a shift in public opinion.

All the major congressional players in the repeal tell stories of meeting some gay service member who taught them the lesson of their gallantry. Sen. Kirsten Gillibrand met Lt. Dan Choi. Rep. Patrick Murphy, a war veteran, tells of "a battle buddy in one of the toughest courses in the Army [who] got kicked out because he happened to be gay" -- only to be replaced by someone who "couldn't carry his lunch."

Because DADT was a law, even if President Obama had the courage of a Harry Truman, he could not just sign it away. But everyone knew that nothing would change in Congress unless the Pentagon he supposedly commanded got behind repeal. Eventually, it did. But it was the Pentagon's timetable for a study that put the repeal into the lame duck session of Congress, where it had almost no chance of getting through. A senior congressional staffer who worked the issue for two years says that it was clear to everyone that important people at the White House would have been happy to see it delayed and defeated.

Finally, after a federal judge declared the law unconstitutional in a case brought by the Log Cabin Republicans, Secretary of Defense Robert Gates gave a press conference urging Congress to act. The White House didn't even have the courage to include the families of gay and lesbian service members in the kickoff of the first lady's consummately nonthreatening "Joining Forces" initiative for military families last April. Unlike Harry Truman, Barack Obama didn't want to get ahead of the curve.

Even if the gay revolution never found its Truman, Perry v. Schwarzenegger, the constitutional challenge to Proposition 8, California's gay marriage prohibition, does look a lot like Brown v. Board of Education. But when Perry or one of the other marriage cases reaches the Supreme Court, they won't be looking at Earl Warren, the California Republican who crafted an opinion in Brown that all nine Justices were willing to sign. Today's court is harshly divided along ideological and partisan lines, with four Democratic appointees often pitted against five Republican choices. Although the gay activists who brought Perry are counting on Republican-appointed Justice Anthony Kennedy to rule with the liberals, Kennedy's liberalism has not been much in evidence recently. Even though they have secured the representation of two of the finest lawyers in America, liberal David Boies and conservative Ted Olson, they may very well lose.

If they do they can take comfort that John Scopes lost, too. Despite having Clarence Darrow as his lawyer, he was convicted in 1925 of teaching Charles Darwin's theories of evolution to his high school science class. But Scopes, brilliantly conscripted as a stand-in for the victims of Sen. Joseph McCarthy in Jerome Lawrence and Robert E. Lee's 1955 courtroom drama "Inherit the Wind," won the culture war. Almost all American science classes teach Darwin's theory. By 2011, even über-conservative candidate Rick Perry, who thinks evolution is just a theory, is still not willing to argue that teaching evolution should be criminal.

Sometimes a trial is just as valuable for the drama it creates as for the rulings it engenders. Because the legal system puts a high premium on reasoned argument and demonstrable evidence, the appeals to religion and other nonfalsifiable moral beliefs that drive the enactment of laws like Tennessee's Monkey law and California's Proposition 8 sound weird in a courtroom. It is possible that "8," written by Lance Black, a gay screenwriter who won an Oscar for "Milk," will be the biggest payoff the movement gets from the gay marriage case.

Everyone in the Perry case, including the trial judge, Vaughn Walker, knew all along the proceedings would be the stuff of compelling drama. Somewhat hastily, Walker arranged to have the proceedings simulcast. It would have been the O.J. Simpson trial of the gay revolution. The opponents of gay marriage, perhaps sensing how they would come off on Court TV, went all the way to the Supreme Court to stop the courtroom drama, which they did, garnering, ominously, Justice Kennedy's critical vote to shut the cameras out.

Had the cameras run, anyone with a television could have met the fundamentally decent, boringly normal plaintiffs, who only want to lead their lives without explaining their marital status every time they check into a hotel or go to a Little League game. They would have seen a handful of "witnesses" testifying to the harmfulness of same-sex marriage reduced to subatomic particles by David Boies.

"I've seen a lot of bumper stickers," Boies said later. "But I haven't heard a lot of evidence."

Gay activists have been trying to open the proceedings ever since. Americans for Equal Rights, which sponsored the litigation, ran the transcripts on its website. California filmmaker John Ireland hired a crew and reenacted the whole thing for the website MarriageTrial.com. The gay plaintiffs applied to the judge now in charge of the trial to make the record, including the video recording, public.

Just hours before "8" opened as a fundraising event for Americans for Equal Rights, the current judge in Perry ruled that the trial recording should be opened to the public. Presumably, the Proposition 8 defenders will try again to get the high court to stop it.

The play may actually be a better choice, now. Black hobbled himself by taking material almost entirely from the transcript itself, which, like most trial transcripts, sounds oddly stilted. Conversation at trial is constrained by the conventions of examination and cross-examination and summation, which are the bones and sinew of the legal system, but rarely lead to soaring drama. Still, edited by his fine hand and enriched by his mischievous introduction of the political characters from outside -- the antigay activist Maggie Gallagher, played by the incomparable Jayne Houdyshell, and Freedom to Marry's adorable Evan Wolfson, amusingly handed to gay legend Larry Kramer -- the two-hour evening managed to entertain and educate at the same time. By the time the Ted Olson character made his summation, that the argument we "don't know" what harm will be done cannot be used to deprive American citizens of a fundamental human right, we have learned enough about the characters to care about their rights. And that's what a courtroom drama does, when it's at home.

Time and again, the production proffers David Boies' seminal insight that the witness stand is a "lonely place" and opinions from the public square, when confronted with the rigors of actual proof, "just melt away." Not only does "8" repeat that lesson, it shows it, giving the audience the scary, hate-filled TV commercials the Proposition 8 advocates ran and then letting them see what happened to those assertions when subjected to cross-examination by Boies.

The producers intend "8" to go to schools and community groups, doing the essential work of changing the culture. It's tough, expensive, time-consuming work to change culture. But it's something the theater can do, maybe even better than judges.

The gay community has always included gifted wordsmiths like Black and playwright Tony Kushner, whose "Angels in America" introduced millions of Americans to the aspirations of its gay population in the midst of the AIDS plague. In the opinion of many, Moises Kaufman's "Laramie Project," about the murder of gay youth Matthew Shepard in Wyoming, did more to save lives than all the hate crime laws in America. "8" is no "Angels in America." But it may do the job.

More important, it's a job the gay movement can do for itself. The days of political leaders like Harry Truman and Earl Warren appear to be behind us. Barack Obama and Anthony Kennedy are not the enemy, of course. But with friends like those ...