Fed to shift $400B in holdings to boost economy 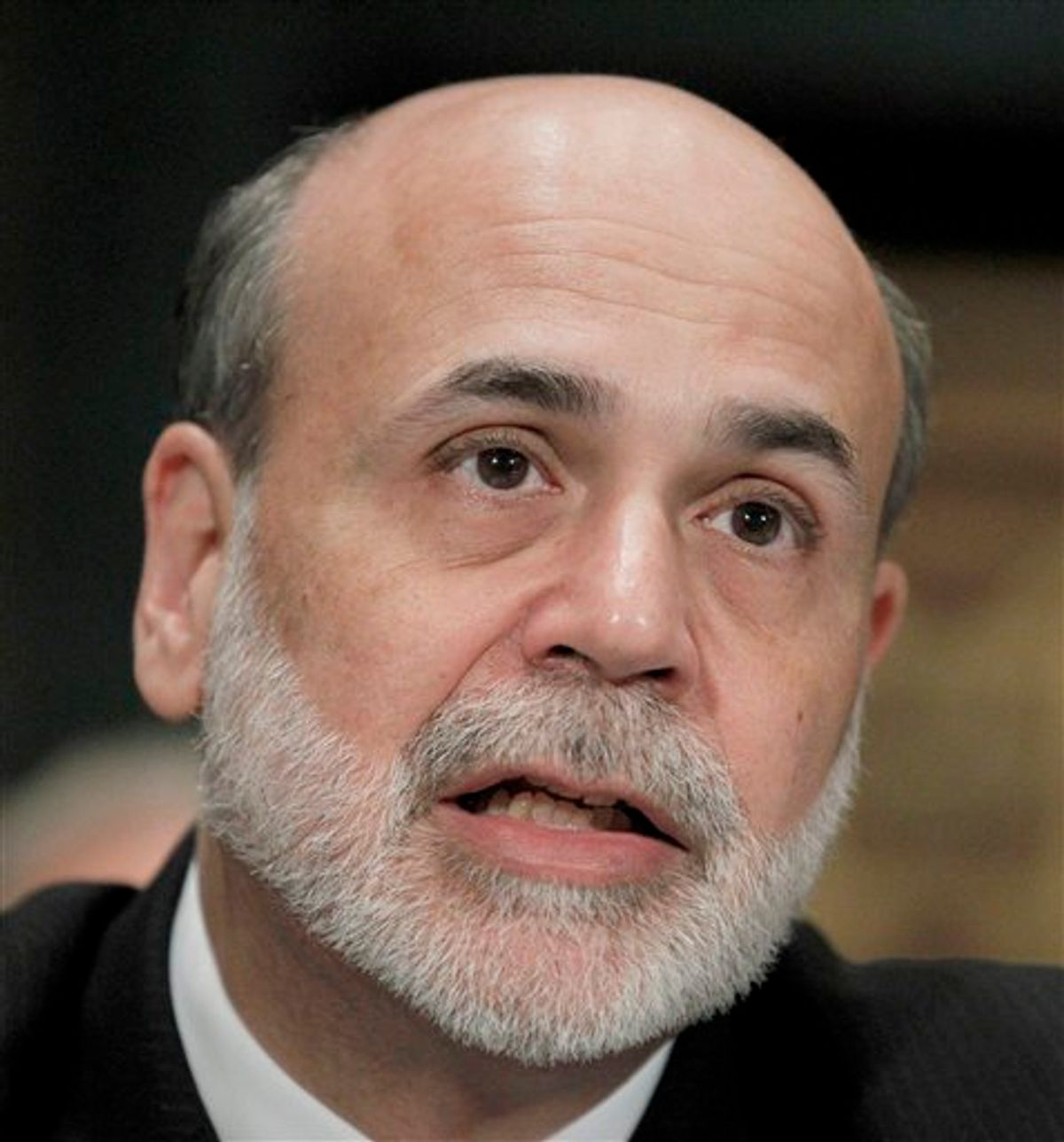 FILE - In this Sept. 30, 2010 file photo, Federal Reserve Chairman Ben Bernanke testifies on Capitol Hill in Washington. The last time the Federal Reserve came up with a big plan to help the economy, it totaled $600 billion and touched off a 28 percent rally in the stock market. But if the Fed takes any new steps, as many people expect, it wont look anything like that. Look for small ball, not a home run. Operation Twist, as Fed-watchers are already calling it, in a nod to economic history, probably will help the economy and the stock market. (AP Photo/Manuel Balce Ceneta, File) (AP)
--

The Federal Reserve says it will sell $400 billion of its shorter-term securities to buy longer-term holdings, its latest effort to boost a weak economy.

The Fed's move to rebalance its $2.87 trillion portfolio could lower Treasury yields further. Ultimately, it might reduce rates on mortgages and other consumer and business loans.

The Fed also said it will reinvest its holdings of mortgage-backed securities, which would help keep mortgage rates at super-low levels. The Fed had previously reinvested the interest and principal into Treasury purchases.

Fed policymakers announced the moves Wednesday after a two-day meeting. Three members dissented from the decision.

"The actions the Fed has taken are helpful," says Josh Feinman, global chief economist at DB Advisors. "They will help hold down long-term rates, but they're no panacea."

Stocks fell immediately after the announcement. The Dow Jones industrial average dropped 100 points. The yield on the 10-year Treasury note tumbled, and its price rose.

In its statement, the Fed noted that the economy is growing slowly, unemployment is high and housing remains in a prolonged slump.

As a result, the Fed has directed the New York Fed to purchase Treasurys with remaining maturities of six to 30 years, and to sell an equal amount of securities with maturities of three years or less.

Many analysts have said the shift in the Fed's portfolio could provide modest help by reducing borrowing costs and perhaps raising stock prices. Others say it won't help and warn that the move could escalate inflation.

In June, the Fed completed a $600 billion bond-buying program that may have helped keep rates low.

Expectations that the Fed would expand its holdings of long-term securities, along with fears of another recession, have led investors to buy up U.S. Treasurys. Treasury yields have dropped in response.

Once the Fed announced last month that it would expand its September policy meeting from one to two days, economists have anticipated some new action from the Fed. Chairman Ben Bernanke had said the Fed was considering a range of options.

The central bank is under pressure to revive an economy that has limped along for more than two years since the recession officially ended.

In the first six months of this year, the economy grew at an annual rate of just 0.7 percent. The housing market remains depressed. The unemployment rate is 9.1 percent. In August, the economy didn't add any jobs, and consumers didn't increase their spending on retail goods.

Most economists foresee growth of less than 2 percent for the entire year. They say the odds of another recession are about one in three.

The Fed has offered its own bleak outlook. At its August policy meeting, it said the economy would likely struggle for at least two more years. As a result, it said it planned to keep short-term rates near record lows until mid-2013, as long as the economy remained weak.

The Fed's move Wednesday came despite a rift within the central bank. Three members also dissented from the Fed's decision at its August meeting -- the most negative votes in nearly two decades. The three, all regional Fed bank presidents, have said the Fed's policies may be raising the risk of high inflation.

Bernanke's policymaking has also incited criticism from congressional Republicans and GOP presidential candidates. Some have argued that the Fed's $600 billion bond-buying program, which ended in June, raised inflation pressures, weakened the dollar's value against other currencies and contributed to a spike in oil prices.

On Monday, the four highest-ranking Republicans in Congress sent Bernanke a letter cautioning the Fed against taking further steps to lower interest rates. Their letter suggested that lower rates could escalate the risk of high inflation.

Texas Gov. Rick Perry, who is seeking the GOP nomination for president, has gone so far as to say Bernanke would be "almost treasonous" to launch more bond buying.

The Fed's efforts to stimulate the economy through low rates are occurring at a time when Congress is focused more on shrinking spending.

Obama's proposals face an uncertain fate in Congress. Republicans have dismissed his deficit-reduction plan and have focused on efforts to reduce spending and keep taxes low for everyone.