The secrets of medical decision-making

Doctors are giving patients more freedom to choose their own treatment. Two MDs explain what that really means 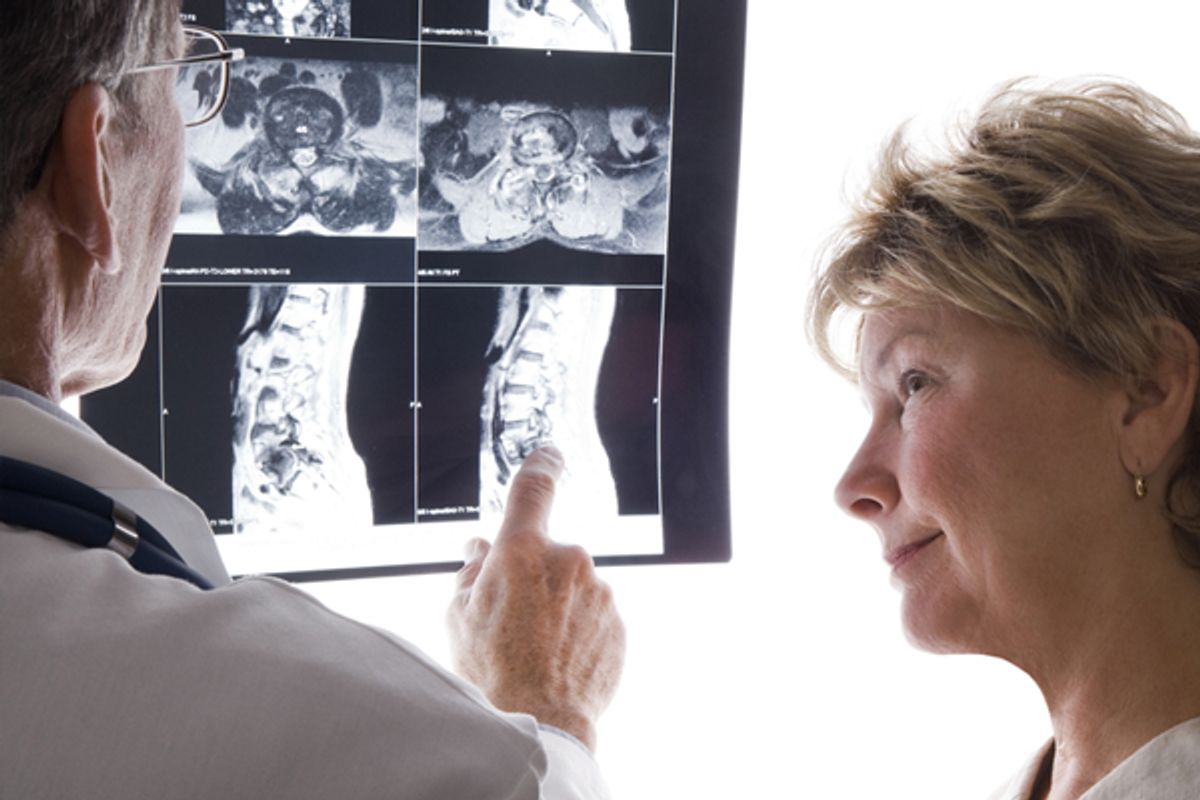 On a cool October evening, Julie Brody noticed a tiny bump on her left arm. When she visited a radiologist a few days later, he gave her the news all of us dread: He had found two cancerous lumps, one in her breast, and one in her lymph node. Immediately, she faced a number of crucial, life-of-death decisions: What oncologist should she choose? Should she undergo radiation? Should she have a mastectomy? These are the kinds of medical decisions nobody wants to make, but American patients are now considering more carefully than ever.

Over the last few decades in the U.S., the paternalism of the medical establishment has begun to crumble and patients have been given more and more power in deciding their own treatment for everything from cancer to disk pain. As a result, it's increasingly becoming important to understand why certain people make, for example, the choice to eschew chemotherapy in their cancer treatment while others make it their first choice.

According to "Your Medical Mind," a new book by Dr. Jerome Groopman, New Yorker staff writer and author of "How Doctors Think," and his wife, Dr. Pamela Hartzband, an endocrinologist and educator at Harvard Medical School, the decisions we make as patients have a lot to do with our personalities and personal history. Using a combination of case studies, including Brody's, and medical data, the book divides patients into four groups -- believers, doubters, maximalists and minimalists. Understanding which of those groups we belong to, they argue, goes a long way toward helping us take control of our own healthcare.

Salon spoke with Groopman and Hartzband over the phone, about the disappearance of doctor paternalism, the real meaning of medical statistics and the problem with "House."

Why is it important that we figure out why some people make different treatment choices than others?

Dr. Jerome Groopman: In a great deal of medicine, there is no one right answer. It's a gray zone. Each of us has a different set of values with regard to risk and benefit, so choices are made on a very individual basis. As the patient, you are the one who is going to live with the decision, and you want to have confidence that you made a decision that was right for you as an individual.

Dr. Pamela Hartzband: We don't adopt or endorse the old model of paternalism, but if you want to advocate for yourself, in order to do it effectively, you need to understand why one choice appeals to you rather than another and sometimes there are subtle or hidden forces that are trying to influence you one way or another. We point out in the book that the average American spends more time being exposed to drug ads on television than they spend with their doctors. You spend 16 hours a year watching those ads. You don't spend 16 hours a year with your doctor.

There's been this shift in the American health care system toward giving more control to patients in their relationships with their doctors. Why?

J.G.: There were two factors. The first was the AIDS epidemic, which I had a lot of experience with myself: Starting in 1980, I did a lot of HIV-related work. With gay men being hit disproportionally by the virus, there was a lot of political activism that was linked to it. Gay men wanted to make sure, rightfully, that what was being done was right for them and in their interests. The other was the women's movement. It took a long time for surgeons to shift from mastectomy to the removal of a lump [in their treatment of breast cancer]. Part of that was the burst of feminism. You had these two groups who were treated in a particularly paternalistic way by the medical establishment and they helped spur the changes [in treatment] in the '60s and then the '70s and then full force in the '80s.

It's funny. I'm originally from Canada. I only experienced the American healthcare system in the last five years, and one thing I did notice is that here there is a much larger emphasis on my choice. I have problems related to a ruptured disk and the first time I went to the neurologist in the U.S., he laid out  all these options of treatment, and then just paused when he was expecting me to jump in. And I just stood there silently, confused.

P.H.: There was a survey of breast cancer patients, which we talk about in the book, where they were asked whether they wanted to make the decision about their treatment themselves, with their doctor, or have the doctor make the choice. Interestingly, not everyone wanted the same thing. Some people wanted to have the primary role in making the decision and others wanted the doctor to do it, and the largest proportion wanted shared decision-making.

But as you point out in the book, in America, we also stigmatize people who don't want to take control of their healthcare.

J.G.: This is not just anecdotal. It was first articulated by Carl Schneider from the University of Michigan, that some patients feel that they're out of sync with the culture because they don't want to take the burden as they see it of making every decision for themselves. And sometimes they feel stigmatized, that they are not empowered or not advocating and so on.

It's a personal process, it's not a fixed process. We wrote about Ms. Brody, a patient who was used to being in control, but when she was faced with so many complicated decisions [about her possible breast cancer], her doctor was completely transparent with her. He said, you know there's a big debate about radiation here, and she ultimately said, I don't have the expertise to make a sound decision but he understands my medical mind, he knows what my goals are. When she was found to have a genetic predisposition for breast cancer, she had to revert back and make decisions with some level of autonomy. It's a dynamic process.

People's perceptions of doctors are often shaped by TV shows like "House," where they're presented as people who can come up with miraculous diagnoses working alone. Given that patients are being given more autonomy in their decision-making, how do you think these kind of pop cultural portrayals affect their perception of the process?

J.G.:  "House" is "Sherlock Holmes," that's what it's modeled on. You have a detective who's a drug addict. It's very entertaining and very popular, but frankly it's not the real world of medicine. A lot of very important diagnoses and decisions are made in group ways in terms of discussing complicated cases in clinical conferences, drawing on colleagues, working as a team. The idea that there's an idiot savant who goes out and finds something isn't accurate.

P.H.: You're trying to get the unusual diagnosis nobody can make, that's a very dramatic and very entertaining, and a really interesting part of medicine. But once you've made the brilliant diagnosis and you've got treatment options to consider, a lot of times there are several, and that's where this all comes into play.

That should be the spinoff show: "House discusses treatment options." In the book, you explain how the way numbers are presented to patients deeply affect the way they think about their treatment options. How is that?

P.H.: In the book we talk about a 45-year-old woman who has high cholesterol and we show how, if you hear about a relative reduction in risk as opposed to an absolute reduction in risk, it has a big impact on your decisions of treatment. So when her doctor talked to her about her statin medication, he presented its benefits as reducing the risk of a heart attack by 30 percent reduction. This made it sound like she was 100 percent at risk if she didn't take it.

J.G.: But what she needed to find out was that the chance of something like that happening was actually only one in a hundred. Ninety-nine out of 100 people over 10 years will have no problem if they don't take statin. So a 30 percent reduction would have a very minimal impact in her personal situation. Just recently I saw an ad for statin that said 80 percent of people who have heart attacks had high cholesterol. That's true. But it sounded like 80 percent of people with high cholesterol will have a heart attack. The numbers are almost always presented like this in ads, so it looks like you're in much greater danger and the benefit of the treatment is much larger than it really is.

When people are diagnosed with an illness they often put a lot of effort into finding the "best" doctor. Why isn't that always the best strategy?

J.G.: Now quality report cards are being published, and some of the stuff on that is absolutely important. You don't want to go to a surgeon who has a very high rate of infections or a hospital that doesn't give the correct treatment for a heart attack. But a lot of these profiles of doctors -- who's best, who's highly ranked, who's not -- don't even agree with each other. Often it depends on the financial interest of the insurer who is backing the study. What's really important is how does the doctor work with you as an individual to customize the treatment. In the book we follow a woman who is an art dealer, and when she gets sick, she goes to the best of the best and the guy is totally dismissive. He wasn't a good fit.

Toward the end of the book you write about advanced directives, like Do Not Resuscitate orders, which some very ill people use to guide their treatment in their final days. Increasingly, studies have shown that they're not ideal. Why?

P.H.: Advanced directives are a starting point. In the book we talk about the woman, Mary Quinn, who had a cancer and at the beginning said, I really don't want any heroic measures, and yet when it came down to it, she changed her mind. That happens a lot, that people don't anticipate that they'll be able to adapt and enjoy their lives in circumstances they've never experienced.

J.G.: If someone is on heavy medication or comatose and family members or friends or partners, whatever, are called upon to try to make substituted judgments, that's very challenging. What does a heroic measure mean in that setting? Trying to understand from the person's past choices whether they're a maximalist, minimalist, believer or a doubter, it will help direct you in a way that you can make a judgment which hopefully was in their best interest.

How have your experiences as patients changed the way your practice medicine?

P.H.: I'm a doubter, so I'm basically worried about every treatment. Jerome is a maximalist, which is the opposite point of view. That person is ready to barrel right through treatment without thinking about the downside.

When we present treatment options to patients, we're very careful not to impose or project our biases on the patient. We try very carefully to elicit the patients' own sentiments, so they can make the decisions that are right for them. We also try to acknowledge where the patients are coming from, so when we start giving our discussion of treatment options we understand how they're likely to react.