While Republicans seize upon a solar power fiasco to attack green energy, the Chinese get even more ambitious 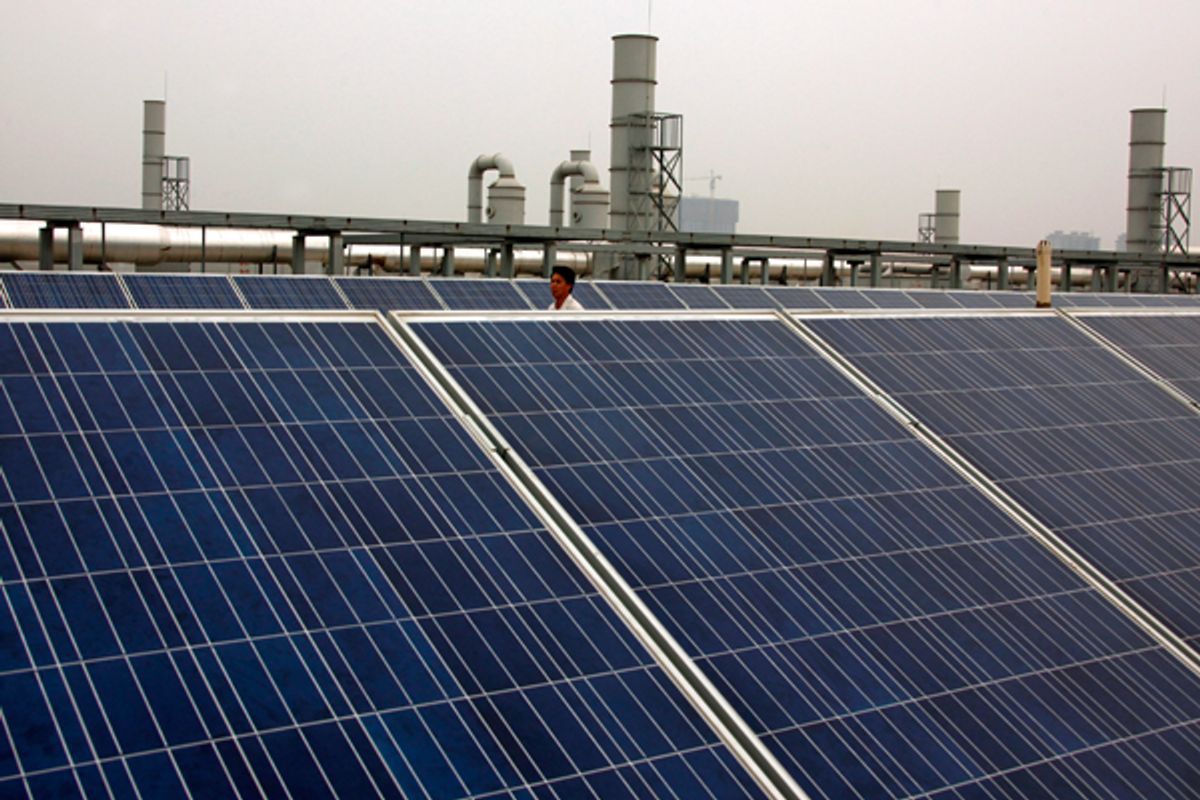 A worker walks behind solar panels on the factory roof of the Yingli Green Energy Holding Company in Baoding, Hebei Province. (Reuters/David Gray)
--

When faced with a panel of out-for-blood House Republicans, keeping mum is probably a prudent idea. But the sight of Solyndra's corporate executives pleading the fifth amendment at Friday morning's Congressional hearing certainly didn't inspire confidence. Whatever one thinks of the merits of industrial policy targeted at green energy, Solyndra's failure is a grade A debacle. While the New York Times reports today that there is no evidence yet of direct political favoritism, it probably wasn't a good idea for Solyndra executives to be telling Congress that the company was doing fine just five weeks before declaring bankruptcy.

The Times makes a convincing argument that the White House misjudged the state of the world solar power market in its eager push to get Solyndra's loan guarantee guaranteed. Thas a shame -- in a perfect world, we would all wish for a government that never made a bad investment, and never backed a loser. But the hypocrisy of Republicans on this issue is absurd. The economics of nuclear power are so dicey that private insurers refused to offer policies on nuclear power plants until Congress passed a law limiting nuclear power utility liability and putting the taxpayer on the hook for the costs of a meltdown. But Republicans love loan guarantees for nuclear power plants.

The broader context around the Solyndra decision is that the nation was on the brink of a depression and the Obama administration was attempting to move as quickly as possible to pump money into the economy that would not only stimulate economic growth, but also serve the larger agendas of creating green jobs and combat the challenge of climate change. If mistakes get made in the pursuit of that agenda, can't reasonable people accept them as the cost of doing business?

But there's an even larger context. China will shortly roll out its 12th five-year-plan for renewable energy deployment. The details of China's plan, as reported by Melanie Hart at Think Progress, are nothing short of staggering.

According to the latest leaks in the Chinese media, the new renewable energy plan will raise solar targets to unprecedented levels: 10 GW of installed solar capacity by 2015, including 9 GW from photovoltaic installations and 1 GW from solar thermal electric power generation, and 50 GW total installed capacity by 2020.

The United States is currently ahead of China, with 2.6 GW installed solar capacity at year-end 2010. The United States is also leading in solar equipment, with $1.9 billion in overall net exports in 2010, and a $247 million trade surplus with China.

For China, these new targets are truly big. As of year-end 2010, China had around 700 megawatts of installed solar capacity, so meeting the new 2015 target will require adding another 9.3 GW to the grid -- a capacity expansion of over 1,000 percent during the 2011-2015 five-year plan period.

Will China's government occasionally subsidize the wrong solar power technology in pursuit of these goals? Assuredly so! Will corruption steer government dollars into private hands? Without question! Will China end up dominating a crucial technology of the 21st century that possibly points a way out from global fossil fuel dependence. Well, I can't say yes for certain, but I can guess that the probability of China getting there is lot more likely than it is for the United States. Earlier this week, I reported that in March, former Michigan governor Jennifer Granholm met a Chinese official who was positively gleeful at U.S. failure to pursue an aggressive national energy policy. No wonder!

I would never want to be a citizen of a one-party dominated repressive state like China, but the U.S. is now so far at the other end of the spectrum of government efficacy that is downright embarrassing. As I write these words, Republicans and Democrats are at loggerheads -- with another government shutdown possibly looming -- because Republicans want to offset the cost of disaster relief by cutting funding for green energy initiatives. It is a position that manages to simultaneously be transparently political and incredibly dumb. And it's business as usual for the U.S. Congress.