Are comedians funnier when they're fat?

Can a comic actor lose weight without losing laughs? On Twitter, Jonah Hill's fans aren't so sure 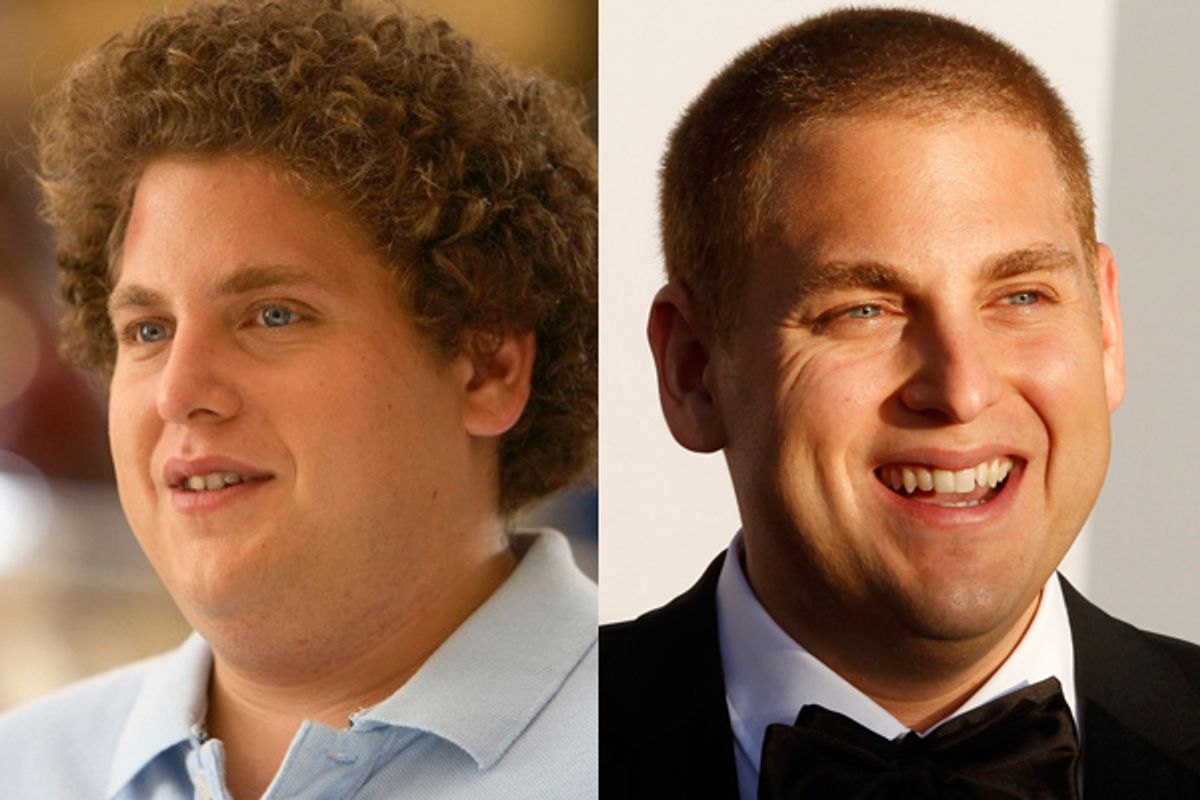 When Jonah Hill appeared on "Live With Regis and Kelly" earlier this week, he probably thought he was there to promote his role in the new film "Moneyball." As it turned out, what they really wanted to talk about was how good Hill looked in his skinny jeans.

In case you haven’t seen him looking svelte on the couches of Letterman, Fallon and Conan, Jonah Hill isn’t fat anymore. He’s trim, stylish -- and almost completely unrecognizable from the portly schlub that audiences fell in love with in films like "Superbad."

"I decided I wanted to be healthier, and I stuck with that decision," Hill told Regis and Kelly, in a variation on the same talking points he's used in interviews all week. Hill said he knew it was time to make some changes when his nutritionist "had me write down what my favorite foods were, and it was like, the menu of a 6-year-old’s birthday party."

Certainly, this weight loss is good for Hill’s health, his self-esteem and the number of "Zoolander"-esque outfits he’s now able to pull off. But it’s killing him on Twitter.

The Twitterverse is already aflutter with comments questioning whether the new slimmed-down Hill will be as funny as the earlier, super-size version. Tom Arnold knows how even comics can be stung by the wisecracks.

"It’s the same mistake people make about when [comedians] quit drugs," says Arnold, who fights to stay slim after many years of weight issues. "They think that when people lose weight, they won’t be funny."

From Jackie Gleason to John Candy, from John Belushi to Kevin James, Falstaffian funnymen have long used their heft as a major part of their comedy arsenal (i.e., Chris Farley’s Chippendales routine on "Saturday Night Live").

"I think it’s a combination of girth and boisterousness that creates the funny fat person," suggests Glenn Kenny, a former editor at Premiere magazine, now the lead critic for MSN Movies and writer of the film blog Some Came Running. "Excess is considered funny, and the essential gluttony of a character like Falstaff is considered humorous. It’s a token of being larger than life."

With fatness and funniness so closely linked in the public perception, audiences may feel that when a chubby comedian sheds weight, there’s just less of him to love.

"You probably all notice that I’m around 10 pounds less funny," said Hill’s friend Seth Rogen after undergoing a similar physical transformation. Rogen, who has said that he wouldn’t have lost the weight if he’d known how much attention would have been made of it, felt some members of his fan base were actually disappointed in him when he slimmed down: "I think for chubby guys, I was their guy," he told interviewers. "They were like, 'I can be chubby -- Seth Rogen’s chubby, so who cares.' But now I’m not so chubby anymore ... I’ve let them down." Interestingly, Rogen has gained back much of the weight he’d lost a couple of years ago.

Some people associate keeping the flab with keeping it real: "There are people who think losing weight is selling out," says Arnold. "And those are usually other fat people."

For an overweight actor, heft can be an important part of their professional identity. "In Hollywood, there’s usually one fat guy at each agency," says Arnold. "If John Goodman’s at an agency, it’s probably not a good place for me, because they are going to send him out first." (Perhaps a slot will be opening up, now that Goodman has lost 100 pounds.)

Arnold, who can be seen these days on FX’s "Sons of Anarchy," remembers preparing for his role in Don Roos’ film "Happy Endings," in which he played Maggie Gyllenhaal’s love interest. "I wanted to lose weight because I knew there was a scene with my shirt off," Arnold explains, but "the director thought it would add more pathos if I did not lose weight, and would make people feel more sorry for [Gyllenhaal’s character]. But when I did lose weight after that, Don was very happy for me as a human being."

Of course, there’s a double standard when it comes to women. Melissa McCarthy’s recent Emmy win notwithstanding, thinness is almost always a prerequisite for female performers, and ladies who shed pounds invariably help their careers -- see Valerie Bertinelli’s journey from D-list obscurity to "Hot in Cleveland" hotness. But their male counterparts can find themselves in a bit of a career conundrum.

"I can’t play the little, funny, fat guy anymore," Ricky Gervais said after losing 20 pounds. "I might have to get myself a fat suit." With his new V-shaped torso and flab-free frame, it’s hard to think of Gervais as an underdog anymore, and as such, his wickedly funny humor can seem, well, just plain wicked. When Gervais slammed Tim Allen while introducing him and Tom Hanks at this year’s Golden Globes, Hanks responded: "Like many of you, we recall back when Ricky Gervais was a slightly chubby but very kind comedian." "Neither of which," Allen added, "is he now."

Indeed, Jonah Hill may find that his new image in Hollywood doesn’t fit as well as those skinny jeans: "Hill has emerged as kind of half-buff, neither a fully-fledged slob, or, as is technically known, a hottie," wrote the U.K. paper the Observer. "In Hollywood, isn’t this tantamount to career suicide?"

Kenny doesn't think so. "Jonah Hill has got a lot of things going for him," he says. "He’s young, and he’s really talented, and now that he’s slimmer he’ll have a longer life and a longer career." Kenny argues that audiences will "look at a guy like Jonah Hill, and they’ll think, 'You know what, he was funny when he was fat, but good for him. And now I can watch him and enjoy it more -- because I don’t have to worry about him.’ "

Tom Arnold recalls being worried about his friend Chris Farley’s weight and drug use. "We were very close," he says, "and I remember telling him at one point, 'Listen, you’ve gotta make a decision. You can either be a drug addict, or fat, but you can’t be both. That’s what killed him, was being both."

Arnold believes that fatness can actually hinder an actor’s ability to perform. "I have been very big -- I have been over 300 pounds, I’ve been under 200 pounds, and I certainly wasn’t at my funniest when I was over 300 pounds.” He remembers from his days working on his ex-wife’s TV show, "Roseanne," "watching John [Goodman] on a daily basis, that when he got really big, it was a struggle for him then. I could see him panting and struggling, and it made it harder. He wasn’t as funny, he wasn’t as good. And it’s the same thing with myself."

When Hill recently appeared on the MTV Video Music Awards, he poked fun at the flak he’s been getting for losing weight. He suggested to musician Nicki Minaj that perhaps the true answer to the timeless question of why did the chicken cross the road was this: "He did it for fitness." When Minaj replied that that wasn’t a particularly funny response, Hill went on: "It’s not funny that the chicken wanted to change his lifestyle a little bit, become a little healthier? Is it funny that instead of getting a pat on the back, the chicken gets a bunch of jerks tweeting that he’s not funny anymore? Maybe the chicken should just drop dead at 40, so you can laugh a little bit, huh? He’s just healthier," Hill cried, exasperated. "But he’s the same chicken!"

"People who really are Jonah Hill fans should be very relieved," says Arnold. "Because he was getting dangerously fat. And to me that makes it less funny, when you’re worried about someone’s health ... I heard him on the radio the other day. And he’s just as funny as ever."

As for Arnold, staying fit is a top priority: "I’m working hard at it. I have to." As he gets older, he says, being out of shape "is not so funny anymore."