Why hold up the security line waiting for a TSA screener to amble over to have a look? There must be a better way 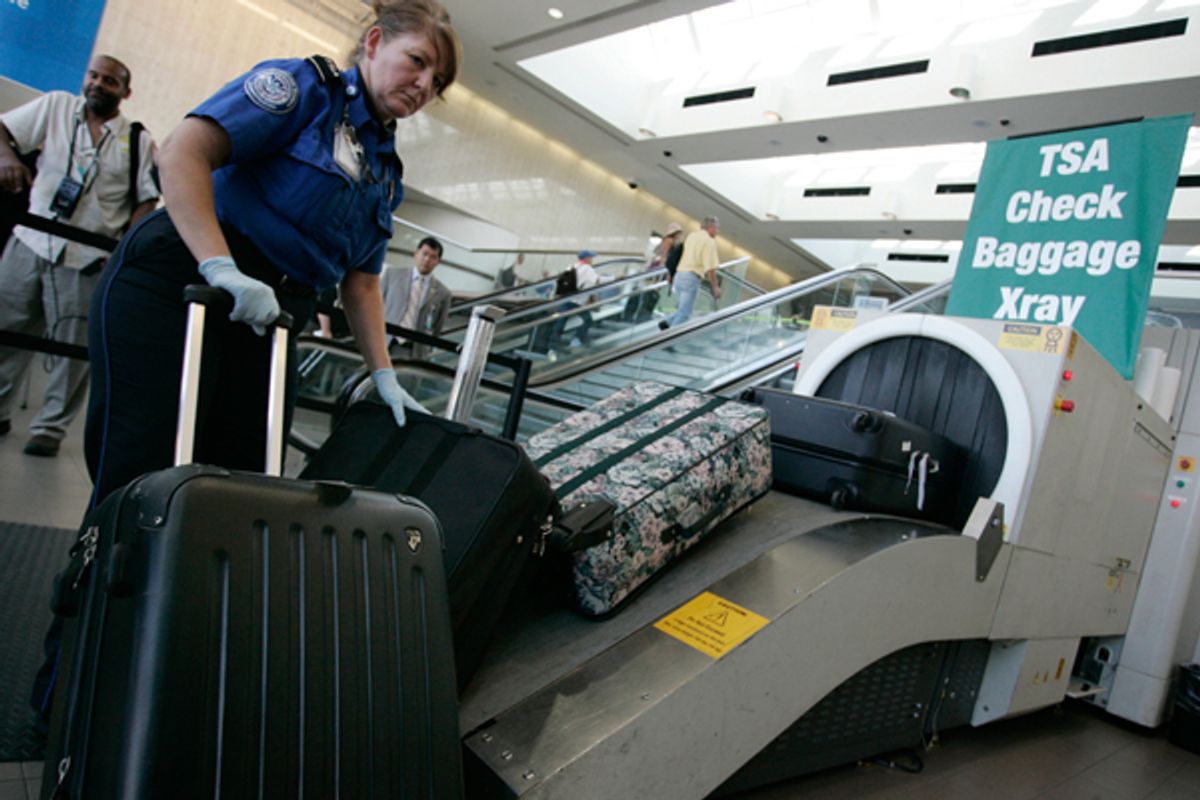 Two of the most frightening words in air travel, those are.

You know what I'm talking about: The Transportation Security Administration checkpoint line is crawling along at its usual slug's place, when all of a sudden it groans to a total stop.

Up ahead, at the luggage scanner, a guard has spied something unusual on the monitor. He switches off the belt and calls for a colleague. And for the next several minutes, nothing happens.

The seconds tick by as the guard waits for his colleague. One minute passes. Then two. Then three. All the while, the line behind you grows longer.

Eventually a supervisor ambles over. There's a conference. For some reason these situations require a sort of football huddle, with lots of whispering and pointing, before finally things get moving again. At last the bag is either sent on its way, or removed for a closer, hands-on inspection.

The obvious question: Is there a reason the offending piece of luggage can't simply be pulled from the machine and screened separately -- on a table behind or to one side of the main platform? The screener could archive the scan if need be, and the belt and the line could keep moving.

Let's say the average "bag check" takes 90 seconds to resolve, and there is one every 12 minutes. (In my own experience they seem to happen more frequently, but let's be conservative.) That's a minimum of seven and a half minutes of non-movement per hour, per security line. Keep doing the math, and you'll come up with some preposterous amount of collective wasted time.

The other night I endured a particularly lengthy bag check. The luggage in question was mine. I was on duty, in my uniform, which made things embarrassing enough in the first place. But when I asked for answers, it only got worse.

"BAG CHECK!" called the woman at the monitor, switching off the belt. She then proceeded to sit there, doing absolutely nothing, for the next five minutes.

"I think that's mine," I said, my black roll-aboard now captive in the metal cave only a few feet away. "What is it you're looking at?"

A head shake was her only response.

"How come," I asked, "when this happens, can't you just pull out the bag and hold it aside, so that the line doesn't have to stop?"

"Because these are the rules."

"OK. But wouldn't it be better to keep things moving? The bag wouldn't be going anywhere, and neither would I ..."

Louder voice this time, her eyes widening: "These are the rules! Do not argue, sir!"

Right, great discussion there. Thanks for the explanation.

Another concourse screener I spoke with says this protocol varies location to location. "It doesn't happen that way at my airport," he told me. "I can remove a bag, then review the archived scan with another officer."

I'll take his word for it, though I can't recall seeing this at any of the airports I frequently pass through.

I've also been told that TSA supervisors occasionally establish their own "local" rules as to how bag checks are handled. This is not official policy, but it's known to happen. Or it might be that a particular airport has had a history of breaches and is trying to run an extra-tight ship.

Well, all right, but that still doesn't explain why the line has to stop.

"TSA's priority is to provide the best possible security in the most efficient way," said a TSA official. There is a valid reason a bag can't be moved and put aside, the official assured me, but was unable to divulge further particulars.

Such assurances notwithstanding, I fail to see how moving a bag 5 feet to one side would have any effect on the thoroughness of the screening itself. What am I missing?

In the big picture, no, an extra few minutes' wait is not an unreasonable price to pay if it helps reduce the likelihood of a bomb being smuggled onto a plane. But neither is it necessary, and in that same big picture we're talking about millions of wasted minutes.

Then again, 10 long years after the TSA was created, much about the average checkpoint still has a juryrigged feel: the tottering piles of bins, the X-ray belts that are twice as high as they need to be, the bottleneck collection points, etc. Thorough the checkpoints might be, but are they really efficient?

As I've advocated many times in this column, the ideal course of action would be an overhaul of our entire approach to concourse security, shifting to a focus on passengers themselves rather than on their belongings. TSA, in fact, concurs, and rumblings are that it will tailor its approach accordingly over time. And the agency, I'm obliged to concede, isn't quite the dysfunctional demon some of us -- ahem -- routinely make it out to be. I have spoken to plenty of bright, resourceful people at TSA who know a lot more about the challenges of safeguarding an airport than I ever will.

But, for the time being, assuming we're stuck with the self-defeating strategy that treats every last person who flies, from crew member to infant, as an equal threat, and insists on marching those people through an overly tedious screening process, can we at least rejigger the hardware and employ some common sense? A few simple tweaks would go a long way toward a smoother, faster, less frustrating experience.