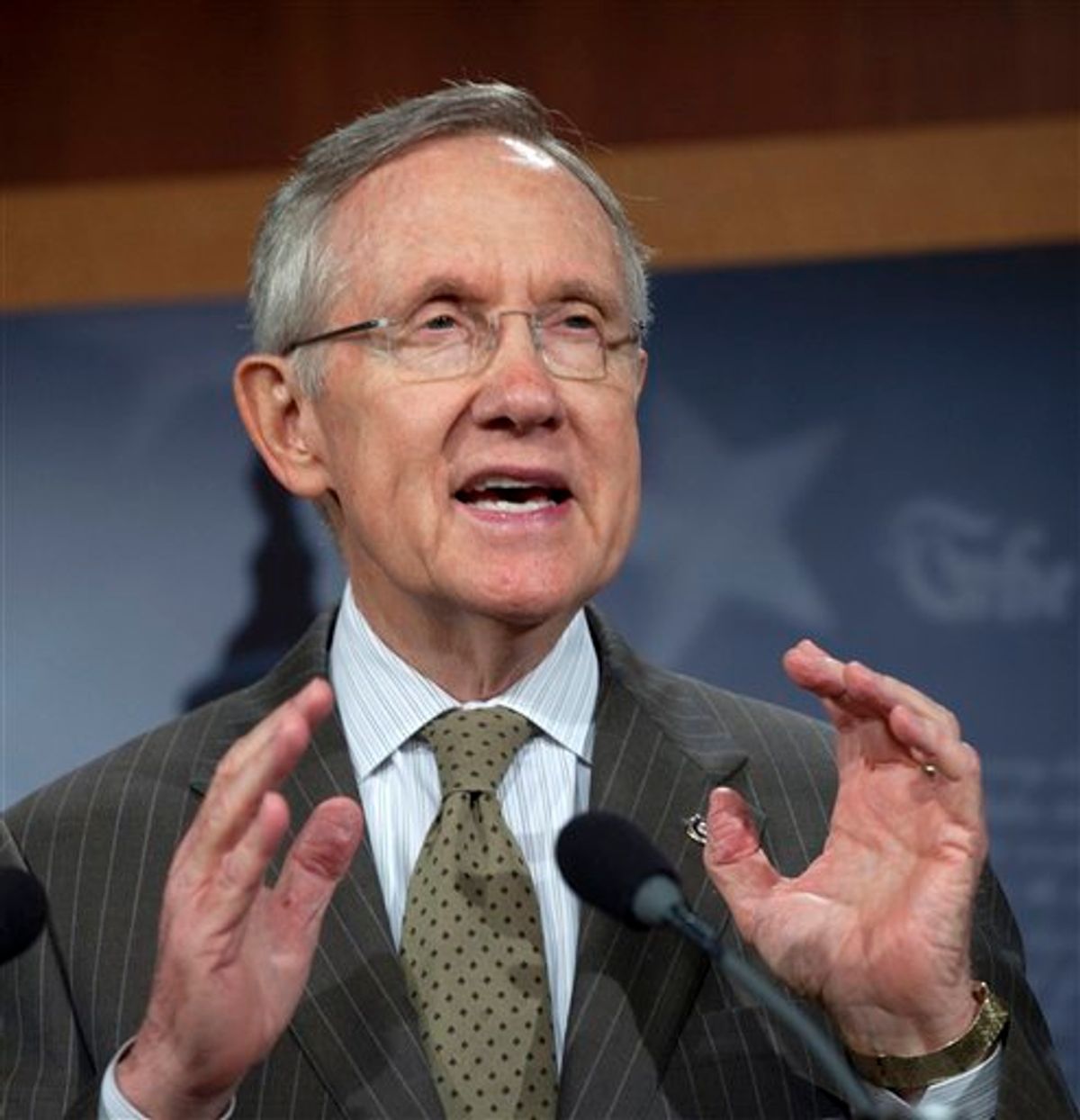 Senate Majority Leader Harry Reid of Nev. gestures during a news conference on Capitol Hill in Washington on Thursday, Sept. 22, 2011, to discuss FEMA funding and the Continuing Resolution to fund the government. (AP Photo/Harry Hamburg) (AP)
--

With the economy sputtering, the warring factions of Congress have lurched toward gridlock over the usually noncontroversial process of approving disaster aid and keeping the government from shutting down.

The GOP-dominated House early Friday muscled through a $3.7 billion disaster aid measure along with a stopgap spending bill to keep the government running past next Friday. The narrow 219-203 tally reversed an embarrassing loss for House GOP leaders that came Wednesday at the hands of rebellious tea party Republicans.

Even before the House vote, however, the leader of the Senate promised that majority Democrats will scuttle the measure as soon as it reaches the chamber on Friday. Democrats there want a much larger infusion of disaster aid and they're angry over cuts totaling $1.6 trillion from clean energy programs -- and the strong-arm tactics being tried by the House.

Senate Majority Leader Harry Reid, D-Nev., said the House plan "is not an honest effort at compromise. ... It will be rejected by the Senate."

The combination of events promises to push the partisan war into the weekend and could increase the chances that the government's main disaster aid account at the Federal Emergency Management Agency might run dry early next week.

More broadly, the renewed partisanship over what should be routine moves to help disaster victims and prevent a government shutdown sends a discouraging sign as a bitterly divided Washington looks ahead to more significant debates on President Barack Obama's jobs plan and efforts by a congressional supercommittee to slash deficits.

Thursday's maneuvering started as Republicans controlling the House moved to resurrect the disaster aid package after an embarrassing loss on Wednesday.

Instead of reaching out to Democrats, House GOP leaders looked to persuade wayward tea party Republicans to change their votes and help approve the assistance -- and try to force Senate Democrats into a corner with little choice but to accept cuts to clean energy programs they favor. One sweetener for conservatives was to add $100 million in savings from a program that financed a federal loan to the now-bankrupt solar panel maker Solyndra Inc.

Republicans had hoped that once the House passed the measure, Senate Democrats would have had little choice but to accept it, especially with lawmakers eager to escape Washington for a weeklong recess. The move instead infuriated Democrats, who felt GOP leaders were trying to "jam" them into accepting the GOP bill.

"We're fed up with this," said Sen. Dick Durbin of Illinois, the Democratic Whip. "They know what it takes for us to extend (stopgap funding) and keep the government in business. And this brinksmanship ... we're sick of it."

Unless Congress acts by midnight next Friday, much of the government will shut down. More immediate is the threat that the government's main disaster aid account will run out of money early next week.

"The Senate should pass this bill immediately, and the president should sign it, because any political games will delay FEMA money that suffering American families desperately need," said Michael Steel, spokesman for House Speaker John Boehner, R-Ohio.

The battling came as the stock market absorbed heavy losses and pessimism about the economy deepened. The arguing was reminiscent of the poisonous atmosphere of this summer rather than lawmakers' more recent promises to work together to find common ground where possible.

Wednesday's embarrassing 230-195 defeat of the disaster aid bill in the GOP-majority House exposed divisions within the Republican Party that demonstrated the tenuous grip that Boehner has on the chamber. Forty-eight Republicans opposed the measure then, chiefly because it would permit spending at the rate approved in last month's debt pact between Boehner and Obama, a level that is unpopular with tea party lawmakers.

GOP leaders maneuvered to win a vote on the largely identical measure by arguing to their party members that the alternative was to give Democrats a better deal by adding more disaster aid or decoupling it from $1.5 billion in spending cuts.

"What we voted on yesterday was the best deal Republicans could get and it can only go downhill from here," said Rep. Peter King, R-N.Y. "So we should try to re-vote again on the same bill we had yesterday, vote on it again, pass it this time, or if not we'll have to make concessions that would help the Democrats."

GOP leaders cut those defections in half, to 24, on Friday morning's tally. Six Democrats from disaster-hit districts voted for the measure.

The vast majority of Democrats opposed the legislation over $1.5 billion in accompanying spending cuts from an Energy Department loan program for help in producing fuel-efficient vehicles.

To those cuts, House leaders added another $100 million in savings from a loan guarantee program for renewable energy projects approved under the 2009 stimulus law. Congress set aside $2.4 billion in case some of the loans went bad, such as a $500 million-plus loan to now-bankrupt Solyndra Inc., a California-based solar panel maker effusively praised by Obama.

Homeland Security Secretary Janet Napolitano said Thursday that the government's main disaster aid account is "running on fumes" and could be tapped out as early as early next week. She called on Congress to quickly resolve the problem or risk delays in getting disaster projects approved.

"We have stretched this as far as it can go," Napolitano told The Associated Press as she flew to Joplin, Mo., to view tornado damage. "We are scraping the bottom of the barrel."

As of Thursday morning, there was just $212 million in the FEMA's disaster relief fund. The House measure contains $3.7 billion in disaster aid, mostly for the FEMA fund. A rival Senate measure muscled through that chamber last week by Reid -- with the help of 10 Republicans -- would provide $6.9 billion.

The drama and battling over disaster aid and stopgap spending is unusual. Such measures usually pass routinely since the alternative is shutting down much of the government and denying help to victims of floods, hurricanes and other disasters.

What is more, the House GOP plan won bipartisan support in June when it passed as part of a broader homeland security spending bill. And the $3.7 billion in House aid would provide sufficient help while lawmakers work out a broader spending bill for the 2012 budget year beginning Oct. 1.

Senate Democrats are instead insisting on fully funding most disaster aid programs as part of the stopgap measure, an unusual move.

The current imbroglio illustrates the difficulty lawmakers are sure to have when trying to address tougher problems. The toughest task confronts the so-called supercommittee, which is supposed to come up with at least $1.2 trillion in deficit savings over the coming decade to implement the August budget and debt pact.

The panel had its third public meeting Thursday, again exposing differences between Republicans and Democrats on taxes. The panel has until Thanksgiving to produce legislation -- and there's no sign yet of much progress toward agreement.

Before Thursday night's eruption, the Senate had had an unusually productive week. For example, it voted Thursday to help American workers who fall victim to foreign competition. The move to renew expired portions of the Trade Adjustment Assistance program, which provides retraining and financial support for workers adversely affected by trade, sets the stage for Obama to submit trade agreements with South Korea, Colombia and Panama.