Are these the next stars of American fiction?

The arts are filled with brothers. The hot writers Ben and Jen Percy might be the next hot brother-sister act 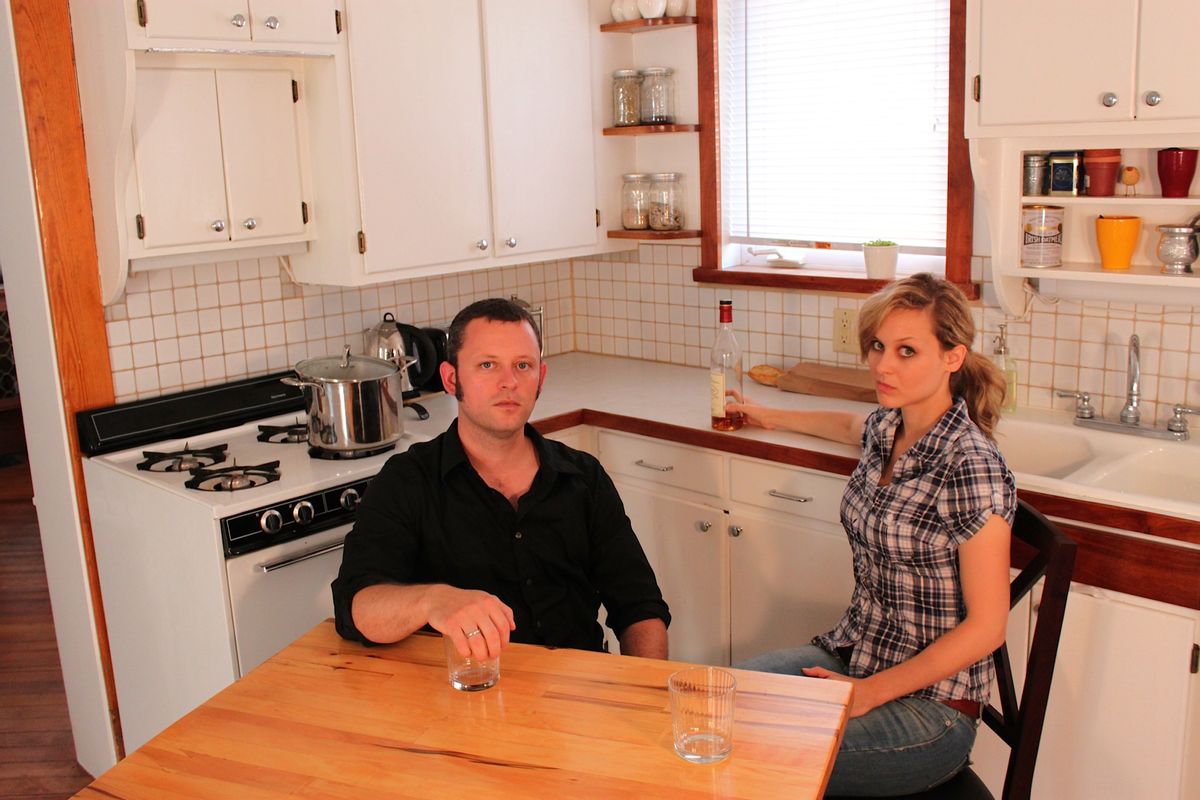 One hundred percent of the bats in Iowa have rabies. Or so claimed the nurse at Iowa City's Mercy Hospital.

"If you wake up and the bat is in the room," she said, echoing the words of the Centers for Disease Control's Advisory Committee on Immunization Practices, "you've got to get in here, immediately. There's no way to tell for certain if you've been bit."

But the writer Jen Percy wasn't so sure. Admittedly, she'd awakened to a fluttering of wings in the darkness -- to a small furry body landing on her neck at 4 a.m. And sure -- she'd screamed and turned on the light and found the creature, bewildered and shaking and brown, huddled on top of the covers at the foot of her bed. Yes, the house was overrun with bats; just the day before she'd discovered one in her half-eaten bowl of Cocoa Puffs (bats like Cocoa Puffs?).  To make matters worse, there was that whole business with the exorcism at the Bear Creek Ranch in rural Georgia, the exorcism that she'd described for "Demon Camp," her forthcoming, book-length work of creative-nonfiction from Scribner. In that particular exorcism, a woman who called herself "The Son of Jesus" had said that Jen was being followed -- day and night -- by a demon in the shape of a bat. So, if anyone should worry about contracting rabies from a flying mammal in the order Chiroptera, it might be Jen Percy.

And yet. It was her inaugural week as a Truman Capote Fellow at the Iowa Writers' Workshop. In a matter of hours, Z.Z. Packer, one of the New Yorker's "20 under 40," would be critiquing Jen's first short story. For the past five days, Jen had been battling the stomach flu and now, well, rabies just didn't fit into the picture. Jen resolved to do nothing. She'd spent the last three years, after all, interviewing badly traumatized Iraq veterans for "Demon Camp" -- attending their exorcisms at a rural evangelical Christian ranch whose founders employed "spiritual warfare" to combat 21st century battlefield post-traumatic stress disorder. How much havoc could a four-ounce creature with webbed forelimbs create?

If this were a short story by Clive Barker or Stephen King, things would end badly. Certainly, the bat would be rabid. Perhaps it would be infected with a new kind of wildly contagious rabies -- one that would then spread, over the course of 800 pages, throughout America's Beleaguered Heartland. And PATIENT ZERO, JEN PERCY, would be immortalized in the literature of the apocalypse: "If only she'd have gone to Mercy Hospital for antibiotics and a series of rabies shots," the survivors would say, "then maybe civilization could have been saved."

Fortunately (for the editor in all of us), life is not that short story. And so on the morning of the bat attack, Jen wrote to her brother, the writer Ben Percy -- who's also in Iowa City this fall, teaching a class at the renowned Iowa Writers' Workshop. As older brothers often do, Ben offered his sage and calming advice. "Mom is going to freak," he said. "A bat? You need to get tested ASAP. A girl in Milwaukee got rabies and ended up in a wheelchair with brain damage. Seriously. The sooner you're tested, the better your chances, if positive. Go NOW." Though he didn't sign it Love, Ben, the sentiment was all but implied.

Contemporary American literature has a number of well-known brothers: Richard and Robert Bausch, Tobias and Geoffrey Wolff, Michael and Matthew Dickman. Hollywood also seems to have a fascination with brothers -- be they Coens, Wachowskis, Farrellys or Wayanses. But there are fewer brother-and-sister duos, and certainly none whose writing has achieved such notice in such a short time -- or is so very marked by the Gothic. The buzz in publishing circles around "Demon Camp" is perhaps only equaled by the buzz around Ben's second novel, "Red Moon" -- which sold to Grand Central/Hachette in 2010 for $500,000.

"I feel a little like a hybrid writer," says Ben, whose books include "The Wilding" and two acclaimed short-story collections. (He's been published in Best American Short Stories, won the $50,000 Whiting Writers' Award and been extravagantly praised by writers as different as Peter Straub and Ann Patchett.

"And even that's not the right term. 'Red Moon' is a book with a seventh-century Scandinavian werewolf myth in it -- but still -- I want the sentences to be beautiful. Look. It doesn't matter if there's a ghost, or a robot, or a detective in the book, the question that should still preoccupy you is: Are the sentences worthy of hanging on the wall, one by one by one?"

Talk with either Ben or Jen Percy for any length of time and the thing that will impress you is this: They both have an intense -- almost vicious -- love of writing. They care deeply. They are actually hanging those sentences on their walls, one by one by one. And they will talk almost interchangeably about art, about writing and reading and growing up in Oregon's high desert country. Family psychologists will tell you about deidentification, the process whereby siblings purposely pursue different career trajectories in order to differentiate from each other. This is not the story of the Percy siblings.

"We both wanted to be scientists," Ben admits. "I wanted to do archaeology. My first job was an excavation of a Paiute village in the Christmas Valley region. That wobbled a bit, but then I went to Brown to study anthropology."

"And I was a physics major," Jen says. "Before I took a single creative writing class -- I got a summer grant from MRSEC, the Materials Research Science and Engineering Center at UMass Amherst, to work with their mass spectrometer."

And yet writing snared both siblings -- almost as if they were meant to do nothing else. What to make of this fact: A brother and sister, both setting out on similar career paths, but both diverted to the same, difficult, complicated, frustrating, esoteric art?

Writing about childhood can be luminous, and since Ben and Jen Percy shared a childhood, their work in this arena is a fascinating glimpse into style, voice and character.

I grew up on 10 acres of woods. One afternoon when I was 11, there rose a terrible screaming from them, as slow as smoke. I went to my window and opened it and stared off into the forest. A minute of silence passed and then the screaming began again. It was the worst sound I had ever heard; I was reminded of the banshee stories my grandfather liked to tell me, so that when the door to the bedroom clattered open, I jumped. It was my father. He was holding a rifle, a 30.06. He told me to follow him, and I did as he told me. We followed one of the many game trails that snaked past logs furred over with moss, past hemlocks and cedars and firs, and all the while the screaming continued, a woman's wail, until we came to the fence that edged our property. In it hung a deer, a six-point buck, tangled up in the barbed wire. It thrashed at our slow approach and loosed another wretched wail and then went still for a moment with its tongue hanging from its mouth. Its hide was the color of cinnamon where it wasn't oozing with blood. My father laid a hand on my shoulder. It was heavy enough to make my shoulder drop a little. He looked at me seriously and said I should kill the deer, as if killing were driving a stick-shift or installing a light fixture, something I ought to learn how to do.

Sometimes my father would drive out to Fossil to go deer hunting. My father always came home in the evening, wearing neon orange, pine sap still soft in his beard, a few leaves stuck to his shoulder, sometimes dragging a four-prong buck behind him like a bag of laundry, his face looking like whatever it was he killed. I remember my father telling me that there are two ways to hang a deer: from its neck or from its legs. He preferred the neck.

I watched from inside our kitchen -- windows open, screens shut -- as my father worked the knife through a tough spot on the deer's stomach. It hung from an old juniper tree, its neck twisted ninety degrees, spinning like a Christmas tree ornament. My father made an incision and peeled the skin off leisurely and with care, the way he might take off a woman's jacket at a party. It made a sound. He turned, he explained: the sooner you skin the deer after it dies the easier the hide slides off. The deer was naked, purple and soft, like the deepest part of a peach.

Where is a writer's voice formed? Is it in the crucible of childhood experience? Wide-eyed and standing before the slaughtered animal -- is this where the writer first becomes self-aware? Does this moment imprint upon the psyche and remain, beneath the others, a foundation that cannot be destroyed?

In his 1907 essay, "Creative Writers and Day-Dreaming," Sigmund Freud explores a number of themes -- among them, the role of childhood experience on the work of the writer:

The creative writer does the same thing as the child at play. He creates a world of fantasy that he takes very seriously -- that is, which he invests with large amounts of emotion -- while separating it sharply from reality.

A mimicry of childhood play -- this is the deeper truth, perhaps, about the process of writing. The investiture of emotion into the imagination. An unreal world looked at with great scrutiny, taken very seriously. This sounds, perhaps, like the most fundamental underpinning of the writing workshop.

In 2012, both "Demon Camp" and "Red Moon" will be added to the shelves of the Frank Conroy Reading Room at the writers' workshop, inserted after John Irving and Flannery O'Connor -- but before Philip Roth and Kurt Vonnegut. There in the Dey House, these two texts will assume their places in the colorful phalanx -- the variegated battlement -- that is the University of Iowa Writers' Workshop alumni library. These two works are quite different but also somehow similar -- strung through with the bond of familial love and perhaps, just perhaps, the memories of a bat attack and a butchered deer.

Pauls Toutonghi's second novel, "Evel Knievel Days," will be published in July 2012 by Crown, a division of Random House. He lives in Portland, Ore., where he teaches at Lewis and Clark College.

Pauls Toutonghi’s second novel, “Evel Knievel Days,” was published in July 2012 by Crown, a division of Random House. He lives in Portland, Ore., where he's an Associate Professor of Creative Writing at Lewis and Clark College.