Recognition for a visionary designer

A former NYT art director talks about his gig at a sex rag, his recent award and his design advice for the Obamas 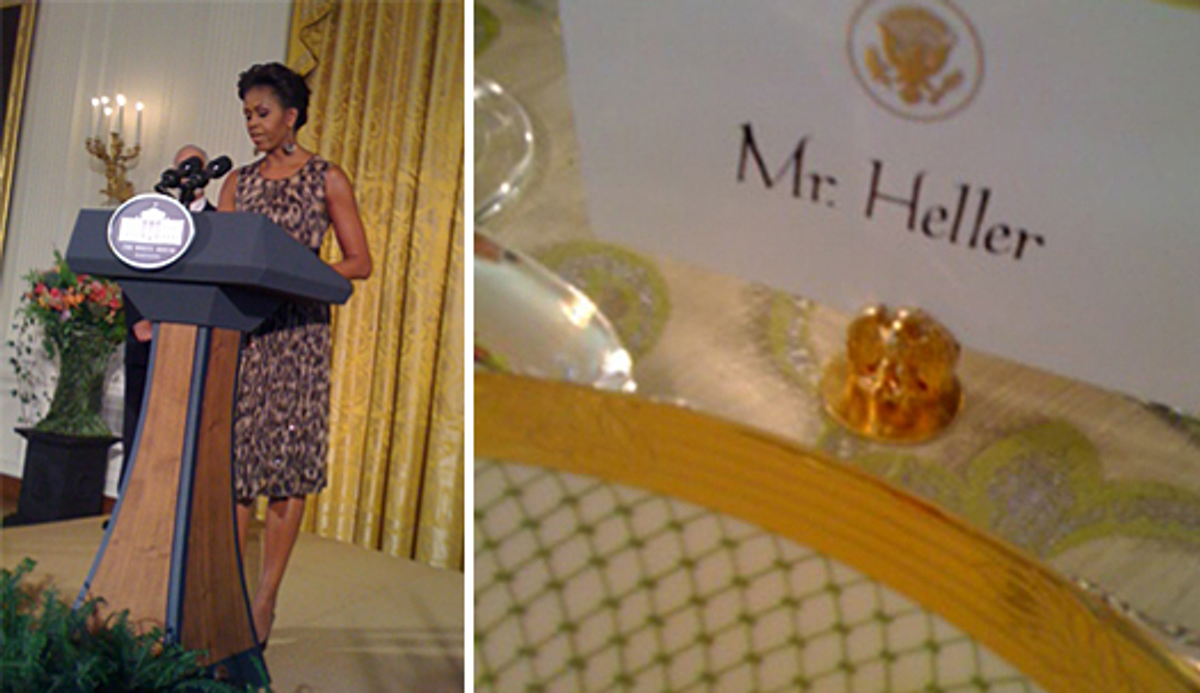 Recently, Steven Heller, one of our longest-running and most beloved contributors -- certainly our most prolific -- traveled to the White House to accept the Design Mind Award from the Cooper-Hewitt, National Design Museum. The award "recognizes a visionary who has effected a paradigm shift in design thinking or practice through writing, research, and scholarship." It couldn't be more deserved: Steve has an outsize responsibility for the inroads graphic design has made in the popular imagination, from his 33 years as art director at the New York Times to his tireless work chronicling design history. To mark his achievement, I asked Steve about his work ethic, what he learned from art directing a porn magazine, and his advice for the Obama administration.

When Paula Scher wrote your bio for your 1999 AIGA Medal, she joked that "it is probably one of the very few that is not written by Steven Heller." But your productivity is legendary. Apart from your work at Print, you write frequently for the New York Times, the Atlantic, Eye and many other publications. You teach at the School of Visual Arts and co-chair its MFA Designer as Author program . Oh, and you've authored or edited 130-plus books. How do you maintain that kind of output?

Performance-enhancing meditation. But seriously, folks, I just love working (although I also love not working). I am compelled to continually prove something to myself. We are all a product of some genetic and/or psychological power source. But in the end, I have an insatiable appetite. And it gets fed by writing and research. There once was a time when I couldn't stop designing.

Your books cover an enormous range of subjects. Are there any common threads or interests that tie them all together?

Well, my "official" bio says my work is about illustration, satiric art, design and popular culture. I think the glue is that I wanted to be a historian, but since I never finished college, I never studied the academic procedures. What's more, the areas that I would have studied were all taken by great names. So, I found design and popular culture, which at the time was the road least traveled.

Design may be your subject, but never exclusively so.

Look around. It's almost entirely impossible to write just about a typeface. It has to be seen in a larger context. Type can be very political, which of course leads to discussing a whole range of issues. Design is a lens, a frame, a window. There is nothing that is not somehow connected to design. Remember, design is totally everywhere.

As far as I know, you've never been enrolled in college, let alone graduate school -- this despite co-founding a graduate program at SVA.

Not exactly true. I was at NYU for two years before leaving. Then at SVA for a semester before being asked to leave. So I can honestly say I've had some college education. I've also co-founded five graduate programs and co-chair one. Thank heavens for SVA. I've been very lucky. For 33 years the New York Times didn't care that I didn't have a degree, and SVA has been unbelievably liberal too. Ah, America is a wonderful place. I learned about design by doing. I got jobs when I was a teen. That became my undergrad and graduate school. As I said, I've been very lucky. And even more, I've met and befriended some amazing people, who were, in effect, my teachers. LUCKY LUCKY LUCKY!

You went from art directing the sex rag Screw to a long-standing position at the Times. How did what you learned at Screw apply to your new job?

A rag? That's not nice. It was on newsprint, but it wasn't a rag. I learned about the techniques of page layout and production doing that and other newspaper jobs. Everything became a building block.

The Design Mind Award recognizes those who have changed design thinking or practice. How do you think you've changed the design world?

I think I was one, but not the only one, to open design up to journalistic critique and critical history. Phil Meggs was important in this area too. As is Rick Poynor. And Ellen Lupton owns a piece of this. But I'd say, I helped make graphic design more literary and historical. And I've found ways of bringing many others into the fold.

What was it like meeting the first lady at the awards ceremony? And what design-related advice would you give to the Obama administration?

She is a magnificent woman. Graceful, smart, witty and generous. I told her, "We love you." She invited 15 high school students to attend the NDA lunch. You can be certain their lives were changed. Especially the young girl sitting next to Mrs. Obama. Oh, how I pray she and Mr. O. will continue for the next four years. Graphically, they don't need my advice. But in terms of designing the current administration, I'd say: Don't take any shit!

Along with charting the way forward, you've done tremendous work in reminding us of forgotten designers of the past. Is there still important work to be resurrected?

You bet. The amount of history waiting to be mined is extraordinary. If only you could make a living doing it.

What would you say to a young student who is considering a career in graphic design but is worried that she'll end up creating corporate advertising for the rest of her working life?

Don't create corporate advertising all your life! There are plenty of niches one can find to patch good things together.