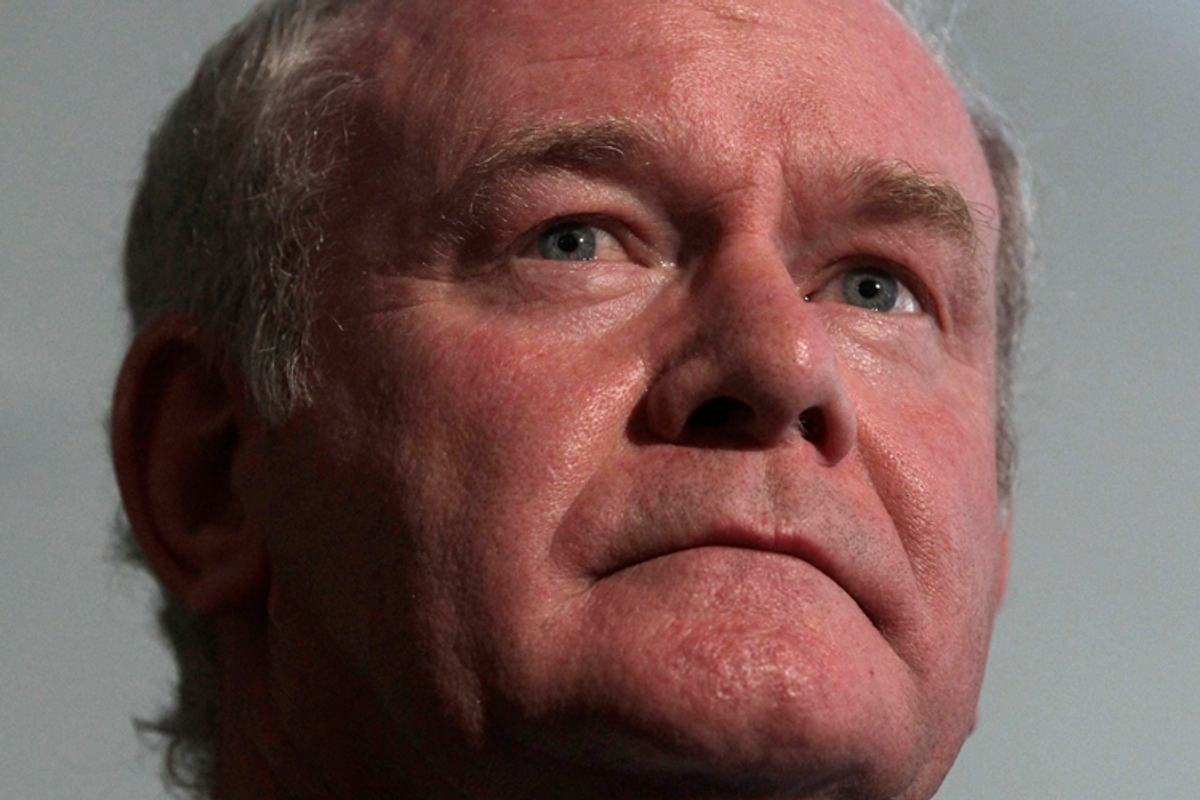 DUBLIN, Ireland -- A former commander of the outlawed Irish Republican Army has created a political earthquake in Ireland by entering the campaign for president of the Irish Republic -- with an outside chance of success.

Martin McGuinness, currently deputy first minister in the Northern Ireland power-sharing executive, will contest the Oct. 27 election as a candidate for Sinn Fein, the only political party which operates on both sides of the border.

McGuinness has never denied his membership in the IRA, which was responsible for the death of 644 civilians during its three decade-long campaign of violence. He said Thursday he had never knowingly killed anyone but acknowledged taking part in gunfights in the early days of the Troubles, when the IRA took up arms against the British Army.

In recent years, the 61-year-old Derry man has become better known as an architect of the Irish peace process, which resulted in the disbandment of the IRA in 2008.

He is gambling that his high profile and engaging personality will attract a significant percentage of the vote in the Republic, where the left-wing Sinn Fein party is the fourth-largest in the Dublin parliament. In Northern Ireland, Sinn Fein and the pro-British Democratic Unionist Party work well together in the power-sharing executive in Parliament.

The former street-fighter and his protagonist, firebrand Democratic Unionist Party leader Reverend Ian Paisley, were pictured laughing together so often when joint first ministers from 2007-2008 that they were nicknamed "the Chuckle Brothers."

Paisley has since been replaced by Peter Robinson, with whom McGuinness also enjoys a good relationship.

Conventional political parties in the republic have on the other hand refused to contemplate coalition with the former IRA apologists, who commanded only 10 percent of the vote in the last general election.

McGuinness's entry into the fray Sunday is widely seen as an audacious bid by Sinn Fein to raise its electoral profile in the republic and to gain retrospective legitimacy for the IRA's campaign.

However the ploy could backfire as the gloves come off and the two candidates from the current governing coalition, Gay Mitchell of Fine Gael and Michael D. Higgins of Labor, start aggressively interrogating his past and highlighting IRA atrocities during the time he was an active member.

Former Justice Minister Michael McDowell said the election of former IRA leader would be a travesty "because the president embodies what we believe about ourselves."

The Irish president has few executive functions but is titular head of the republic's armed forces, whose legitimacy the IRA long rejected.

Campaigning Tuesday at the national plowing championships (a major annual agricultural show) in County Kildare, McGuinness said, "Both the British Army and the RUC (police) murdered people in my city before the IRA fired a shot, and I was part of a young generation that decided to stand against them in the Bogside, in Free Derry, and I make no apologies for that."

If his commitment to peace was in doubt, "I don't think I would have been invited to the Oval Office on three occasions to meet with three American presidents, or to Johannesburg to meet with Nelson Mandela, or to Brussels to meet with the president of the European Union."

He said that if he succeeds the outgoing president, Mary Aleese, who is barred from running again after serving two seven-year terms, he would take only the minimum wage of 1462 euros (about $2000) a month, and donate the remainder of the presidential salary of 325,000 euros back to the state.

This promise will resonate with working-class voters angry at cutbacks in social services due to the excesses of politicians, bankers and developers that have left Ireland in financial crisis.

In an Irish national radio poll last Tuesday, in which 22,000 listeners took part via text message, McGuinness came first of seven candidates with 28 per cent, slightly ahead of an independent hopeful, Senator David Norris, and far ahead of the other candidates.

Norris, an openly gay civil-rights activist and noted Joycean scholar, has returned to the campaign after stepping down last month over a controversy concerning his former partner.

Key supporters left his team when it was revealed Norris interceded with the High Court in Israel fourteen years ago to request leniency for his former partner, Ezra Yizhak Nawi, who had been convicted of the sexual abuse of a 15-year-old Palestinian boy.

Buoyed by opinion polls showing that he remained popular with voters, Norris announced Sept. 15 that he would again seek the required backing of 20 members of the Irish parliament or four county councils for nomination.

A decision last Tuesday by leading opposition party Fianna Fail to bar its members from supporting independent candidates appeared to mean that Norris had little chance of getting the necessary endorsement. Still, he is fighting hard, and may actually get the required 20 endorsements.

McGuinness has been temporarily replaced as deputy first minister in Northern Ireland by party colleague and education.