The most nightmarish holiday commute ever

"Last Train Home," a powerful documentary about a Chinese family, is a moving and near-perfect piece of art 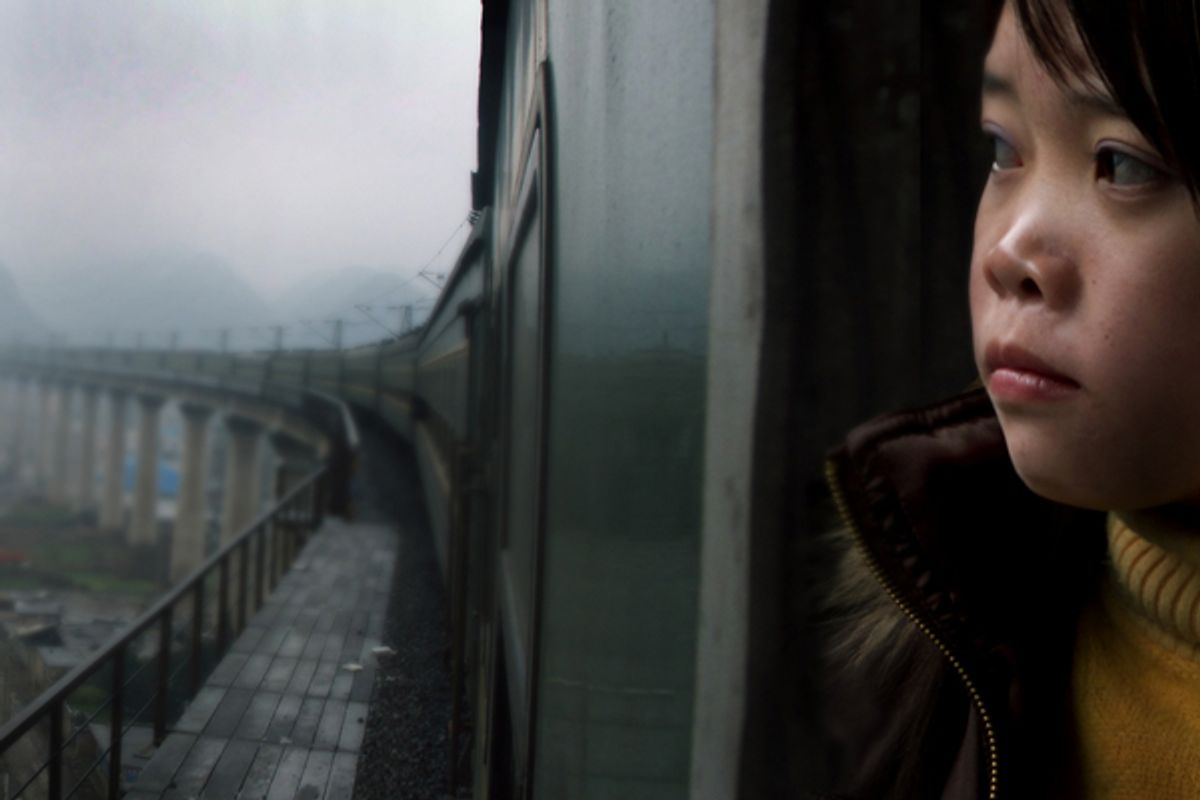 Do not miss "Last Train Home."

This 2010 feature, which makes its PBS debut tonight on the documentary series "P.O.V.," is about a Chinese family joining 130 million migrant workers as they journey from the city to their home in the country to reunite with their families at New Year's. Directed by Lixin Fan, "Last Train Home" is not a travelogue, a polemic or a history lesson, but simply a story of people, told with elegance and care. It's also a rare recent documentary that avoids every modern nonfiction cliché. It features no narration by moonlighting movie stars, no bouncy hand-held camerawork, no fast cutting, no clever graphics, no reenactments, no archival photos, no razzle-dazzle montages with ironic pop songs or Philip Glass music, no horrifying family revelations, and no competitions ending with a teary-eyed champion hoisting a trophy. All it does is point a camera and capture life as it happens.

The main characters are an extended family from China's Sichuan province -- country people who spend most of the year in the industrial city of Guangzhou. They work endless hours in garment sweatshops for pitiful wages, yet still manage to save their money and send most of it back home. The film focuses on a married couple, Zhang Changhua and Chen Suqin. They let their eldest daughter, 17-year-old Zhang Qin, postpone college and join them in the city to supplement the family's meager income. Their decision creates as many problems as it solves.

The family's story unfolds in an elegantly arranged series of images, moments and scenes, starting with the parents' journey back home and continuing through an account of their yearly stay in Guangzhou, their daughter's blossoming into a lovely and stubborn young city woman, and their long trip home for the holidays. The journey back to Sichuan province gives the film its title. This is no casual commuter jaunt; it's the single largest regular migration on the planet, moving 130 million people across a vast stretch of mountainous terrain.

When the family arrives at the Guangzhou train station, they find untold thousands jammed shoulder-to-shoulder, waiting for a train that seems as though it may never arrive. For all the nation's pride in efficiency, this scene suggests a near collapse of government competence. No one seems to know when the train is coming or why it has been delayed. Some travelers have been standing there for a week. The public square near the train station is too small. The travelers' tempers shorten as the days stretch out, and their stomachs ache from lack of food and water. The police do what they can to keep order, but they're outnumbered, and they soon become targets for depressed and furious travelers. "Today you work behind the fence!" a man yells at a cop who won't let him past a barricade to locate the daughters he lost on the other side. "But tomorrow you'll be standing here, in my shoes!"

The director, who doubled as cinematographer, surveys this madhouse and captures many harrowing moments, including a surge that almost becomes a mass trampling. When the train finally arrives, our family squeezes into it, three more sardines packed in a huge rectangular tin. But they don't dwell on their discomfort because it's better than the nightmare they left behind -- and because now, at least, they're going somewhere.

This magnificent section is the highlight of "Last Train Home," but the story before and after it is just as gripping, if much quieter. Fan, a Chinese-Canadian filmmaker, embodies the fly-on-the-wall aesthetic of mid-20th century documentaries: the Maysles brothers ("Grey Gardens"), D.A. Pennebaker ("Don't Look Back"), Frederick Wiseman ("Titicut Follies"). He doesn't blatantly editorialize with his shots or cuts, he just turns you into an invisible, extra family member, a silent observer. His camera follows along behind or beside the family as they work in factories, wait for the train, ride home, eat dinner with their relatives, discuss their money problems and argue about their family's past and future. The changing face of modern China is expressed not with charts, graphs and narration, but in silent, often stunningly composed images: long shots of verdant countryside that contrast against the hard-edged cityscapes; images of cars crawling along gridlocked streets and transformer towers cutting the sky into geometric mosaics; stacks of newly-stiched bluejeans piled on factory floors.

The film's heart is the relationship between the parents and their daughter, and the difficult, sometimes heartbreaking contradictions of family life. Zhang and Suqin went to the city for the good of the family, to make enough money to raise their standard of living and improve their childrens' prospects. But this same decision estranged them from their kids -- particularly Qin, who was raised by her grandparents. One of the film's most lovely and powerful moments finds Qin out in the woods lit by a small fire, talking to her late grandfather's spirit. She considers him her true father, and her grandmother her true mother. She loves but resents her own parents. "All they care about is money," she says, with the bitterness of a bright young woman who has no idea how impossible it is to be a parent. Her grandmother has lived long enough to put such conundrums in perspective. Sitting at a dinner table with her loved ones, she chastises her grandson for not eating the bitter melon she's laid out for him. "Taste the bitterness first," she tells him. "The sweetness will follow."