Early signs of a "Bridesmaids" bump

A veteran producer sees not just success for Kristen Wiig's blockbuster, but signs of a lasting legacy 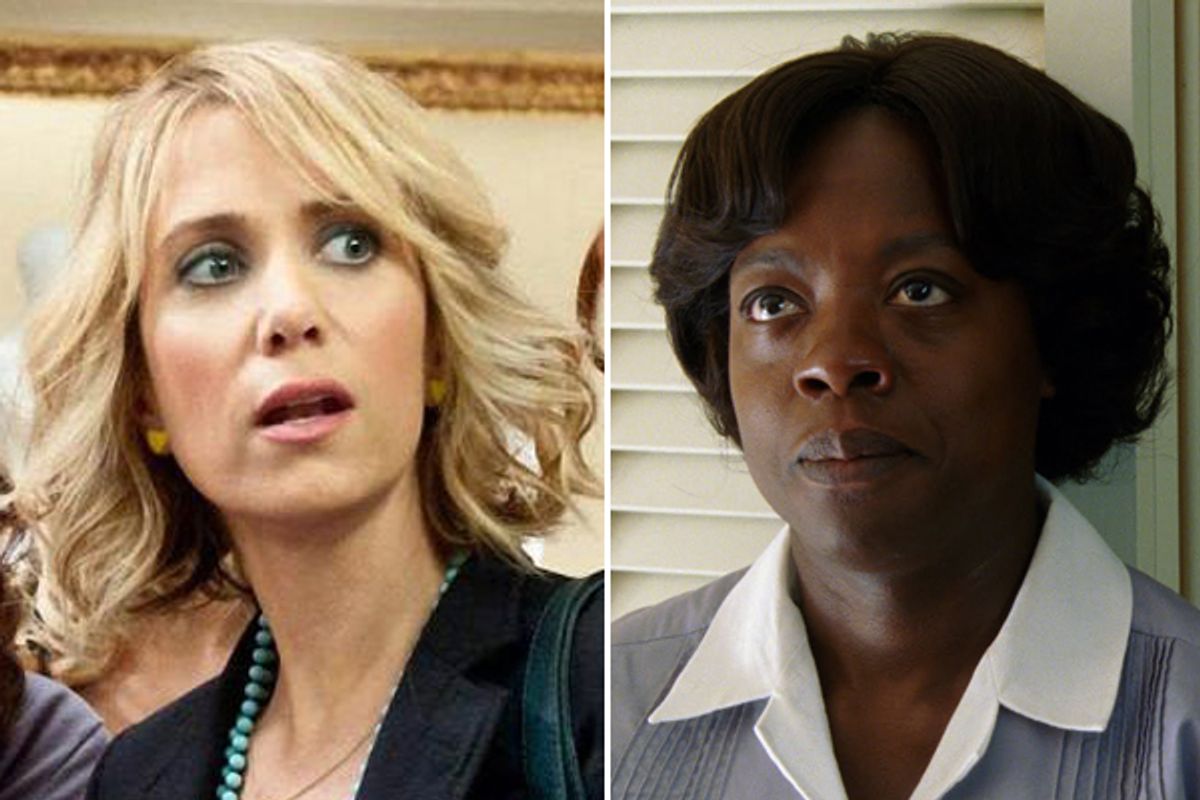 Kristin Wiig in "Bridesmaids" and Viola Davis in "The Help"
--

Last week, the summer's surprise blockbuster, "Bridesmaids," was released on DVD, after a spectacular run both in the United States and abroad. The fortunes of the film, which starred a brace of funny women and dealt equally in fart jokes and friendship, were regarded as crucial to the future of women in entertainment.

Hollywood, perpetually on the verge of never making another movie for anyone but teenage boys, was in need of a slap in the face, reminding it that women buy tickets, fill theaters, tell friends they loved it -- and know men who are occasionally eager to see the opposite sex portrayed compellingly on celluloid. "Bridesmaids" delivered a wallop, bringing in more than $280 million worldwide, and drawing an audience reported to be a third male, and largely over 30.

But has it actually whetted the film business's appetite for more female-driven projects? Salon called Lynda Obst, producer of movies like "Sleepless in Seattle," "Contact" and "How to Lose a Guy in Ten Days," the television show "Hot in Cleveland," the author of "Hello, He Lied" and all-around movie sage, to see what, if anything, has changed in her town this summer.

Did the success of "Bridesmaids" make a difference to your business?

Yes. It had the biggest impact of any women's movie that I can remember in my career.

In your whole career, which began with "Flashdance" in 1983?

Yeah. It came at a moment when any movies for women, women's comedies -- forget dramas, there are no dramas for anybody -- but women's comedies, women's thrillers were going to get put by the wayside forever. Women's projects were dying everywhere. That's why the opening of "Bridesmaids" was so critical for every woman in features, why its success was attended with such profound interest by every woman writer, producer and director in town.

The second important factor was that there were no stars in the movie and it wasn't tracking in advance.

And that matters because it means that it was the material, not a movie star, that drew people to theaters?

Yes. Its success wasn't automatic. A star opens a movie. Sandra Bullock opens a movie. But there was nobody in this movie who had ever been in a movie before, so it's the hardest kind of movie to open.

It means that its success was due to the fact that people enjoyed it, and gave it good word of mouth once the movie started screening. Which leads us to the gigantic thing, which was the revelation that women can open a movie, and also, that this [women's movie] crossed over. Men came. It drew women of all ages and it drew guys and was a major hit. And not just domestically, which is part two of this gigantic thing, because the movie business right now is being driven by international box office.

Comedy doesn't usually travel well. Movies that travel are movies with very little dialogue, usually dependent on action or family content or big international stars. But "Bridesmaids" did very well internationally. The concept was easy to understand in all languages. It gave us a clue as to what movies will work internationally with women in them. So what we learned is: Broad comedies will sell abroad, even with broads.

What are the immediate effects of this?

There are suddenly projects for women! I'm pitching one right now that is a female-based comedy and people are really responsive to it. And then my directing debut, which was dead in the water at New Line, went from having no momentum to having momentum, the weekend right after "Bridesmaids" opened. "Bridesmaids" meant that the idea of being able to make a movie about women was resuscitated.

Well, for now. What if the next female comedy flops?

If the next one flops, who knows? Two action movies flop and it means nothing; one women's movie flops and it's the end. But "Bridesmaids" was followed immediately by the success of "The Help," which was terrific because that was driven by women too.

So what we're finding in the American market is that younger male eyeballs are disappearing in large numbers, going to video games, going to the Internet. But women are going to the movies, if you make movies for them.

Now, does this mean we will stop making movies for the younger male quadrant? No, because the young male quadrant likes the same movies as international audiences -- action movies, man movies.

Are studios pursuing women's projects or are people just feeling like they can pitch them again?

I think the latter. But I think studios were suddenly receptive to them.

This is not the first time in recent memory that a woman's movie has done well and studios have failed to notice in any permanent way. "The Devil Wears Prada," your movie "How to Lose a Guy in Ten Days," "Sex and the City" have all been big women-driven hits, and yet women's movies were on the brink of extinction.

Studios have institutionally short memories when it comes to women's movies. "Sex and the City II" did better internationally than it did domestically, which would have made you think that they would have noticed it. I mean, that's what inclines Fox to make "Ice Ages"; sequels do so well internationally. But studios don't seem to generalize by the same rules in women's movies as they do for other movies.

Every time a woman's movie does well, it's a brand-new fact. Every time we rediscover the female audience, it's astonishing.

So it's possible that despite "Bridesmaids'" success, four years from now you and I will be having the same conversation about the death of women's comedy?

That's depressing. But back to the success of "Bridesmaids." There was a certain amount of social awareness around going to the movie. Because of the press it got, women seemed to be aware that going to see the movie was not just about enjoying it, but about sending a message to Hollywood. Do you think that had an impact on its box office?

Well, I know there was tremendous awareness in Los Angeles that we had to open this movie. I believe it happened in New York too, but I don't know that that happened nationally.

What happened nationally was that there was a hunger for something for women to relate to, because there's usually nothing out there for them. It's what happens with an urban audience with Tyler Perry.

I had a sense from friends in other cities that they were going with their girlfriends and that they knew it was made for them.  It's so rare that there's a movie made for them. It generated such excitement.

You would think that that excitement alone would send a message that there is an eager audience out there for material about women.

Well, I think you can see a lot of that reaction on television. It is the year of women on television. Television is much more female-friendly than Hollywood. There are a tremendous number of female executives, and when they see something like "Bridesmaids," it's much easier to react fast to it, and there's less institutional resistance. They love the zeitgeist.

But timing-wise, this season of television was already a done deal before "Bridesmaids" opened, so it can't have been a reaction, can it?

Well, the [final] decisions about this current fall season were made at the upfronts, which roughly coincided [Editor's note: actually, directly coincided in mid-May] with the opening of "Bridesmaids," so there actually could have been a connection.

But also, I have just been through the next season of creative development and let me tell you it's just as female-friendly as the one that's on air now. There are shows about women and girlfriends and not just couples. There is television about women, for women. Real women.