Civilization gets a prehistoric reboot in "Terra Nova"

In Spielberg\'s new drama, a time-space rift lets us escape the consequences of befouling Earth and start over 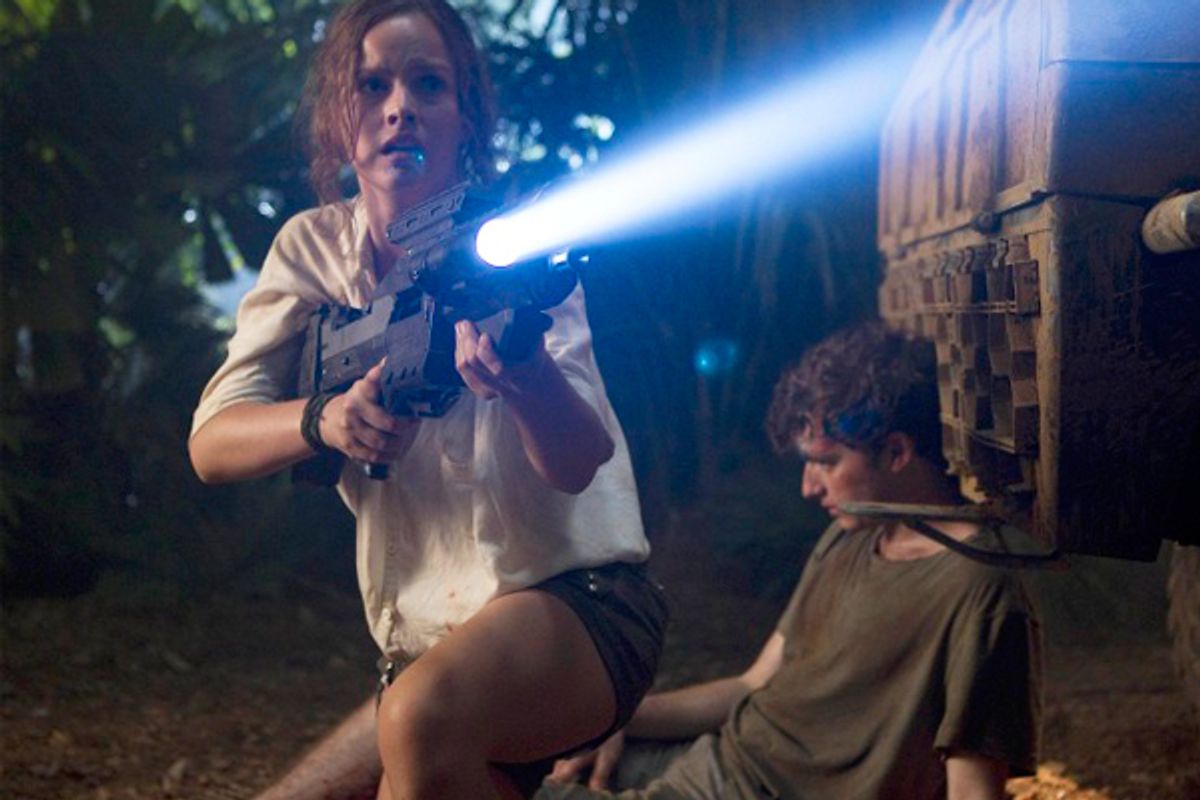 Steven Spielberg has been playing God ever since 1977's "Close Encounters," envisioning  scenarios in which individuals, groups, communities, civilizations, even whole species are figuratively or literally raised from the dead. The new Fox drama "Terra Nova"-- which is created by Kelly Marcel and Craig Silverstein but executive produced by Spielberg, and which fits comfortably within the Spielberg continuum -- could be the maestro's most audacious resurrection yet.  I'm not a fan of of tonight's two-hour pilot -- like most premieres, it's mostly exposition wrapped in spectacle, and it has other problems that I'll address in a second. But I can say that if you're a science fiction buff of any kind, you'll want to check it out just for the premise. The network's marketing campaign is trying to position "Terra Nova" as another "Lost," and the hype fits in one respect. Just as "Lost" fans were happy to spend hours debating the scientific, philosophical and theological aspects of the show even though individual episodes disappointed them, I can envision "Terra Nova" sparking a similarly devoted following -- one that gathers online every Monday night to bitch about new episodes after they've aired, then spends the next six days geeking out over implications that the show failed to explore.

The premise is "Jurassic Park" plus "The Time Machine," with a post-apocalyptic kick-start. The circa 2149 Earth depicted in tonight's two hour pilot (Fox, 8 PM/7 central) is a rancid, corrosive dump. The planet is overpopulated, undernourished, and ruled by a blandly fascistic government that's concerned with stopping citizens from bogarting the few remaining resources.

Our heroes are the Shannon family: cop dad Jim (Jason O'Mara), his doctor wife Elisabeth (Shelly Conn), and their three children Josh (Landon Liboiron), Maddy (Naomi Scott), and Zoe (Alana Mansour). Population control laws decree that families can't have more than two kids, which means the littlest Shannon, elementary school-age Zoe, is human contraband. Zoe's illegal existence sets the pilot's story in motion and fuels its most emotionally intense scene, the prologue in which jackbooted thugs invade the Shannons' apartment, confiscate Zoe, and arrest Jim, who blew his stack and punched a government trooper. Director Alex Graves -- who helmed the pilot episode of "Fringe" -- stages the scene with a silent-movie purity of feeling. The family's shrieks and the devastating closeups of the too-cool teenager Josh weeping linger in the mind even after the episode has flashed forward two years to set up the series proper. Jim is in prison for assaulting that cop, Zoe has been taken away by the bureau of population control, and the planet is seemingly even nastier than it was before.

But there's hope: scientists have discovered a rift in time and space that lets Earthlings pass through a wormhole and re-emerge in a parallel universe 85 million years ago. Through a series of contrivances too complex and cheerfully silly to recount here, the Shannon family makes it to the other side of the wormhole. They find a virgin landscape of lush mountains and dense rain forest populated by gigantic reptiles and insects -- a place that's like a prehistoric riff on the idea the American frontier as a place of personal rebirth.

The special effects and production design suggest a discount version of Spielberg's "Jurassic Park" movies; they're more exciting to think about later than they are to watch, except during an extended carnivore attack sequence in the film's final third that suggests a dry run for the inevitable first-person shooter tie-in game for PlayStation. (If you forget to gasp at the show's production values, Brian Tyler's promiscuously awestruck score will prompt you.) Graves and his screenwriters -- Craig Silverstein, Kelly Marcel, Brannon Braga and David Fury -- handle the narrative housekeeping efficiently but without much snap.  Twists, revelations and qualifiers pop up every few minutes.  It's OK to interact with prehistoric nature here because the humans aren't colonizing "our" Earth, but an alternate, parallel Earth; shooting an allosaurus or squashing a butterfly a la Ray Bradbury's "A Sound of Thunder" won't affect anything on the other side of the wormhole (at least that's what the show tells us). You're not supposed to go beyond the electrified fence, but lots of teenagers do, at their peril.  We're assured that Terra Nova is the only human outpost on the other side of the wormhole -- but is it?

Stephen Lang's Commander Nathaniel Taylor is a gruff but benevolent guide through this world. With his "Avatar"-buffed physique, salt-and-pepper beard, and terse-but-caring demeanor, the actor channels Burt Lancaster during his lion-in-winter phase. In a throwaway line, he reveals that he was the very first person to cross through the wormhole, and that the others in his party were delayed by a few minutes, which translates into months on the other side -- all of which means Taylor had to survive alone for half a year in dinosaur-infested jungles.  Wouldn't you rather see that show?

There's a lot of information to process, but the charismatic Lang spoons it out so deftly that you never feel as if you're having Val Kilmer's final exam dream in "Top Secret!"  If only the show rose to his level. The other characters (and actors) are likable but bland. And although "Terra Nova" flatters itself into thinking you'll be gobsmacked by everything it shows you, nothing in this pilot is as compelling as the idea for the show, which begs philosophical and ethical questions that Spielberg and company (for now, at least) aren't  interested in addressing.

"Terra Nova" is properly fixated on the threat of environmental collapse, and on the hope that science will find a way to help us begin again. But isn't it just as morally wrong to reboot civilization in an alternate timeline as it was to despoil the Earth that lies dying on the other end of the wormhole? Aren't the Terra Nova settlers violating the Prime Directive of "Star Trek" with a reckless arrogance that would make James T. Kirk upchuck his Saurian brandy? Yes, the Prime Directive only applies to sentient creatures, but what do you think would have arisen eventually on this alternate Earth? Isn't the Terra Nova project a futuristic version of the American myth of Manifest Destiny, which prizes settlers' desires over the integrity of a "new" land and its indigenous inhabitants? According to Spielberg and company, it is morally wrong for humans to treat one version of Earth as a toilet, but OK to slip through a time-space rift, insert themselves into the other Earth's Cretaceous period, and alter whatever evolutionary process would have occurred if they'd never built cute little cottages there? Will the show confront these concerns in future episodes, or will it just whistle "The Star-Spangled Banner" and hope nobody cares? Is there such a thing as temporal imperialism? Whose blank slate is it, anyway?

Geeky questions, I know. But what the hell: we might as well start obsessing over them right here rather than saving them for inevitable "Renew Terra Nova" Facebook page.