Still smarting from an off-hand insult to the all-powerful financial sector, JPMorgan's CEO cozies up to the GOP 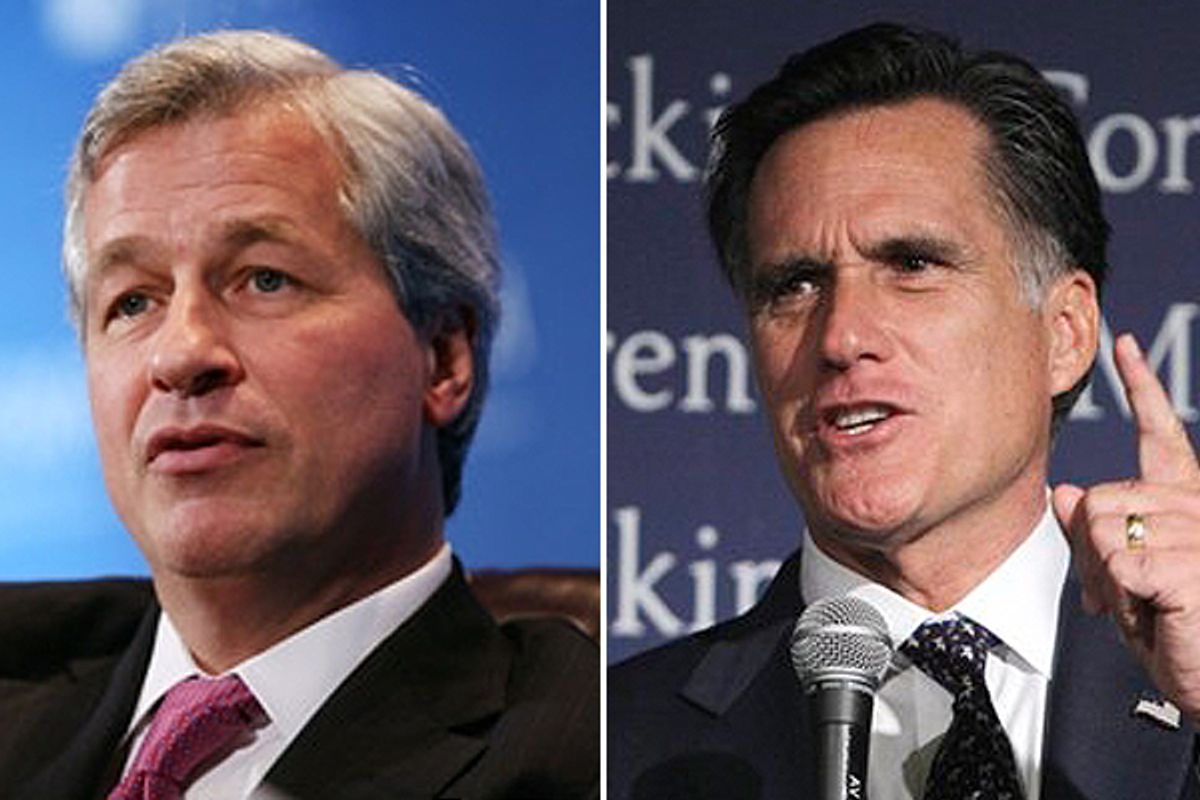 Jamie Dimon, CEO of JPMorgan Chase, is not supposed to endorse a presidential candidate, because he sits on the board of the Federal Reserve Bank of New York, but he is out partying and attending fundraisers with former Massachusetts governor Mitt Romney. (Of course, Dimon also probably shouldn't have accepted billions of dollars from the Fed while sitting on the New York Fed board either, but that happened.)

Dimon is a Democrat and former BFF of President Barack Obama, but one day Obama said "fat cat bankers" and everyone on Wall Street threw a tremendous tantrum. The president has gone on to lightly criticize the financial industry and endorse a plan to slightly raise income taxes on very wealthy people, which has reportedly driven scores of Democratic backers from the finance industry into the open arms of the GOP.

Here's someone explaining the switch (this is an anonymous source talking to the New York Post, which has a vested interest in presenting the Democratic Party and Barack Obama as avowed enemies of capitalism and free enterprise, but I assume this is a fairly accurate explanation of Dimon's thinking):

One insider said, “There is not a person on Wall Street, with the exception of the genetic Democrats, who would get anywhere near supporting Obama. The hostility to the administration is huge. Dimon will continue to look bipartisan, then work behind the scenes to get a Republican elected.”

Dimon supporting a Republican is only natural. Billionaire financial executives have obvious reasons to support a Republican presidential candidate. The Republican party line is that rich people should keep more of their money and the financial sector should be lightly or not-at-all regulated. But when the "longtime Democrats" who also happen to be bank executives make the switch to the Republican party, they for some reason feel the need to come up with justifications beyond material self-interest. Thus, flailing attempts at sustaining the Democratic party's disappearing middle-class base by lightly soaking the rich are seen as horrific personal attacks on innocent bankers. This makes these billionaires seem like hypersensitive children, but that is apparently preferable to being seen as attempting to maximize their profit by directing political support to the people most likely to allow them to continue vacuuming up and hoarding the world's wealth.

The Democratic party has been extraordinarily friendly to the interests of the financial sector since the Clinton era, but they are learning now what should've been obvious all along: It is impossible to be more billionaire-friendly than the Republican Party, because the Republican Party's entire political philosophy is that government should exist solely to serve the interests of the wealthy.

Dimon's argument hinges on the idea that it's unfair to tarnish his industry as a whole because of the actions of a few bad apples. JPMorgan Chase, you see, is one of the "good banks," which means it is one of the banks that survived the 2008 financial crisis and remains incredibly profitable. It does not mean that the bank is in any sense a positive force for good or a productive arm of a healthy economy, unless you think illegally foreclosing on military families and driving counties to the brink of bankruptcy while bribing officials are good, productive things for Jamie Dimon's firm to be doing with its billions of dollars of revenue.

The moral is that we as a nation must never spook the skittish "job-creators" like Dimon, lest they leave us for greener pastures, as Dimon has left Obama for Romney.