The hardy myth of "job creators"

From Ayn Rand to John Boehner, a persistent talking point 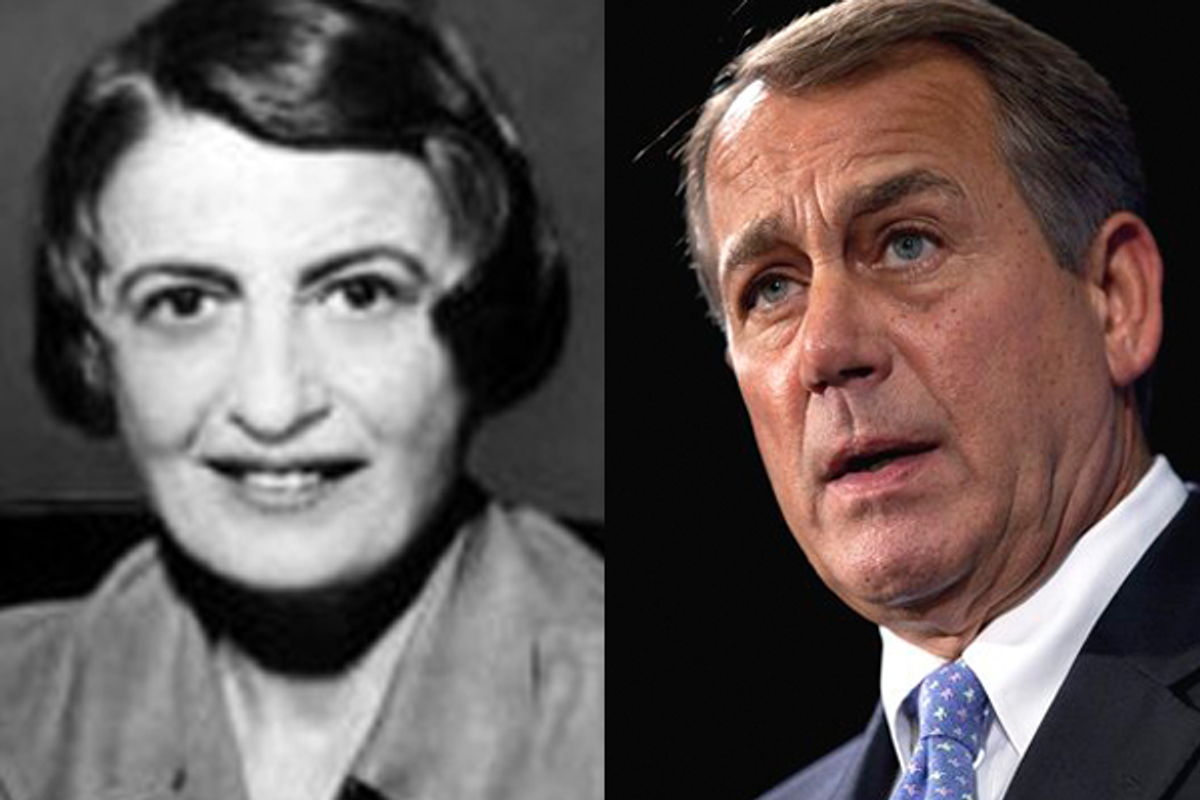 With the announcement last Monday of President Obama's plan to pay for his jobs bill with, among other things, the so-called "Buffett Rule," we're going to be hearing a lot more about the "job creators." Over the last year, Congressional Republicans have consistently invoked them as a hex of sorts against any proposal to raise new tax revenue. "I am not for raising taxes in a recession," Eric Cantor declared last November, when the Bush tax cuts were a bargaining chip in the protracted budget debate, "especially when it comes to the job creators that we need so desperately to start creating jobs again."

Ten months, no new taxes, and one debt ceiling crisis later, Cantor said the same thing last week in response to the president's jobs bill: "I sure hope that the president is not suggesting that we pay for his proposals with a massive tax increase at the end of 2012 on job creators that we're actually counting on to reduce unemployment." Given that 44 percent of the nation's unemployed have been without work for at least six months and more Americans are living below the poverty line than at any time in the last 50 years, one marvels at Cantor's faith in the truant "job creators" as well as his forbearance in the face of human misery. To the jobless, he is counseling the patience of Job.

But who exactly are these "job creators?" The phrase is not new. Republicans have been using it for years to underscore a particular vision of capitalism in which those who have benefitted most by the system are also most essential to its continued success. As long ago as 1991, Newt Gingrich characterized Democratic opposition to a cut in the capital gains tax as evidence that liberals reject this vision. "They hate job creators," he told a gathering of Senate Republicans, "they're envious of job creators. They want to punish job creators." With no apparent sense of irony, Gingrich added this was proof liberals "believe in class warfare."

A more telling example for our current political impasse is the debate over the 1993 Clinton budget plan, which aimed to cut the deficit by, among other things, raising the top income tax rate. Congressional Republicans fought the bill tooth and nail, no one more so than former Texas Senator Phil Gramm. On the eve of its passage, he expressed the hope that the bill would "defy history" and prove that "raising taxes on job creators can promote investment and promote job creation." Gramm, of course, did not think this was very likely to happen. "Only in Cuba and in North Korea and in Washington, D.C., does anybody believe that today," he said, "but perhaps the whole world is wrong."

Hindsight suggests that the world wasn't wrong so much as Phil Gramm, along with every other Republican member of Congress. Not one of them voted for the bill, which cleared the House by only two votes and required Al Gore's tie-breaking vote in the Senate. While higher taxes on the "job creators" proved no obvious hurdle to economic growth — the economy grew for 116 consecutive months, the most in U.S. history — it did cut the deficit from $290 billion when Clinton took office to $22 billion by 1997 and helped put the country on a projected path to paying off the national debt by 2012.

So much for ancient history. If the term "job creators" is no new addition to the lexicon of American politics, it has enjoyed quite a renaissance since President Obama took office. A Lexis-Nexis search of U.S. newspapers and wire services turns up 1,082 individual mentions of "job creators" in the month before the debt ceiling deal was reached, or just 175 fewer mentions than for George W. Bush's entire second term.

Jon Stewart, for one, did not fail to notice the uptick. "Republicans are no longer allowed to say that people are rich," he noted during the deficit ceiling debate, "You have to refer to them as ‘job creators.'" Stewart's observation is funny only to the extent to which you believe that saying you're a member of the top tax bracket and saying that you create jobs is not an obvious redundancy. If you believe, however, that the cast of "Jersey Shore" has just as much claim to being called "job creators" as Bill Gates or Steve Jobs, then Stewart's joke not only falls flat, but misses the point. The wealthy are the "job creators," whether or not they spend their time actually trying to create jobs.

The problem, of course, with upholding a definition of "job creators" that does not turn on the dedicated effort to create jobs is that it becomes hard to figure out what distinguishes the "job creators," as a group, from everyone else — at least beyond their relative wealth. All Americans spend, save, and invest in varying degrees; most just do so with a lot less money.

In this light, the "jobs creators" rhetoric highlights a theory of capitalism in which those at the very top of the economic pyramid end up supporting the base. We might call this theory the Visible Hand of Capitalism in order to distinguish it from Adam Smith's Invisible Hand. In "The Wealth of Nations," he famously located the enduring success of capitalism in an increasingly complex system of work and exchange that sees "the assistance and co-operation of many thousands." In such a society, no single group can be meaningfully called the "job creators." They are as much the managers of capital as the men on the factory line.

As an intellectual matter, the Visible Hand of Capitalism has enjoyed support from figures as disparate as Destutt de Tracy, the French philosopher and economist whom Thomas Jefferson championed, to the steel baron and indefatigable philanthropist, Andrew Carnegie. As a rhetorical matter, however, the phrase "job creators" appears to come directly from the work of Ayn Rand. She favored the term "creators" to describe an elite caste in society and her highest human ideal.

John Boehner made reference to "Atlas Shrugged," Rand's most famous novel, in a speech he gave recently to the Economic Club of Washington, D.C. "Job creators in America are essentially on strike," he said, in an obvious nod to the decision by the "creators" in the novel to go on strike in defiance of an intrusive federal government. The nation immediately begins to falter, and the books concludes with its hero, John Galt, giving a marathon address in which he explains to the rest of the country why America is crumbling. The nation, in brief, has scared away the very people who keep the economy working, leaving behind those who are ill-equipped to fend for themselves.  Describing the economic and social theory underpinning this vision, Galt says:

In proportion to the mental energy he spent, the man who creates a new invention receives but a small percentage of his value in terms of material payment, no matter what fortune he makes, no matter what millions he earns. But the man who works as a janitor in the factory producing that invention, receives an enormous payment in proportion to the mental effort that his job requires of him. And the same is true of all men between, on all levels of ambition and ability. The man at the top of the intellectual pyramid contributes the most to all those below him, but gets nothing except his material payment, receiving no intellectual bonus from others to add to the value of his time. The man at the bottom who, left to himself, would starve in his hopeless ineptitude, contributes nothing to those above him, but receives the bonus of all of their brains.

For all that it lacks in human decency, Rand's vision of who makes capitalism work at least has the advantage of isolating a group of people who actually create something. By contrast, the current "job creators" rhetoric seems to elevate a group of people whose shared tax bracket is their only outstanding trait.

As the debate over the president's jobs bill takes shape, the "job creators" rhetoric is certainly deserving of a little more scrutiny, especially by those who don't qualify for the distinction. Otherwise, they might as well accept the judgment of a far greater authority than even John Galt:

The fault, dear Brutus, is not in our stars,
But in ourselves, that we are underlings.