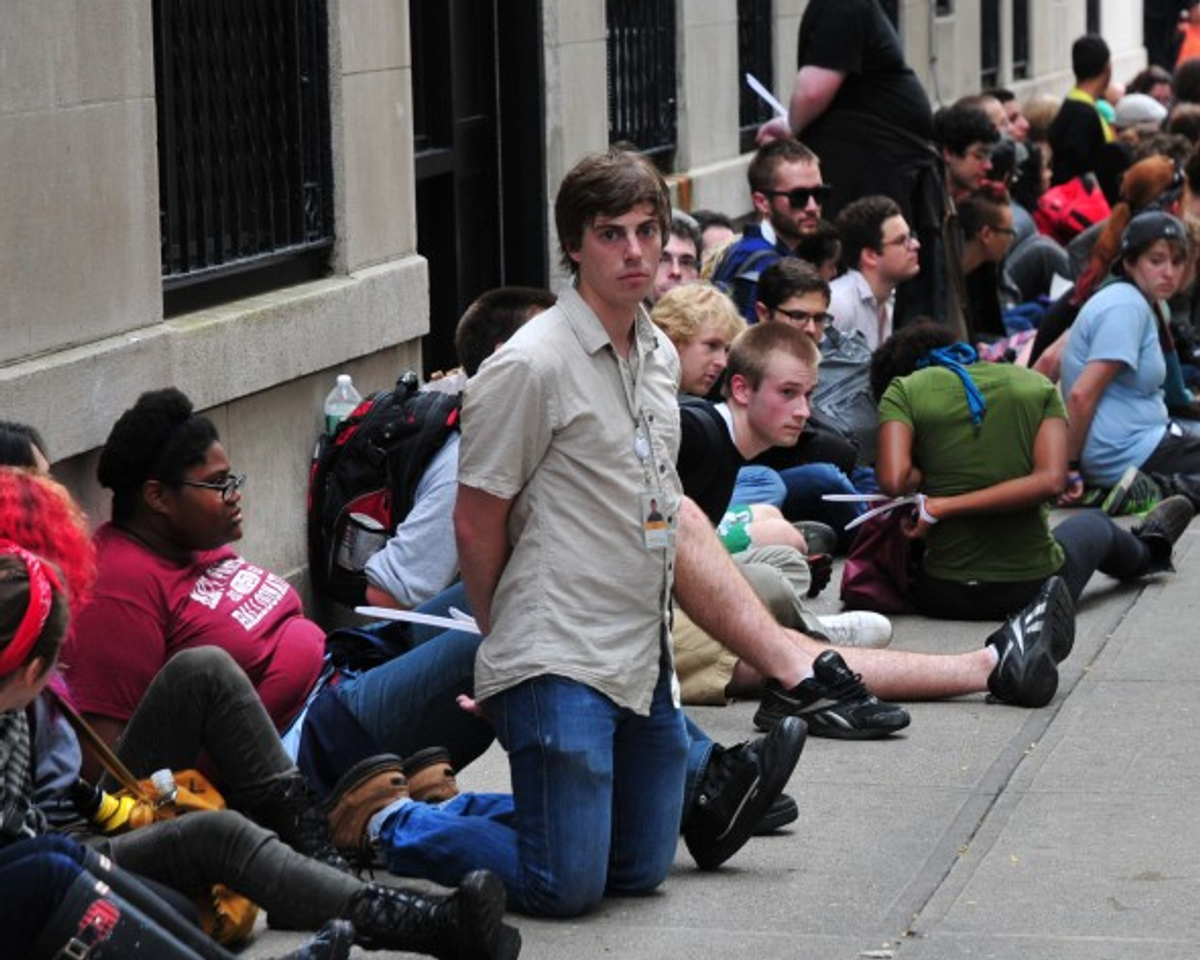 On Sept. 24, while working on a story about citizen journalism for my employer, I found myself arrested, along with many other people. My arrest gave me a unique vantage point on the risks and rewards of citizen journalists, those non-professionals who capture stories (usually without pay) using videos and images via portable technology like a cell phone camera. Anyone, even a passerby or a police officer can be a citizen journalist. That's its power.

My colleague Sam Lewis and I had previously covered Occupy Wall Street, an ongoing demonstration against economic inequality, on the first day it began, Sept.17.

Throughout that day we noticed many protesters using their mobile devices to document their own experience, sometimes for themselves or their own blogs, sometimes to share with bona fide media organizations. So, midday this past Saturday, Sept. 24, we headed to Union Square, where the Occupy Wall Street protesters had marched that morning from Lower Manhattan.

When we first arrived on the scene, protesters were marching along the sidewalk in unison, chanting. There was no sense of chaos. Many held video and audio recording devices, including camera phones.

However, the stream of protesters did disrupt traffic. Pedestrians wove in and out of the mass of protesters, some on their way to do Saturday errands, others who joined in for a block or two, chanting with the masses.

Sam and I were on the sidewalk observing the action. She was taking photographs, while I was juggling my reporter's notebook and the audio recorder we'd brought along to interview protesters about how they were using media throughout the day.

As more people spilled into the street, police started to demand that protesters stay on the sidewalk. But as people seemed to be retreating from harm's way, police began pushing the protesters. I saw police use large nets to corral people en masse. I watched as police pepper sprayed several young women in the face. (An NYPD spokesperson confirmed the use of pepper spray to MetroFocus.) I saw senior citizens and teenagers get arrested. I saw about 20 or 30 police officers tackle people and prod them roughly with police batons.

Video of the young female protesters against whom MetroFocus reporter John Farley saw the police use pepper spray. The headlines for this video was chosen by YouTube. Youtube/TheOther99Percent.

When I saw the young women get pepper sprayed, I ran over to interview them. While holding a microphone and wearing a badge identifying myself as an employee of "WNET – New York Public Media," I found myself suddenly roped into one of the large nets. I was thrown against a wall and handcuffed with hard plastic zip-tie restraints. I sat on the sidewalk with about 50 others. I yelled over and over "I'm press! I'm with WNET MetroFocus! Please do not arrest me."

I did not possess the press credentials that NYPD allocates to journalists. (As MetroFocus is less than three months old, neither I nor my journalist colleagues have yet met the NYPD's qualifications.) So even though I work as a professional journalist, the NYPD lumped me in with everybody else.

Lumped me in indeed. I was in police custody for nine hours, eight of which I spent in a jail cell at the 1st Precinct.

An NYPD spokesperson told MetroFocus on Monday that 87 people have been arrested in total since the Occupy Wall Street protests began last weekend; however, the Daily News reported that at least 80 people were arrested on Sept. 24 alone, mostly on charges of disorderly conduct and obstructing traffic. The NYPD would not comment further on my arrest.

Before we were all jailed, they took away everybody's possessions, including our notebooks, pens, cameras, recording devices and mobile phones. We were separated by gender.

My cellmates were about 35 other men. Most of them were protesters, with at least two bystanders who were snatched up while snapping souvenir photos in the afternoon mayhem. Most had spent quite a bit of time documenting the events of the day, including their arrests, with whatever media tools they had at their disposal.

My cellmate JRL, who preferred to be identified only by his initials, is a 23-year-old Brooklynite. He identified himself as a citizen journalist who streams live footage through Twitter. "We like the terminology 'grassroots media,' where people in the march were literally marching with laptops and webcams so that they could live broadcast. I think it's an immediate, never before possible edge," said JRL. He was arrested while carrying his Canon 7D camera.

I don't know precisely why I was arrested, though I have been charged with disorderly conduct. But what I realized is that in a sudden burst of urban chaos, how can the police distinguish between passersby and protesters who may be committing civil disobedience or any other type of punishable offense? Or between citizen journalists and professional journalists?

The arrest of my cell mate, Sam Queary, 24, adds another dimension to the issue: that of the inadvertent, spontaneous citizen journalist. Queary happened to be at work at Grey Dog Cafe near Union Square when the protesters marched by.

"I heard a commotion and went outside to find cops macing women and arresting people and hitting people with nightsticks, so I started taking pictures," said Queary. "I followed a young, black male as he was being accosted by five cops. As I tried to take a picture I was pushed away. I asked why I was pushed away and then the next thing you know I was being judo flipped."

Someone with a video camera documented John Farley's cell-mate Sam Queary being "judo-flipped" by NYPD and arrested as he was photographing others being arrested. The video, shot by an unknown citizen journalist, has been widely broadcast and linked to by media outlets around the world. The headline for this video was chosen by YouTube. Youtube/LibertyPlazaRev.

I also met Rosa A., 33, in the police van while we were being transported to the 1st Precinct for processing. She had been shopping at the Barnes and Noble on Union Square when she saw the protesters outside. As many New Yorkers do when they see something unusual, she snapped a picture. And she was arrested.

"I've never been arrested," said Rosa A., in visible pain from the plastic handcuffs. "I was just there looking at magazines." She laughed, lightening the mood in the police van. Even our arresting officer, in the van with us, chuckled.

Between when the Occupy Wall Street protests began on Sept. 17 and this weekend's wave of media coverage stemming from the arrests, the protesters have complained about being largely ignored by traditional media, including the major national and even metropolitan newspapers, the cable TV news channels and the local network news stations. Meanwhile, argue the protesters, similarly sized Tea Party demonstrations in recent years have received considerable coverage. The general consensus among the Occupy Wall Street protesters was that it was important to document constantly what is happening, and to present their own story when other media hasn't.

The protesters have also claimed that the media coverage they did receive painted them in an unflattering light and hasn't accurately represented them. Saturday's New York Time's article characterized the protesters as uninformed, mostly white hippies and trust-funded anti-capitalists. As a result, the protesters I spoke with were quite media savvy and conscious of their need to represent themselves in an attempt to legitimize their cause, which they've been doing on their website, on Twitter and on Youtube. In fact, they have an entire media team assembled at Zuccotti Park in Lower Manhattan, where about a dozen laptops are being powered by a portable generator, and citizen journalists are constantly uploading new footage.

The Occupy Wall Street demonstrators have been criticized, including in the aforementioned New York Times piece, as unorganized and lacking in any concrete goals, other than to raise awareness about economic corruption.

But as we all sat in a jail, I noticed an interesting thing happen.

People began to talk very seriously about organizing in a more cohesive way than they have been. Jailhouse rookies, who had never been arrested or involved in radical political activities, listened attentively as experienced activists spoke about the need to set clear demands in order to rally broader public support for specific outcomes.

I don't know what's going to happen to Occupy Wall Street as a movement. Maybe it will fizzle out, maybe it will grow. I do know that whatever happens will be documented. And I know that there's a history of activist movements being bolstered when leaders and followers alike are jailed together.

My cellmate Daniel Gross, a protester who volunteers as an organizer with the Industrial Workers of the World Union, helped create the first union for Starbucks employees.

"I think the NYPD is really going to try to spin what happened today," Gross told the group, as he handed out his contact information. "I think that we should organize our own press conference."

Around 10:30 p.m. the police began letting us leave our cell in groups of two. Before leaving, many traded contact information through smuggled business cards and contraband pens.

The still-jailed cheered the newly free.