Daily Caller won't back down from false EPA "scoop" 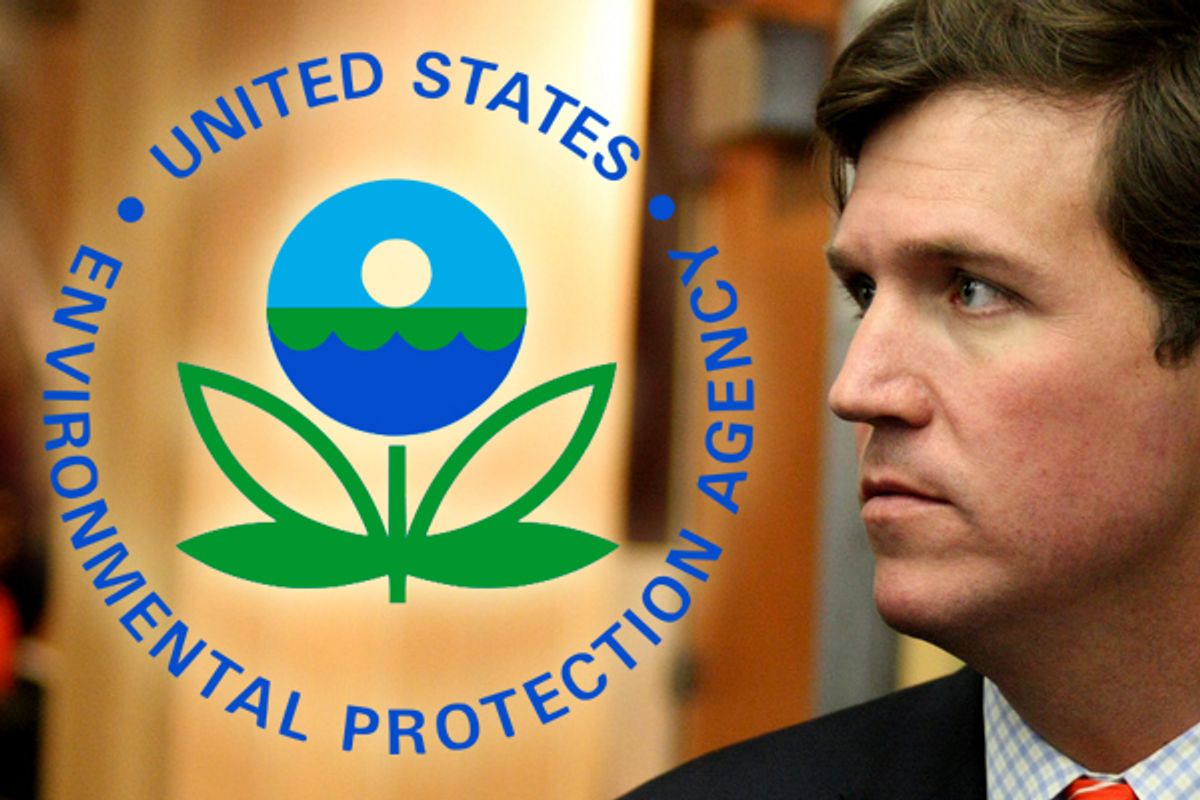 This week, Tucker Carlson's still-breathing Daily Caller news site published a blatantly false story about the EPA. The story was either wrong because somewhere there made a mistake or because the Caller intended to plant a false anti-EPA story knowing it'd garner a lot of attention and end up as a common conservative talking point, even though it was false. While the "mistake" option seemed the most likely answer at first, the Caller's executive editor now has me convinced that this was intentionally bad journalism.

The Caller claimed to have learned that the EPA was planning to hire "230,000 new bureaucrats — at a cost of $21 billion" to implement new greenhouse gas regulations. That was the scoop. $21 billion and 230,000 new EPA bureaucrats! That is false. It's based on a misreading of a Justice Department brief filed in the U.S. Court of Appeals DC circuit, which presents the "$21 billion" figure as an example of what the EPA would need to regulate emissions if the rule they're going to court to defend is blocked.

“Hiring the 230,000 full-time employees necessary to produce the 1.4 billion work hours required to address the actual increase in permitting functions would result in an increase in the Title V administration costs of $21 billion per year,” DOJ wrote.

DOJ adds that the tailoring rule is designed specifically to avoid that kind of scenario.

The EPA determined that phasing in the statutory limits would still allow most of the emission benefits “while avoiding the permit gridlock that unquestionably would result from the immediate application” of the thresholds laid out in the Clean Air Act, DOJ said in the brief.

Who is fighting this "tailoring rule"? The biggest industrial polluters, as Kate Sheppard explains. The tailoring rule means opening up the permitting process to the biggest emitters first, because otherwise the EPA would have to immediately begin regulating every greenhouse gas emitter in the country, which would be a bureaucratic disaster and insanely expensive. Again: This is what the EPA would like to avoid. Polluters want to block the rule in order to force the EPA to give up on this crazy idea of regulating greenhouse gas emissions entirely.

So the Caller read a DoJ brief incorrectly. It happens! Those things are written in legalese, who can understand any of it?

They admitted their screw-up and moved on, right? No. Instead, they continue to insist that they're right, and that the Obama administration purposefully and explicitly seeks to destroy American industry while bankrupting the nation by expanding the size of the EPA 13-fold and increasing its budget by $21 billion, and this secret plot was buried in a legal brief that they and they alone understand.

The Caller's executive editor, one David Martosko, writes an editor's note attacking all the Callers critics as left-wing pinkos and liars. "Despite the criticisms that some have offered," he writes, "we haven’t changed a word." It must be correct, then, because no one ever intentionally lies on the internet.

Martosko goes on to describe the filing with a marginally greater degree of accuracy, making this editorial something of a snide, defiant walk-back (a right-wing media special), but he insists on the opposite-day reading of the filing's argument that underpins the Caller's scoop, which was of course already latched onto by Fox and by anti-enviromental Republicans in Congress.

Dave Weigel charitably writes that Martosko "doesn't really know what the 'facts' are," but Weigel also notes where Martosko used to work: the "communications firm" Berman and Company, where he was, until this August, "senior strategist and director of research."

Berman and Company is quite objectively in the business of manufacturing misinformation. They don't just lobby politicians or send out press releases, they create front groups and spread specious pro-industry "research." Martosko's former job was to deceive journalists.

Any senior Berman and Company strategist would know how to take a document like this legal filing and argue that it says the opposite of what it says. They teach that on day one. (I would also not be shocked to learn that some of the polluters challenging the EPA in court are among Berman and Company's clients, but there's no way to know -- Berman generally makes sure his clients names appear no where near his work promoting their interests.)

Why would any organization supposedly dedicated to journalism hire a Berman and Company "strategist" as executive editor? If your political beliefs align, let him write a column every week or something, but someone for whom truth is a malleable resource to be bent in the service of promoting influential industry players is not really someone you want in charge of a newsroom.

Unless, of course, "winning" the stupid partisan argument is actually more important to you than reporting reality.