The Jewish mother I never thought I'd be

I believed that smothering, overprotective moms like mine just had boundary issues. Then I had kids of my own 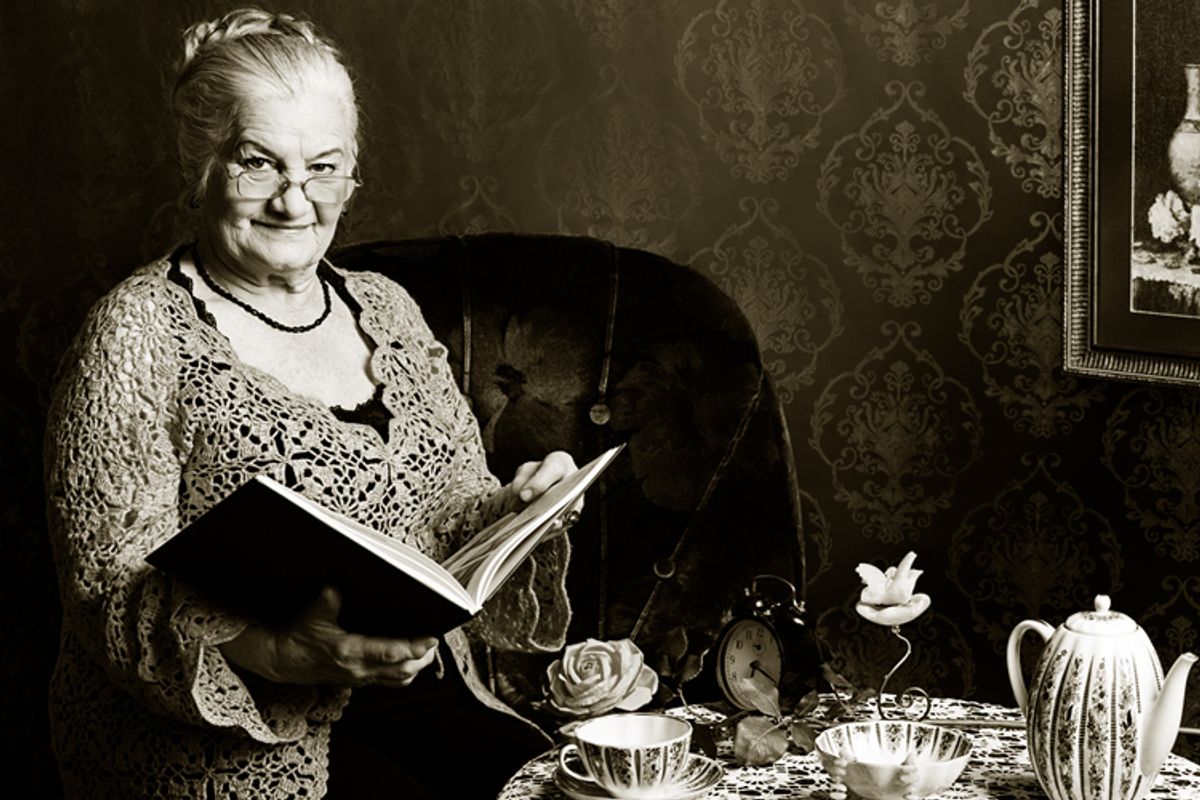 I always knew my mother was different, different from the other mothers in the way she dressed, the way she spoke, but most obviously, the way she mothered. I remember a slumber party where instead of a sleeping bag, she urged me to bring a small, inflatable mattress because the dust on the floor was liable to aggravate my allergies. I remember a little boy in a play group whom she threatened with physical harm after he pulled a chair out from under me. And I remember the nagging -- the questioning of whether or not I'd finished my homework, my college applications, my thank you notes, my chores -- the questions asked not once, not twice, not three times, but on so many separate occasions that the words began to feel as though they arose not from my mother's mouth but from some dark and tormented place inside my soul.

If I'd lived in the Jersey suburbs or Chicago's north shore, I might have recognized these qualities as the psychological price to be paid for all the benefits of having a loving, smothering, highly invested, over-involved Jewish mother. But because I lived in rural-suburban central Virginia where Jews were about as common as AFL-CIO leaflets, I didn't know what to make of her. I only knew that I loved her, and that she loved me, and that on a daily basis, she drove me absolutely, positively crazy. I am 33 years old, and sometimes she still drives me crazy. The difference now is that since the birth of my son and daughter, I have steadily, inexorably been creeping toward the realization that I, too, am a Jewish mother, that the uniquely Yiddish bouquet of neurosis and psychopathology is likely woven into the double helix of my DNA. Is there a support group for this? Are there interventions?

It seems to me the term "Jewish mother" has little do with Judaism or Jewishness itself, but rather describes a style of mothering that can be broken down into four distinct but inter-connected components: anxiety in all its guises (arising from the mother and transferred to the child with the efficacy of an intravenous transfusion); overprotectiveness; high, at times unreachable, expectations; and finally, the ability and willingness to inflict shame, guilt and self-martyrdom to shape a child's (and in this case "child" could mean 40-year-old man's) character and moral worth.

Now my children aren't yet preschool age, so I've really only had experience with the first two components, anxiety and overprotectiveness. But, boy, have these experiences been illuminating. Let's begin with anxiety, which is really the beginning and the end, the alpha and omega of the Jewish mother paradigm.

My first moment as a Jewish mother came not when my son was born, but a few months later when he had his first upper-respiratory infection. I was sleeping heavily after several nights of mucus-suctioning and nebulizing treatments, sleeping the sleep of the dead, and all at once, though he was not crying or coughing, though he had not uttered a peep, my eyes flicked open, and I shot up in bed. How was he? Was everything going to be OK? Was he wheezing? Was he going to get pneumonia? Was the pediatrician we'd chosen really the best one in town? How was the humidity in his room? Why hadn't I bought one of those grocery-store cart germ cover thingies? The questions went on and on. The anxiety was a real, physical thing inside me. It had a weight, a color, a texture. It wouldn't let up; it demanded to be answered or fed or reassured back to sleep. Only there was no real reassurance it would accept, no permanent soothing. For the first time I understood what a relative had once told me: "A Jewish mother is only as happy as her unhappiest child." At the time, I had scoffed and thought, "Please. It's called boundaries. It's called having your own identity and sense of self. It's called getting a grip." Now I feel as though the adage has come back to haunt (or nag) me.

I've harassed pediatricians and nurses, demanded extra conferences with preschool teachers, contacted speech therapists and occupational therapists over delays other mothers probably wouldn't have noticed, stressed over magnet school applications three years before they're due. I've found it difficult to restrain myself from grabbing a playground bully by the arms and giving him a good shaking. I've written out itineraries for baby sitters with years of experience. I've gotten up in the middle of the night and stood over my children's sleeping bodies just to make sure they're breathing, and breathing well. In short, I'm the worst Jewish mother in the world. I make Alexander Portnoy's mother look like a laid-back Earth mama.

When I reveal these peculiar behaviors and fixations to other "Jewish mothers," especially those to whom I related, they nod and press their lips together and give me a look that seems to say, "Is there anything you've forgotten? Is there anything else you should perhaps be worrying about?" There's nothing Jewish mothers love more than out-Jewish-mothering other Jewish mothers. I remember emailing my mother a picture of my 1-year-old daughter standing happily on the beach. The reply came back almost instantly via text message: "No shoes? Aren't her little feet going to burn?"

I remember other conversations with my mother-in-law that went something like this:

Mother-in-law: How are you? What are you up to today?

Me: Oh, just finishing up some work. Not gonna pick the baby up at daycare until 4 today."

Me: Maybe I'll just go get him now.

When I tell this to my own mother over the phone, I can almost hear her smile. "Ah," she says. "Now you see. Little Miss You-did-this-wrong-you-did-that-wrong understands."

Kind of, I do. But that doesn't mean I have to accept it. I start thinking that surely if I better understood the origins of this Jewish mother mentality I could somehow tame it. And about a year ago, I came close.

My son had just recovered from a tonsillectomy. It was an awful surgery, and in my despair I began googling "tonsillectomy recovery" and stumbled across an article in Tablet about Lower East Side moms in 1906 who rioted after a principal at P.S. 100 arranged for doctors from Mount Sinai to come to the school and perform tonsillectomies on kids with chronic tonsillitis. Apparently, having heard rumors that uptown doctors were being dispatched to the school to "cut the throats of Jewish children," a throng of mothers descended on the school. The article describes how, "greeted by locked doors, the screaming throngs surrounded the schools and began smashing windows and pounding on doors. On Essex Street, some white-hot mothers clambered up ladders in an attempt to break into P.S. 137 through the second-floor windows."

At last, I thought, some Jewish mothers who make me look calm and reasonable. But of course, this happened in 1906 and many of these Jewish mothers, poor immigrants from Eastern Europe, had come from places where horrible, unfathomable acts were committed on Jewish children, not to mention Jewish parents, Jewish men and women, Jewish anybody -- see Kishinev pogroms of 1903 -- a massacre where the New York Times described "babies ... literally torn to pieces by the frenzied and blood-thirsty mob."

What's the worst that could happen? The terrible truth is that it probably already has.

I know what you're thinking. I can see the hate letters coming in already: Generalized Anxiety Disorder, anyone? She clearly needs to relax, have a drink, go on a vacation. I couldn't argue with any of this. And I'm sure others will point out how there are plenty of "Jewish mothers" who aren't even Jewish, just as Amy Chua pointed out in her controversial essay how not all Asian mothers are "tiger mothers," and not all "tiger mothers" are Asian. People will argue that culture or ethnicity is beside the point. Maybe, but I for one couldn't help wondering when I read Chua's essay if the people who were so offended by the exaltation of the tiger mother (or the ones who will surely be offended by the notion of a stereotypical "Jewish mother") are in reality put off more by style than substance.

I mean, don't all mothers basically want their children to succeed, to excel, to be healthy and safe, to be valued and appreciated or admired by a worthwhile community, to prosper greatly and to suffer little? I believe nearly all mothers would like these things; what differs is the resources at their disposal to achieve them and the cultural tools (pride, shame, guilt, tradition) they employ toward their end.

What an awful burden we mothers and fathers, Jewish and not, have to bear -- to hatch a thing we love more than ourselves into a world so fundamentally unworthy. I'm reminded of Grace Paley's exquisitely beautiful story about an old Jewish lady watching two young fathers out her window -- aptly titled, "Anxiety."

And I'm reminded of an interview in which Philip Roth recounted how after the publication of "Portnoy's Complaint," a reporter asked his mother if she considered herself a "Jewish mother." He told how she gave an answer "worthy of Pascal," replying simply, "All mothers are Jewish mothers."

It has to be true. How could it be otherwise?