When the president gets tough, the tough start whining 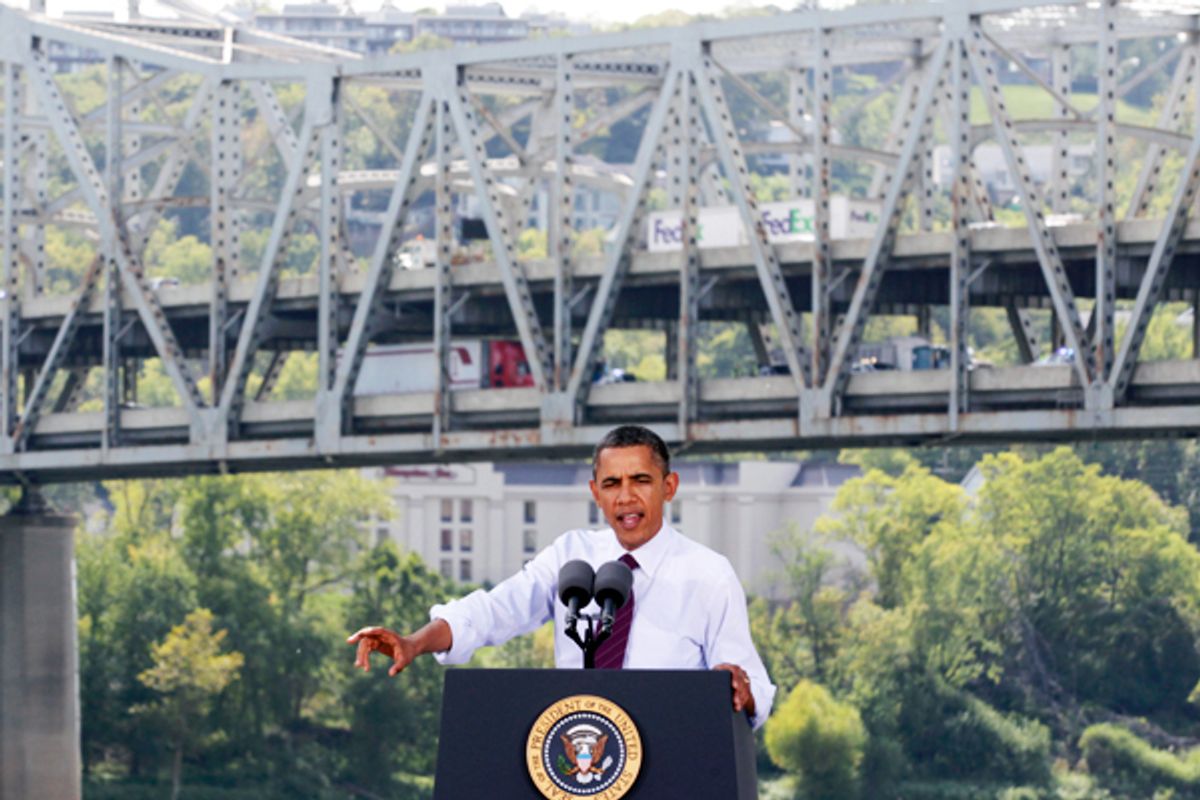 President Obama speaks in front of the dilapidated Brent Spence Bridge during a visit to Cincinnati on Sept. 22. (Reuters/John Sommers II)
--

This just in: Not all the fools are Republicans. Recently, one Melissa Harris-Perry, a Tulane professor who moonlights on MSNBC political talk shows, wrote an article for the Nation titled "Black President, Double Standard: Why White Liberals Are Abandoning Obama."

See, nobody ever criticized Bill Clinton, another centrist Democrat who faced a hostile Republican congress. Indeed, he was "enthusiastically re-elected" in 1996. Therefore, "[t]he 2012 election is a test of whether Obama will be held to standards never before imposed on an incumbent. If he is, it may be possible to read that result as the triumph of a more subtle form of racism."

The professor actually wrote that. See, certain academics are prone to an odd fundamentalism of the subject of race. Because President Obama is black, under the stern gaze of professor Harris-Perry, nothing else about him matters. Not killing Osama bin Laden, not 9 percent unemployment, only blackness.

The sheer political stupidity of turning Obama's reelection into a racial referendum cannot be overstated. It would be an open confession of weakness. Whatever its shortcomings, this White House is too smart to go there. Harris-Perry will have to fight this lonely battle on her own. Voters can't be shamed or intimidated into supporting this president or any other. They can only be persuaded.

And with the U.S. economy stagnating, they're going to need lots of persuading. Which is why the good news is that Obama has actually started talking like a Democrat again. It's hard to think of a recent political event more effective than the president's appearance in Rep. John Boehner's district last week. Over Obama's shoulder loomed the rust-pocked, visibly decaying superstructure of the I-75 Bridge linking Kentucky and Ohio.

You didn't need to be a civil engineer to recognize that to cross the Ohio River is to take your life in your hands. (Indeed a crack in a critical load-bearing element forced Indiana's Republican Gov. Mitch Daniels to close the I-64 Bridge linking Kentucky and Indiana only weeks ago.) Without major repairs, that bridge is fixing to just drop in the river one day.

Speaking in support of his American Jobs Act, Obama pulled no punches. He called out two GOP antagonists by name.

"The bridge behind us happens to connect the state that is home to the speaker of the House, with the home state of the Republican leader in the Senate," Obama said. "Mr. Boehner and Mr. McConnell, those are the two most powerful Republicans in government. They can either kill this jobs bill, or they can help pass this jobs bill ...

It was dynamite TV. McConnell clearly didn't like it. The Kentucky senator grumped that fixing a bridge was one thing; Obama's jobs bill another. But he also voted with Democrats to avert yet another threatened government shutdown, due to the GOP's morally incomprehensible demand that disaster relief funds be held hostage to budget cuts elsewhere. If McConnell were a quarterback, you'd say he heard footsteps.

So what'll it be, America? Help out Vermont dairy farmers, rebuild Joplin, and Tuscaloosa, or top off Scrooge McDuck's bullion tank? Your call.

Obama also took on the Republicans' familiar "class warfare" nonsense. "If asking a billionaire to pay the same tax rate as a janitor makes me a warrior for the working class," he said "I wear that with a badge of honor."

It's an understatement to say that this Barack Obama has been missing in action since 2008. Beltway pundits who value drawing room manners were aghast. To the Washington Post's Charles Krauthammer, such rhetoric makes Obama "a leveler, a committed social democrat, a staunch believer in the redistributionist state."

Too bad we can't make Krauthammer drive that bridge every day.

A recent Gallup poll, however, shows that voters are ready to invest in America, build things, and put people back to work. Support for the elements of Obama's jobs plan averages better than 2-to-1. Americans favor public works like the I-75 bridge, for example, by 72 to 27 percent. Even 50 percent of Republicans are down with that.

That's the President Obama Americans voted for, and the only one they're apt to vote for again.