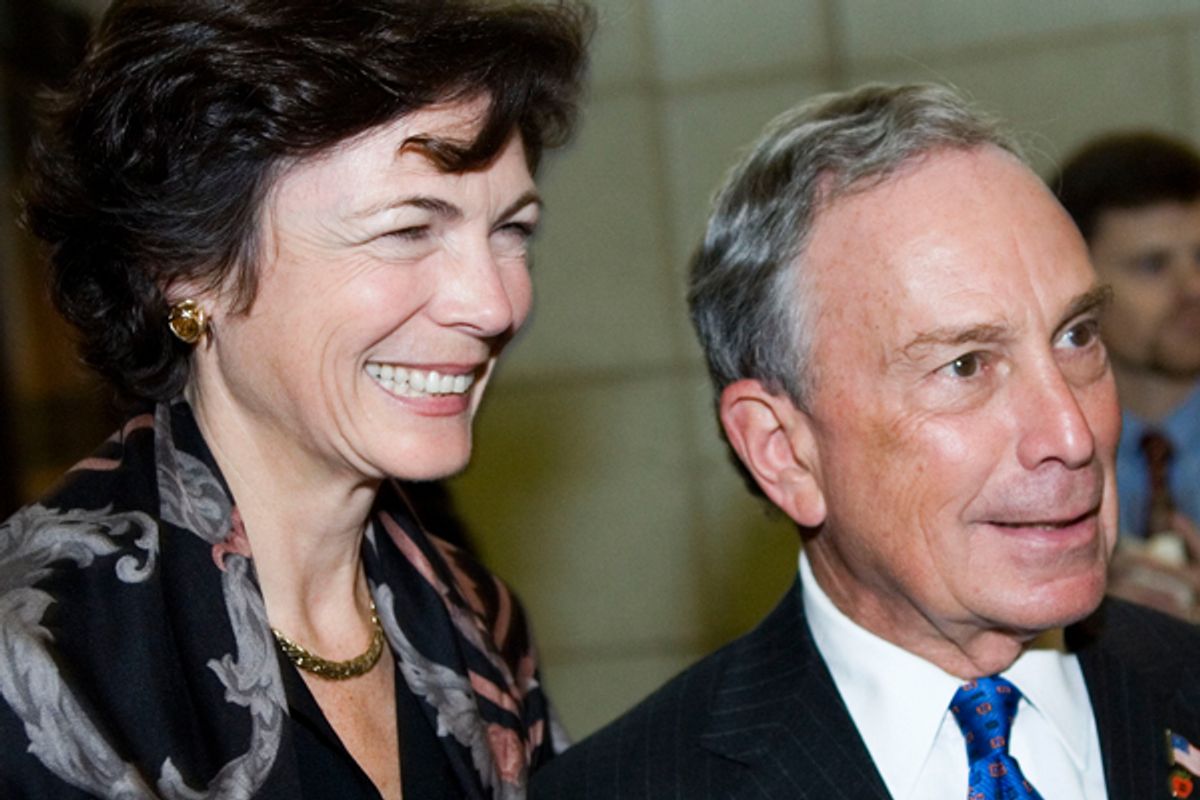 The 90,000 New Yorkers who control 99% of the city's wealth are completely segregated, geographically and intellectually, from everyone else in the city and the nation at large, so its no surprise that they tend to be tone-deaf and blind to the inequities and frustrations and resentments of Regular Folk, but billionaire Mayor Michael Bloomberg and his charming and powerful partner Diana Taylor are really out-doing themselves in terms of blinkered elite thickheadedness these days.

Let's start with Mayor Michael Bloomberg, who is at the moment clearly struggling with his natural impulse to throw every protester in jail without charges for the crime in interrupting the business of the city's truly important people. His impassioned plea to the people currently participating in the Occupy Wall Street protest: The banks are our friends!

“The protesters are protesting against people who make $40-50,000 a year and are struggling to make ends meet. That’s the bottom line,” Bloomberg said, presumably meaning service workers on Wall Street, adding that “we all” share blame for taking on too much risk, not just the financial industry.

“And people in this day and age need support for their employers. If the banks don’t go out and make loans we will not come out of our economic problems, we will not have jobs so anything we can do that’s responsible to help the banks do that is what we need.”

Wonkette's Kirsten Boyd Johnson correctly notes that every single word the mayor says here is utterly nonsensical, unless you are, say, a billionaire mogul with deep ties to the financial industry.

Everyone else knows that the banks exist to make huge amounts of money by screwing everyone over, but banks are generally run by human beings (with the exception of Goldman Sachs, a Lizard Person From Outer Space operation), and those human beings have largely convinced themselves that they are very good and productive members of society. Hence, this sort of talk.

Which working-class people making $50,000 a year are the protesters protesting against, exactly? I'm not sure. The people who clean the offices of the financial firms that are actually being protested, maybe? The people who sell them fancy coffees? (This is just a slightly confused version of the old hostage argument against attacking the pillars of the vast, corrupt financial industry -- if you hurt the banks they'll hurt everyone else in America in retaliation.)

Still, Mayor Mike is to be commended for his political acumen. Desperate, terrified fealty to "employers" is a great, inspiring message. That should be his independent presidential campaign slogan. "SUPPORT YOUR BETTERS, OR ELSE."

Diana Taylor, the mayor's partner (in a personal/romantic sense, not in terms of business), gives an interview to Elizabeth Spiers, the editor of the New York Observer, boy real estate magnate Jared Kushner's newspaper of record for New York's media and real estate elite. Taylor manages to be less astoundingly dense as the mayor, but she still illuminates the mindset of the Gotham's ruling class.

They hate democracy, or at least they hate the decisions made by voters (and who among us doesn't, much of the time), but she is positive that everyone would see the light and support people like her (or her, specifically) if only those damned left-wing nuts and right-wing nuts who control the political parties hadn't rigged the whole system.

Here's the classic "I WOULDA WON IF I WANTED TO!" cry of the elite centrist who declines to messy themselves with an actual run for office, after flirting with the idea:

Last year, Senate Republicans approached Ms. Taylor about the possibility of running against incumbent Senator Kirsten Gillibrand, and for a while she considered it. “The Senate Republicans basically asked me to run and I thought about it, talked to a lot of people,” she said. “But then when I really thought about it, what attracted me to the idea was the race because I knew I could win that race. It was the thought of actually having to go and do that job, that was really not all that appealing.”

I bet Taylor would've been just as successful as her handpicked ridiculous Congressional challenger to Rep. Carolyn Maloney, the hilarious Reshma Saujani.

Taylor explicitly defines herself in the traditional "centrist" way: socially liberal (she is pro-choice!) and "fiscally conservative" (she is pro-corporatist!). Contrary to popular belief, this is basically the opposite of how "most Americans" -- especially genuine swing voters -- actually feel. (To drastically oversimplify, your generic "swing voter" is uncomfortable with changing social mores and thinks the government should soak the rich to pay for regular folks' schools and healthcare, basically.)

She was even less sanguine about Obama. “I think that he’s a very intelligent man,” she said carefully. “And he has a lot to learn.”

Her voice took on a sharper edge. “For somebody’s who’s going to come in and be the great unifier—you know, that hopey-changey stuff—it hasn’t worked very well. The country is more divided now than it’s ever been. And he doesn’t appreciate other people and what they do. “

He doesn't... "appreciate other people." If only he knew how much the world's top 1% had done for him!

Having given this some thought, she had a three-pronged list of his biggest mistakes. “There are probably more,” she said, but here were three. He wasn’t supporting business, Ms. Taylor said. “He should be a champion for this country and he’s not. Because that’s where the jobs are going to come from. They’re not going to come from government; they’re going to come from the private sector.” The second: Obamacare. He basically told Congress, ‘you know what? I want a health care bill, do something.”

“The last time I checked, the president was supposed to sit down and figure out what he wanted and then get Congress to go along with it. And we got a mess. And exactly the same thing with financial regulation and regulatory reform.” This was number three. “And we have a mess.”

This boilerplate center-right political analysis is self-evidently stupid to anyone who's been paying attention to the legislative process over the last, say, 20 years (it is the "magic president" school of analysis) but it is always useful to understand how our betters think about the world. In Diana Taylor's mind, the unemployment crisis is a result of... Barack Obama being insufficiently respectful of business, or somehow not "championing" business. The jobs will come from the private sector, once... Obama thanks them, profusely, for their goodness.

Next: Barack Obama mistakenly allowed Congress to craft legislation, a clear violation of the Constitution, which holds that Congress should sign or veto bills sent to it by the president. That's what the Constitution says, right? I seem to have misplaced by pocket copy.

"The last time I checked, the president was supposed to sit down and figure out what he wanted and then get Congress to go along with it." What a wonderful line! The last time you checked what, Ms. Taylor? Your email? "Doonesbury"? The Thursday Styles section?

Taylor goes on to decry "uncertainty," claiming Dodd-Frank is somehow stopping banks from lending money to people who need money, and throws in this exasperated cry to the heavens:

“And this whole business of the FHFA suing all the banks around Fannie and Freddie; it’s crazy!” Inasmuch as Mr. Taylor would ever be inclined to pound her fist on a table to make a point, she seemed on the verge of it. “I’ve never—I mean, it just makes no sense at all to me!”

They're suing the banks because the banks committed mass fraud, basically? It's pretty easy to understand! (And don't worry, they'll let your bank friends off easy, probably.)

But Taylor doesn't blame the banks for what the banks did. No, she places the blame where her class knows it belongs: On All of Us.

Everybody! Did you know that you, citizen, are responsible for the financial disaster and the ensuing mass unemployment crisis? You should probably call up Diana Taylor and apologize personally. You are making her so upset!