On Wednesday, we asked which books you think kids should never have to read in school. Here's what you said 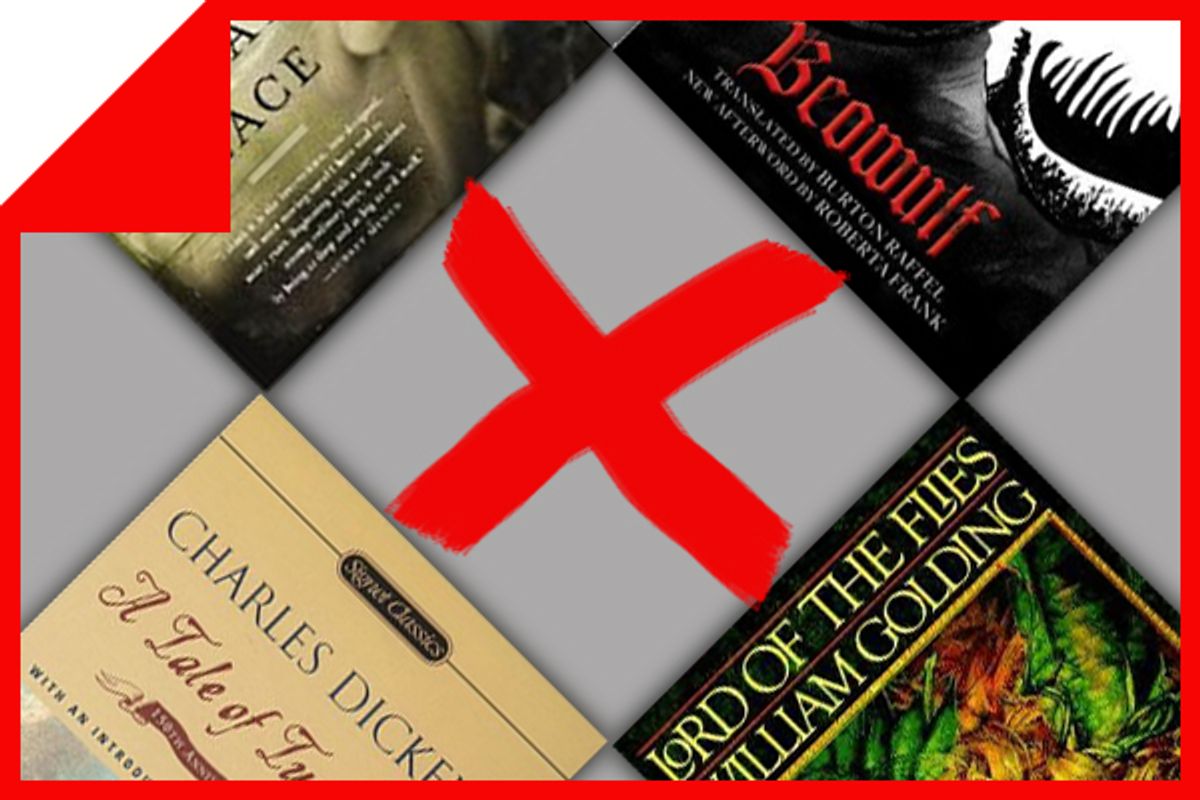 Earlier this week, Laura Miller and other Salon writers weighed in on books they'd like to see banned from school reading lists -- from "Lord of the Flies" ("Is it pure sadism [that makes teachers assign that book]?" asked Andrew O'Hehir) to "Ivanhoe," which went a fair way toward dulling Life editor Sarah Hepola's enthusiasm for high school English.

Laura also asked readers to weigh in on their least favorite books from their school days, and you were quick to volunteer (there are nearly 200 comments on the article so far).

So, which books won't we be finding on your grown-up bookshelves, with 8th-grade annotations and yellowed endpapers lovingly preserved?

Well, for one thing, some of you really, really don't like "Ethan Frome." In your eyes, it's not just "tedious." It's also "bleak," "depressing" and "insufferable" enough to "[crush] your soul." And if anything, "Silas Marner" is even more unpopular; one commenter quipped that it ought to be "hurled into the Mariana Trench."

Other volumes less than dear to (some of) your hearts include "Moby-Dick," Edith Hamilton's "Mythology," "The Scarlet Letter," "Jane Eyre," "Invisible Man," "The Catcher in the Rye," "Paradise Lost," "Heart of Darkness," "Little Women," "Gone with the Wind," "Portrait of a Lady," "Crime and Punishment" ("It took 10 years and a degree in computer science before I'd exorcised my demons and picked up anything deeper than a Robert Ludlum novel," one of you wrote) and "Great Expectations." And suffice it to say that, were he still alive, John Steinbeck would be unlikely to find himself in your collective debt.

Why did you find these books so annoying? Complaints about length ("'Crime and Punishment' might possibly have made for a great 12-page short story"), inscrutable vocabulary ("Brave New World") and age-inappropriate plot points were numerous. But many also made the argument that it wasn't always a book itself (however challenging) that was the problem; in many cases, it was the quality -- or lack -- of accompanying instruction.

Where strength of teaching was concerned, a lot seemed to come down to a teacher's efforts to provide historical context. Is it useful to assign "Animal Farm" to students who have yet to deal with the relevant Soviet backstory? Why try "Tess of the D'Urbervilles" if you're not going to give it the explanation it deserves? (Wrote one reader, "Thomas Hardy may have meant ["Tess"] to be a story about 19th-century double standards, but since it is impossible to have a discussion about female sexuality in a high school English class that would put the book in context for the student readers, it came off as an unpalatable cross between a bodice ripper and a cautionary tale. Until our society evolves to the point where the instructors can teach the book properly, I wish they'd stop teaching it at all!") Just "study some history," one commenter concluded, "and Melville, Dickens and Steinbeck come alive."

Of course, the Bard had a corner of the debate all to himself. "Shakespeare should be read aloud," or seen in performance, instead of -- or at least in addition to -- being read in print: this was a common refrain. "Why, why, why do educators insist on using 'Romeo and Juliet' as the introductory play?" one reader asked plaintively. "I think they'd have better luck with one of the comedies" -- perhaps "The Comedy of Errors." And though some bemoaned the difficulty of Shakespeare's English, suggesting it might not be worthwhile for classes to slave over outdated Elizabethan jibes, at least one of you wouldn't stand for that line of thinking, hitting back: "If you don't appreciate Shakespeare, then you are dull, tone-deaf, rhythmically challenged and know nothing about the English language or human life."

Rather unsurprisingly, no one stepped up to defend the required reading of "Finnegans Wake," which one of you was inexplicably forced to endure as a student. Perhaps jared2 will take comfort in the words of a contemporary reviewer of the tome, who wrote: "The work is not written in English, or in any other language, as language is commonly known. ... [James Joyce] alone could explain his book and, I suppose, he alone review it."

Lastly, some of those who weighed in were not only former English students, but also current English teachers; their points added a stimulating dose of the practical. Morning's Minion noted that any tale disturbing enough to merit inclusion in a reader's list of ban-able books had clearly "registered on a pretty profound level" -- and argued that books whose rewards are not immediately apparent should not necessarily be written off:

I have long been of the opinion that the only real crime in teaching is diluting the curriculum and lowering expectations for what students can achieve. I've written about this before on teaching threads, but when you set the bar high, students reach for it; not all touch it, but their hands are high, and energy, effort, and passion go into the endeavor. When you set it low, they know it, trip over it, and resent you like hell for underestimating them.

My rule of thumb is to choose literature that I love and am excited about when I can, and attempt to teach required texts thematically, or in context. My personal preference would be to develop blended courses that combine literature, history, government, and philosophy. "The Scarlet Letter" becomes much more interesting when students examine it in the context of America's original and ongoing "culture wars;" "Lord of the Flies" could be very revealing when compared to rosier versions of childhood "innocence," or discussed in the context of competing theories of human nature.

Besides, no matter what we choose to teach in English class, someone's going to complain. So, if all else fails, teach the controversy. No matter what their reading [comprehension] scores, I've never met a student who didn't have strong opinions, and who didn't appreciate having a chance to express them.