The creative class is a lie

The dream of a laptop-powered "knowledge class" is dead. The media is melting. Blame the economy -- and the Web 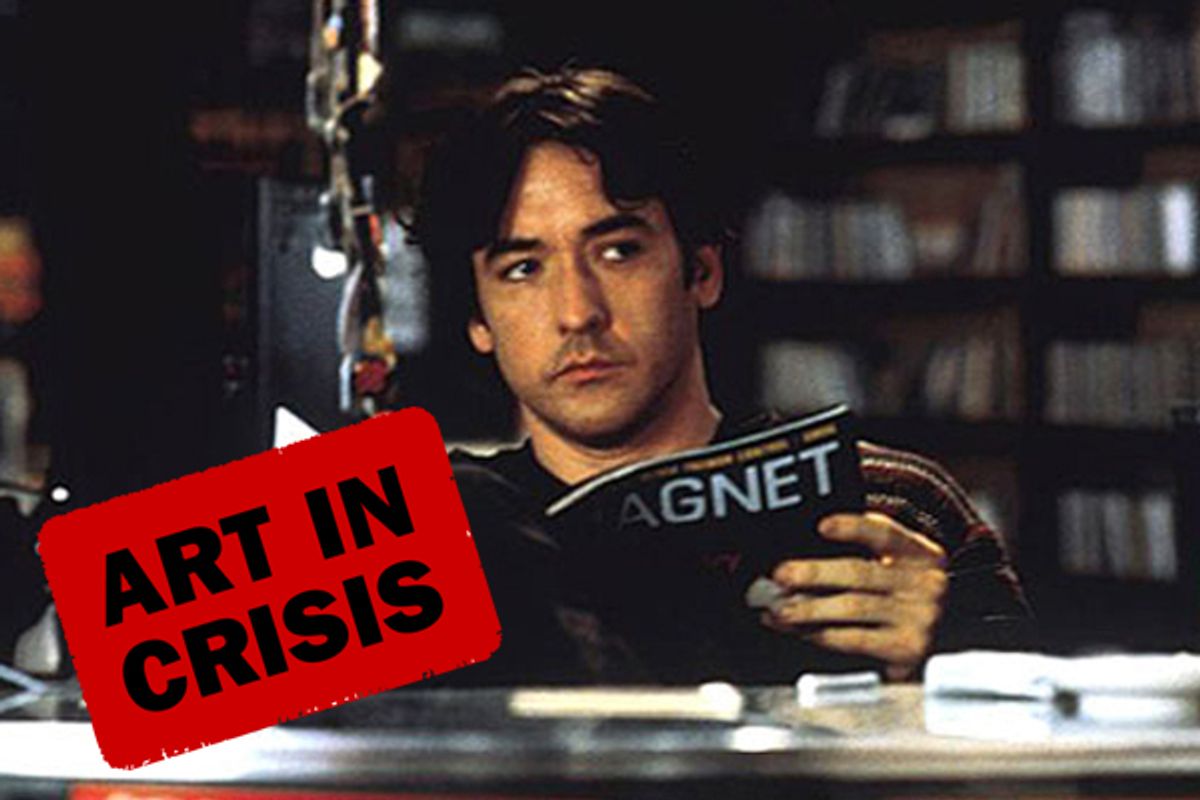 Someday, there will be a snappy acronym for the period we're living though, but right now -- three years after the crash of 2008 -- American life is a blurry, scratched-out page that's hard to read. Some Americans have recovered, or at least stabilized, from the Great Recession. Corporate profits are at record levels, and it's not just oil companies who are flush.

For many computer programmers, corporate executives who oversee social media, and some others who fit the definition of the "creative class" -- a term that dates back to the mid-'90s but was given currency early last decade by urbanist/historian Richard Florida -- things are good. The creativity of video games is subsidized by government research grants; high tech is booming. This creative class was supposed to be the new engine of the United States economy, post-industrial age, and as the educated, laptop-wielding cohort grew, the U.S. was going to grow with it.

But for those who deal with ideas, culture and creativity at street level -- the working- or middle-classes within the creative class -- things are less cheery. Book editors, journalists, video store clerks, musicians, novelists without tenure -- they're among the many groups struggling through the dreary combination of economic slump and Internet reset. The creative class is melting, and the story is largely untold.

It's happening at all levels, small and large. Record shops and independent bookstores close at a steady clip; newspapers and magazines announce new waves of layoffs. Tower Records crashed in 2006, costing 3,000 jobs. This summer's bankruptcy of Borders Books -- almost 700 stores closed, putting roughly 11,000 people out of work -- is the most tangible and recent example. One of the last video rental shops in Los Angeles -- Rocket Video -- just announced that it will close at the end of the month.

On a grand scale, some 260,000 jobs have been lost in traditional publishing since 2007, according to U.S. News and World Report. In newspapers alone, the website Newspaperlayoffs.com has tracked some 40,000 job cuts since 2008.

Some of these employees are young people killing time behind a counter; it's hard for them, but they will live to fight again. But education, talent and experience -- criteria that help define Florida's creative class, making these supposedly valued workers the equivalent of testosterone injections for cities -- does not guarantee that a "knowledge worker" can make a real living these days.

"It's sort of like job growth in Texas," says Joe Donnelly, a former deputy editor at L.A. Weekly, laid off in 2008 and now pouring savings and the money he made from a home sale into a literary magazine. "Gov. Perry created thousands of jobs, but they're all at McDonald's. Now everyone has a chance to make 15 cents. People are just pecking, hunting, scratching the dirt for freelance work. Living week to week, month to month."

Past groups punctured by economic and technological change have been woven into myth. Charles Dickens wrote sympathetically about Londoners struggling through the Industrial Revolution of 19th-century Britain. John Steinbeck brought Dust Bowl refugees to life; Woody Guthrie wrote songs about these and others with no home in this world anymore. One of his inheritors, Bruce Springsteen, did the same for the declining industrial economy.

But the human cost of this latest economic/technological shift has been ignored. Many of us, says Northern California writer Jaime O'Neill, are living in a depression. "It's hard to make the word stick, however, because we haven't developed the iconography yet, he writes in a recent essay titled "Where's today's Dorothea Lange."

A fading creative class -- experiencing real pain but less likely to end up in homeless shelters, at least so far, than the very poor -- may not offer sufficient drama for novelists, songwriters or photographers.

But journalists themselves have also ignored the human story all around them. In fact, the media -- businesses that have been decimated by the Internet and corporate consolidation -- have been reticent at telling the tale of this erosion. Good newspapers offer responsible coverage of the mortgage meltdown and the political wars over taxes and the deficit. But it's easier to find a story about a plucky worker who's risen from layoff to an inspiring Plan B than it is the more typical stories: People who lose their livelihood, their homes, their marriages, their children's schooling because of the hollowing-out of the creative class and the shredded social safety net. Meanwhile, luxury coverage of homes, fashions, watches and wine continue to be a big part of magazines and newspapers.

Optimists like Florida are undoubtedly right about something: This country doesn't make things anymore and never will. What the United States produces now is culture and ideas. Trouble is, making a living doing this has never been harder.

Wait a minute, says Allison Glock, a magazine journalist and writer who's just returned to her native South because she and her novelist husband could no longer afford life in New York. "Wasn't the Internet supposed to bring this class into being?"

Much of the writing about the new economy of the 21st century, and the Internet in particular, has had a tone somewhere between cheerleading and utopian. One of the Net's consummate optimists is Chris Anderson, whose book "The Long Tail: Why the Future of Business is Selling More," championed the Internet's "unlimited and unfiltered access to culture and contents of all sort, from the mainstream to the farthest fringe of the underground." With our cell phones, MP3s and TiVos, we're not stuck watching "Gilligan's Island" over and over again, he writes. Now we can groove to manga and "connect" through multiplayer video games.

Of course, it's not all about the Internet: David Brooks' influential "Bobos in Paradise: The New Upper Class and How They Got There" traced a multi-ethnic, meritocratic elite and a fantasia of latte shops, retro-hip consumers and artisanal cheese stores. The cheese stores are, in some cases, still there, but much of what Brooks predicted has fallen through. He wrote -- in 2000 -- that we were living "just after an age of transition," with the culture wars dead, a "peaceful middle ground" politically and a nation improved by the efforts of a class that had reconciled the bourgeois ethos with bohemianism.

This was easier to understand when things seemed to be humming along. But even after the 2008 crash -- with unemployment at 12 percent and above in California, which, thanks to Hollywood and Silicon Valley, is also the state most driven by the creative class -- blind optimism continues.

In 2009, Anderson came out with the intelligently argued "Free: The Future of a Radical Price," which suggested that new revenue streams and the low cost of computer bits meant that both businesses and consumers would benefit as the Internet drove down prices. It's nice to contemplate, but the human cost of "Free" becomes clear every day a publisher lays off staff or a record store closes.

Richard Florida helped set much of the agenda with his 2002 book "The Rise of the Creative Class," which argued that this class would make cities rich in "technology, talent and tolerance" and jolt them back to life. His latest book, "The Great Reset: How New Ways of Living and Working Drive Post-Crash Prosperity," wrestles with the difficulty of the last few years. But it continues to put faith in knowledge workers and the places they settle to bounce back stronger than ever.

The new economy "is good for whoever owns the computer server," says Jaron Lanier, a virtual-reality pioneer and author of "You Are Not a Gadget," which debunks a lot of Internet hype. "So there's a new class of elites close to the master server. Sometimes they're social network sites, other times they're hedge funds, or insurance companies --other times they're a store like the Apple Store."

Andrew Keen is another Silicon Valley insider who's seen the dangers of the Net. "Certainly it's made a small group of technologists very wealthy," he says. "Especially people who've learned how to manipulate data. Google, YouTube, a few of the bloggers connected to big brands. And the social media aristocracy --LinkedIn, Facebook."

Keen's book, "The Cult of the Amateur," looks at the way the supposedly democratizing force of the Net and its unpaid enthusiasts has put actual professionals out of work. It's not just the Web, he says, or its open-content phase, but a larger cultural and economic shift. "We live in an age where more and more people think they have a book in them," he says. "Or a film in them, or a song in them. But it's harder and harder to make a living at these things."

And when Google is used as an excuse to fire the librarian, or "free" access to information causes circulation to drop and newspapers to lay off staff, the culture pays a very real price.

So as these people lose their jobs, where are they going? The book/record/video store clerk is not only a kind of low-paid curator, but these jobs have long served as an apprenticeship for artists such as Patti Smith, Quentin Tarantino, R.E.M.'s Peter Buck or Jonathan Lethem.

Donnelly, who co-edits the Los Angeles literary magazine Slake, has watched numerous friends leave writing, art and acting. "I've seen a lot of people go into marketing -- or help companies who want to be 'cool.' What artists do now is help brands build an identity. They end up styling or set decorating. That's where we're at now."

The hard times and frustration are not confined to writers: Eric Levin is a kind of creative class entrepreneur: He owns Aurora Coffee -- two cafes in Atlanta that employ artists and musicians as baristas, and the Little Five Points record shop Criminal Records, which, after 20 years, has just announced that it will close. (There are local efforts underway to try to save it.) When asked if he knows anyone who's hurting, he replies, "Everybody I know." And he emphasizes that independent business people are in the same boat with writers and musicians.

"Main Street U.S.A. is suffering," he says. "If you like big-box retailers --they're winning. Corporations are winning."

The arts -- and indeed, narratives of all kind -- can capture a time, a place and a culture, and the inner and outer lives of its people. "But the tale of our times," O'Neill wrote in his piece on the silence of the new depression, "is mostly being told by our unwillingness to tell it."

Over the next few months, Salon will look periodically at the hollowing out of the creative class -- its origins, its erosion, the price of "free," and offer possible solutions and reasons for hope.

Is it a recession, a transition, a reset, or all of the above? "I think we're nowhere," says Donnelly. "We're in a no man's land."