The girl I stole from my best friend

For decades, I carried around the guilt of my betrayal. But when Russ and I met again, I realized I had it wrong 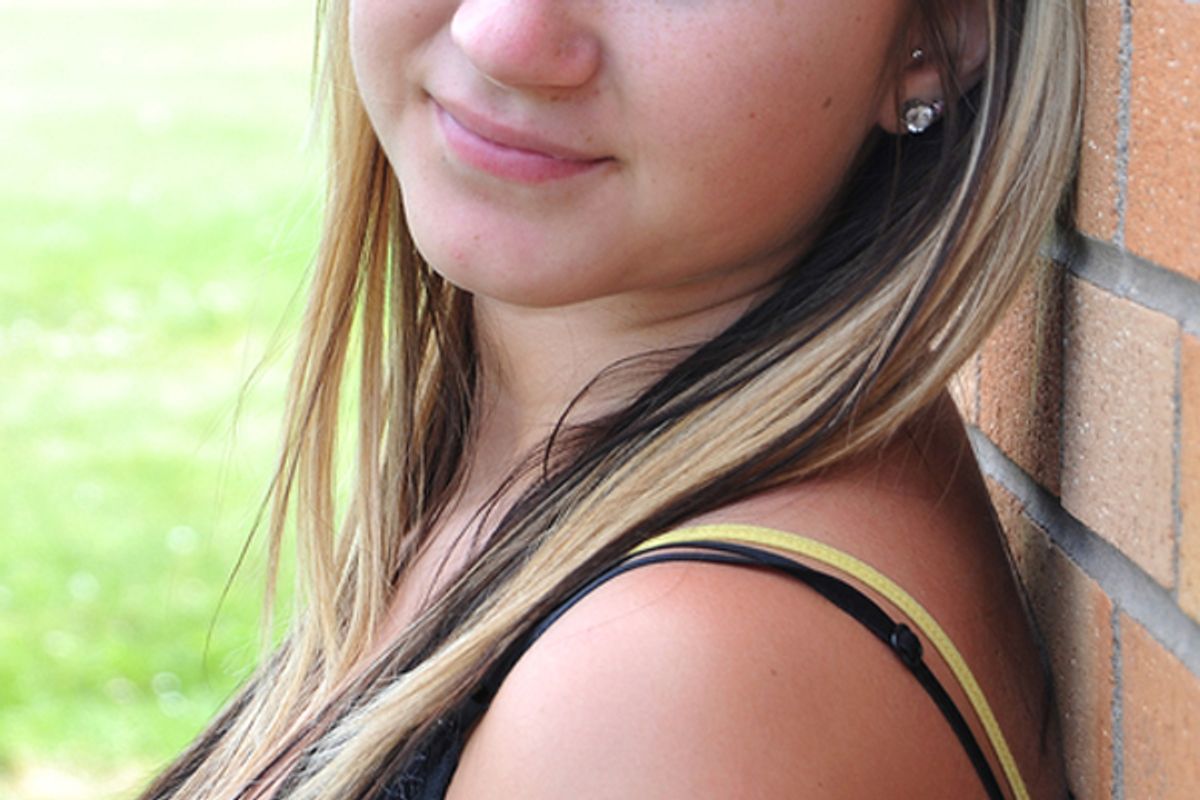 When I was a shy teenager trudging through the rabbit warren that is adolescence, I had no girl. Sure, I lusted after a string of field hockey players and drama club gals and prom queen types. But I was speechless. Passing them in the halls, my eyes bored through their tight pink polo shirts, as if my X-ray vision could read operating instructions scrawled on their chests. My lips were mute. No word combinations that approached anything close to "Would you" ... "like to" ... "go to a movie?" ever escaped my lips. I had no idea what language girls spoke.

Yet, miraculously, in the autumn of my senior year, still without bagging my first kiss, I mustered the courage to ask out Karen. And broke my best friend's heart in the process.

The lightning-quick back story: In the early '80s, like today, kids either willfully blended in with their peers, or actively broadcasted "Look at me." For years I aspired to invisibility. Deficient in many categories, I knew I'd never be socially adroit or a leader type. I merely wanted to look like everyone else, and I dutifully wore my penny loafers and khaki pants, and listened to Loverboy, the Cars and Huey Lewis and the News. I kept my head down, got A's in all my classes and avoided the few bullies who could embarrass me by, for instance, pointing out the boner I was hiding behind my geometry notebook.

Not that females were unknown to me. Despite investing every hour of my free time in video and role-playing games, the guys I hung out with still managed to attract girls. Not the school's stereotypical A-list of jocks and social butterflies, but a species culled from the curious underbelly of band geeks, student government treasurers and French Honor Society members. Mary Ann played the flute, clarinet and piano. Rachel dyed her hair hot pink and wore a purple leather jacket. Claire said she wanted to join the CIA. These girls could keep up with our "fart in your general direction" Monty Python routines. They sat with us at the male misfit toys table in the cafeteria. Like related tribes, we found each other and it was good. But I did not try to date these womenfolk.

Meanwhile, my best childhood friend, Russ, and I began to grow apart. Russ lived about 100 yards away, through a patch of woods that separated my house from his. Since kindergarten, we went sledding together, built model rockets together, played kickball together and explored every nook of our world -- rivers, woods and sand pits -- bound by the range of our single-speed Schwinn bicycles. We spent nights at each other's houses, watching "Fantasy Island" and "The Incredible Hulk." We drew superhero comics and simultaneously read "The Lord of the Rings." We even invented a D&D-like oral storytelling game about two James Bond-like heroes who one-upped each other on their adventures.

"OK, after he gets ejected from the volcano," I'd say, as Russ and I walked the half-mile to our elementary school, "then my guy lands on his feet, turns around and guns down the bad guys. Bam!"

"OK," Russ would counter. "Then MY guy jumps on his motocross bike and books it down the mountain, peeling out as the lava almost fries his butt."

And so on. Our "guys" survived landslides, pythons and villains. They trekked through jungles and across the Arctic Circle. When I moved away to live with my dad and stepmom for a year, Russ and I continued our "and then my guy" adventures via weekly, handwritten letters illustrated as only 12-year-old boys can, replete with poorly executed superhero rip-offs. Which is to say, badly.

But by the time ninth grade rolled around, which involved being bussed to the neighboring town and its larger, regional high school, other friends began to replace Russ. Not a conscious decision. More by way of osmosis. Russ and I would still take the one-hour bus ride each morning, but our conversations got shorter. I had nothing against him -- nothing I could name, anyway. As freshman became sophomore year, Russ gravitated towards jockdom. I headed deeper into the dungeon.

Back to Karen. We had a class together, and somehow she began to sit with the cafeteria misfits. Blue eyes, blond hair, athletic, a jock, a starter on the volleyball team. She also had an edge: spiky hair, funky clothes. She didn't play D&D, but I thought she was cute. My sister -- class president, athlete, socially acute -- was also on the volleyball team. She gave me an "in." Before long, I was going to all the games. One problem: I noticed Russ, who was on the track team, lurking with Karen in the halls after school. I knew Karen also ran track. Surely, he was interested. Surely they were dating?

One night, after watching the volleyball team dominate yet another opponent on its run to the New Hampshire state championship, I asked Karen out on a date. No idea what language I used -- possibly Elvish or Klingon. Whatever I uttered, it worked. We did the first date thing: ate pizza (check), walked aimlessly around town (check). Next date, we kissed (check!). A few dates later and we were wrestling on her living room floor. I was falling in love.

But what about Russ? I felt guilty I'd lured away Karen. I knew he'd be pissed.

"So are you two going to duel or what?" my friend Eric asked one day after school. Eric and a couple of our friends took classes at Fred Villari's Studios of Self Defense.

The ass-kicking never happened. Russ never said a word. I avoided him in the hallways. I rode my moped, a Honda Hobbit PA-50, to school to avoid him on the bus. Weeks became months. As Karen and I fully entwined, the last connection between Russ and me snapped. The last time I saw him was graduation day, June 1984.

Of course, that first romance was somewhat shorter than I'd hoped, imploding the fall of my freshman year at university. College begat post-college, longer-term relationships, marriages and/or attempts at marriage, then the diaspora of friends beyond the homeland. Over the years, I'd occasionally hear from Russ's older brothers. But what had happened to Russ, the turns and twists his life took, faded into rumor, like a poorly remembered tale. Unenthusiastically, I reached out to him once in my 20s, I think, and again in my 30s. This was before the age of Facebook and Google. No luck. I didn't even see Russ at my 25th high school reunion. In a way, I was relieved. That decades-old crime of the heart still haunted me. As much as I wanted to see him, and apologize, to bring harmony to the universe, I also dreaded having to face him.

Then, late last year, Russ's dad died. I found out via Facebook. On an icy, wind-bit night, my sister and I attended the wake. As we drove closer to the funeral home, I began to panic. What would Russ say? Would he give me the cold shoulder? Would he sock me in the mouth?

I walked in and eyed the room of mourners. I quickly spotted Russ's three brothers, sister and mother, all of them a little grayer, a little chubbier, a little more worn around the edges, but clearly them. And Russ. There he was: 26 years later, but unmistakable.

Russ was speaking with other friends from that other period in our lives. I made my way down the line. Then, the moment I'd dreaded, but also ached to resolve since the demise of the Reagan administration, was upon me.

I drew closer. We embraced.

Russ looked at his son, then back to me. "Michael, this guy here was my neighbor growing up. Back in the town where Grandma and Pops live. His house was just through the woods. We spent a ton of time together. Remember the sleepovers? We were at each other's house two or three nights a week. We'd call up, 'Ma, I'm eating at the Gilsdorf's again.'

"We could walk that path in the woods between our houses at night, even blindfolded, we'd been back and forth so much. It's probably all grown over now."

"This guy's mom," Russ said, eyeing his son, then glancing at me, "YOUR Mom was my third-grade teacher."

"And YOUR mom practically raised me," I said.

Michael smiled. I struggled for what to say next.

Then Russ gave me a long, hard, warm look. He paused, looking at the air above my head. Then back at me. "This guy was the best friend a guy could ever have."

Uh-oh, here come the waterworks, I thought to myself.

Nothing about Karen. Nothing about how I'd blown him off. Or been a thief. Or had otherwise been a conniving bastard or a lousy friend. Not a peep. So perhaps I wasn't a villain. Or perhaps Russ wasn't even interested in Karen. A wave of relief hit me, followed by an undertow of humility. I thought I had wrecked this guy's heart. I had inflated the effect I had on his life -- me, some geeky former friend. None of this was about me. Or, if it once was, he had long ago forgiven and forgotten. I knew I didn't need to speak of it. Ever again. Case closed.

I didn't know what to say. I blurted something to the effect of, "That's real sweet of you. You were a great friend too." The rest of the wake passed in a blur of hugs and well wishes, and trips down the corridors and alleyways that branch off of memory lane.

Later that weekend, my sister and I went to Russ's mom's house, where his family was gathering one last time before dispersing now that their father was laid to rest. We shared a meal like the old days. We stood around the kitchen and drank beer, and tried to compress about three decades into three hours. We vowed to not let as much time pass until our next meeting.

Then Russ introduced me to a woman I hadn't seen at the wake. "Ethan, this is Sheryl," he said. "My wife."

She looked awfully familiar. I gave her a quick once over. Blue eyes, blonde hair. Probably athletic. Holy crap. Subtract 25 years, and she looked just like Karen.