Two and a half years after he recommitted to working toward a nuke-free world, progress is unsteady 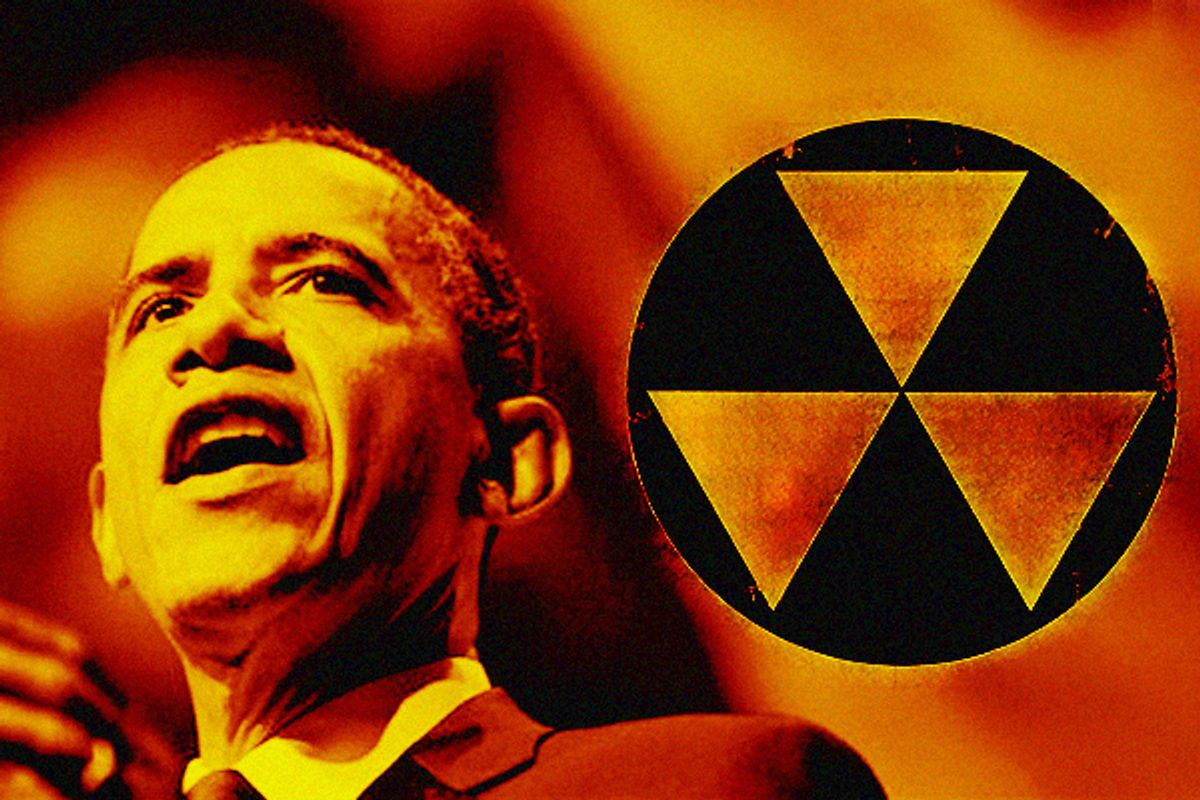 It seems a distant memory now, but just a few months into his presidency, Barack Obama traveled to Prague to declare his "commitment to seek the peace and security of a world without nuclear weapons."

Press coverage of nonproliferation in recent years has focused overwhelmingly on Iran. But this week in the Atlantic, Zack Roth took a broader look at the administration's progress since Obama's April 2009 Prague speech, finding that "many of those following weapons policy say Obama's effort to begin reshaping the U.S.'s own massive nuclear arsenal in light of the zero goal has proceeded far more slowly than expected."

Part of that picture is a plan to spend hundreds of billions of dollars on "modernizing" America's nuclear stockpile. But there have also been victories on the diplomatic front, including a new weapons reduction treaty with Russia.

Now is a good opportunity for an update on the perennially under-discussed topic of the weapons that could, in a single exchange, wipe out a sizable chunk of the human race. I spoke with Daryl Kimball, executive director of the Arms Control Association in Washington.

Taking the last two and a half years together, how would you assess Obama's record?

A great deal has been achieved under this administration, but there is clearly much more that has to be done, especially with respect to further U.S. and Russian nuclear arms reductions and in bringing the test ban treaty into force. There has been no progress in stopping the further production of nuclear weapons material by those states that continue to do so, which are primarily India, Pakistan and North Korea. We need to keep going forward with as much speed as possible to better secure the nuclear material stockpiles that, if stolen or lost, could lead to a nuclear terrorist incident.

Getting into the specifics of Obama's Prague speech, has he followed through?

In the speech, he rededicated the United States to the goal of a nuclear weapons-free world, which has been a formal policy goal of the U.S. for decades. He said that to move in that direction, he would pursue several key initiatives. One was to renew efforts with Russia to further reduce their Cold War strategic nuclear arsenals. And within a year, he and his people had negotiated a new strategic arms reduction agreement with Russia. Several months later, in December 2010, that was ratified by the Senate.

He also said that he would pursue reconsideration by the Senate of the 1996 treaty to ban all nuclear weapons test explosions. On that front, his administration has commissioned several technical and intelligence studies and it has fortified programs to maintain the U.S. arsenal without nuclear test explosions. But very little headway has been made in terms of speaking to senators about the treaty itself. So the prospects for ratification are highly unlikely before 2012.

He spoke about trying to jump-start global negotiations on halting the production of nuclear weapons material, or fissile material. Those negotiations have been blocked for about a dozen years. Right now the main problem is Pakistan. Those negotiations have still not started. He also said the global community needs to accelerate efforts to prevent global nuclear terrorism, which means securing the most vulnerable nuclear material. So he convened a very successful 46-nation conference in April 2010 that put together a four-year plan to secure this material.

Has the number of nuclear weapons the U.S. possesses actually changed in the past few years?

Let's start with the basics. The U.S. has approximately 5,000 nuclear weapons of all types. Russia has slightly more, though we don't know how many. Of those, the U.S. deploys 1,800 strategic [i.e. intercontinental] nuclear weapons and Russia deploys 1,500. Each country has additional thousands in reserve or of the short-range tactical variety. The New START treaty, ratified by the Senate last year, will require that the U.S. and Russia move down to no more than 1,550 deployed strategic weapons each and reductions in the number of missiles and bombers that can carry those warheads. So that treaty modestly reduces the numbers. But it also reestablishes on-site inspections and verification mechanisms so each side knows what the other has and is confident the other is not secretly building up.

To put this in perspective, the next largest nuclear power is France, which has just under 300 nuclear weapons, and China, which has just about 300. Britain has about 200 of all kinds. Of the Chinese weapons, only about 40 to 50 are on long-range systems like intercontinental missiles. India, Pakistan, and Israel have around 100-150 each; North Korea possesses no more than a dozen.  So the U.S. and Russia still have more.

I was struck by your recent essay about nuclear weapons spending and the congressional super-committee that is looking for ways to cut the deficit. You wrote:

The Obama administration has outlined plans to replace 12 of the existing 14 Trident nuclear-armed submarines that now carry 228 missiles armed with about 1,100 thermonuclear warheads. The Pentagon is seeking billions to extend the life of 420 Minuteman III intercontinental ballistic missiles and develop and build a follow-on intercontinental missile. Pentagon planners also want 80 to 100 new nuclear-capable strategic bombers with a new air-launched, nuclear-capable cruise missile to replace the existing B-2 and B-52 bombers that are expected to last another 20 years. The total lifetime costs for the new subs and bombers alone would exceed $400 billion.

What's the status of these plans?

These are long range plans to recapitalize the U.S. nuclear force, meaning: building 12 new submarines; upgrading 430 land-based missiles; building a new long-range strategic bomber to replace the existing B-2s and B-52s. The total lifetime costs of those submarines plus the new bomber is in excess of $400 billion. Congress has to approve these budgets every year. But once weapons systems get started and you start committing dollars, it becomes harder and harder to stop funding them annually. So we are on the cusp of beginning a process to committing ourselves to funding those programs.

So what I propose in my essay -- and a number of other people have proposed, including some very conservative members of Congress like Sen. Tom Coburn -- is that we scale back the new submarine program and defer the long-range bomber program. If you do that, you save $30 billion over the next 10 years.

The fact of these upgrades seems counter to the entire idea of nonproliferation. Is that the right way to look at it or is there some other logic here?

The common-sense reaction to this is that, if we are seeking a world without nuclear weapons, and if we're safer in such a world, should the United States and other nuclear-armed countries be committing enormous resources to weapons systems that are going to last decades and preserve the current nuclear status quo? It does not make any sense. No one is proposing that the United States unilaterally disarm, or that the world's nuclear-armed countries disarm next week. But it certainly doesn't make any sense to commit hundreds of billions of dollars to new weapons systems with far more nuclear firepower than is necessary to deter current or future nuclear-armed adversaries.. We have a choice right now to scale back or push down the road investment in these systems, which have very little relevance to the 21st century international threats we face: terrorism; civil conflicts; poverty; failed states.