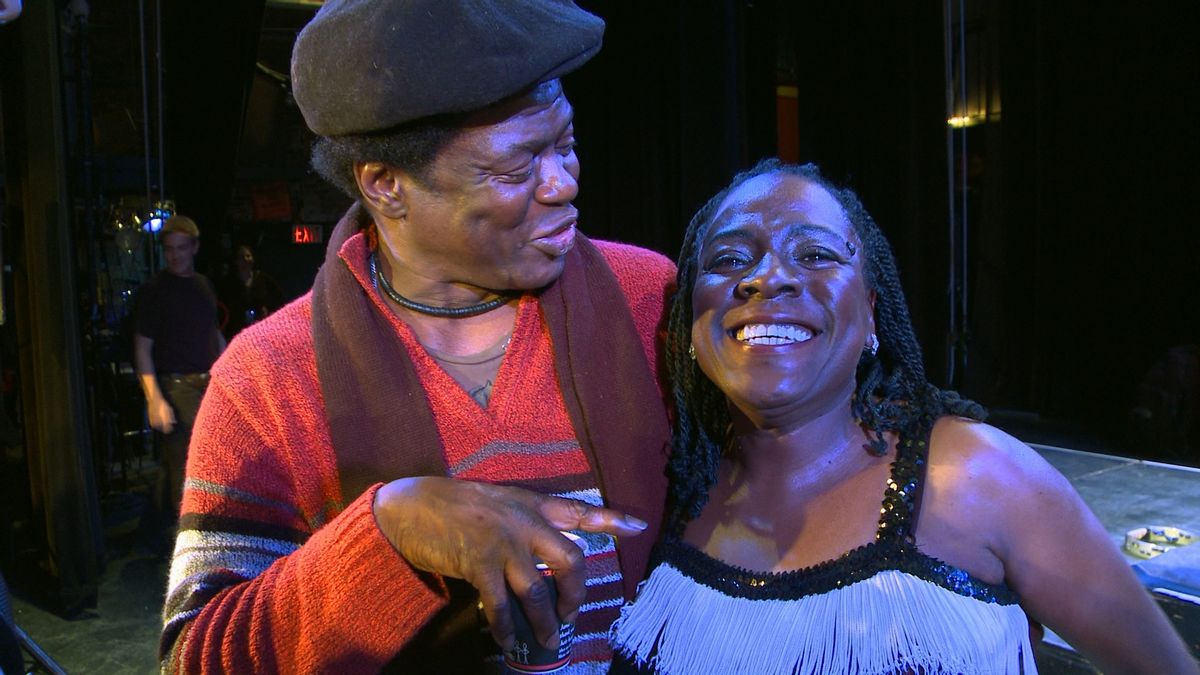 If you like soul music, you’ve come to the right place. Sharon Jones and Charles Bradley are living proof that America has not lost its soul. Sharon Jones and her band, the Dap-Kings, are the leaders of a soul music revival that has swept the nation and crossed the Atlantic to inspire the likes of Adele and Amy Winehouse, whose "Back to Black" album featured the Dap-Kings. Now Jones is joined on her Brooklyn-based Daptone Records label by a powerful new voice, Charles Bradley, whose raw, passionate style recalls the spirits of Wilson Pickett and James Brown. "Quick Hits" showcases Jones and Bradley on tour, spreading the gospel of soul. Sound Tracks reporter Marco Werman interviews the soul man after his big break at age 62.

The Queen of the soul music revival, Sharon Jones, now has a Soul Man, Charles Bradley, to back her up. "Quick Hits" found them backstage at the start of a tour, hanging out and cheering each other on. "Nothing retro about us," sasses Ms. Jones. "We're not imitating. When I open my mouth, soul comes out. Charles, too."

And just to emphasize her point, Jones comes out swinging in this video, with a taste of "He Said I Can" from her 2010 album, "I Learned the Hard Way."

We at Sound Tracks have loved Sharon Jones and the Dap-Kings since we first heard them on the radio. They've turned out four quality albums, including last year's "I Learned the Hard Way." But to really appreciate the excitement and precision of the band and the brassy, high-spirited personality of Jones, you've got to see them live. Next best thing: Watch them onstage in this "Quick Hits" performance.

Lucky for all of us, Sharon Jones and the Dap- Kings love to tour. They've played everywhere from the Apollo Theater in Harlem to the Hollywood Bowl. Keep your eyes and ears open, they're coming to a theater or festival near you.

Sometimes a song is more than a song. It can be a confession, a cry from the heart, a catharsis. When Charles Bradley sings "Heartaches and Pain" onstage, it's a classic, old-school, soul music performance. There's even a showy James Brown touch, with Bradley carrying the microphone stand on his shoulder as if it were his cross to bear. And hey, we all have our burdens, right? But like any truly great soul performer, Bradley does more than entertain. He brings a life of loss and sorrow to the song, as he tells the story of his brother's murder.

"How long?" shouts Charles Bradley, and it's like an electric shock, and an existential question. It's King Lear raging in the storm. Mahalia Jackson or Martin Luther King, asking when will the misery of segregation end? Set my people free. For Bradley, it's a question about all the world's woes, but it's also very personal. As Bradley tells Sound Tracks reporter Marco Werman in this "Quick Hits" interview, his moment in the sun has been a long time coming.

Born into poverty, growing up with no parents around, Bradley describes how he was saved from homelessness and addiction by Lyndon Johnson's Job Corps. His religious faith and occasional gigs as a James Brown imitator known as "Black Velvet" kept Bradley "keeping on." But his dream of being a singer in his own right -- his own man -- was a dream deferred until Daptone Record's co-founder Gabriel Roth discovered Bradley singing in a Brooklyn, N.Y., bar. With support from producer Thomas Brenneck and backing from the Menahan Street Band, Bradley is now making up for lost time. No surprise that his first album -- after all these years -- is called "No Time for Dreaming." There's work to be done.