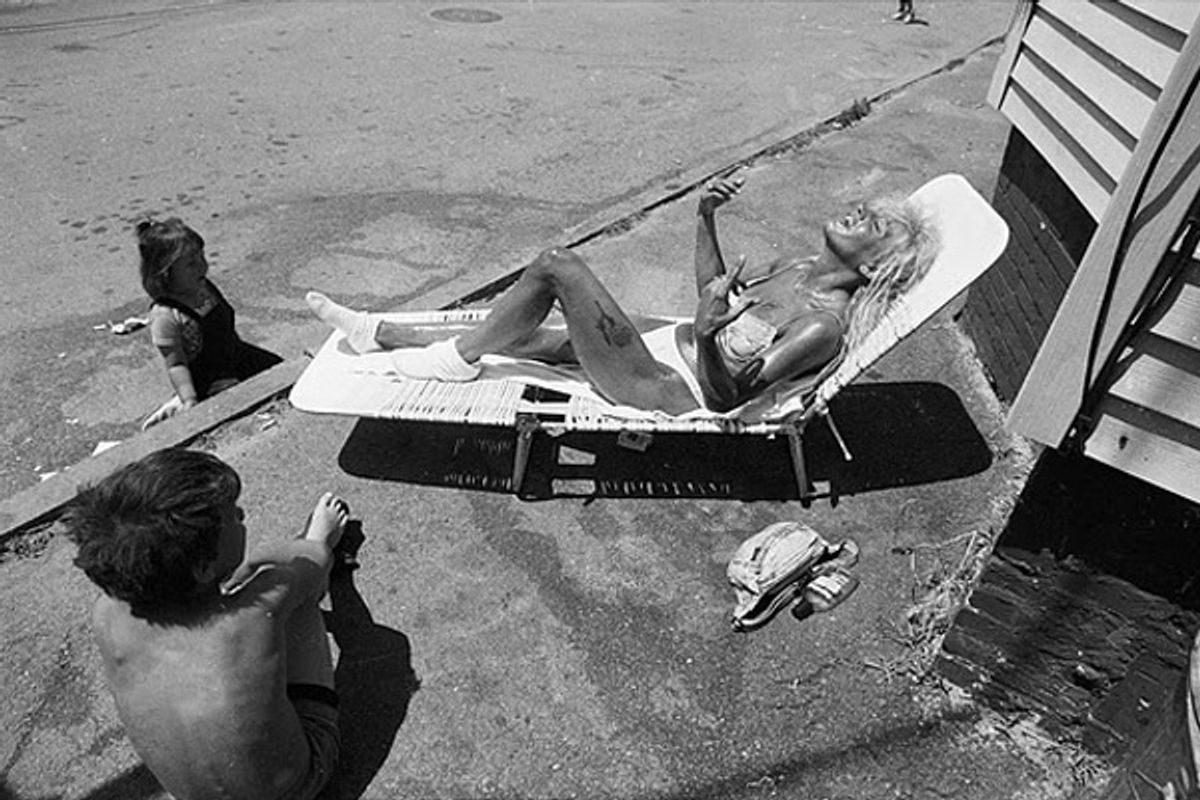 Who is Madeleine de Sinéty? That's what I wondered as I scanned a press release for the Portland Museum of Art's new retrospective of the artist's work. If artistic justice is served, it's not a question people will be asking for very long.

"There is so little reality documented in photography today," de Sinéty's teacher and mentor Mary Ellen Mark writes in the introduction to the catalog that accompanies the Portland Museum's exhibition. "In contrast, Madeleine's work is a tribute to those moments in life that are truly real." You can see for yourself how handsome that reality is, in the slide show that follows.

"[When] I started, [I was] totally ignoring everything about photography," de Sinéty tells me on the phone. "I started [taking pictures] because I loved steam engines, and I wanted to document the last steam engines running in Europe ... I just pushed the button when I saw that things seemed to be right." Her favorite subjects, she says, are "all people living simple lives, with no big machines, or things like that. People who live close to the earth, their whole life -- not connected with the industrial world. It's a world which disappears; fewer and fewer people will be able to live that way."

If you look at de Sinéty's early work, her avowed ignorance of photographic technique is far from obvious; in fact, it's astonishing. And although she eventually did benefit from lessons and workshops in her adopted American home of Rangeley, it's clear that her most precious artistic asset -- her ability to connect with a community and make her subjects feel at ease -- is simply innate.

Over the phone, curator Susan Danly answered a few of my questions about de Sinéty's background and work; the transcript of our conversation is below.

Can you tell me a little about Madeleine de Sinéty's background?

Madeleine ... came to this country in the mid-1980s. Before she came, she had started an interesting career as a photographer working on a project that took her to the west of France, to a small village in Brittany [called Poilley] where she basically lived with the farmers and worked alongside them in the fields. This particular village was quite averse to using mechanized farming, so they still used horse-drawn wagons for haying; they didn't really have tractors, and life was pretty much run as it had been through the 19th century. That was really what attracted her to that way of life. She had also done a small photographic project and a publication about the end of steam trains in France. But when she married an American who worked for UNESCO, they eventually moved to the United States and wound up in Rangeley, Maine -- which is a bit of the back of the beyond, but she forged ahead, making a new photographic career, working for the local newspaper; she was a stringer for the New York Times, had photographs published in the Boston Globe, and was working basically as a photojournalist in those days. She also made contact with the Maine Photographic Workshop, in Rockport, which is one of the most important organizations in this state for bringing international photography to local audiences.

Madeleine signed up and did a workshop with Mary Ellen Mark, and Mary Ellen became a great champion of Madeleine's work; she helped her edit her work, and in fact worked on this exhibition, helping us to edit the wonderful photographs. She's very much taken by Madeleine's approach to documentary photography; [Madeleine's work resembles] the kind of photography that Magnum photographers, for example, were doing in Paris in the '60s and the '70s.

The other body of work, aside from the French and the Maine scenes that are in our show, has to do with a project that Madeleine has done in Uganda. In the '90s, Madeleine went to a prayer breakfast in Washington, D.C., where she met a Ugandan diplomat who invited her to come back to her native village, to see what life was like. Madeleine had a very interesting upbringing; she comes from an aristocratic French family, and her father ran a date plantation in Algeria -- and so her childhood was spent traveling back and forth between North Africa and her family chateau in the Loire Valley. But she had a predilection for African subjects, so she went off to Uganda as an adult and made a wonderful photo study of this village called Paidha; those photographs are also in our exhibition.

So her work draws attention to communities that might not otherwise be noticed.

Yes. Small communities -- communities where the people still do things by hand. And it's not a nostalgic way of looking at them; they're very forceful and wonderful portraits of these people who are so connected, literally, to the earth that surrounds them. She worked with a man in Maine who still did logging with big draft horses, for example, and there's a kind of earthiness to her approach to photography and her view of the world.

Is this the first major exhibition of her work?

She's had a few works exhibited and published over the course of her career, but she's never had a major retrospective; this is the first time her work is out there.

"Madeleine de Sinéty: Photographs" is on view at the Portland Museum of Art, in Portland, Maine, now through Dec. 31, 2011.