The right-wing movement has won nearly every battle it has fought. An expert explains what that means 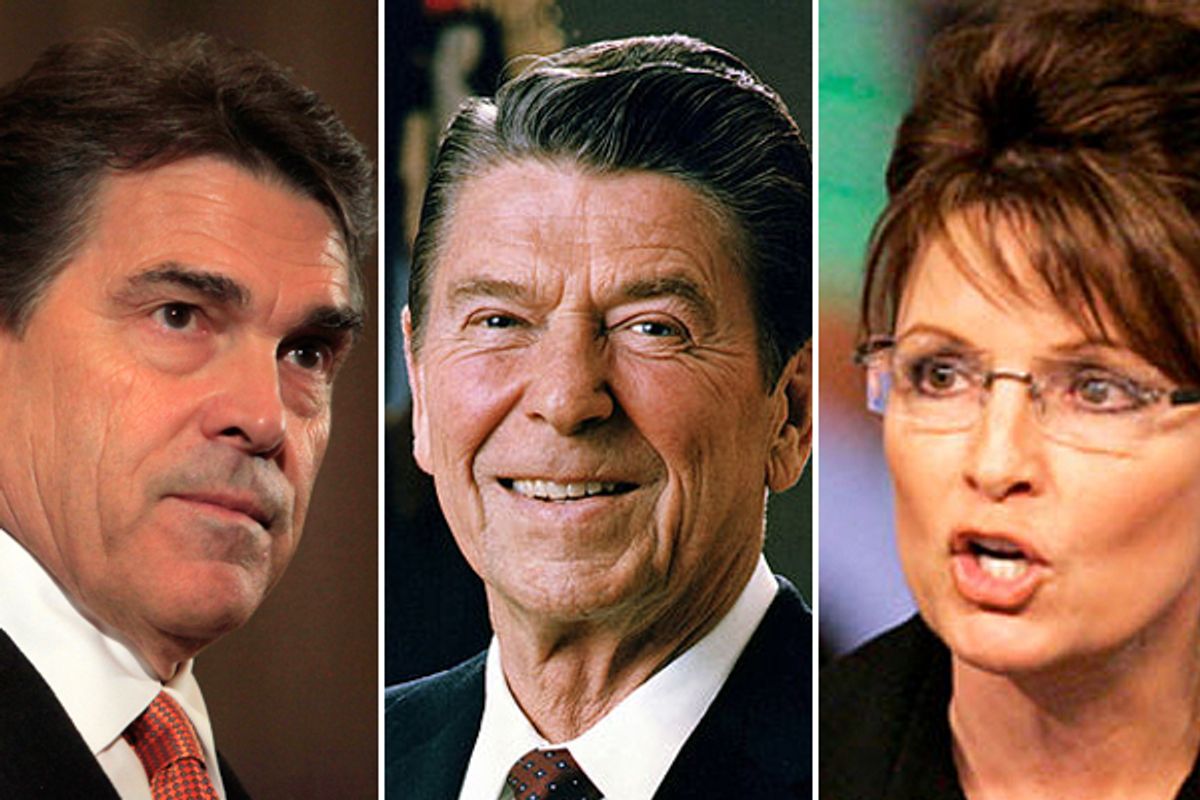 Has American conservatism suddenly gotten uglier? In the last few weeks, it's certainly seemed like it. During a recent GOP debate, Ron Paul was asked what should happen to a sick young man without health insurance. Members of the crowd answered for him, yelling that he should be left to die. At the Florida debate, a chorus of boos greeted a gay soldier serving in the Middle East. Both incidents prompted outrage and shock among the media -- and speculation about the loosening moral fabric of the Republican Party.

But according to Corey Robin, the author of the new book "The Reactionary Mind," these ugly outbursts shouldn't surprise anybody. Robin is a journalist and professor of political science at Brooklyn College who has written extensively about the conservative movement; his book is an overview of the past 200 years in conservative thought. And the Tea Party's ugly remaking of the political landscape, he argues, isn't as novel and transformative as many people think it is. What it says about the state of the American left, however, might surprise you.

Salon spoke to Robin over the phone from Brooklyn, N.Y., about the triumph of the American conservative movement, the meaning of Sarah Palin and Obama's real political slant.

You end the book with a statement that the modern conservative movement has successfully defeated the left. Why do you say that?

Social conservatism mainly came about in response to, broadly speaking, the labor question. Beginning in the 1880s, the working classes started making democratic claims about the reform of the workplace, and many of the distinctive things we associate with conservatism come out of that experience. It was a roughly 100-year battle, and to all intents and purposes, they have won that battle.

When you have a president who celebrates the market; who thinks of the State as maybe necessary, but certainly not the first order of business; who believes that the businessman is the driving engine of the economy, there’s just really no question. And if you want to break it down on policy grounds, look at the level of unionization. Look at the level of wealth inequality. All of those indices that we are always talking about, conservatism has won.

On civil rights, they weren’t able to beat back the fundamental challenge of the civil rights movement, but they certainly were able to beat the movement's second wave and  really bring it to a standstill. Likewise with the women’s movement. Wage inequality is still quite large, and if you do a survey on all abortion rights and reproductive rights state-by-state, they are clearly winning that battle. They haven’t been able to overturn Roe v. Wade, but, effectively in many states, you just don’t have access to an abortion. Though I think, on a whole wide array, the one area where they probably have lost is on gay rights.

I was going to mention that. Why do you think that is?

I don’t have a good answer to that. Partially, I think they were caught off guard. I mean, gay rights was a very late arrival to the '60s emancipation movement. It gets started in the '70s but it really becomes a real force in the '80s and the '90s, and I think it’s partially a testimony to the gay rights movement. They completely reinvented a whole repertoire of social movement activity and were daring and defiant. But who knows? It’s still very early. The fact is, you still only have gay marriage in, what, five or six states.

Which is funny because it seems that gay marriage or gay rights seemed like such a safe wedge issue by conservatives just a few years ago, and now it doesn’t seem to have all that much power anymore.

Conservatism is always a response to many things, but particularly to challenges to hierarchy and the private domain. The gay rights movement has been just so successful in pressing that. You know, gay men and women coming out to their own parents, to their families, their co-workers and neighbors. I just think it was such massive onslaught. I think they really didn’t know how to deal with it.

You also argue that the defeat of the left is a mixed blessing. Why?

Going back to the fundamentals: If conservatism is a reactionary movement, once it has succeeded in its project of beating back the left, it really has nowhere to go. You see this increasingly amongst more thoughtful conservatives -- a real concern that conservative ideas are not what they used to be, that they don’t have the same heterodox, innovative flavor that they in the ’50s and ‘60s and ‘70s. That’s because of their success. I think this is where commentators really get themselves turned upside down where they think the reason conservatism is failing is because its ideas are failing. That gets it complete backward. Its ideas are failing because it was so successful.

How closely do you think the Tea Party represents true conservatism?

But if you go back to the original source, Edmund Burke, the things people accuse the Tea Party of being -- ideological fanatics, unrealistic, Utopian, fundamentalist -- are built into the DNA of the conservative movement. It has been the M.O. of conservatism from the very beginning, and you see it time and time and again, and it's just so amusing to see people argue that Ann Coulter is [more shrill] than Bill Buckley. Go back and read Bill Buckley. He was the original Ann Coulter.

A lot of people I know talk about how the political discourse on the right is more coarse and reactionary than it's ever been. What has changed?

Conservatism arises in reaction to something, and it oftentimes perceives itself to be the underdog. The welfare state was dominant in the mid-20th century, and so when conservatism was reacting to that, it was a movement that was by definition constrained. But right now, the Tea Party is not constrained. You have an extraordinarily weak Democratic Party. This is a president and a party who were handed an opportunity that has not been seen in generations. And yet the Republican Party, a minority party that was absolutely repudiated at the polls, managed to turn this into a victory. I don't think the DNA has changed, but I think its external environment has changed, and that's why you're seeing this kind of expression of its inner tendencies. Now you're seeing what conservatism looks like when it has won.

Since the 2010 midterm elections, the most visible efforts of the GOP have focused on women's and employee rights. Why do you think that is?

Elizabeth Cady Stanton famously asked why it is that these guys were so resistant to the franchise to women in the public realm. She argued it's because they didn't want to give up power in the home and I think she was absolutely right. There's something about the intimacy of control in the private realm -- the home and the workplace -- that has always been central to conservatism. After the 2010 elections the first thing they did was to go after labor rights, and not just in Wisconsin. Something like the order of 35 states have some version of the Wisconsin plan. The Times just had a piece on the onslaught on reproductive rights, also in about 35 states.

The left as a whole segregates the issue of reproductive rights as if it's separate. But it is absolutely critical and central to the conservative project because it is about man's control over women in the home. Go back to the French revolution and Louis de Bonald, who is one of the great theoreticians of the counterrevolution -- he was obsessed with the liberalization of divorce because he saw a connection between the emancipation in the family and of women and the whole revolutionary project.

Conservatism has been associated with manliness or manly pursuits. How successfully do you think Palin and Bachmann have changed that?

I think they are. But it's not as much about gender politics as it is about the politics of victimology. It's really stunning if you look at the history of the great conservative theoreticians and politicians -- Burke, Disraeli, Andrew Carnegie to some degree at the turn of the century, and then Francis Fukuyama, Irving Kristol, Norman Podhoretz -- it's always been a movement to a remarkable degree led or theorized by outsiders. And there's an awful lot of reasons for that, but outsiders have been the real source of metabolism within the conservative movement. Sarah Palin portrays herself as the ultimate outsider. She's a woman in a man's world, and she's from a state that's literally outside of the 48 contiguous states. It's just absolutely critical that the movement feed off these outsiders to reenergize itself.

Sarah Palin recently made a few comments praised by some people on the left, like Ralph Nader, arguing that there's a permanent political class that's detached from the will of the people. Is that actually a betrayal of conservatism?

No. It's just bullshit. There's a distinction between democratic and populist and we should never, ever conflate them. Just because Sarah Palin affects that style and rhetoric by no means makes her democratic, and remember -- and Nader knows this more than anyone else -- the preeminent sphere of inegalitarian non-democratic practices is not the state. It is in the marketplace, and she wants to enhance the power of employers to wield their ever more autocratic will.

To what extent do you think Obama embodies conservative ideas?

I don't really know what's in the heart of hearts of this man. He seems to be extraordinarily impressed by the credentials of elites, especially Wall Street elites, but more important than him, and his biography or his ideology or his persona, is that he's part of a party that has been completely divested of its progressive organizational infrastructure, the labor movement in particular, but also civil rights. I just don't see that he's a conservative, but I would certainly say he is a symptom of the power of conservatism in the United States.

Do you think we at least think of America as less of an empire?

Well, you certainly don't see the kind of full-throated imperial rhetoric that you saw under Bush, which doesn’t mean the violence isn't happening, but it's not celebrated. There's an extraordinary amount of violence that the United State is still perpetrating that goes unremarked and is unremarkable to our culture and that in itself I think is a symptom of some kind of imperial presence.