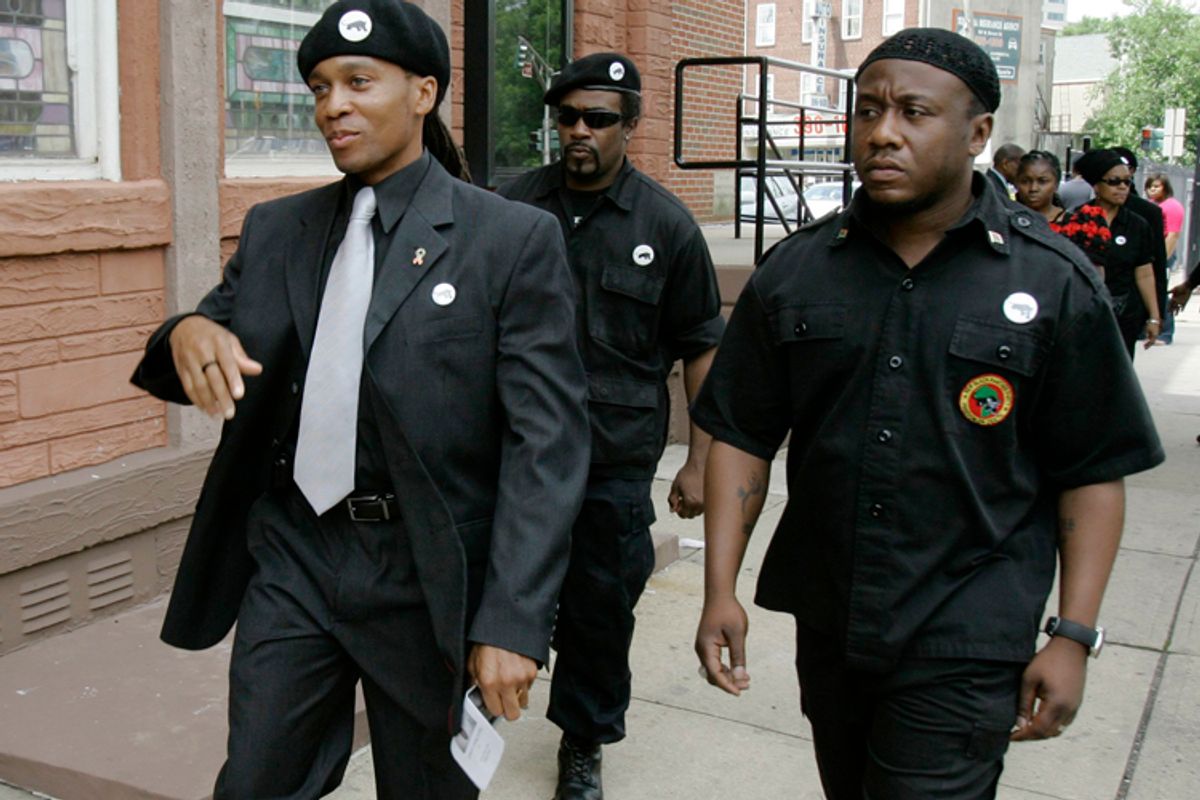 Andrew Breitbart's loud, dumb BigGovernment site has a loud, dumb story about how Barack Obama "appeared and marched with the New Black Panther Party in 2007." The occasion was the 42nd anniversary of the march from Selma, Alabama, and in addition to Barack Obama, Hillary Clinton and Al Sharpton were also there, along with dozens of civil rights era luminaries and thousands of other people because it was a massive annual celebration and not actually an Obama campaign event.

The New Black Panther Party is a cartoonish fringe group of a couple guys who play "'60s radical" dress-up and say mean things about whitey for Fox cameras in order to scare old white people. They have been explicitly rejected by the old Black Panther Party. For some reason, various conservatives have dedicated themselves to proving that this weird, marginal group of Nation of Islam cast-offs is somehow supported by or deeply connected to the Democratic Party and the Obama administration in particular, because, you know, Eric Holder and Barack Obama, those are two guys who very obviously share the values of extremist anti-white proponents of racial separation.

So Breitbart "proves" something or other about the essential anti-white racistness of the Obama campaign by noting that members of the inane New Black Panther Party were spotted by cameras near Obama, at various times, and also NBPP head Malik Zulu Shabazz spoke at the event.

(Brietbart goes on to publish two pictures of the event despite the photographer withholding permission, because "The First Amendment allows photographs of such enormous public importance to see the light of day." Good luck with that argument in court?)

This is a shocking story, and a breathtaking indictment of the mainstream media which went out of its way to avoid vetting Obama as a candidate — and to make sure anyone who tried to do due diligence got no sunshine. A candidate who chose to appeared in the company of, say, the KKK, would have provoked relentlessly hostile media coverage and, in short order, have been marginalized as disqualified to hold responsible elective office.

Here's the bit of this sad, desperate reach that is the saddest and most desperate: "Andrew further reminds us that, in March 2008, the Obama campaign website posted an endorsement of Obama by the New Black Panther Party." Whoa, did they really? Shocking if true! It is, of course, not true. It was a user-generated blog post on the Obama campaign site that the campaign removed as soon as they became aware of its existence. Because websites do not "post" things to themselves, generally, McCarthy's statement can't even be charitably described as technically accurate. It's just a lie.

A random stupid incorrect Breitbart smear is worth paying attention to only to the extent that the smear threatens to bubble up to the more reputable conservative press, or Fox, or Republican elected officials. The McCarthy endorsement means keep an eye on this one!