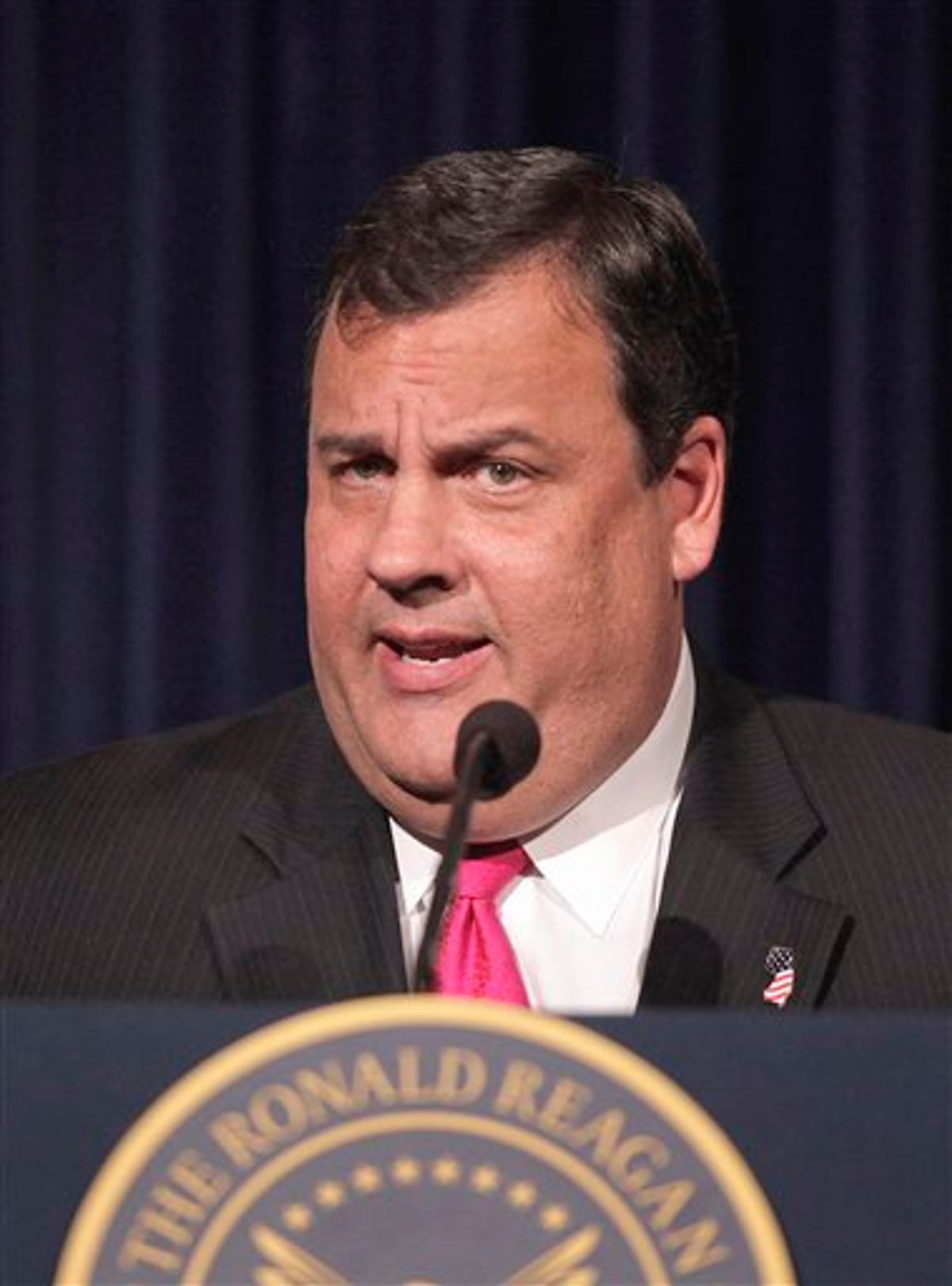 FILE - In this Sept. 27, 2011 file photo, New Jersey Gov. Chris Christie speaks at the Ronald Reagan Presidential Library in Simi Valley, Calif. More than a year out from Election Day, all sorts of Republicans, including Christie, are making a point of keeping themselves in the national spotlight, stoking speculation that they're positioning themselves as potential running mates for the eventual GOP presidential nominee. (AP Photo/Jae C. Hong, File) (AP)
--

When it comes to Chris Christie's possible presidential candidacy, what happened over the weekend was pretty much inevitable, but also potentially significant: influential Republican voices publicly weighing in with less-than-enthusiastic assessments of his prospects, and indications that Christie is privately being swayed by warnings about the logistical problems that would attend a late-starting bid.

Wisconsin Gov. Scott Walker, who sought Christie's counsel as he muscled a ban on collective bargaining by public employees earlier this year, told the New York Times that his heart wants Christie to run -- but that "[m]y head looks at it, though, and thinks anyone who is in their first term as governor needs to run for reelection first. It’s tough to be ready to be a candidate and to be well-versed, particularly in foreign policy, and to have an organization."

On CBS's "Face the Nation," John McCain warned that "the swimming pool looks a lot better until you jump right in. The water may not be quite as warm as you think," while George Will used his "This Week" platform on ABC to challenge reports that Nancy Reagan had urged Christie to run: "I spoke to her last night. She laughed merrily at that absurdity." And from would-be rival Herman Cain, whose support among Republicans has surged in the last week, came this: "I believe that a lot of conservatives, once they know his positions .... they're not going to be able to support him. So, I think that is absolutely a liability for him if he gets in the race."

In a way, there's nothing surprising about any of this. In the middle of last week, after his well-received performance at the Reagan Library, Christie began sending signals that for the first time he really was considering entering the Republican race -- and this is the kind of treatment presidential candidates get.  But it also calls to mind an earlier moment in Christie's political career when he faced a similar dilemma, and when unenthusiastic signals from some Republicans convinced him that the risk was just too high to give in to his temptation to say yes to a draft movement.

This was seven years ago, when Republicans in New Jersey found themselves with what seemed like a golden opportunity to win back the governorship, if only they could find an all-star candidate.

Gov. Jim McGreevey had resigned in August 2004 (officially because of a sex scandal, but also after a stream of non-sex scandals had undermined his standing with voters), leaving fellow Democrat Richard J. Codey to serve as acting governor through the 2005 election. The state's Democratic bosses were determined to prevent Codey from seeking a full term in '05; instead, they wanted Sen. Jon Corzine, mainly because Corzine was willing and able to shower county and municipal Democratic organizations with cash.

But Corzine was hardly a beloved figure in the state. Despite plopping down $63 million of his own money during his 2000 campaign for the Senate (well, that was the official total -- for amusement, you might want to ask some of the state's old Democratic hands what they think the real tally was), Corzine barely won, besting Republican Bob Franks by just 3 points, even as Al Gore carried New Jersey by 16. And it was an open question whether he'd be undermined by his own party label in '05, with voters increasingly associating the state's ruling Democratic Party with corruption. In addition to the parade of McGreevey scandals, the ethics-fueled implosion of Sen. Robert Torricelli in 2002 was also still fresh on their minds.

But when the 2004 election ended and New Jersey Republicans began looking seriously at '05, they panicked. The party's two front-runners were both retreads whose previous statewide candidacies had raised serious red flags: Bret Schundler, who had been painted as a far-right extremist by McGreevey and swamped in 2001; and Doug Forrester, who had caught two profoundly lucky breaks in his 2002 Senate campaign (winning the GOP nomination only after the front-runner's office was raided by the FBI just before the primary, then building a commanding general election lead as Torricelli's ethics woes dominated the news), only to falter badly when Torricelli quit the race five weeks before the election and he was left to stand on his own against the new Democratic nominee, Frank Lautenberg.

And then there was Christie, who was then the U.S. attorney for New Jersey.

Everyone knew he had gubernatorial aspirations. He'd briefly been an up-and-comer back in the mid-'90s, winning office in GOP-dominated Morris County, but his overt ambition, cockiness and aggression alienated his fellow Republicans and he flamed out spectacularly, finishing dead last in the GOP primary in his 1997 reelection campaign. Only by raising big bucks for George W. Bush in 2000 and then catching the break of a lifetime -- his  best friend and law partner used his own connections to Bush world to secure Christie his appointment as U.S. attorney -- did he resuscitate his political career.

That appointment quickly proved to be the best thing that ever happened to Christie, who focused on public corruption, taking down one politician after another, always with a dramatic press conference that would usually make it onto the nightly newscasts of the New York and Philadelphia network affiliates. The publicity was priceless. Less than a year after he took the job, Republicans were already beginning to see him as a statewide prospect, and by the end of 2004 many regarded him as their dream candidate.

And so it was that the weeks after the '04 election were dominated by speculation about whether Christie might save his party and jump into the gubernatorial race. Plenty of Republicans wanted him to. Corzine seemed beatable, attacking Democratic corruption felt like the best weapon against him, Christie seemed like the ideal candidate to carry that message, and the GOP's other options all reeked of woeful deficiencies. Something close to a draft movement started up.

Christie himself was very interested in running, but he also had reservations. Bush's November victory meant that Christie could stay in office for his second term -- meaning that Christie could spend four more years busting big-name politicians, then run for governor in 2009. There would be plenty of risk in this -- if another Republican won in '05, there'd be no governorship to pursue in '09 -- but Christie also truly enjoyed his job. He sent word to Republican leaders that he was ready to run, but that he needed a commitment from them: The state's most influential county GOP leaders all needed to be on board, or he wouldn't do it. (In New Jersey, most county party organizations award preferential ballot spots to their endorsed candidates, and when it comes to get-out-the-vote operations, some of the top GOP organizations could easily be confused with traditional Democratic machines.)

Essentially, Christie had concluded that the risk of defeat in a primary would be too high in a genuine three-way race with Schundler and Forrester. But if he could marginalize Forrester, a more moderate/establishment-friendly candidate, and force a clear one-on-one contest with Schundler, a favorite of grass-roots conservatives, it would be worth taking a shot.

Christie's backers tried to make it happen, with one of the most powerful county GOP chairmen in the state pressing his fellow chairs to get on board. But there was resistance. Other candidates had actively been courting GOP leaders and activists for months, something Christie was restricted from doing because of the officially non-political nature of his office. One Christie booster reported at the time that "one county chairman said, 'Well, I would support him, but my people don't know him.'" The movement stalled, and just before Thanksgiving Christie announced that he wouldn't be a candidate.

"After a great deal of thought and consideration, I have decided that the best way for me to serve the people of the state of New Jersey at this time is as the United States attorney," he said. "As I have said many times, I love this job."

That pretty much ended the matter, although not quite. With Christie out, many Republicans remained concerned about their gubernatorial field, prompting one last flurry of "Draft Christie" talk in January '05. But Christie's demands hadn't changed. He didn't want to risk a job he loved (and a job that would allow him to maintain his status as a prospective statewide candidate) for a primary campaign he deemed too risky. The unity among GOP elders that he wanted never materialized, so he stayed on the sidelines. And, of course, it paid off: Forrester won the nomination, was drubbed by Corzine, and you know the rest.

It's a story worth keeping in mind now, as Christie rethinks his long-standing opposition to a 2012 White House campaign. He has a job he really does enjoy, and would be risking it by running for president. Sure, he wouldn't have to resign to run, but his standing in New Jersey is tenuous already; the cries of home state abandonment and the humiliation of falling flat on his face would make it difficult, if not impossible, for him to come back from a losing national race and win reelection in 2013. It's enough to make you wonder whether the cold water that some Republicans, even potentially supportive ones, are now throwing on the Christie talk will have the same effect on him that the reluctance of some New Jersey party leaders to just say yes did seven years ago.