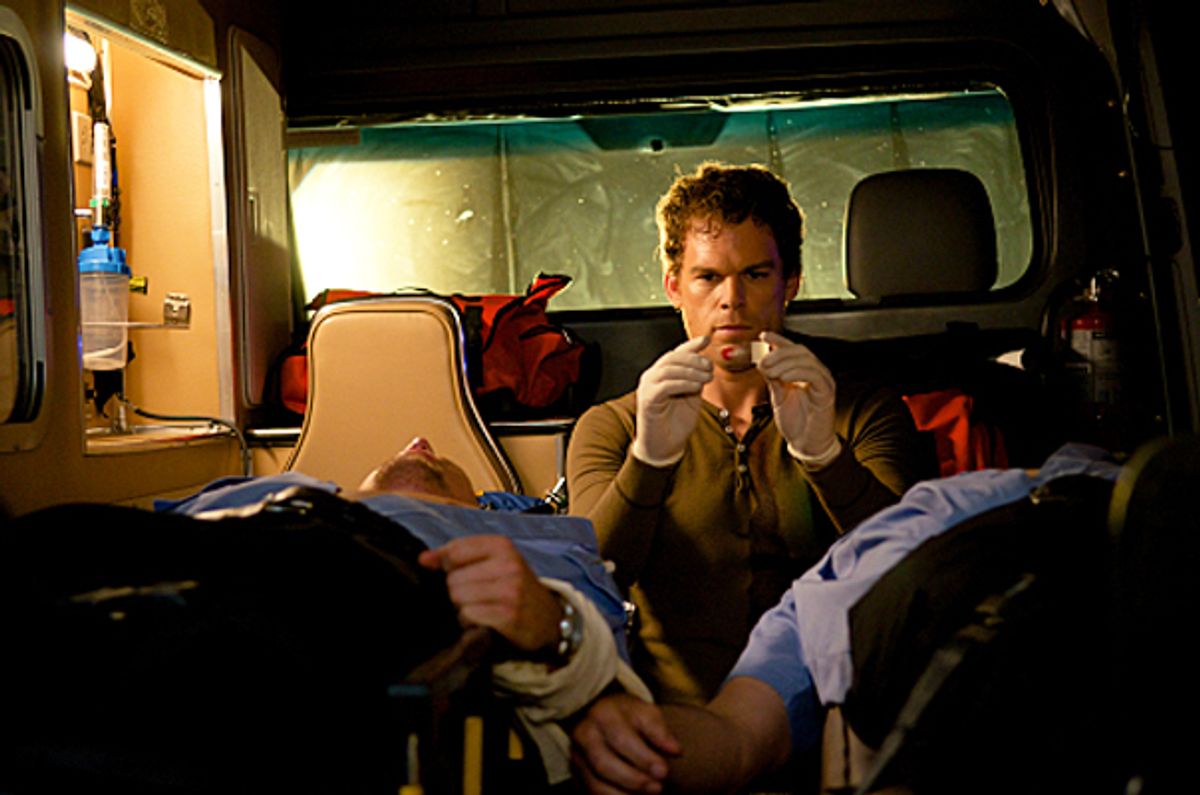 [This is the first installment in a series of recaps of "Dexter," Season 6. It contains spoilers for tonight's episode and presumes at least some past familiarity with earlier seasons. Read at your own risk.]

As far as I'm concerned, Showtime's "Dexter" (Sundays 9 p.m./8 Central) doesn’t derive its core tension from its season-long "A" plot, be it season four's "Spy vs. Spy" duel between Dexter and John Lithgow’s family man/slayer or last season’s oddly endearing, empathetic tale of a vengeance-obsessed rape victim played by Julia Stiles. What makes "Dexter" get thumbscrews-tense is the constant nagging dread of what will happen if -- no, when -- sister Deb (Jennifer Carpenter) learns what sort of person Dexter really is. The idea of a clever and empathic serial killer looking for self-improvement is nonsense, but we buy into it because the show and its eponymous antihero run on consistent fantasy rules. The rules dictate that much as murder is Dex's Dark Passenger, Deb is his Light Passenger, his connection to everything good in him. Were Deb to find out the truth and inevitably reject Dex, he'd be over, uselessly mad -- the balance between Dark Passenger and mordant narrator shot to hell. The show's brilliance lies in its ability to balance all else on this single knife-edge.

Until now. I’m happy to report that after the epically horrifying death of Dex’s wife in Season 4 and the soft-serve departure of Stiles last season, Cupid’s arrow is no longer pointed toward the Miami homicide bureau’s best blood splatter expert. Unfortunately, the demise of Jordon Chase (Jonny Lee Miller), Season 4's heinous motivational speaker/rapist, appears to have inspired this drama's show runners to go really big game hunting and -- it seems -- forget what made "Dexter" so appealing in the first place. Now it's wall-to-wall Faith, God, Fate and Redemption Through Christ. Everything and everyone else -- even Dexter as we’ve come to know and strangely love him, and his relationship with Deb -- are secondary to a laundry list of big themes.

Which brings us to the Season 6 premiere, "Those Kinds of Things," wherein a series that once deftly balanced dry wit and pulp opera becomes paralyzed by chatter, and the most memorable scene involves a floater’s gut leaking CGI snakes. This season opener is so off-pitch, so resolute in its baffling urge to make "Dexter" the show and Dexter the character snotty, snarky, slapstick, zany even. It's an hour of almost constant facepalm.

Things start promisingly, with Dexter in one of those industrial parks he’s so fond of. He's bleeding, so he calls the emergency hotline. The police are arresting hundreds of protesters; it's really something. Once in the EMT van we find that the gut wound is a ruse: he neatly stabs both techs in the neck with his trusty needles and voila!, he's committed double homicide before the five-minute mark. This is the cable show runners’ version of “Back in the Saddle Again,” I guess -- a way of reassuring viewers who feared that the unseemly humanity etched so beautifully last season made the series go soft.

Next up -- a ray of Latina sunshine in the form of Dex’s new nanny, Jamie (Aimee Garcia), sister of detective Angel Batista (David Zayas). Jamie’s there to give Dexter’s wee son Harrison the light, joy and spiritual openness Dexter never had. Get comfortable with that sentiment, because you’re gonna be hearing it a lot -- emphasis on hearing. Another thing you'll hear a lot about is Dexter’s spirituality, or rather his lack of it, which will supposedly be the focus of Season 6, and which explains why Dexter tries to enroll Harrison in a Catholic preschool where a nun grills Dexter on which faith he subscribes to. When Dexter says none of the above, she’s appalled. Later he returns, fully chided, and apologizes for his atheism, and Harrison is allowed entrance. Finally, a "Dexter" episode that'll pass muster with Michele Bachmann.

Dex and his sister Deb discuss their belief systems. Deb is appalled by Dex's belief in nothing more than not getting in trouble (a weak joke we don’t laugh at).  Later Dex discusses his lack of belief with Angel, who regards the wayward Dex warmly as he explains the ways of God and Christ and suggest why Christianity might matter to a kid just out of diapers. Dexter finds this interesting, and asks him to please explain some more. Angel happily explains the catechism haltingly; in voice-over, Dex makes obnoxious, witless remarks.

Why, show, why? In a world where most good series follow the most golden of rules — show, don't tell -- "Dexter" in its dotage has become cocky about telling and telling but rarely showing.

At some point, we see Lt. Maria LaGuerta (Lauren Vélez) being promoted to captain. Yay, right? Not so much. About three minutes later, she tells someone else about how she rigged the gig through blackmailing and general skulduggery. Chicks, man, right? But then, finally! A plot point! Mon Dieu! Alas, it’s just more bait and switch for more epistemological yada-yada. Dex finds out that a high school douchebag jock is probably a wife-killer. He must find him and score some blood for a DNA match so he can justify clearing space for said jock on his table. So he attends his 20th high school reunion, where a new and incredibly ill-advised element is added to the "Dexter" universe: slapstick humor.

But not just yet. Another shock cut throws us back into the bayous at night, revealing a wild-eyed Edward James Olmos and a creepy, inbred-looking Colin Hanks. They're talking about snakes. Yes, snakes. In the bayous. Seriously. And then, just as abruptly, we return to Dexter’s high school reunion. Anyone who ever ingested hallucinogens might have wondered if some terrifyingly random flashback had just crawled into their TV. But no — this is how late-season "Dexter" plays, like a random cover-band version of a show whose weird originality we'd grown to love.

Back at the reunion, Dex rules. The guys dig the cool blood-spattered dude they see on TV all the time. The gals can’t resist the combination of Dex's steely, detached demeanor and proximity to death. Actually, I totally made that last sentence up—I have no idea why the women dig him. Dexter’s dad’s ghost (James Remar) appears to explain to Dex that what is occurring is “popularity,” and that Dex must carpe diem the hell out of it. So Dex goes out there and brags for the benefit of the dudes and eventually scores a blow job from a dumb blond named Heidi. Then he dances.

You may have a few questions. For instance: What happened with Quinn (Desmond Harrington) and the awful tension between his well-earned mistrust of Dexter and his love of Deb, to say nothing of the creeping sense that Deb may have seen Dexter do something unseemly in last year’s finale? Hey, I was wondering that, too. But no — this version of "Dexter" ignores such things so it can spend several minutes setting up a justification for introducing a bleached blond indie hipster girl to work with Masuka (C. S. Lee). The whole point of the jock imbroglio is to get him on Dexter’s table, where Dex can notice some Christian tats on his chest. And then -- you got it: discussions of whether God forgives us our trespasses, if evil is real, whether we can gain redemption, how God’s wrath manifests itself. The episode ends with that CGI snakes-on-the-beach moment, wherein a floater body’s stitches break open to reveal black wigglers where his intestines used to be.

It’s an old school "Dexter" gross-out gag that has Deb yelling, “Holy-Franken-fuck!”  Carpenter can really sell a goofball obscenity. Unfortunately, the premiere doesn't end there, but with the baffling sight of Dexter claiming happiness and Olmos intoning, “It’s begun.” Here’s a prayer to next week’s episode not making that sound like such a gloomy pronouncement, to renewed emphasis on the core strength of Dex and Deb, and to "Dexter" behaving like "Dexter" again, for God's sake.