From Hannibal Lecter to Patrick Batemen, these fictional madmen terrify us because of their ability to seem normal 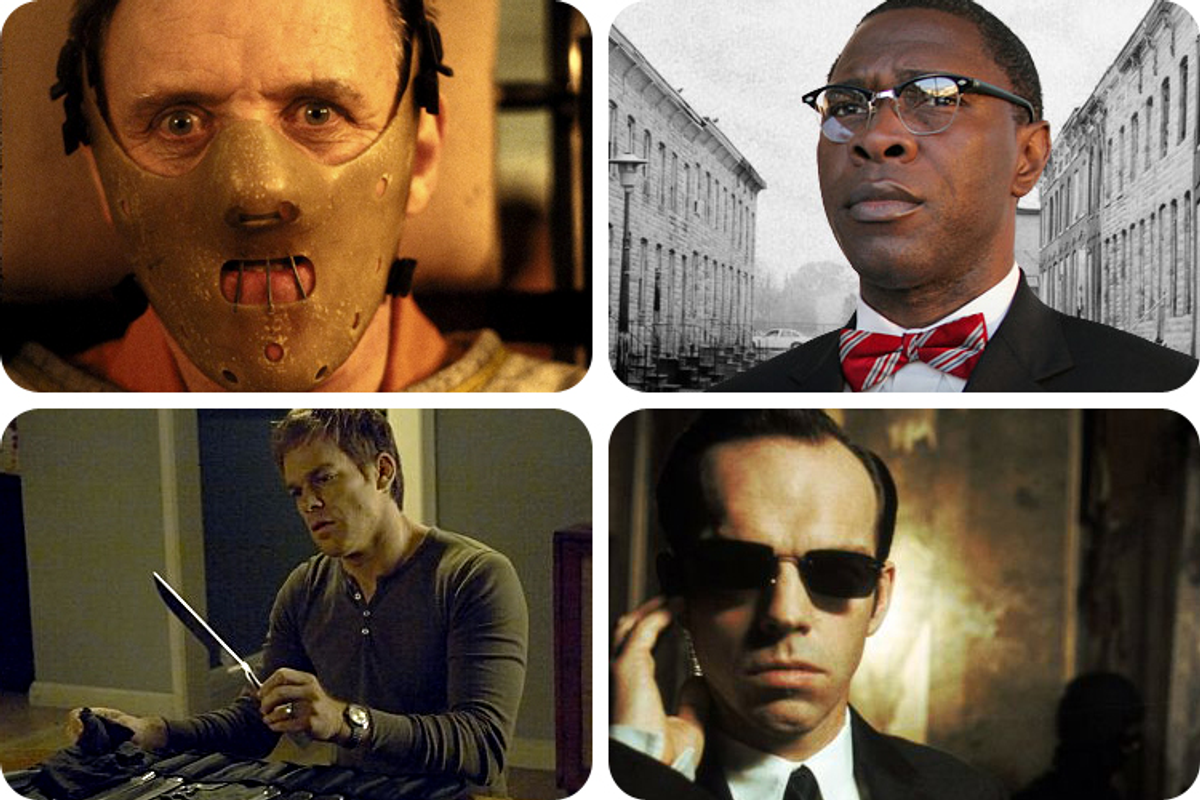 With only a few more episodes to go in "Breaking Bad's" penultimate season, the hit AMC show has succeeded in quietly vaulting Gustavo Fring into the Villain Hall of Fame. Once a minor part, this meth kingpin has been a hit not just because he is brilliantly depicted by Giancarlo Esposito -- but because of his seemingly contradictory life as both a stylish, upstanding public citizen and a stealth murderer.

If this profile sounds a bit familiar, that's because Fring's character isn't new. His image and demeanor makes him only the latest icon in the Villain Hall of Fame's special wing devoted to a timeless character: the Invisible Psychopath.

You know this particular monster well from contemporary film, television and literature -- he's the guy who periodically commits heinous and meticulously calculated acts of violence with ruthless precision, but shows little emotion and presents himself to the public as buttoned-up, urbane, super-smart and wholly rational. Rarely ever a muscular action hero type, this killer tends to be fairly average in weight and girth, implying that his sheer insanity and blood lust is able to overcome his physical limitations. In other words, he's the guy who nobody can believe is a monster because he puts on such a good front and because his psychopathy is invisible to the naked eye.

For all the idiosyncratic genius of Fring, he is only the latest in a long lineage of similarly frightening madmen. Here are the 10 other Invisible Psychopaths he now joins in the Villain Hall of Fame (warning: movie/TV/novel spoilers ahead!).

If Roger Ebert was correct in calling 1990's "Pacific Heights" a "horror film for yuppies," then Carter Hayes is a yuppie's worst nightmare.

The first thing to laud about this villain is the perfect casting call. Putting Michael Keaton, who typically plays cheeky good guys, in the role of a deranged con man bent on destroying a young couple visually reinforces the "anybody can be a dangerous lunatic" image so integral to the Invisible Psychopath archetype.

Second, while Carter Hayes is a madman, he wields most of his madness with a finely tuned sense of the law, often turning the legal system (in this case, tenant protection statutes and restraining orders) against the very victims he is terrorizing. This makes him even more terrifying than the average wild-eyed maniac, because he has the ability to blend into polite society at will.

Carrying himself more like an EU finance minister than a coldblooded murderer, Hans Gruber is an Invisible Psychopath with a specific mission: to execute anyone who gets in his way of stealing money. And not just any money -- big money from huge multinational corporations.

Mind you, his goal and target are important to his overall fame. This is not a petty street criminal or surly gang leader -- his understanding of the finance system, finely tailored suits, well-coiffed beard and general Euro-ness gives his character that intangible global-financial-elite flavor. For the audience, he represents something not all that different from a businessman or Wall Street trader. Indeed, two decades after the release of "Die Hard," Gruber still stalks our nightmares because we fear he might be our stockbroker.

Perhaps the greatest television antihero of recent years, Dexter Morgan has three distinct traits that make him such a harrowing figure: 1) His formal grounding in forensic science, 2) his attendant attention to scientific detail when killing his victims, and 3) his advantageous position within the very law enforcement apparatus that is supposed to stop maniacs like him.

In a sense, this latter quality is the active ingredient that makes the recipe of the entire "Dexter" franchise so compulsively addictive: In showing how a serial killer could infiltrate a police force and then use that infiltration as a means of pursuing his victims, the audience is forced to cogitate on the notion that this could be a plausible real-life scenario. (And we can hardly expect a reality-based Dexter to be as fastidious as to exclusively select fellow murderers as his chosen victims.)

As if "Dexter" was somehow short on Invisible Psychopaths, the show doubles down on the archetype in Season 4 with Arthur Mitchell -- otherwise known as the Trinity Killer.

As with Carter Hayes from "Pacific Heights," part of what makes him so terrifying is the casting choice. Though he has portrayed some villains in the past, John Lithgow is best known for his avuncular disposition from his years on "3rd Rock from the Sun" and "Harry and the Hendersons." Having him appear as a bizarre serial killer obsessed with ritualistic executions is jarring unto itself.

More jarring still is the juxtaposition of his public persona as the Everyman and his secret life as a bloodthirsty lunatic. As Lithgow noted in an interview with the Los Angeles Times:

There were these huge revelations like he's got a family, he's a churchgoer, he's a volunteer home builder, he's a horrible family man ... I think by far the scariest scene of the whole 12 episodes is Thanksgiving dinner when he's being the gentle patriarch: "We always like to say what we're thankful for," and you just know this is not going to end well. I even chuckled when I say, "Well, nobody said they were thankful for me." That tension between his nice outward demeanor and whatever's boiling inside him is really disturbing.

6. Martin Vanger ("The Girl with the Dragon Tattoo")

About halfway through "The Girl With the Dragon Tattoo," you sorta get the sense that Harriet's killer is going to be someone you haven't thought of yet -- an Invisible Psychopath lurking in plain sight. Eventually, you end up being correct -- you learn that the violent freak with the Gary Heidnik-esque dungeon in his basement is Martin Vanger, the prim and proper CEO of Vanger Industries who had earlier been pretending to help get to the bottom of the book's mystery.

While his murderous pathologies have nothing to do with the pursuit of money, Vanger is scary because of his Hans Gruber-ish qualities. He doesn't just seem Euro-corporate in style and dress, he lives it as a chief executive of a major Swedish company, implying that even well-known people in the public spotlight may be leading secret lives as sadomasochistic serial killers.

Typically, Hollywood's non-human villains aren't as scary as human ones because they don't seem that real. However, "The Matrix's" Agent Smith -- really just a visual projection of programming code -- manages to provide an epic sci-fi version of the Invisible Psychopath. He's able to do this because his mix of drab dress, barely hidden Britishness and pre-programmed blood lust somehow pulls off the seemingly impossible -- and horrifying -- combination of the early earnest Beatles and the Terminator.

Hewing to the old cyborg script, Agent Smith almost never shows emotion. Though we know that's because he's just a glorified computer program, his compulsive calmness in the face of mayhem only makes him all the more frightening.

As professional hit men for inner-city drug gangs go, Brother Mouzone is hardly standard. He is described in his official character bio on "The Wire's" website as "seem[ing] more like a banker or entrepreneur or scholar" thanks to "his trademark suit and bowtie, rimmed glasses, well-spoken demeanor and penchant for highbrow literature, public commentary and journalistic essay."

Yes, between hunting his prey and defending his allies' turf, this Invisible Psychopath is busy immersing himself in Harper's, the Atlantic, the New Republic and the Nation, reminding us that even the most soft-spoken and erudite scholars might put a cap in your ass if you cross them.

Let's start by stating the obvious: John Malkovich inevitably turns most roles he plays into Invisible Psychopaths, whether that's appropriate for the parts in questions or not.

One school of thought says that's the case because of Malkovich's inherent Malkovich-ness -- his low voice, Archie Bunker-ish looks and the way he often exudes smoldering anger, as if he is, in real life, an actual Invisible Psychopath. However, another, more convincing school of thought says it is because of his searing performance as Mitch Leary in "In the Line of Fire."

Leary is a would-be presidential assassin, who poses a serious danger precisely because his CIA past has given him the skills to be invisible and untraceable. Though he occasionally breaks Invisible Psychopath character with emotional outbursts, both his fastidious plotting and his masterful disguises more than make up for those momentary slip-ups.

2. Hannibal Lecter ("Silence of the Lambs")

If you saw "Silence of the Lambs," it's a good bet you can never hear the name "Clarice" uttered without getting chills. That's the filmic legacy of Dr. Hannibal Lecter -- an Invisible Psychopath who is so intensely creepy that he manages to unnerve us even though he's incarcerated and, thus, his psychopathy is longer even invisible.

That's right, this calm, cool and collected psychologist-cannibal is introduced to audiences as already locked up and/or in a straitjacket and therefore no longer a menace to society -- which should make him far less frightening. Yet, Anthony Hopkins adeptly overcomes that inherent disadvantage, somehow completely freaking us out from behind bars.

Perhaps, though, this is the true genius of the Hannibal Lecter version of the Invisible Psychopath. We not only retrospectively learn of his days as an invisible psychopath on the loose, but we see that everyone around him is terrified to even be in his presence, even though he is under lock and key.

The scariest part of "American Psycho's" Patrick Bateman is the very quality that makes him so invisible: He is a full-on blue blood with Ivy league pedigree and elite credentials. The construction of such a character was clearly a deliberate -- and terrific -- decision by author Bret Easton Ellis. Rather than taking the easy way out and manufacturing a big reveal that shows Bateman's pathology to be the product of some horrific childhood, Ellis gives us a serial killer whose craziness is actually a direct result of the very high-society culture that is supposed to squelch such antisocial behavior.