An American hasn't won in 20 years. The Academy finds our writers insular and self-involved -- and they're right 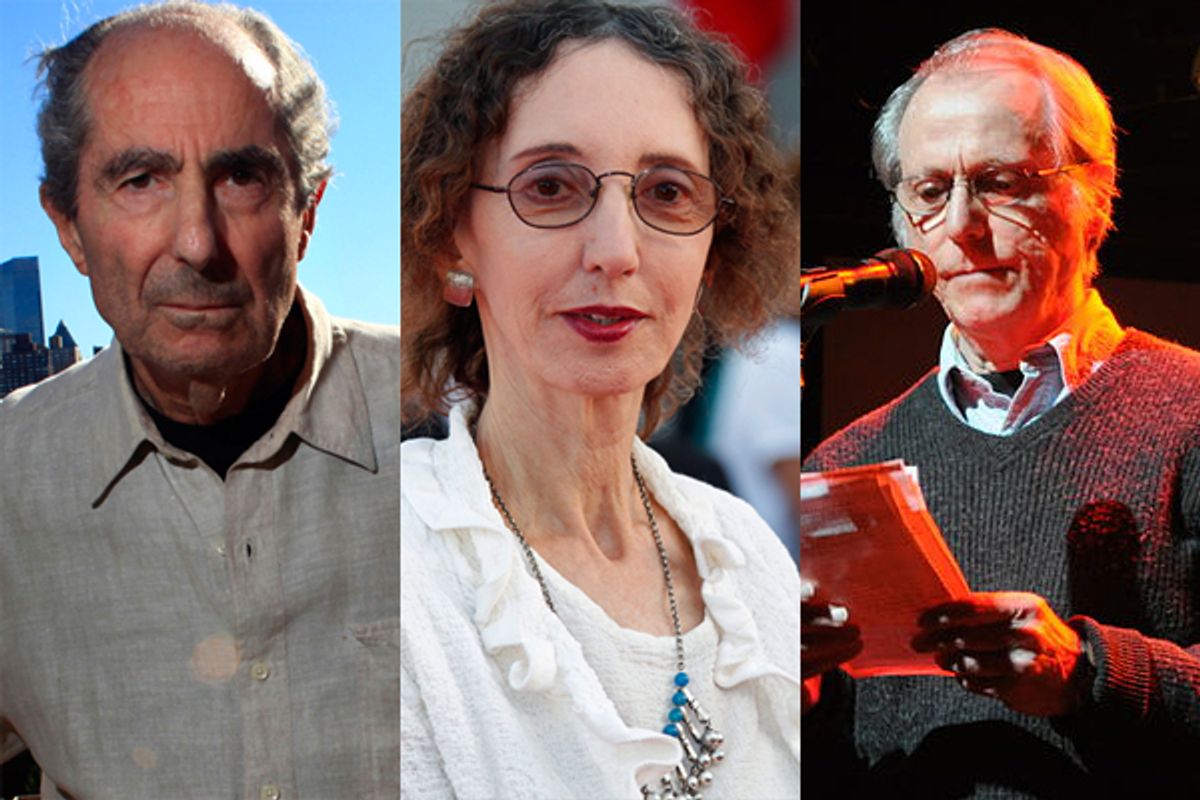 America wants a Nobel Prize in literature. America demands it! America doesn’t understand why those superannuated Swedes haven’t given one to an American since Toni Morrison in 1993. America wonders what they’re waiting for with Philip Roth and Thomas Pynchon. America wonders how you say "clueless" in Swedish.

OK, enough. But the literature Nobel will be announced this Thursday and if an American doesn’t win yet again, there will be the usual entitled whining -- the sound of which has been especially piercing since 2008, when Nobel Academy permanent secretary Horace Engdahl deemed American fiction "too isolated, too insular" and declared Europe "the centre of the literary world."

Boy, were we upset. Over at Slate, Adam Kirsch penned a scathing essay declaring that "the Nobel committee has no clue about American literature," arguing that Philip Roth should have won the prize. New Yorker editor David Remnick said, "You would think that the permanent secretary of an academy that pretends to wisdom but has historically overlooked Proust, Joyce and Nabokov, to name just a few non-Nobelists, would spare us the categorical lecture." He added John Updike (then living) and Don DeLillo to the mix of worthy laureates.

It’s true that the Academy, like any body of judges, has made some ill-informed decisions. And they’ve not done themselves any favors with some George W. Bush-era selections that plainly had more to do with politics than literature.

In 2005, British playwright Harold Pinter fulminated during his Nobel lecture about "the crimes of the United States" with all the embarrassing authority of a college freshman who just discovered Howard Zinn. In 2007, the prize was given to South African novelist Doris Lessing, who called 9/11 "neither as terrible nor extraordinary as [Americans] think."

That only fed the vitriol directed at Stockholm, obscuring a valid point about American letters: We’ve become an Oldsmobile in a world yearning for a Prius. Our paint is flaking. Nobody wants our clunkers.

Stockholm has been trying to tell us this for a long while, and we would do well to listen. Between 1950 and 1959, every one of the 10 Nobel winners was a European male. Between 2000 and 2009, three women won the prize, as well as five non-Europeans. They have given it to Caribbean poets and Chinese absurdists. An American-born male hasn’t won since John Steinbeck in 1962. The last white American male to win the prize was Joseph Brodsky in 1987 -- and though he wrote in English, his poetic training and intellectual sensibility are purely those of the Soviet émigré he was. Saul Bellow was born in Canada.

And yet here are the Americans who could win it this year, according to online oddsmakers Ladbrokes (in order of decreasing likelihood): Thomas Pynchon, Philip Roth, Cormac McCarthy, Joyce Carol Oates and Don DeLillo. Ladbrokes suggests they will most likely lose to front-runner Adonis, the Syrian poet who has the favorable breeze of the Arab Spring behind him. Swedish author Tomas Transtromer follows at 6-1, with Japanese novelist Haruki Murakami third, at 8-1.

But if we don’t win yet again, we are at fault. America needs an Obama des letters, a writer for the 21st century, not the 20th -- or even the 19th. One who is not stuck in the Cold War or the gun-slinging West or the bygone Jewish precincts of Newark -- or mired in the claustrophobia of familial dramas. What relevance does our solipsism have to a reader in Bombay? For that matter, what relevance does it have in Brooklyn, N.Y.?

The critical establishment was split on the award to Toni Morrison, but the Nobel Academy knew precisely what it was doing when it cited her "visionary force, [which] gives life to an essential aspect of American reality." You struggle through "Beloved," but you reach an understanding you didn’t have before. Can you honestly say that about Oates’ "We Were the Mulvaneys"?

Of the Americans thought to be on the long list, only Pynchon has written a big novel of big ideas -- but it’s been 38 years since "Gravity’s Rainbow," and his career since then has been a chiaroscuro patchwork of brilliance ("Mason & Dixon") and frustrating arcana ("Against the Day").

Four years after Morrison won the Nobel, David Foster Wallace predicted the current rut in which our literature finds itself in a New York Observer evisceration of John Updike’s "Toward the End of Time." Though he took particular issue with Updike’s autumnal output, Wallace parceled blame to all of the Great Male Narcissists, with their hermetic concerns and insular little fictions. The following is Wallace’s estimation of Updike, but it could just as easily be said about anyone else in the postwar American pantheon: "The very world around them, as beautifully as they see and describe it, seems to exist for them only insofar as it evokes impressions and associations and emotions inside the self."

Our great writers choose this self-enforced isolation. Worse yet, they have inculcated younger generations of American novelists with the write-what-you-know mantra through their direct and indirect influence on creative programs. Go small, writing students are urged, and stay interior. Avoid inhabiting the lives of those unlike you -- never dream of doing what William Styron did in "The Confessions of Nat Turner," putting himself inside the impregnable skin of a Southern slave. Avoid, too, making the kinds of vatic pronouncements about Truth and Beauty that enticed all those 19th-century blowhards.

As Bret Anthony Johnson, the director of the creative writing program at Harvard, noted in a recent Atlantic essay, our focus on the self will be our literary downfall, depriving literature of the oxygen on which it thrives: "Fiction brings with it an obligation to rise past the base level, to transcend the limitations of fact and history, and proceed skyward." This sentiment is a sibling to Wallace’s anger -- and both have a predecessor in T.S. Eliot’s 1919 essay "Tradition and the Individual Talent," where he called art "a continual extinction of personality."

The rising generation of writers behind Oates, Roth and DeLillo are dominated by Great Male Narcissists -- even the writers who aren't male (or white). Jhumpa Lahiri is a Great Male Narcissist whose characters tend to be upper-middle-class Indian-Americans living in the comfortable precincts of Boston or New York. Swap the identity to Chinese-American, move the story a couple of generations back on the immigrant’s well-trod saga, and you have Amy Tan. Colson Whitehead started promisingly with "The Intuitionist" and "John Henry Days" but his last novel, "Sag Harbor," was little more than the bourgeoisie life made gently problematic by the issue of race. Jonathan Safran Foer is a narcissist disguised as a humanist. To his credit, Jonathan Franzen doesn’t even pretend.

That makes for a small literature, indeed. The following are words from citations for recent winners and runners-up of the Pulitzer Prize for fiction, inarguably our most prominent commendation for a novelist: tender, warmth, heartbreaking, celebration, polished and sensuous. It’s all small-bore stuff, lack of imagination disguised as artistic humility.

Just look back to 2008, when the slight "Olive Kitteridge" won the Pulitzer, but the Irish-Turkish writer Joseph O’Neill told the story of America in "Netherland" with far more eloquence, insight and humor than an American writer had in more than a decade.

That’s not to say our literature is barren. Dave Eggers has written a novel about the Lost Boys of Sudan, "What Is the What," and a fine "nonfiction novel" about Hurricane Katrina, "Zeitoun." Best of all, his 826 reading centers have been a wholly selfless bid to get poor children reading and writing in eight cities. Then there is Aleksandar Hemon, son of Chicago and Sarajevo, who writes the kind of fiction that still seeks to span worlds. Johnston quotes him in the Atlantic: "I reserve the right to get engaged with any aspect of human experience, and so that means that I can -- indeed I must -- go beyond my experience to engage. That’s non-negotiable."

Maybe it’s the same story as in politics and industry: America, once great, has been laid low. The difference is that great art needs no tariffs, no financial stimuli, no elections or military campaigns. It only requires courage -- though a courage of a special kind -- to see beyond oneself, to speak across both space and time via what Ralph Ellison once called "the lower frequencies."

Indeed, compare the Pulitzer-winning descriptions with these words pulled from the citations of recent Nobel Prize-winners: Revolt, visionary, clash, oppression, subjugating, outsider, barbaric, suppressed. And lastly, the one word that seems most elusive to our writers today, so much so that I fear we've become afraid of it: universal.

Alexander Nazaryan, a member of the editorial board of the N.Y. Daily News, has written about culture for the New York Times, the New Republic and the Village Voice, among  other publications.