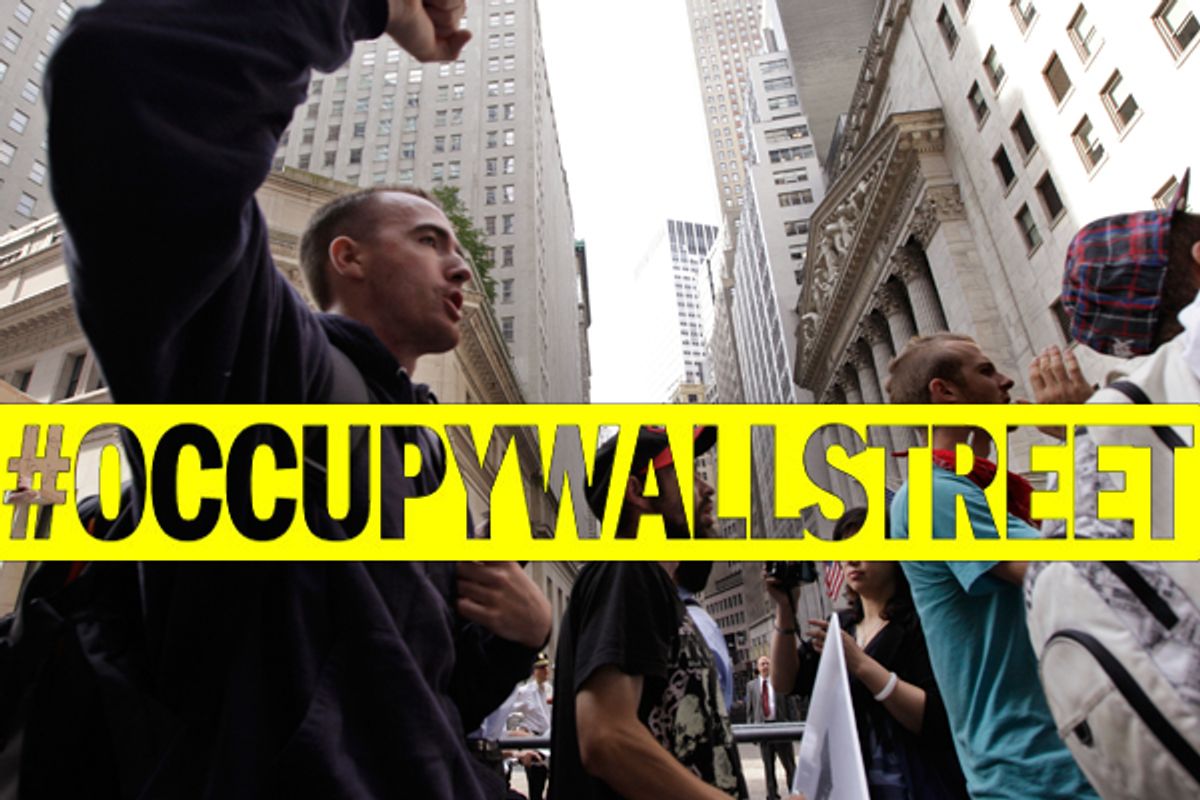 In July Adbusters, a Vancouver-based publication known for its incisive critiques of capitalism, included a poster in that month's magazine that read simply:

In response to the call, several loose-knit groups of organizers got involved and hundreds of people showed up on Wall Street on Sept. 17. A few weeks later, Occupy Wall Street is now spreading around the country and attracting intense interest from the media.

I spoke to Adbusters co-founder and editor in chief Kalle Lasn about the practical and ideological origins of the movement and about the continuing debate over its demands. The following transcript of our conversation has been edited for length.

You issued the original call to occupy Wall Street back in July. How did that come about and what was the thinking behind it?

It was a poster that we put in the middle of the July edition of Adbusters magazine and a listserv that we sent out to our 90,000-strong culture-jammers network around the world. It was also a blog post on our website. For the last 20 years, our network has been interested in cultural revolution and just the whole idea of radical transformations.

After Tunisia and Egypt, we were mightily inspired by the fact that a few smart people using Facebook and Twitter can put out calls and suddenly get huge numbers of people to get out into the streets and start giving vent to their anger. And then we keep on looking at the sorry state of the political left in the United States and how the Tea Party is passionately strutting their stuff while the left is sort of hiding somewhere. We felt that there was a real potential for a Tahrir moment in America because a) the political left needs it and b) because people are losing their jobs, people are losing their houses, and young people cannot find a job. We felt that the people who gave us this mess -- the financial fraudsters on Wall Street -- haven't even been brought to justice yet. We felt this was the right moment to instigate something.

One Adbusters editor was quoted saying the role of the magazine in this is "philosophical." Can you define the philosophy behind this?

We are not just inspired by what happened in the Arab Spring recently, we are students of the Situationist movement. Those are the people who gave birth to what many people think was the first global revolution back in 1968 when some uprisings in Paris suddenly inspired uprisings all over the world. All of a sudden universities and cities were exploding. This was done by a small group of people, the Situationists, who were like the philosophical backbone of the movement. One of the key guys was Guy Debord, who wrote "The Society of the Spectacle." The idea is that if you have a very powerful meme -- a very powerful idea -- and the moment is ripe, then that is enough to ignite a revolution. This is the background that we come out of.

1968 was more of a cultural kind of revolution. This time I think it's much more serious. We're in an economic crisis, an ecological crisis, living in a sort of apocalyptic world, and the young people realize they don't really have a viable future to look forward to. This movement that's beginning now could well be the second global revolution that we've been dreaming about for the last half a century.

In the original call to action, Adbusters asked that 20,000 flood into lower Manhattan and set up tents. The piece also said:

Once there, we shall incessantly repeat one simple demand in a plurality of voices. Tahrir succeeded in large part because the people of Egypt made a straightforward ultimatum – that Mubarak must go – over and over again until they won. Following this model, what is our equally uncomplicated demand?

I sat in on discussions down in Zuccoti Park where this very issue was being discussed. But obviously there is no single demand yet. Do you think it has developed differently than the vision outlined in Adbusters?

Originally we thought that the idea of one demand was very important. There's been a debate going on between the one-demand vision and this other vision that is playing itself out right now on Wall Street. I think it's a wonderful debate and there are good pointers on both sides. Currently this leaderless, demandless movement -- that is still growing in leaps and bounds -- I think it is fine the way it is. After these assemblies have been conducted and debates have been had in cities all around America, demands will emerge. These demands will be specific things like reinstatement of the Glass-Steagall Act or a 1 percent tax on financial transactions or the banning of high-frequency trading. We will get into specifics, just give us time.

I think this whole thing will stay fairly amorphous through the next big event on Oct. 6 in Washington. Then it will gain global momentum on Oct. 15 when the Europeans have their big moment in the sun. I think the big global catalytic moment may well happen on Nov. 3 or Nov. 4 when the G-20 is meeting in France. In the month following that these demands of ours will emerge and we may well find millions of people marching around the world.

Can you speculate about how these demands will emerge? Do you see leaders or spokespeople emerging? How do you see it playing out as a process?

The political left has always had problems with this. All my life I've been sitting in meetings where loony guys get up and talk, and eventually very little happens. This is the kind of weight that is dragging the political left down. We don't seem to have the clarity of vision that for example the Tea Party has. This may be our undoing again. This whole movement may fizzle out in a bunch of loony lefty kind of bullshit.

Then again, at the same time, I've been in daily touch with dozens and dozens of people in cities all around the world who are involved in this. And I have a feeling that because of the Internet and a different kind of mentality that young people have, a horizontal way of thinking about things, this movement may not just come up with some really good demands and put incredible people pressure on our politicians, but a more beautiful thing may come out of this movement: a new model of democracy, a new model of how activism can work, of how the people can have a radical democracy and have some of their demands met. This new model may well be a new kind of a horizontal thing that in some strange way works like the Internet works.

David Graeber, an anthropologist and Adbusters contributor as well as one of the original organizers of the protest, told the Washington Post the other day:

You’re creating a vision of the sort of society you want to have in miniature. And it’s a way of juxtaposing yourself against these powerful, undemocratic forces you’re protesting. If you make demands, you’re saying, in a way, that you’re asking the people in power and the existing institutions to do something different. And one reason people have been hesitant to do that is they see these institutions as the problem.

Isn't that a fundamentally different model than making one single demand?

This is the deeper level of the debate that is going on within this movement. I think that as this movement grows, it will have room for different things. I think it's wonderful that people are doing exactly what Graeber describes and providing an example of how a democracy can work, sort of creating a mini-democracy within Zuccoti Park. But that doesn't stop other people from actually starting to make demands. I don't see any reason why we can't have some people who really want a 1 percent Tobin tax and why those people can't be putting pressure on the G-20 in November while at the same time the people in Zuccoti Park and other cities are providing this inspiring example of real democracy. I don't think that the two are mutually exclusive.