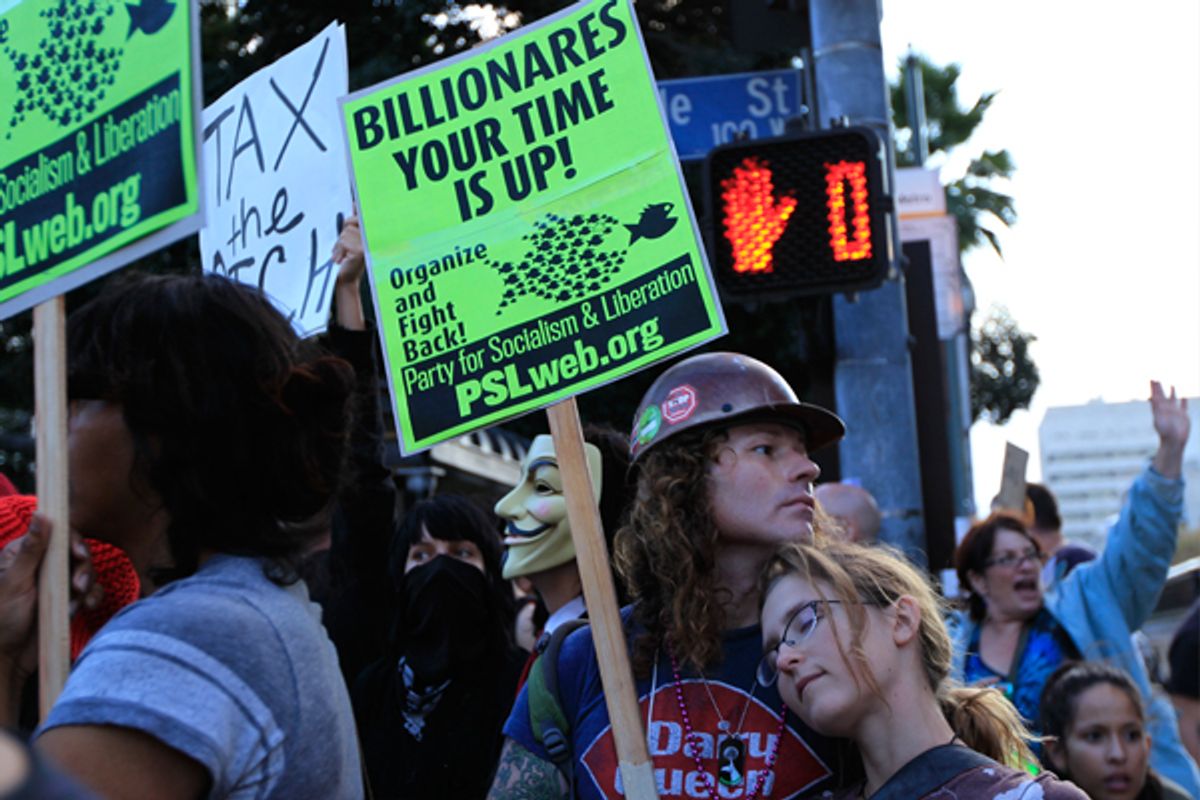 It's official: Occupy Wall Street has now become so large that the message makers of the conservative movement have set their sights on the growing protest movement.

Out of some combination of contempt and opportunism, Fox News along with right-wing pundits and magazine writers are calling out Occupy Wall Street as stupid, juvenile, and dangerous.

The strain of deep contempt is best expressed in this column by National Review editor Rich Lowry, titled "The Left's Pathetic Tea Party":

Occupy Wall Street is not a real answer. It is both more self-involved and more ambitious than the Tea Party. It represents an ill-defined, free-floating radicalism. Its fuzzy endpoint is a “revolution” no one can precisely describe, but the thrust of which is overturning our system of capitalism as we know it. If elected Democrats dare associate their sagging party with this project, they need immediately to consult their nearest psychiatrist and political consultant, in that order.

Abe Greenwald at Commentary expands on the idea that the protest movement will hurt the Dems:

These leftists are so reckless that an extended, high profile “occupation” movement of national reach would bury liberalism months before November 2012. It would, in short, function for Democrats exactly as Democrats had hoped (in vain) that the Tea Party would function for Republicans in 2010. In unhinged “Occupiers,” conservatives would find an easy and clean target to run against and destroy. What’s more, this would force Barack Obama either to publicly walk back all the class-warfare rhetoric that the protesters have taken to heart or to sink as one of their number. He has long nurtured dual personae, vacillating in political style between inflammatory community-organizer and conciliatory high-office holder. A large national Occupier movement would require him to end that game once and for all.

Appearing on Fox Business yesterday, Ann Coulter said the rhetoric of sharing and equality at Occupy Wall Street "is always the beginning of totalitarianism."

Fox News, unsurprisingly, has been devoting more and more time to trying to discredit the protesters. Here's a Monday segment with Steve Moore of the Wall Street Journal editorial board, who calls the protests a "scary" attack on capitalism:

"As that one dumb woman was saying, 'if only rich people would share their wealth, we'd all be prosperous.' Look you don't get prosperous by taking other people's money, you get prosperous by producing," says Moore, apparently forgetting the multi-trillion-dollar bank bailouts of the last few years that represent one of the biggest grievances of the protesters.

For an object lesson in the sort of facile journalistic cherry-picking Fox has been engaging in, here's an interview the network conducted but did not air: