The Republican no one wants to love 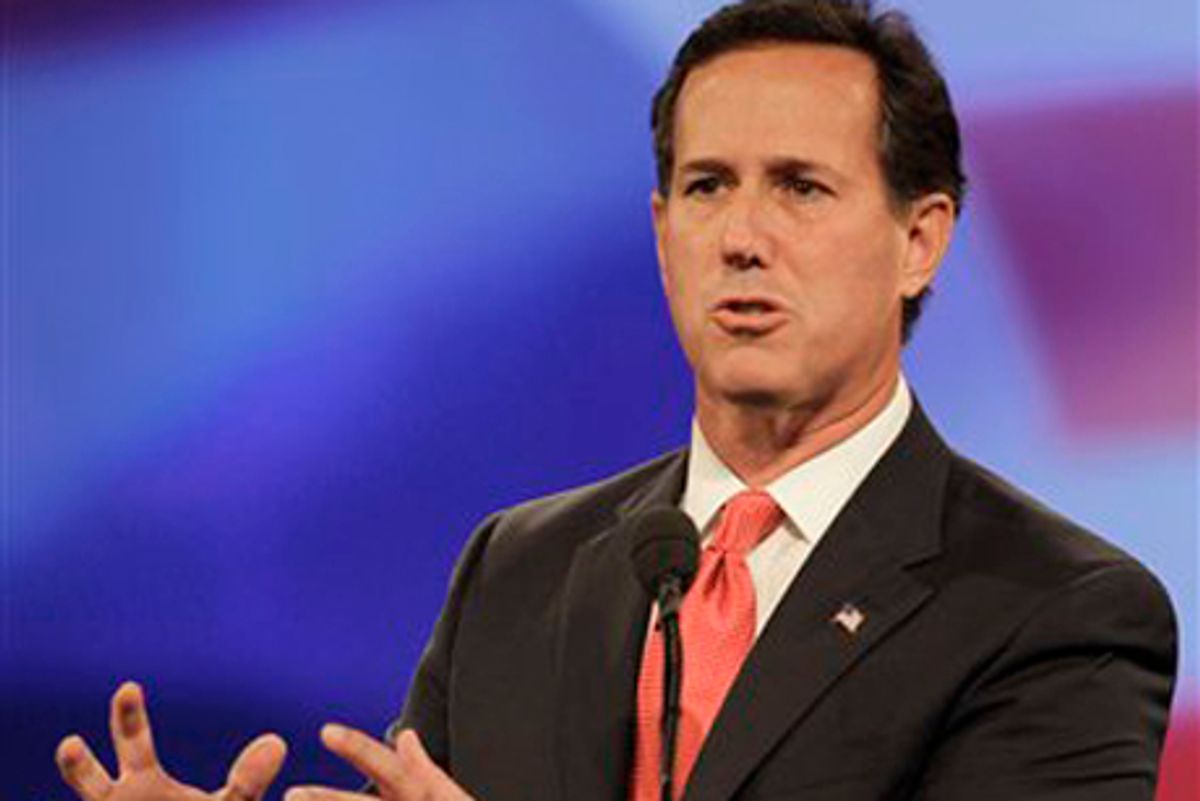 The second major national poll since Rick Perry's ghastly Orlando, Fla., debate performance came out overnight, and the headline is that his slide is very much continuing.

For the first five weeks after he launched his campaign, the Texas governor led every GOP poll, often by double digits, but in the first post-Orlando survey, he fell to second place, three points behind Mitt Romney. And in the new poll, from ABC News and the Washington Post, Perry is down to 17 percent, now 8 points behind Romney and tied for second with ... Herman Cain.

Perry's woes, Cain's resurgence and Romney's luck will generate plenty of discussion today. But this might also be a good moment to pause and reflect on something else that the poll hints at: the abject futility of Rick Santorum's presidential campaign -- something that's more remarkable (and, if you're the former Pennsylvania senator, maddening) than you might think.

Sure, in the grand scheme of things, there's not much surprising about the fact that Santorum is currently the preferred choice of 2 percent of likely Republican voters. From the beginning, everyone knew his campaign was a long shot. If you'd said a year ago that Santorum would enter October 2011 running dead last and barely registering in national polls, that probably would have sounded about right.

But this doesn't do justice to Santorum's plight. Because no one a year ago knew that the GOP race would be defined by the chaotic, unstructured and almost random volatility that we've seen -- volatility that has allowed virtually every candidate in the race to enjoy at least a few weeks of apparent momentum in the polls. Except for Santorum. Just consider what the others have been able to celebrate this year:

And then there's Santorum, the only one of the candidates to participate in all of the GOP debates and still not show any life. He's at 2 percent in the ABC/Washington Post survey, almost exactly where he was last month and the month before that. In the Fox poll released last week, he was at 4 percent. And his fortunes are no better in the key early states: He's averaging 4.3 percent in Iowa (where he's never broken double digits), received 1 percent in the latest New Hampshire poll, and couldn't even crack 3 percent in a recent South Carolina survey.

You'd think that, even by accident, a few polls would have moved in Santorum's direction at some point in the past year. As Cain and Bachmann and Gingrich (and maybe even Huntsman, for God's sake) have shown, it really doesn't take much more than a strong-seeming debate performance. And Santorum is actually a very solid debater.  As the National Review's Katrina Trinko put it last week, "his razor-sharp rejoinders and fearless attacks have won him a disproportionate influence at the debates." He's lectured Ron Paul on foreign policy, slammed Rick Perry on HPV vaccines and illegal immigration, and decried Hunstman's call to bring the troops back from Afghanistan.

His debate performances have yielded some positive press coverage, especially from some Republican-friendly sources. Byron York declared him the winner of the Orlando debate, and Washington Post blogger Jennifer Rubin has been pleading his case for a few weeks now. There was also an A1 New York Times profile this past Sunday. And yet there's just no sign that Republican voters, as obviously hungry as they are for an alternative to Perry and Romney, are even willing to flirt with Santorum.

Why is this? A while back, I made the case that his lopsided 2006 defeat in Pennsylvania had stamped Santorum as a "loser" to opinion-shaping Republicans -- that even if they generally like him and agree with him, they're conditioned to view his White House campaign as the political equivalent of a midlife crisis, and that there's just no breaking through. As Trent Lott put it in the New York Times piece on Sunday: "A lot of people say, ‘Well, if you lost reelection in your own state when you’re the incumbent, how can you turn that into a victory in a nomination for president?'"

Or maybe there's something else about Santorum that just rubs the average Republican the wrong way, or causes the average Republican to ignore him. Whatever the reason, it's got to be maddening for Santorum. He spent two terms in the Senate and he's nearly killing himself doing all the things a presidential candidate is supposed to do. Plus, he's running in a Republican race that's almost comically wide open. But his party's voters continue to send him the same message over and over: Anyone but you.